Bacterial ClpB is an ATP-dependent Hsp100 chaperone that reactivates aggregated proteins in cooperation with the DnaK chaperone system and promotes survival of bacteria under stress conditions. A large number of publications also indicate that ClpB supports the virulence of bacteria, including a pathogenic spirochaete Leptospira interrogans responsible for leptospirosis in both animals and humans. However, the exact role of ClpB in bacterial pathogenicity remains poorly characterized. It can be assumed that ClpB, due to its role as the molecular chaperone, mediates refolding of essential bacterial proteins, including the known virulence factors, which may become prone to aggregation under infection-induced stresses. In this study, we identified putative substrates of ClpB from L. interrogans (ClpBLi). For this purpose, we used a proteomic approach combining the ClpB-Trap affinity pull-down assays, Liquid chromatography-tandem mass spectrometry (LC-MS-MS/MS), and bioinformatics analyses. Most of the identified proteins were enzymes predominantly associated with major metabolic pathways like the tricarboxylic acid (TCA) cycle, glycolysis–gluconeogenesis and amino acid and fatty acid metabolism. Based on our proteomic study, we suggest that ClpB can support the virulence of L. interrogans by protecting the conformational integrity and catalytic activity of multiple metabolic enzymes, thus maintaining energy homeostasis in pathogen cells. View Full-Text
Keywords: bacterial pathogens; ClpB; Leptospira interrogans; leptospirosis; molecular chaperones bacterial pathogens; ClpB; Leptospira interrogans; leptospirosis; molecular chaperones
►▼ Show Figures 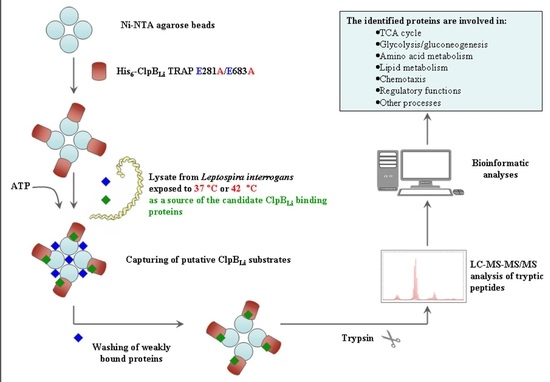