Angelman syndrome (AS, MIM 105830) is a rare neurodevelopmental disorder affecting 1:10–20,000 children. Patients show moderate to severe intellectual disability, ataxia and absence of speech. Studies on both post-mortem AS human brains and mouse models revealed dysfunctions in the extra synaptic gamma-aminobutyric acid (GABA) receptors implicated in the pathogenesis. Taurine is a free intracellular sulfur-containing amino acid, abundant in brain, considered an inhibiting neurotransmitter with neuroprotective properties. As taurine acts as an agonist of GABA-A receptors, we aimed at investigating whether it might ameliorate AS symptoms. Since mice weaning, we orally administered 1 g/kg/day taurine in water to Ube3a-deficient mice. To test the improvement of motor and cognitive skills, Rotarod, Novel Object Recognition and Open Field tests were assayed at 7, 14, 21 and 30 weeks, while biochemical tests and amino acid dosages were carried out, respectively, by Western-blot and high-performance liquid chromatography (HPLC) on frozen whole brains. Treatment of Ube3am−/p+ mice with taurine significantly improved motor and learning skills and restored the levels of the post-synaptic PSD-95 and pERK1/2-ERK1/2 ratio to wild type values. No side effects of taurine were observed. Our study indicates taurine administration as a potential therapy to ameliorate motor deficits and learning difficulties in AS. View Full-Text
Keywords: Angelman syndrome; taurine oral administration; motor and learning recover of deficit Angelman syndrome; taurine oral administration; motor and learning recover of deficit
►▼ Show Figures 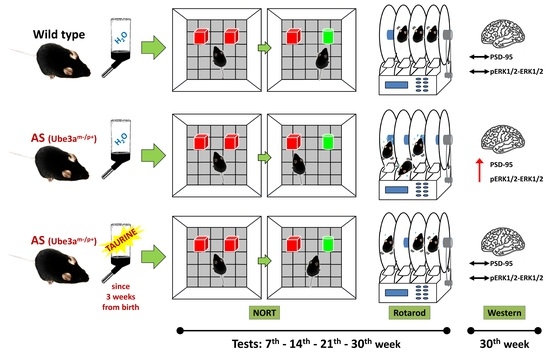