Feed efficiency is an economically crucial trait for cultured animals, however, progress has been scarcely made in the genetic analyses of feed conversion efficiency (FCE) in fish because of the difficulties in measurement of trait phenotypes. In the present investigation, we present the first application of RNA sequencing (RNA-Seq) combined with differentially expressed genes (DEGs) analysis for identification of functional determinants related to FCE at the gene level in an aquaculture fish, crucian carp (Carassius auratus). Brain tissues of six crucian carp with extreme FCE performances were subjected to transcriptome analysis. A total of 544,612 unigenes with a mean size of 644.38 bp were obtained from Low- and High-FCE groups, and 246 DEGs that may be involved in FCE traits were identified in these two groups. qPCR confirmed that genes previously identified as up- or down-regulated by RNA-Seq were effectively up- or down-regulated under the studied conditions. Thirteen key genes, whose functions are associated with metabolism (Dgkk, Mgst3 and Guk1b), signal transduction (Vdnccsa1b, Tgfα, Nr4a1 and Tacr2) and growth (Endog, Crebrtc2, Myh7, Myh1, Myh14 and Igfbp7) were identified according to GO (Gene Ontology) and KEGG (Kyoto Encyclopedia of Genes and Genomes) annotations. Our novel findings provide useful pathway information and candidate genes for future studies of genetic mechanisms underlying FCE in crucian carp. View Full-Text
Keywords: crucian carp (Carassius auratus); feed conversion efficiency; brain; differentially expressed genes; RNA-Seq crucian carp (Carassius auratus); feed conversion efficiency; brain; differentially expressed genes; RNA-Seq
►▼ Show Figures 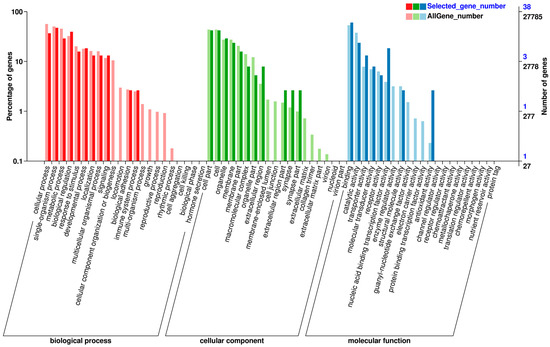