Doxorubicin is a widely used and highly successful anticancer chemotherapeutic drugs agent. Unfortunately, its clinical use is critically limited by its cumulative cardiotoxicity [1]. It is well established that cancer patients undergoing doxorubicin treatment are susceptible to cardiac anomalies, including hypotension, tachycardia, arrhythmia, and transient depression of left ventricular function [2]. Therefore, a major challenge in managing cancer patients treated with doxorubicin is to minimize doxorubicin’s cardiotoxic effects without compromising its antitumor properties.
Autophagy is a conserved process aimed at maintaining cell and tissue homeostasis by degrading and recycling macromolecules, organelles and nutrients. Previous studies have shown that dysregulated autophagy is associated with a variety of heart diseases including ischemia/reperfusion injury, cardiac hypertrophy, cardiac aging, and heart failure [3]. However, the accumulation of oxidized and damaged macromolecules and organelles induced by doxorubicin can lead to autophagy in cardiac myocytes [4]. It has been reported that the suppression of autophagy could attenuate doxorubicin-induced cardiotoxicity [5,6,7]. In addition, pharmacologic inhibition of post- doxorubicin (DOX) autophagy by 3-methyladenine protected cardiac cells from DOX toxicity [4]. Thus, decrease of autophagy could be a potential strategy for the treatment of DOX-induced cardiomyopathy.
The endoplasmic reticulum (ER) is a membranous organelle supporting many processes required by almost every mammalian cell, including cardiomyocytes. Various factors that interfere with ER functions (protein folding, lipid and sterol synthesis, and Ca2+ homeostasis) lead to ER stress via the activation of complex cytoplasmic and nuclear signaling pathways collectively termed the unfolded protein response (UPR) [8]. The UPR initially activates three major signal transducers, viz. type I transmembrane ER-resident protein kinase (PERK), activating transcription factor 6 (ATF6), and Inositol-requiring enzyme 1 (IRE1) [9]. Recent study has revealed that the perturbation of UPR is implicated in the pathophysiology of doxorubicin-induced cardiotoxicity [10,11]. DOX inactivates glucose-regulated protein 78 (GRP78) leading to the activation of ATF6 and IRE1, then cause cardiomyocyte apoptosis. Moreover, the administration of the chemical ER chaperone 4-phenylbutyrate alleviated cardiac apoptosis and dysfunction induced by doxorubicin. This suggests that inhibition of endoplasmic reticulum stress is a feasible way to improve DOX-induced cardiotoxicity.
Ginsenoside Rg1, one of the main components of ginseng, has been proved to counteract a variety of heart diseases [12,13,14]. In addition, its myocardial protective effect is related to the regulation of autophagy [15]. In addition, ginsenoside Rg1 can inhibit endoplasmic reticulum stress in Alzheimer′s disease and diabetes rat heart [16,17]. Latest research shows that oral administration of Rg1 decreased the cardiac cell apoptosis caused by doxorubicin and improved the cardiac function [18]. However, whether ginsenosides can improve DOX-induced cardiotoxicity by inhibiting autophagy and endoplasmic reticulum stress remains unknown. In a mice model of DOX-induced cardiomyopathy, we tested the hypothesis that ginsenoside Rg1 could alleviate DOX-induced cardiomyopathy by modulating autophagy and endoplasmic reticulum stress.

As shown in Figure 1, echocardiography images and quantitative analysis of the doxorubicin group demonstrated a significant impairment of left ventricular function expressed as ejection fraction (EF) and fractional shortening (FS) compared with the control group. Cotreatment with ginsenoside Rg1 with doxorubicin resulted in a remarkable improvement in EF and FS.

Hematoxylin-eosin (HE) results showed that DOX-treated hearts displayed myofibrillar degeneration and disruption when compared with normal control hearts (Figure 2). Ginsenoside Rg1 treatment can significantly improve the defects induced by DOX. In addition, Masson′s Trichrome staining showed that the cardiac fibrosis in DOX group mice increased compared with the normal control group. However, the myocardial fibrosis in the ginsenoside Rg1 group was lower than the DOX group.

Electron microscopic images of the DOX-treated hearts showed the formation of autophagosome. This was not obvious in both the normal control group and the Rg1 treatment group (Figure 3A). Microtubule-associated light chain 3 (LC3) was always utilized as an index of autophagy function. Compared with the normal group, an increase of conversion of LC3A to LC3B was observed in the DOX group. Cotreatment with Rg1 can suppress this conversion caused by DOX ((Figure 3B). Moreover, DOX can cause an increase in the expressions of autophagy related 5 (ATG5) and sequestosome 1 (P62) in mice heart. Also, Rg1 reduces the increase in the expressions of ATG5 and P62 caused by DOX (Figure 3B).

Consistent with previous reports [10], we confirmed that doxorubicin resulted in marked ER dilation in mouse hearts. Rg1 administration can reduce the ER dilation (Figure 4A). It was found that DOX could increase the contents of cleaved ATF6 and IRE1 by protein expression detection. In the Rg1 group, the expressions of cleaved ATF6 and IRE1 were lower than that in the DOX group (Figure 4B). In addition, Rg1 can prevent the decrease of expressions of spliced X-box binding protein 1 (XBP1s) and glutamine fructose-6-phosphate amidotransferase (GFAT1) caused by DOX (Figure 4B).

2.5. The Mechanisms of Rg1 to Improve Endoplasmic Reticulum Stress

2.6. Effects of Rg1 on the Autophagic Pathway Activated by Endoplasmic Reticulum Stress in Mice Hearts

As reviewed by Rashid et al., the endoplasmic reticulum signaling regulate autophagy mainly by mTOR and Beclin1 [20]. Compared with the normal group, the expression of phosphorylated pibosomal protein S6 kinase beta-1 (p-P70S6K), c-Jun N-terminal kinases (JNK1) and Beclin1 increased significantly. Administration of Rg1 significantly reversed the expression alterations of these proteins (Figure 6A). However, there was no significant difference in expression of family with sequence similarity of 134 member B (FAM134B) between all groups (Figure 6B).

All experiments and animal care in this study were conducted in accordance with the Provision and General Recommendation of Chinese Experimental Animals Administration Legislation and approved by the Science and Technology Department of Jiangsu Province (SYXK (SU) 2016-0011). Eight-week-old male wild-type C57BL/6J mice (20–22 g body weight) were obtained from Beijing Vital River Laboratory Animal Technology Co., Ltd. (Beijing, China). The mice were exposed to a 12 h light–12 h dark cycle at 22 ± 2 °C with relative humidity of 60% ± 5%. Food and water were supplied ad libitum. The mice were acclimatized for one week before the experiments.
Thirty mice were randomly divided into 3 groups (n = 10 each) as follows: the control group (C), doxorubicin group (DOX), and doxorubicin + Rg1 treatment group (Rg1). The mice in the DOX and DOX + Rg1 groups were injected intraperitoneally with 6 mg/kg of DOX every 3 days, four times total; the control mice received equal volume PBS. Rg1 (50 mg/kg/day, i.g.) was administered 7 days before the first DOX injection and continued until the termination of the study. A schedule of the experiments can be seen in Figure 1B.

After being washed with PBS, the hearts from the mice were fixed were fixed in 10% neutral-buffered formalin at room temperature for 24 h. Then heart tissues were embedded in paraffin, cut into 5 μm sections and stained with hematoxylin and eosin (H&E) to analyze the heart morphology. To evaluate the degree of myocardial fibrosis, heart samples were also stained with Masson′s trichrome. Sections were viewed and imaged with a Nikon Ts2R research microscope.

Total proteins were obtained from cardiac tissues as described [47]. Thirty micrograms of total protein were separated by SDS/PAGE and transferred to PVDF membrane. The membrane was then blocked with 5% bovine serum albumin for 2 h at room temperature and incubated at 4 °C overnight with primary antibodies. After three washings with odyssey blocking buffer, the membranes were incubated with secondary fluorescence anti-body (Odyssey, Lincoln, NE, USA) in TBS solution for 60 min at room temperature, then washed as above. After washing, immune reactive protein bands were detected by Odyssey SA (Li-cor, Lincoln, NE, USA) and quantified by Odyssey Image Studio 5.1.

In summary, the present work demonstrates that Rg1 administration can alleviate DOX-induced heart failure (Figure 7). The potential mechanism of its protective role is mediated by inhibition of excessive autophagy and ER stress. Our results indicate that Rg1 may attenuate DOX-induced ER stress by affecting the protein expressions of TIF1 and GRP78. In addition, the role of Rg1 in inhibiting autophagy may be related to its regulation of JNK1 and P70S6k. This suggests Rg1 as a potential agent to treat the cardiac damage of DOX.

Z.-M.X. conducted majority of the experiments and prepared the first draft of the manuscript. C.-B.L. and Q.-L.L. participated in data interpretation and helped to draft the manuscript. P.L. and H.Y. supervised the research work and proofread the manuscript.

This work was supported by the National Natural Science Foundation of China (81673592, 81722048, 81421005), and a Project Funded by the Priority Academic Program Development of Jiangsu Higher Education Institutions.

The authors confirm that this article content has no conflict of interest. 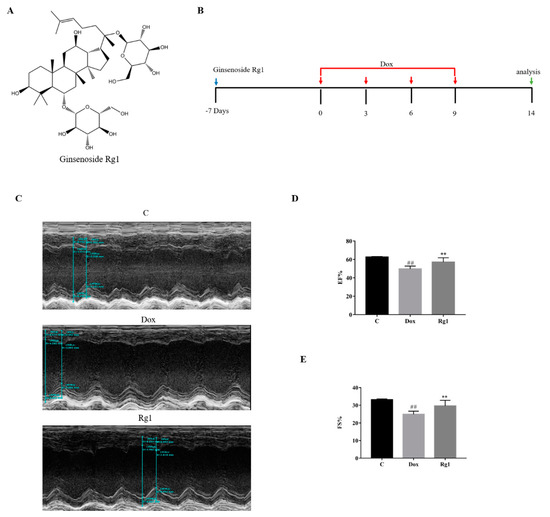 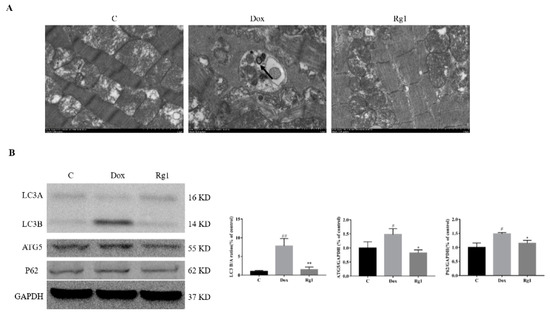