The cell proliferation in SLC27A4-knockdowned Hs578T and MDA-MB-231 was evaluated. In Hs578T, cell growth was inhibited after transfection with shSLC27A4#02 but not shSLC27A4#98 when compared to the vector control group (Figure 3a,b). In MDA-MB-231, relatively slower cells growth rate was observed in both shSLC27A4#02 and shSLC27A4#98-transfected groups (Figure 3c,d). It is interesting to note that the inhibitory effect on cell growth in both cells was associated with the inhibitory efficiency of SLC27A4 shRNAs (Figure 1c,g). This suggested that SLC27A4 is associated with enhancement of cell growth in breast cancer cells.

The cell cycle status in SLC27A4-silencing Hs578T and MDA-MB-231 was analyzed. The propidium iodide staining assay showed that decreasing cell population in G0/G1 phase and increasing cell population in G2/M phase in the shSLC27A4#02 group but not the shSLC27A4#98 group of Hs578T (Figure 4a). However, SLC27A4 silencing did not significantly affect the cell cycle in MDA-MB-231 (Figure 4b). The quantitative results are shown in Figure 4c,d. In addition, the regulator proteins of cell cycles were investigated in Hs578T. Figure 4e–g show that the protein expression levels of cyclin B1 and cyclin A2 significantly increased in the shSLC27A4#02 group.

The migration and invasion capacity of Hs578T and MDA-MB-231 was inhibited after silencing SLC27A4. EMT phenotype is associated with metastasis and invasion in cancer cells [17]. Increasing N-cadherin, vimentin, Slug, and α-smooth muscle actin (α-SMA) and decreasing E-cadherin are biomarkers of EMT signaling [17]. Therefore, the regulatory molecules of EMT introduction was investigated. In Hs578T, the protein expression levels of vimentin and Slug decreased in SLC27A4 silencing groups. The expression of α-SMA was not significantly changed (Figure 6a–d). In MDA-MB-231, the expression of N-cadherin, E-cadherin, Slug, and α-SMA was significantly affected in SLC27A4 silencing groups; however, the expression of vimentin was not changed. These results suggest that knockdown of SLC27A4 affected the regulatory molecules of EMT signaling pathways.

To the best of our knowledge, the detailed regulatory mechanism of SLC27A4 is still unknown in breast cancer. Therefore, the biological networks of SLC27A4 were evaluated by TCSBN database, which provided biological networks in various types of cancer and non-cancer tissues [18]. In this study, the interacting networks were drawn according to the top-25 genes with high co-expression correlation among normal and cancer tissues (Figure 7a,b). The results showed that most genes within interacting networks in breast cancer tissues were different from that in normal breast mammary tissues. Only three genes including Dolichol Kinase (DOLK), TruB Pseudouridine Synthase Family Member 2 (TRUB2), and Ubiquitin Related Modifier 1 (URM1) were identical between normal and cancer tissues. In order to determine whether the function of the these genes, these 25 genes in normal breast and breast cancer tissues were performed the functional annotation bioinformatics analysis through DAVID Bioinformatics Resources [19,20]. The results were shown in Supplementary Tables S1 and S2, respectively. The analysis showed that SLC27A4-correlated genes mainly involved in metabolic processes in normal breast tissues and in transport processes in breast cancer tissues. In top-25 SLC27A4 co-expression genes in breast cancer tissues, six genes including Solute carrier family 26 member 11 (SLC26A11), calcium activated nucleotidase 1 (CANT1), leucine rich repeat and sterile alpha motif containing 1 (LRSAM1), tubulin folding cofactor D (TBCD), LLGL2 scribble cell polarity complex component (LLGL2), and GDP dissociation inhibitor 1 (GDI1) were associated with poor DMFS (Figure 7c–h). These evidences might provide a possible interacting network of SLC27A4 in clinical breast cancer tissues. The summarized graph of the present study is presented in Figure 7i.

The expression in SLC27 gene family (SLC27A1-6) in breast cancer samples and nontumor breast samples across available datasets was evaluated by Oncomine Research Edition (http://www.oncomine.org, v4.5; Thermo Fisher Scientific, Inc., Waltham, MA, USA). The expression of SLC27A4 was further evaluated in the TCGA breast dataset in Oncomine Research Edition, either. Moreover, the expression of SLC27A4 in different subtypes and races of breast cancer samples was evaluated by the UALCAN (http://ualcan.path.uab.edu) [42]. The association between gene expression and overall survival rate of breast cancer patients was obtained from the Human Protein Atlas (https://www.proteinatlas.org) [43,44]. In addition, the images of SLC27A4 protein expression in normal breast and breast cancer tissues, and results staining intensity of SLC27A4 were obtained from the Human Protein Atlas database (Antibody: HPA007293). The high and low expression groups were separated by “best separation” on the website of the Human Protein Atlas. Distant metastasis-free survival (DMFS) was evaluated by Kaplan–Meier (KM) plotter (http://kmplot.com) [45] and high- and low-expression groups were divided according to the “auto select best cutoff” in the website. The interacting networks were determined according to the TCSBN database (http://inetmodels.com) [18]. “Maximum number of nodes” was set at 25 and “Edge Pruning Parameter (-log10 P)” was set at 3 in the TCSBN database. The interacting networks were drawn by Cytoscape version 3.6.1 [46]. Functional annotation (biological process) was determined by DAVID Bioinformatics Resources (https://david.ncifcrf.gov) [19,20].

The capacity of fatty acid uptake was determined by using the Free Fatty Acid Uptake Assay Kit (Fluorometric) according to the manufacturer’s instructions (cat. no. ab176768; Abcam, Cambridge, UK). Before fatty acid uptake assay, 1 × 104 Hs578T and MDA-MB-231 were seeded on a 96-well plate overnight. The cells were preincubated in serum-free media for 1 h after phosphate-buffered saline washing. Subsequently, cells were incubated in a fluorescent fatty acid mixture for 30 min. The results were evaluated by using a microplate fluorescence reader at 485/528 nm (FL × 800; BioTek Instruments Inc., Winooski, VT, USA). The fluorescence signals from wells containing assay mix without cells were used as the background and fluorescence quantification in vector control groups was set to 100% for relative quantification.

The cell proliferation of Hs578T and MDA-MB-231 was evaluated by WST-1 (4-[3-(4-iodophenyl)-2-(4-nitrophenyl)-2H-5-tetrazolio]-1,3-benzene disulfonate) (Clontech, Mountain View, CA, USA). Briefly, 3 × 103 cells were respectively seeded in 96-well plates overnight. The culture media were replaced with 100 μL mixture containing 95 μL of fresh culture media and 5 μL of WST-1 reagent. For 24- or 48-h incubation, the absorbance at 450 nm was determined on a microplate spectrophotometer (PowerWave X340; BioTek, Winooski, VT, USA).

To determine the long-term effect, 500 cells were seeded in a six-well plate. Cell culture media were replaced each 3 days until 14 days after seeding. Colonies were stained with crystal violet (0.4 g/L; Sigma-Aldrich, St. Louis, MO, USA) and the number of colonies was counted.

Hs578T and MDA-MB-231 cells were harvested at 48 h incubation after subculture. Harvested cells were fixed with 70% ethanol overnight at 4 °C and then were washed by phosphate-buffered saline. Subsequently, cells were incubated with 1 U/mL of DNase-free RNase A and 5 μg/mL of propidium iodide for 30 min at 4 °C in the dark (Sigma-Aldrich, St. Louis, MO, USA). The cell cycle distribution was determined on a flow cytometry (BD Accuri C6 flow cytometer, BD Biosciences San Jose, CA, USA). Amount of G0/G1, S and G2/M phase cells were determined as a percentage of the total number of cells.

1.5 × 105 breast cancer cells were seeded into 24-well plates. A scratch was made by a 200 μL pipette tip when cells reached a complete confluent monolayer. After scratching, the suspended debris was removed by phosphate-buffered saline (PBS) washing. Subsequently, the cells were cultured in serum-free culture media (MDA-MB-231) or culture media with 1% FBS (Hs578T) for 24 h. The images were captured via a Leica inverted microscope and quantification was performed by TScratch software (version 1.0. Available at http://www.cse-lab.ethz.ch).

Before performing the transwell migration assay, 3 × 104 breast cancer cells were seeded into a 24-well insert (Millicell Cell Culture Inserts 24-well Hanging Inserts, 8-μm PET, Millipore, St. Charles, MO, USA) in 300-μL serum-free medium, while 500 μL medium with 10% FBS was placed in the lower chamber. After culturing for 24 h, the transwell membrane on the 24-well insert was fixed with 500 μL 4% formaldehyde solution followed by 1% crystal violet staining. After removal of the cells on the upper surface, four images of each bottom membrane were captured using a Leica inverted microscope at ×100 magnification via Leica Applications Suite version 4.5.0™ (LAS v4.5) software (Leica Microsystems, Wetzlar, Switzerland). Invasion assay was performed by QCM ECMatrix Cell Invasion Assay, 24-well (8 μm), fluorimetric (Millipore, Billerica, MA, USA) according to the manufacturer’s instruction. Briefly, 1.2 × 105 cells in 300 μL serum-free culture media was added in the insert and 500 μL media with 10% FBS was placed in the lower chamber for 48 h. The results were evaluated on a Bio-tek FLX-800 Fluorescence & Luminescence Reader at the excitation (Ex) and emission (Em) wavelengths = 485/528 nm.

All graphs and statistics were made by the GraphPad Prism 7 software (GraphPad Software, Inc., La Jolla, CA, USA). To examine statistical differences among all groups, a one-way analysis of variance (ANOVA) with Tukey’s multiple comparison test was used. p < 0.05 was considered to indicate a statistically significant difference.

High expression of SLC27A4 was associated with breast cancer tissues and poor prognosis in breast cancer patients. In addition, knockdown of SLC27A4 decreased not only fatty acid uptake capacity in Hs578T and MDA-MB-231 but cell growth in Hs578T also, as well as capacity of migration and invasion in Hs578T and MDA-MB-231. Although detailed regulatory signaling pathways of SLC27A4 was not completely investigated in this study, our results firstly demonstrated that SLC27A4 was involved in progression of breast cancer. It is worth investigating whether SLC27A4 could serve as a diagnostic marker and treatment target in further studies. 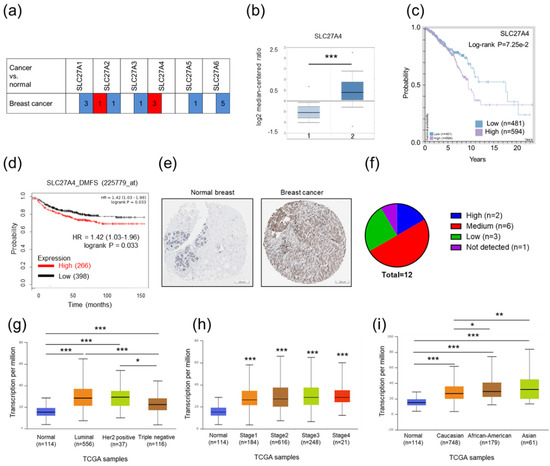 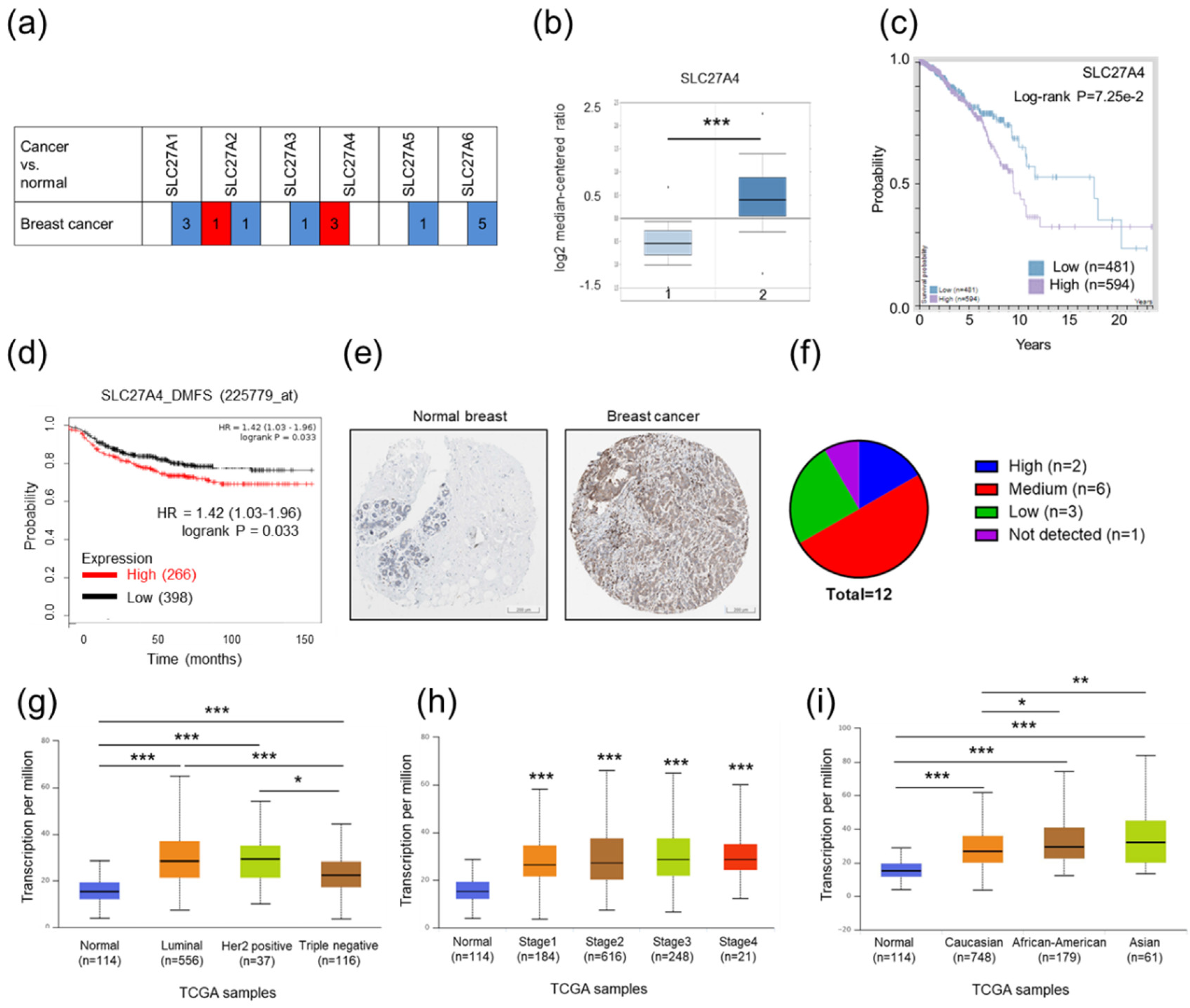 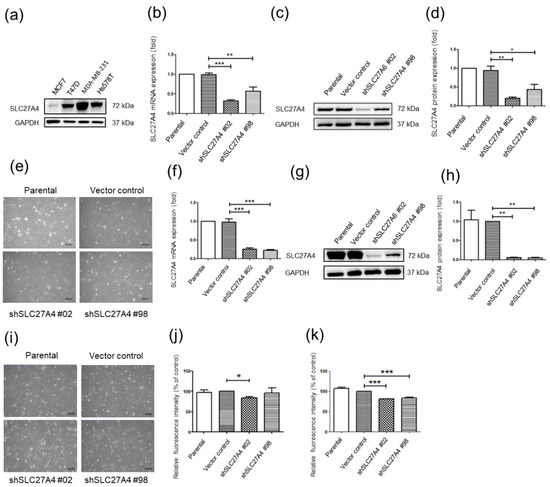 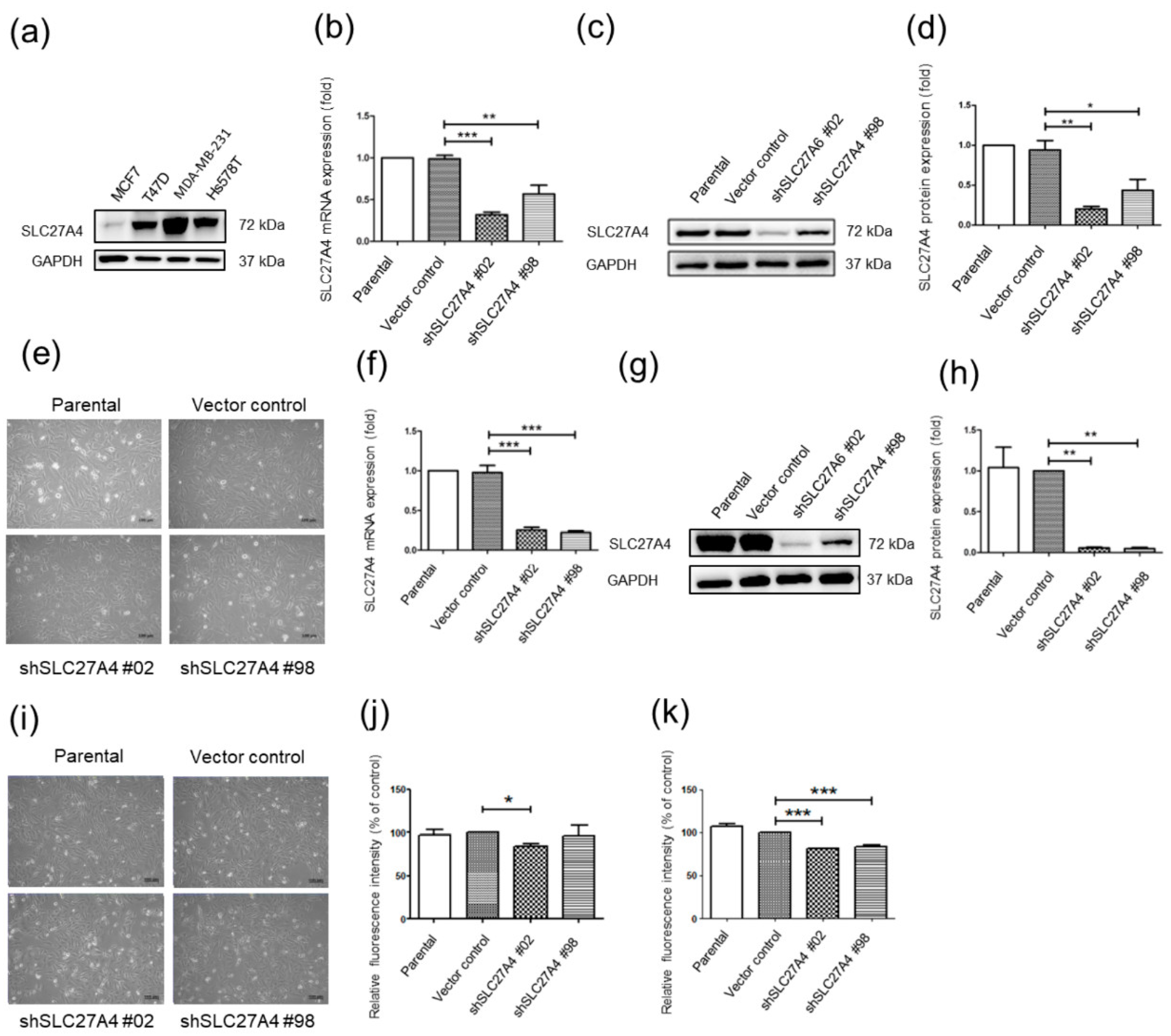 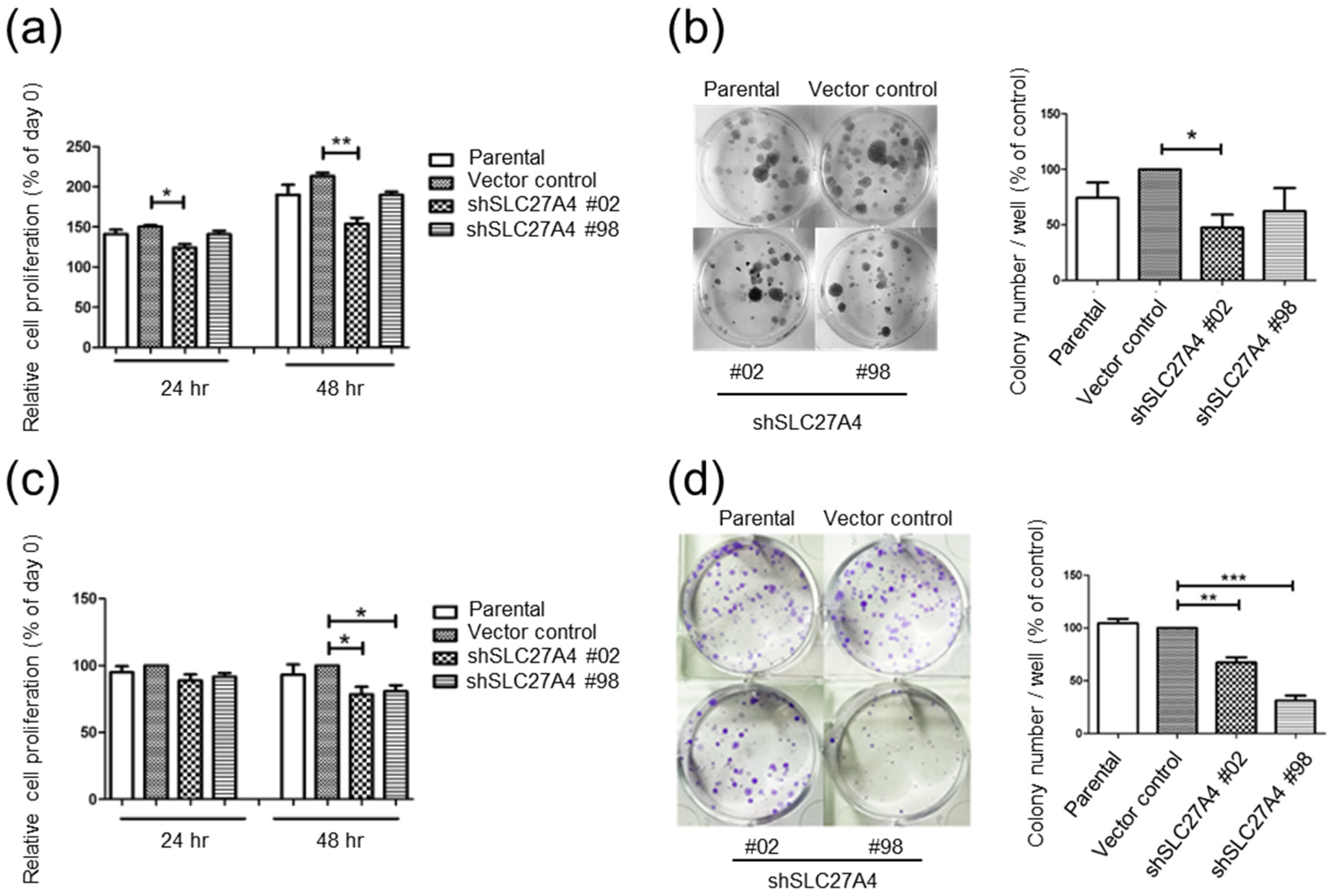 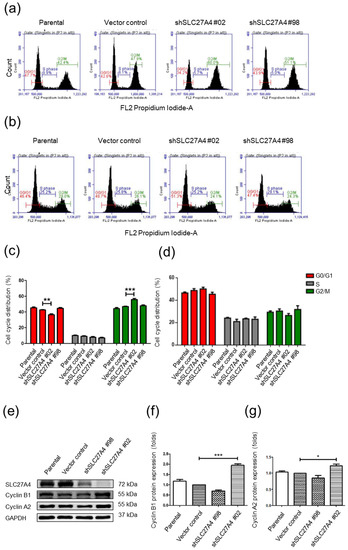 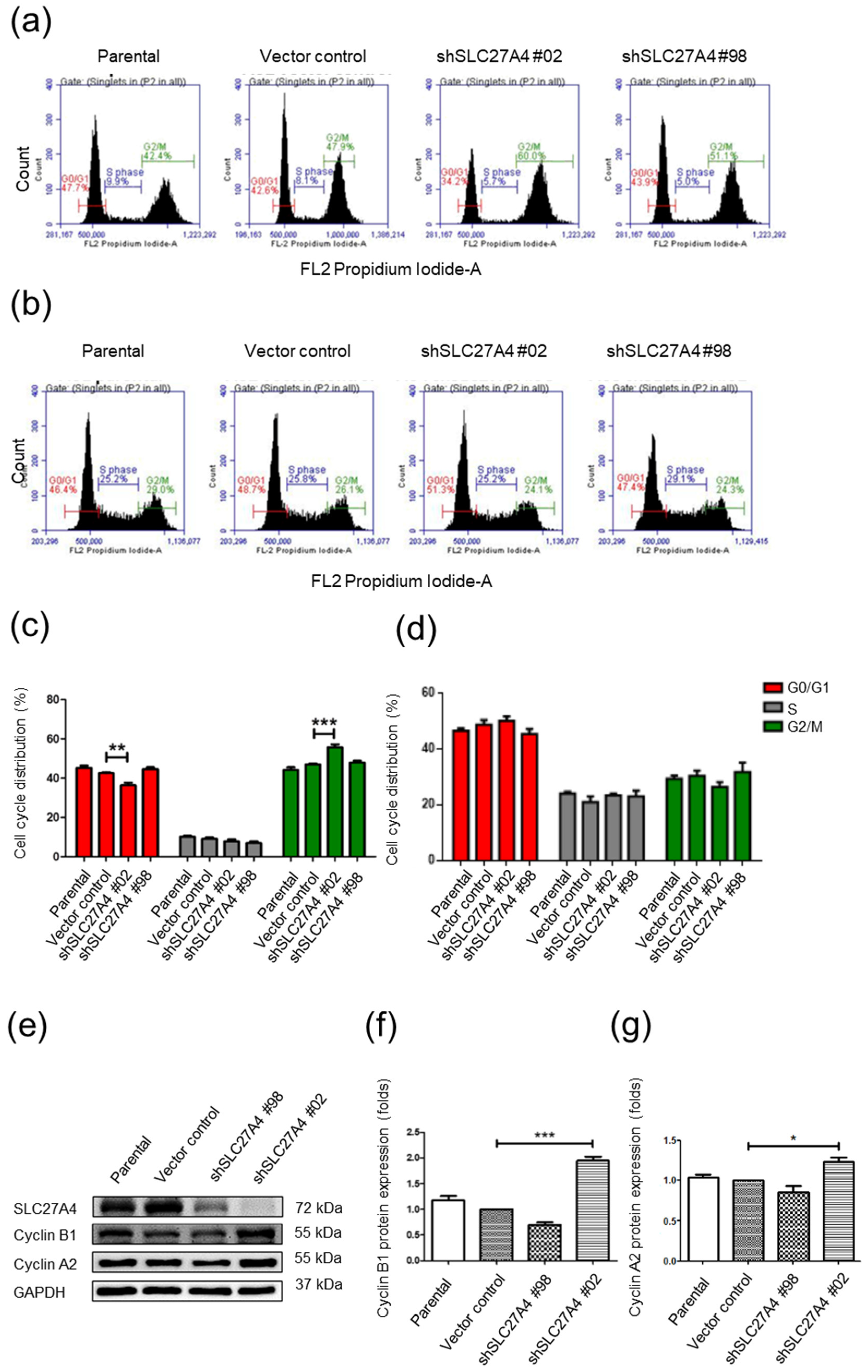 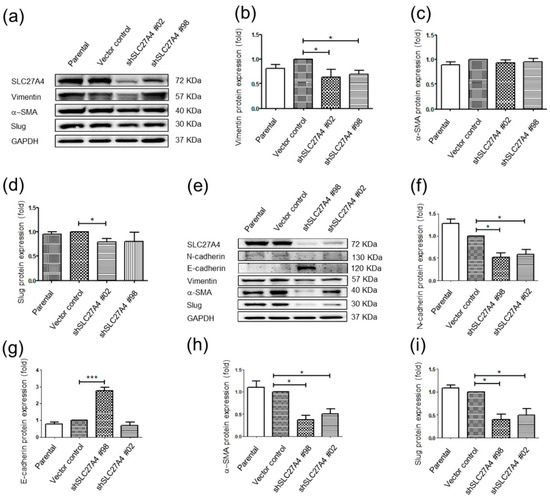 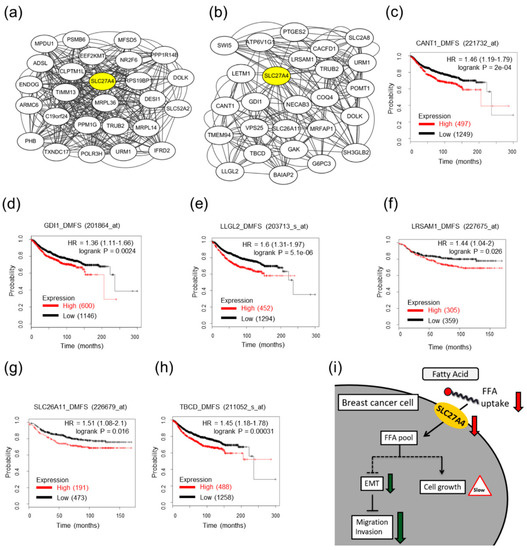