Insights into the Structural Requirements of 2(S)-Amino-6-Boronohexanoic Acid Derivatives as Arginase I Inhibitors: 3D-QSAR, Docking, and Interaction Fingerprint Studies

Human arginase I (hARGI) is an important enzyme involved in the urea cycle; its overexpression has been associated to cardiovascular and cerebrovascular diseases. In the last years, several congeneric sets of hARGI inhibitors have been reported with possible beneficial roles for the cardiovascular system. At the same time, crystallographic data have been reported including hARGI–inhibitor complexes, which can be considered for the design of novel inhibitors. In this work, the structure–activity relationship (SAR) of Cα substituted 2(S)-amino-6-boronohexanoic acid (ABH) derivatives as hARGI inhibitors was studied by using a three-dimensional quantitative structure–activity relationships (3D-QSAR) method. The predictivity of the obtained 3D-QSAR model was demonstrated by using internal and external validation experiments. The best model revealed that the differential hARGI inhibitory activities of the ABH derivatives can be described by using steric and electrostatic fields; the local effects of these fields in the activity are presented. In addition, binding modes of the above-mentioned compounds inside the hARGI binding site were obtained by using molecular docking. It was found that ABH derivatives adopted the same orientation reported for ABH within the hARGI active site, with the substituents at Cα exposed to the solvent with interactions with residues at the entrance of the binding site. The hARGI residues involved in chemical interactions with inhibitors were identified by using an interaction fingerprints (IFPs) analysis. View Full-Text
Keywords: arginase inhibitors; QSAR; docking; interaction fingerprints arginase inhibitors; QSAR; docking; interaction fingerprints
►▼ Show Figures 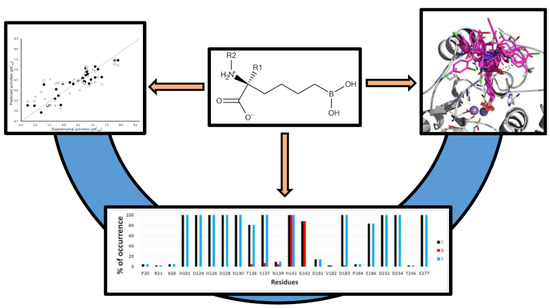