The importance of Wnt/β-catenin signaling in cancer stem cells (CSCs) has been acknowledged; however, the mechanism through which it regulates the biological function of CSCs and promotes cancer progression remains elusive. Hence, to understand the intricate mechanism by which Wnt controls stemness, the specific downstream target genes of Wnt were established by analyzing the genetic signatures of multiple types of metastatic cancers based on gene set enrichment. By focusing on the molecular function of Wnt target genes, the biological roles of Wnt were interpreted in terms of CSC dynamics from initiation to metastasis. Wnt signaling participates in cancer initiation by generating CSCs from normal stem cells or non-CSCs and augmenting persistent growth at the primary region, which is resistant to anti-cancer therapy. Moreover, it assists CSCs in invading nearby tissues and in entering the blood stream, during which the negative feedback of the Wnt signaling pathway maintains CSCs in a dormant state that is suitable for survival. When CSCs arrive at distant organs, another burst of Wnt signaling induces CSCs to succeed in re-initiation and colonization. This comprehensive understanding of Wnt target genes provides a plausible explanation for how Wnt allows CSCs variation during cancer progression. View Full-Text
Keywords: cancer stem cell; Wnt signaling; initiation; persistence; invasion; migration; metastasis cancer stem cell; Wnt signaling; initiation; persistence; invasion; migration; metastasis
►▼ Show Figures 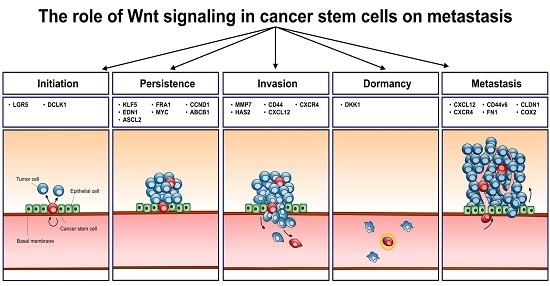