Ticks are the vector of many human and animal diseases; and host detection is critical to this process. Ticks have a unique sensory structure located exclusively on the 1st pairs of legs; the fore-tarsal Haller’s organ, not found in any other animals, presumed to function like the insect antennae in chemosensation but morphologically very different. The mechanism of tick chemoreception is unknown. Utilizing next-generation sequencing and comparative transcriptomics between the 1st and 4th legs (the latter without the Haller’s organ), we characterized 1st leg specific and putative Haller’s organ specific transcripts from adult American dog ticks, Dermacentor variabilis. The analysis suggested that the Haller’s organ is involved in olfaction, not gustation. No known odorant binding proteins like those found in insects, chemosensory lipocalins or typical insect olfactory mechanisms were identified; with the transcriptomic data only supporting a possible olfactory G-protein coupled receptor (GPCR) signal cascade unique to the Haller’s organ. Each component of the olfactory GPCR signal cascade was identified and characterized. The expression of GPCR, Gαo and β-arrestin transcripts identified exclusively in the 1st leg transcriptome, and putatively Haller’s organ specific, were examined in unfed and blood-fed adult female and male D. variabilis. Blood feeding to repletion in adult females down-regulated the expression of all three chemosensory transcripts in females but not in males; consistent with differences in post-feeding tick behavior between sexes and an expected reduced chemosensory function in females as they leave the host. Data are presented for the first time of the potential hormonal regulation of tick chemosensation; behavioral assays confirmed the role of the Haller’s organ in N,N-diethyl-meta-toluamide (DEET) repellency but showed no role for the Haller’s organ in host attachment. Further research is needed to understand the potential role of the GPCR cascade in olfaction. View Full-Text
Keywords: American dog tick; Dermacentor variabilis; tick; Haller’s organ; olfaction; gustation; chemoreception; odorant binding proteins; GPCR; DEET; transcriptome American dog tick; Dermacentor variabilis; tick; Haller’s organ; olfaction; gustation; chemoreception; odorant binding proteins; GPCR; DEET; transcriptome
►▼ Show Figures 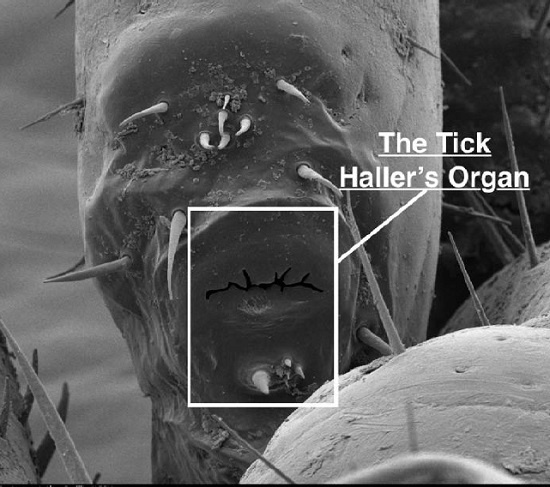