Erythropoietin and Its Angiogenic Activity
Next Article in Special Issue

Prostate cancer (PCa) evolves into a condition known as castration-resistant prostate cancer (CRPC) when the androgen deprivation therapy fails. At this stage, docetaxel (DCT) represents the gold standard treatment [1]. Unfortunately, most patients develop resistance to the drug within a year from the beginning of the therapy, and the disease progresses [2]. The identification of biomarkers capable to predict in advance the onset of the DCT resistance could facilitate the shift towards alternative effective therapies, thus increasing the life expectancy of the patients.
MicroRNAs (miRNAs), and more recently circulating miRNAs (c-miRNA), have been proposed as molecules with a diagnostic and prognostic value for PCa [3,4] but only few studies explored c-miRNAs as predictive biomarker of DCT resistance [5,6].
We have already reported that PCa cells in vitro specifically released in the growth medium the same miRNAs found in the peripheral blood of PCa patients [7]. Therefore, it is conceivable that PCa cells resistant to DCT will release in the growth medium miRNAs that, if detected in the blood of PCa patients, could reveal the presence of DCT-resistant cells. To approach the problem, we isolated PCa cells resistant to DCT and used the next-generation sequencing (NGS) technology and bioinformatics tools to identify miRNAs differentially released in the growth medium by DCT-resistant cells (DCTR-miRNAs). We also discussed that DCTR-miRNAs may represent potential predictive biomarkers of the DCT resistance suitable to be tested in PCa patients under DCT therapy.

We exposed for three days either 22Rv1 or DU-145 PCa cells to increasing concentrations of DCT and observed a dose-dependent inhibition of cell proliferation which reached a plateau phase at 4 nM concentration and 3 nM, respectively (Figure 1A,C). We then grew continuously 22Rv1 cells and DU-145 cells respectively in 4 nM and 3 nM DCT-containing medium until we observed colonies presumably resistant to DCT. We isolated and expanded as clones 6 independent colonies from both 22Rv1 cells (22Rv1/DCTR clones) and DU-145 cells (DU-145/DCTR clones). Afterwards, we tested them for the DCT resistance. We treated cells with increasing DCT concentration and showed that 22Rv1/DCTR and DU-145/DCTR clones were more resistant to DCT with respect to parental cell lines (Figure 1B,D).
In addition, we showed that 22Rv1/DCTR as well as DU-145/DCTR clones presented expanded generation times (Figure 2A,B) and an acquired capability to extrude Rhodamine 123 (Figure 2C,D). These results, together with the upregulation of MDR1 gene (Figure 2E,F), indicated that the drug export increase through the ABC transporters was at the basis of the DCT resistance in all clones. We tested also the expression of BCL2 and βIII tubulin genes, whose upregulation is involved in the DCT resistance in PCa [8,9].
It is worth noting that while in 22Rv1/DCTR clones the expression level of both BCL2 (Figure 3A) and βIII tubulin (Figure 3B) genes did not change, these genes showed slight but significant variations in DU-145/DCTR clones. In particular, BCL2 was upregulated in DU-145/2B and DU-145/4 clones and downregulated in DU-145/2.1 and DU-145/6.7 clones (Figure 3B). In addition, βIII tubulin gene was upregulated in DU-145/2A clones and downregulated in DU-145/3.1 clones (Figure 3D).

To evaluate whether the level of the DCTR-miRNAs was affected by DCT, we measured by qRT-PCR the level of the 12 DCTR-miRNAs in the growth medium of parental cells (22Rv1 or DU-145) treated for three days with DCT and we calculated the fold change of these miRNAs in comparison to that found in the growth medium of untreated cells (column B, Table 1). Then, we evaluated the mean fold change of the DCTR-miRNAs (measured by qRT-PCR) in the growth medium of 22Rv1/DCTR or DU-145/DCTR clones with respect to that of the corresponding parental cells line (column A, Table 1). Finally, for each DCTR-miRNAs, we calculate the ratio between the fold change value of DCT-treated versus untreated cells and the mean fold change of DCTR-miRNA in 22Rv1/DCTR or DU-145/DCTR clones versus parental cells (column A/column B, Table 1). We observed that the level of 6 DCTR-miRNAs was similar in cells either resistant to or treated with DCT, whereas the level of the remaining 6 DCTR-miRNAs was higher (more than 2-fold) in cells resistant to DCT versus cells treated with DCT (Table 1, miRNAs underlined and in bold), suggesting that their differential release was specific of the DCT-resistant phenotype.

To gain more insight into the differential release of the DCTR-miRNAs by the DCTR clones we measured the intracellular level of the DCTR-miRNAs specifically associated with DCT-resistant phenotype (Table 1, underlined and in bold) in 22Rv1/DCTR clones with respect to parental cell lines (Figure 6). We found that DCTR-miRNAs were upregulated in 22Rv1/DCTR clones (particularly miR-4532, miR-5096 and miR-210-3p) except for miR-21-3p and miR-21-5p whose level did not change significantly, suggesting that the release of DCTR-miRNAs by DCTR PCa cells could be mediated by both active or passive mechanisms.

To obtain DCTR clones, 5 × 105 cells/100 mm diameter dish were grown in presence of DCT of either 3 nM (22Rv1) or 4 nM (DU-145). Each 3–4 days, the medium was removed and replaced with fresh selective medium until colonies formation (30–50 days). Thereafter, independent colonies were isolated and expanded to clonal populations. To verify whether clones were still resistant to DCT, cells were seeded at density of 2 × 104 cells/cm2 and 24 h later exposed at increasing concentrations of DCT (range 1–20 nM). After 72 h exposure, cell proliferation was determined as reported above. The generation times were calculated dividing the hours in culture by the number of cell doublings calculated as [lg2 (final cell number/initial cell number)/lg2 2].

The assay was performed as previously described [30] with some modifications. Briefly, for each sample of DU-145 or 22Rv1 cells and DCTR clones, 2 aliquots of 4 × 104 cells/mL were incubated at 37 °C with 1 μL of Rhodamine 123 (Rh123) (1 mM, SIGMA) and with or without 1 μL of Verapamil (50 mM, SIGMA). After 30 min, cells were harvested and centrifuged and each aliquot was split into two aliquots and analyzed with FACScalibur cytofluorimeter (BD Biosciences, San Jose, CA, USA) immediately (aliquot 1) and after 1 h (aliquot 2). Rh123 green was recorded on FL1 channel and the gate was set to exclude fluorescence of both aliquot 1 samples and verapamil minus aliquot 2 sample. The Rh123 extrusion was detected in the verapamil plus aliquot 2 sample and expressed as percentage of cells with a fluorescence different from the one excluded from the gate.

miRNAs and mRNAs quantification were performed as previously described [7]. Transcripts values were normalized to those obtained from the amplification of the internal control (GAPDH, HPRT1, β-actin for mRNAs and U6, sno-44, sno-55, sno-110 for intracellular miRNA and cel-miR-39 for extracellular miRNAs).

The small RNA libraries were constructed using TruSeq Small RNA kit (Illumina, San Diego, CA, USA) according to the manufacturer’s suggestions. cDNA libraries were loaded at six-plex level of multiplexing (~4 million reads per samples) into a flow cell V3, and sequenced in a single-reads mode (50 bp) on a MiSeq sequencer (Illumina). Raw reads were analyzed as described in Barsanti et al. [31]. Briefly, raw sequences were de-multiplexed using the Illumina pipline CASAVA v.1.8.2. software (Illumina). FastQC was used for quality check and primary reads were trimmed of adapters sequence using Cutadapt v1.2.1 [32]. Remaining reads, with a minimum length of 17 bzp and maximum 35 bp after trimming, were clustered for unique hits and mapped to pre-miRNA sequences present into the miRBase (rel. 21) employing miRExpress tool v 2.1.3 [33].

Data are expressed as mean ± SD of at least three independent experiments, and analyzed with Student’s t-test.
The differential analysis was performed using two different statistical methods implemented in the two packages, edgeR [34] and DESeq2 [35] of the R Bioconductor repository. Exact p-values were adjusted for multiple testing according to Benjamini–Hochberg procedure. In order to control the batch effect of the two sequencing runs of the DU-145/DCTR clones experiment, the analysis was corrected for baseline differences between the batches using an additive model in the design formula of both edgeR and DESeq2 approaches.
The hierarchical clustering was performed using the mean centered Log2 normalized reads, the Euclidean distance and complete agglomerative method.

We would like to thank Stefania Biagini (Fondazione Toscana Gabriele Monasterio, FTGM, Pisa) for giving us taxotere and Giuseppe Rainaldi for critical reading of the manuscript. This work was supported by the Istituto Toscano Tumori (grant 2010-Giuseppe Rainaldi; grant 2013-Milena Rizzo). 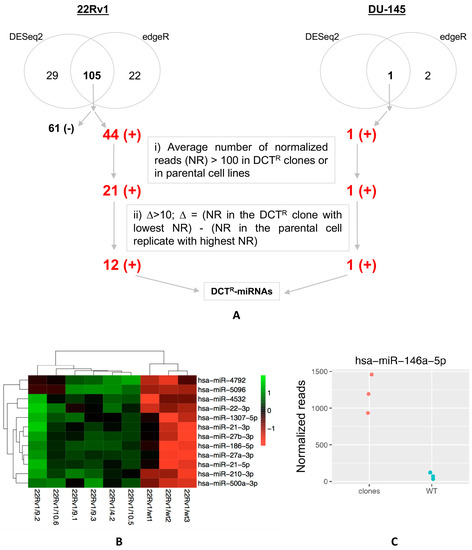 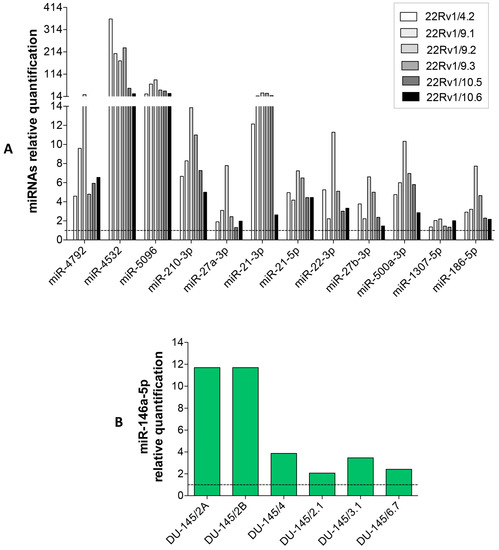 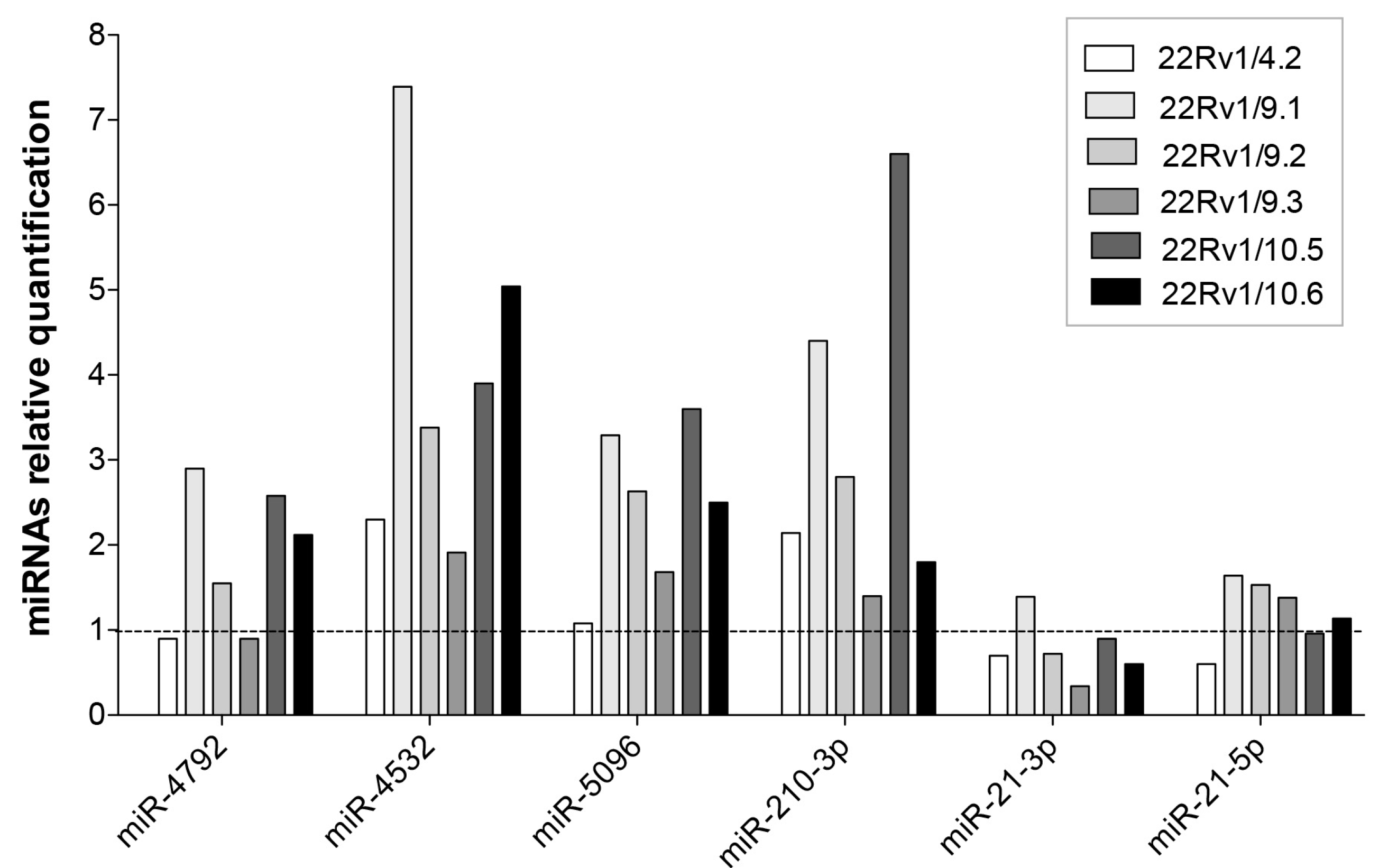