Obesity and Asthma: A Missing Link
Next Article in Special Issue

Clinical Applications of Autophagy Proteins in Cancer: From Potential Targets to Biomarkers

Nowadays, salt consumption appears to be drastically above the recommended level in industrialized countries. The health consequences of this overconsumption are heavy since high-salt intake induces cardiovascular disease, kidney dysfunction, and stroke. Moreover, harmful interaction may also occur with orthopaedic devices because overconsumption of salt reinforces the corrosive aspect of biological tissues and favors bone resorption process. In the present study, we aimed to assess the in vivo effect of three weeks of a high-salt diet, associated (or not) with two weeks of the neuro-myoelectrostimulation (NMES) rehabilitation program on the biocompatibility of four biomaterials used in the manufacture of arthroplasty implants. Thus, two non-metallic (PEEK and Al2O3) and two metallic (Ti6Al4V and CrCo) compounds were implanted in the rat tibial crest, and the implant-to-bone adhesion and cell viability of two surrounded muscles, the Flexor Digitorum (FD) and Tibialis Anterior (TA), were assessed at the end of the experiment. Results indicated lower adhesion strength for the PEEK implant compared to other biomaterials. An effect of NMES and a high-salt diet was only identified for Al2O3 and Ti6Al4V implants, respectively. Moreover, compared to a normal diet, a high-salt diet induced a higher number of dead cells on both muscles for all biomaterials, which was further increased for PEEK, Al2O3, and CrCo materials with NMES application. Finally, except for Ti6Al4V, NMES induced a higher number of dead cells in the directly stimulated muscle (FD) compared to the indirectly stimulated one (TA). This in vivo experiment highlights the potential harmful effect of a high-salt diet for people who have undergone arthroplasty, and a rehabilitation program based on NMES. View Full-Text
Keywords: polyetheretherketone; aluminum oxide; chrome-cobalt; titanium alloy; cell viability; implant-to-bone adhesion polyetheretherketone; aluminum oxide; chrome-cobalt; titanium alloy; cell viability; implant-to-bone adhesion
►▼ Show Figures 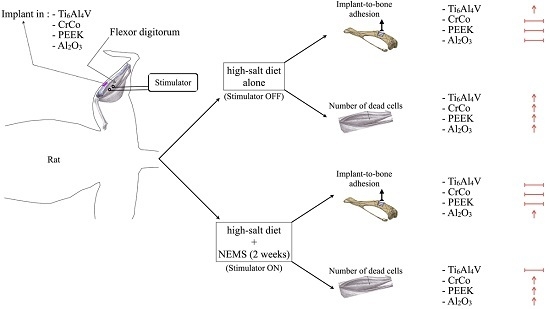