Adiponectin, a Therapeutic Target for Obesity, Diabetes, and Endothelial Dysfunction

Adiponectin is the most abundant peptide secreted by adipocytes, whose reduction plays a central role in obesity-related diseases, including insulin resistance/type 2 diabetes and cardiovascular disease. In addition to adipocytes, other cell types, such as skeletal and cardiac myocytes and endothelial cells, can also produce this adipocytokine. Adiponectin effects are mediated by adiponectin receptors, which occur as two isoforms (AdipoR1 and AdipoR2). Adiponectin has direct actions in liver, skeletal muscle, and the vasculature.Adiponectin exists in the circulation as varying molecular weight forms, produced by multimerization. Several endoplasmic reticulum ER-associated proteins, including ER oxidoreductase 1-α (Ero1-α), ER resident protein 44 (ERp44), disulfide-bond A oxidoreductase-like protein (DsbA-L), and glucose-regulated protein 94 (GPR94), have recently been found to be involved in the assembly and secretion of higher-order adiponectin complexes. Recent data indicate that the high-molecular weight (HMW) complexes have the predominant action in metabolic tissues. Studies have shown that adiponectin administration in humans and rodents has insulin-sensitizing, anti-atherogenic, and anti-inflammatory effects, and, in certain settings, also decreases body weight. Therefore, adiponectin replacement therapy in humans may suggest potential versatile therapeutic targets in the treatment of obesity, insulin resistance/type 2 diabetes, and atherosclerosis. The current knowledge on regulation and function of adiponectin in obesity, insulin resistance, and cardiovascular disease is summarized in this review. View Full-Text
Keywords: adiponectin; obesity; type 2 diabetes; endothelial dysfunction adiponectin; obesity; type 2 diabetes; endothelial dysfunction
►▼ Show Figures 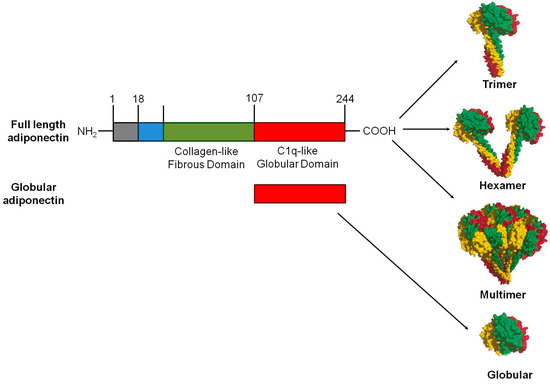