Structure, Expression, and Functional Analysis of the Hexokinase Gene Family in Cassava
Next Article in Special Issue

Christopher B. Little
1,3 and

The data reported in this study is based on studies conducted in 1992 [72] and 2012 [70] where 5 × 5 and 6 × 20 mm annular lesions were used to induce DDD in merino wethers, all methodology is provided in detail in these earlier publications. Ethical approval for conducting all animal procedures was obtained from the Royal North Shore Hospital Animal Care and Ethics Committee of The University of Sydney in 1992 and in 2011 as outlined in earlier studies [70,72].

Briefly, merino wethers aged 3–4 years of age were purchased at local sale yards. Sixty-four animals were used in the 5 × 5 mm lesion study, animals were randomly separated into 4 groups of 16 animals, 8 of the animals in each group received controlled anterolateral lesions in the L1L2, L3L4 and L5L6 IVDs, the remaining animals did not receive a lesion and served as sham operated controls (surgical approach only). All animals were maintained in open pasture and allowed to roam freely post surgery. The animals were subsequently sacrificed at 6, 12, 18 and 24 months post operatively (PO) and the spines removed (two additional sheep were also sacrificed 3 month PO). The IVDs of interest and adjacent vertebral body segments were isolated using a bone saw and fixed in 10% neutral buffered formalin. In the 6 × 20 mm lesion study group thirty-two merinos were separated into a lesion group and sham operated group. The Lesion group received 6 × 20 mm anterolateral lesions in the L1L2, L3L4 and L5L6 IVDs. Animals were sacrificed 3 month PO and the spines were excised and IVDs of interest isolated for histology.

4.2. Induction of Disc Degeneration and Administration of Mesenchymal Stem Cells

A total of 18 three-year-old merino wether sheep were divided into 3 groups (lesion plus two non-operated control (NOC) sheep groups). All of the animals (except NOC sheep) received 6 × 20 mm annular lesions at the L1L2, L3L4 and L5L6 spinal levels by our established model [70]. After 12 weeks to establish disc degeneration, a second surgery was performed to expose the contralateral AF away from the lesion site and 10 million MSCs in 0.2 mL PBS or PBS carrier were injected into the NP through the undamaged AF of the L1L2, L3L4 and L5L6 lesion IVDs. After a further 14 weeks recovery from surgery the sheep were sacrificed and the lumbar IVDs collected for histological examination.

Details of the isolation and demonstration of pluripotency of ovine mesenchymal stem cells from pooled iliac crest bone marrow are as noted earlier [204]. Frozen cell stocks were thawed from nitrogen storage and grown in monolayer culture for several passages to expand cell numbers, passage 8 cells were used in this study. The chondrogenic, adipogenic and osteogenic pluripotency of these MSCs was confirmed as indicated earlier prior to their use in the annular lesion model [204].

Prior to fixing the IVDs, all soft tissue surrounding the IVDs was trimmed off, the posterior elements were removed with bone cutters and most of the superior and inferior vertebral bodies adjacent to each IVD were trimmed off with bone saws. The remaining bone was trimmed down to ~1 mm from the margins of the IVD using a Dremel burring tool. En-bloc fixation of the IVDs was undertaken for 48 h in 10% neutral buffered formalin. The vertebral body margins attached to the IVD are essential for the preservation of native tissue architecture and prevention of artifactual swelling of IVD specimens during fixation [205]. However, it is also critical to minimize the amount of bone attached to the IVD specimens to cut down on the decalcification time for each specimen to ensure the preservation of cellular detail and antibody epitope reactivity for later immunolocalization studies. Decalcification was undertaken with 10% formic acid 5% neutral buffered formalin with constant agitation Vertical tissue blocks (~5 mm thick) were taken of the IVD-vertebral bodies perpendicular to the lesion sites. These tissue blocks were dehydrated in graded ethanols and xylene and embedded in paraffin wax. Due to the large size of the 6 × 20 mm lesion this was sampled at three sites across the lesion site to obtain representative samples and these were separately evaluated. Four-micron vertical tissue sections were cut and adhered to SuperFrost Plus microscope slides for histological examination. Tissue sections were de-paraffinized in two changes of xylene prior to rehydration of the slides through graded ethanol washes (100–70%) to water.

Tissue sections were stained in Mayers Hematoxylin (five minutes), rinsed in tap water blued in Scotts Blueing solution (one minute) and counterstained in 0.0001% eosin (5 min), dehydrated in 95% ethanol then absolute ethanol, cleared in xylene and mounted.

4.6. Development of a Histopathological Scoring System for IVD Specimens

The histopathological scoring scheme described in the present study can be employed to quantitatively score IVD degeneration and regeneration following administration of adult MSCs and should also be applicable to the assessment of the efficacy of other biological interventions. Furthermore, this scheme can be used in conjunction with imaging (X-ray and MRI) and functional methods such as biomechanics and with biochemical compositional and gene expression techniques to examine these processes using a highly informative multidisciplinary approach.

The authors declare no conflict of interest or financial disclosures. 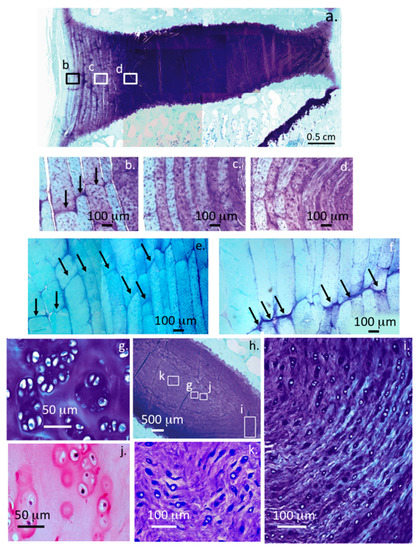 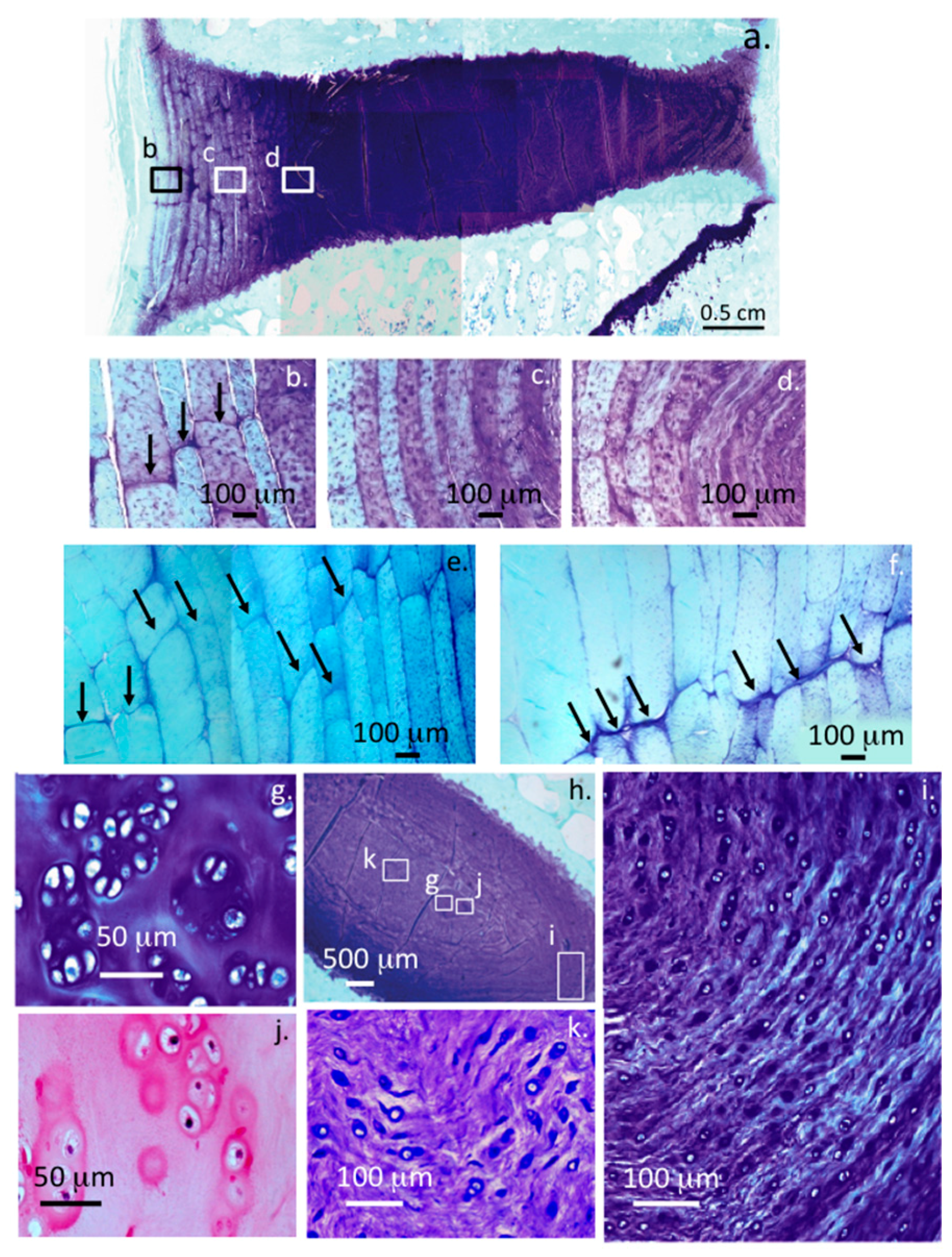 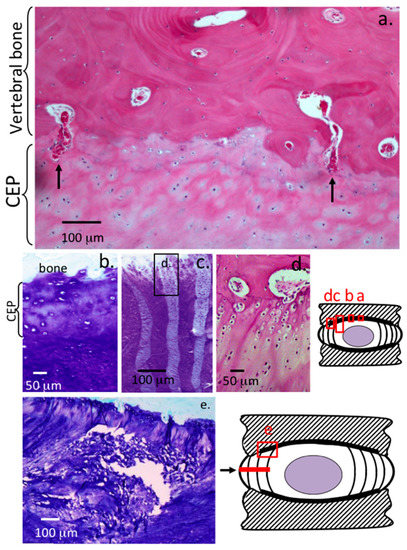 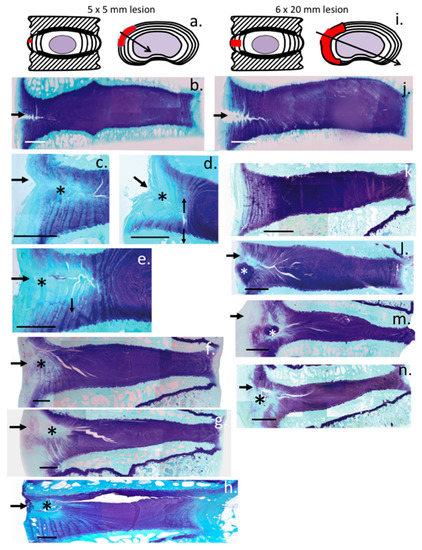 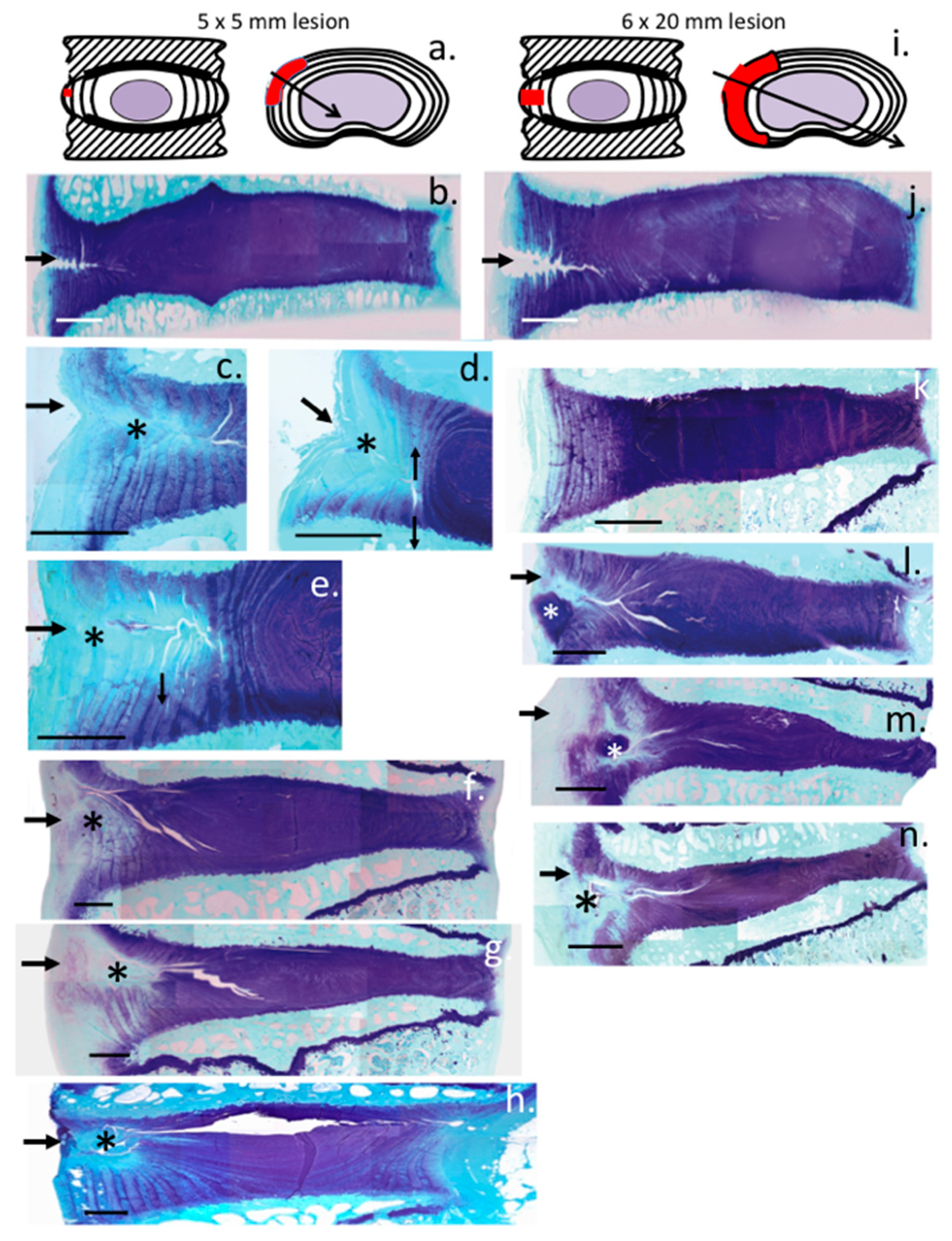 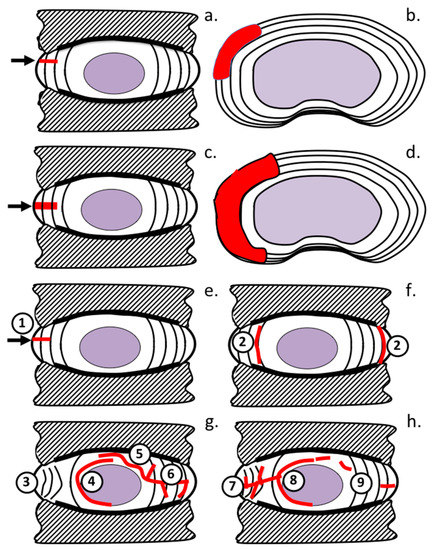 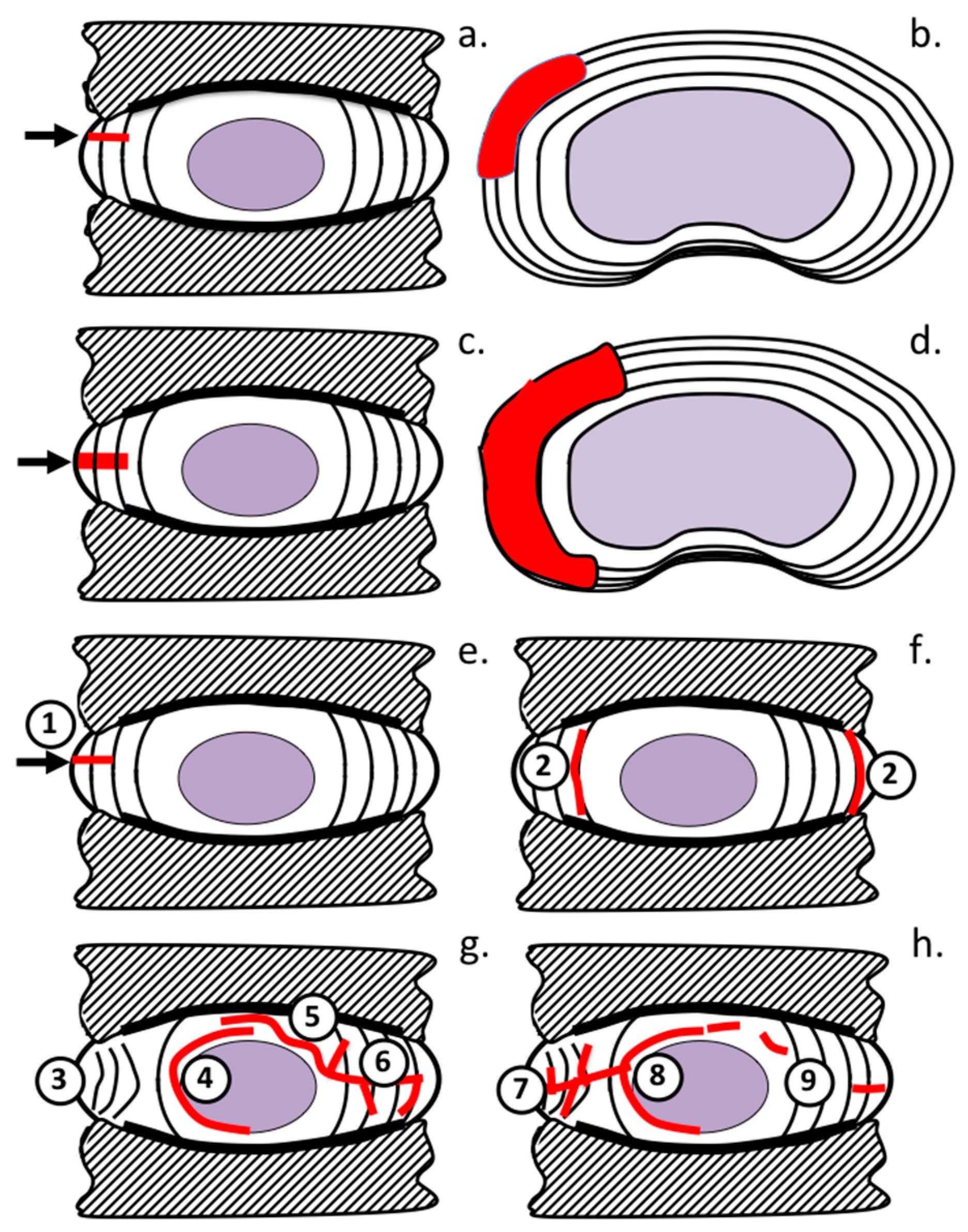 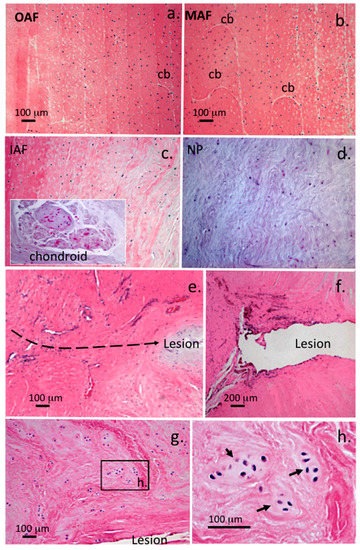 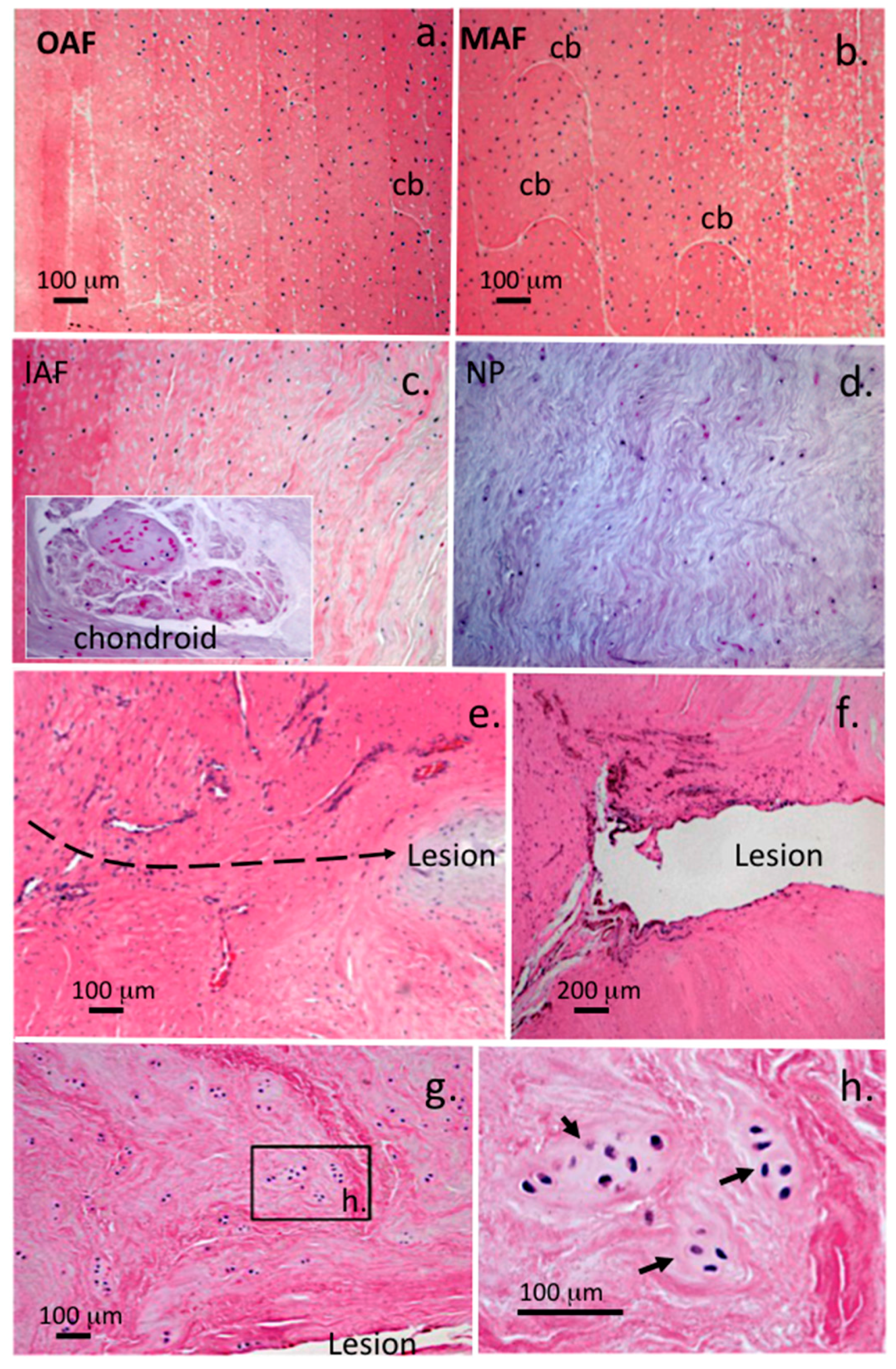 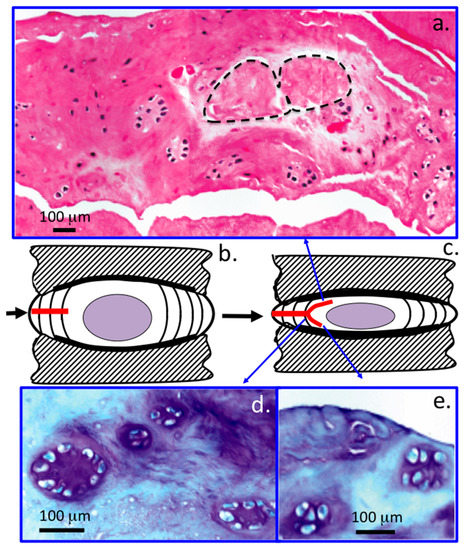 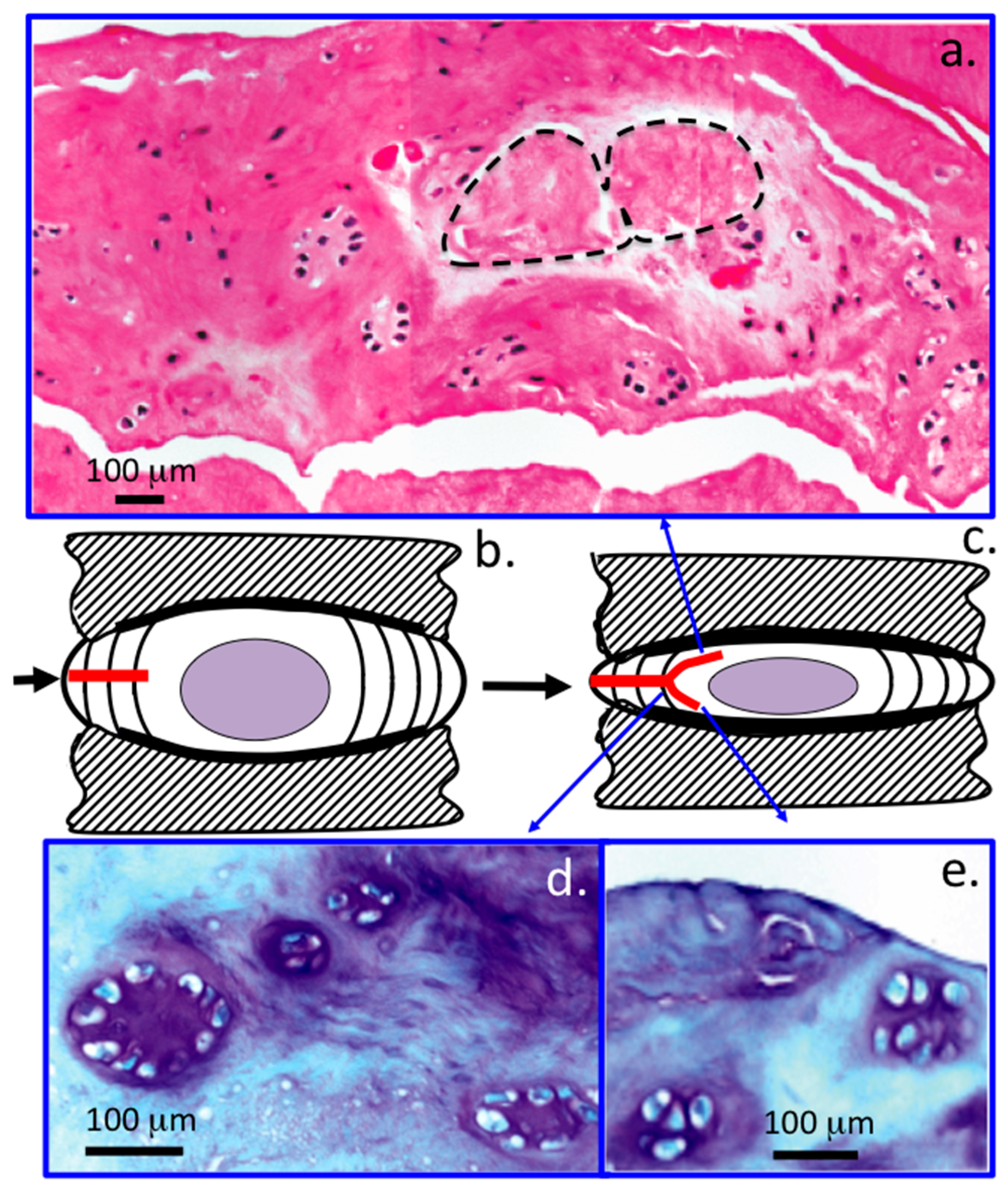 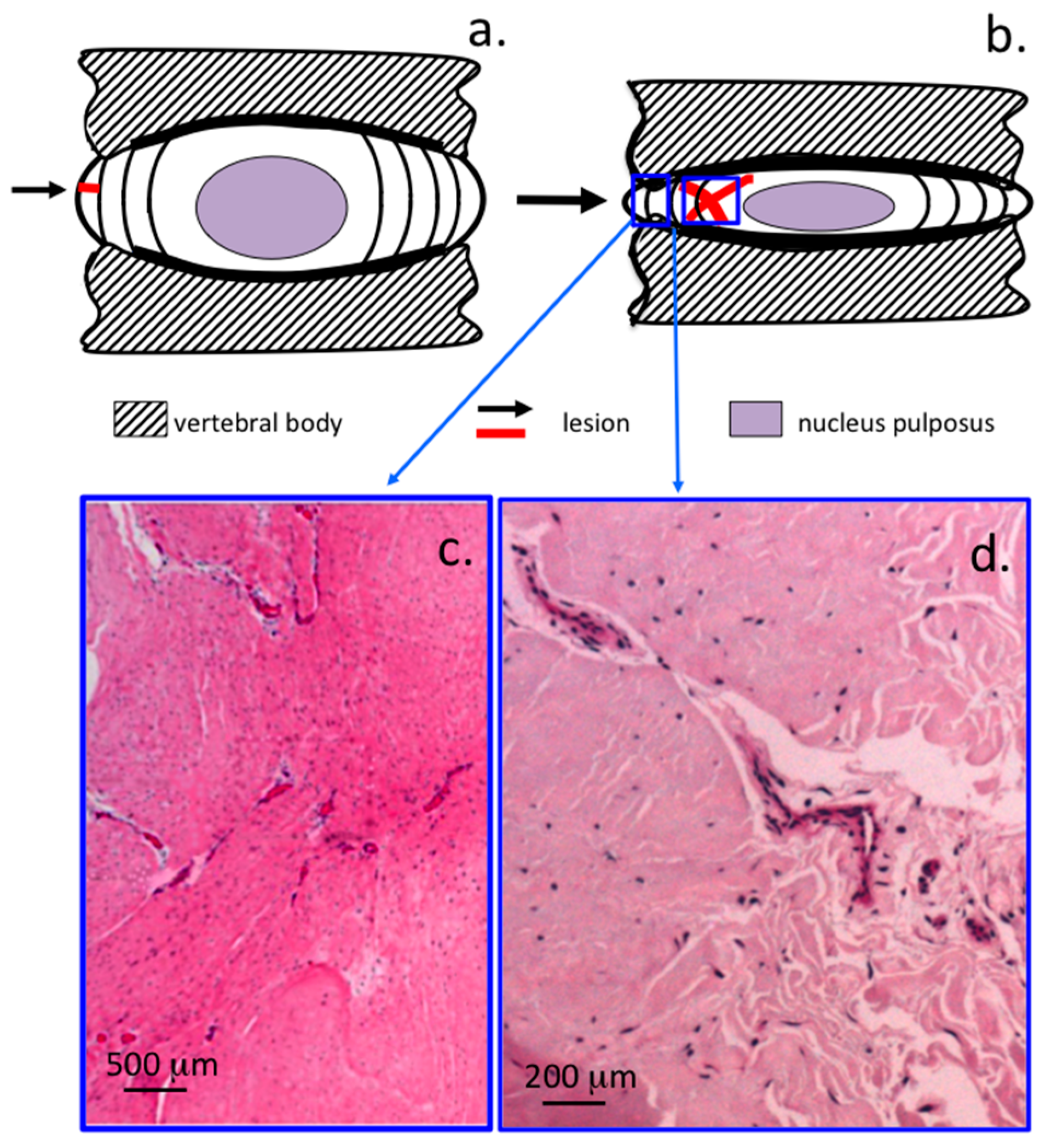 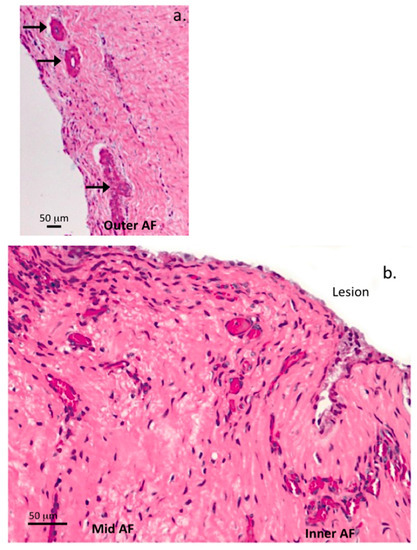 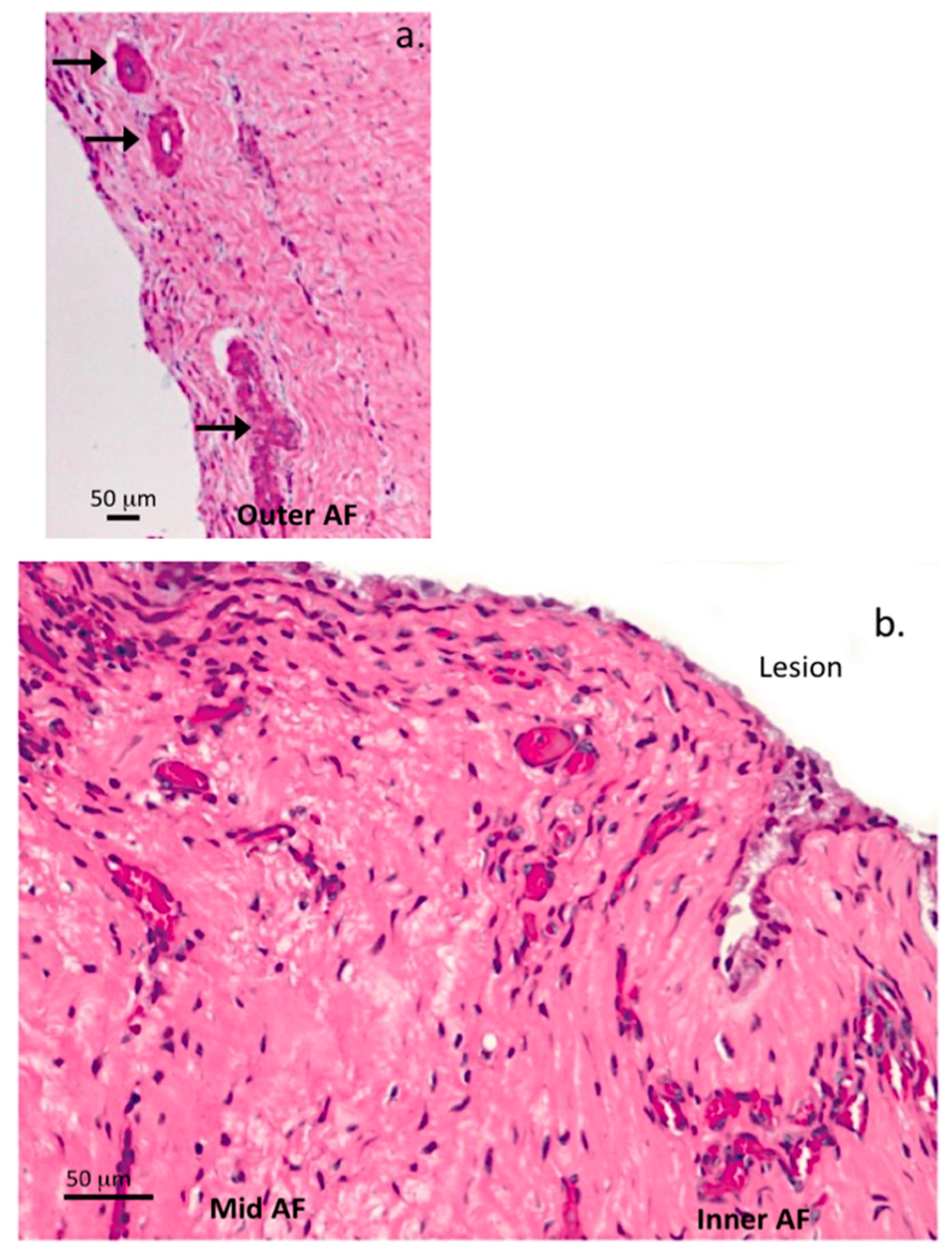 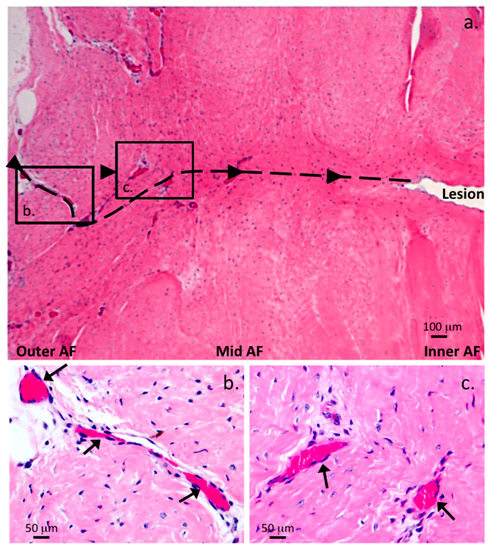 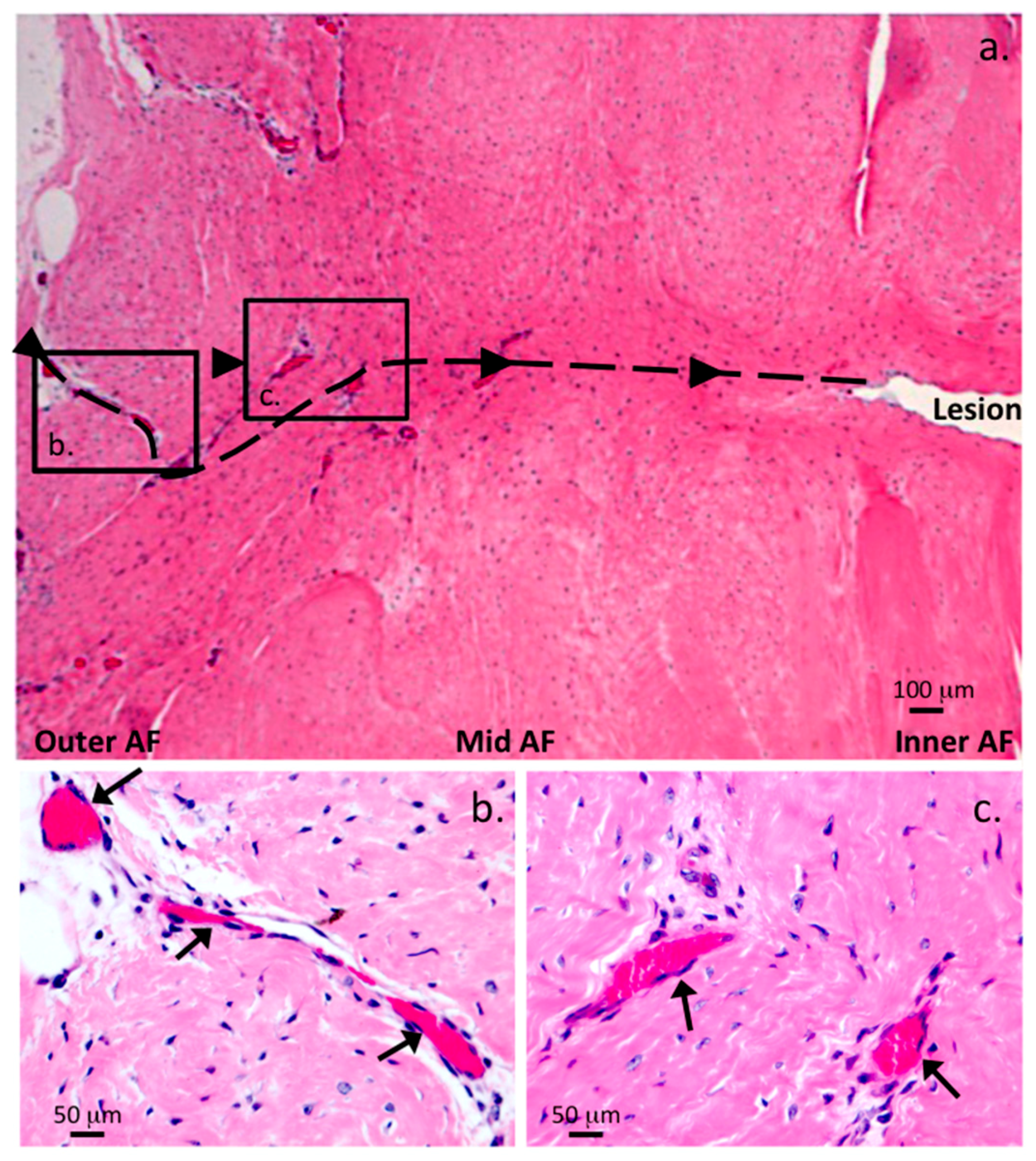 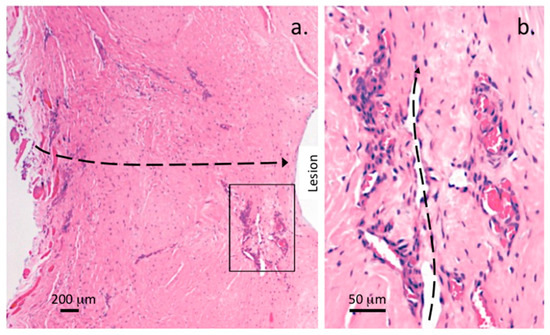 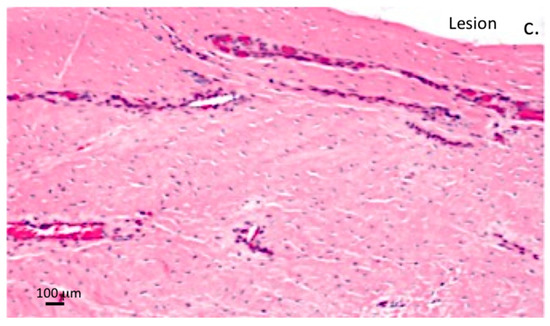 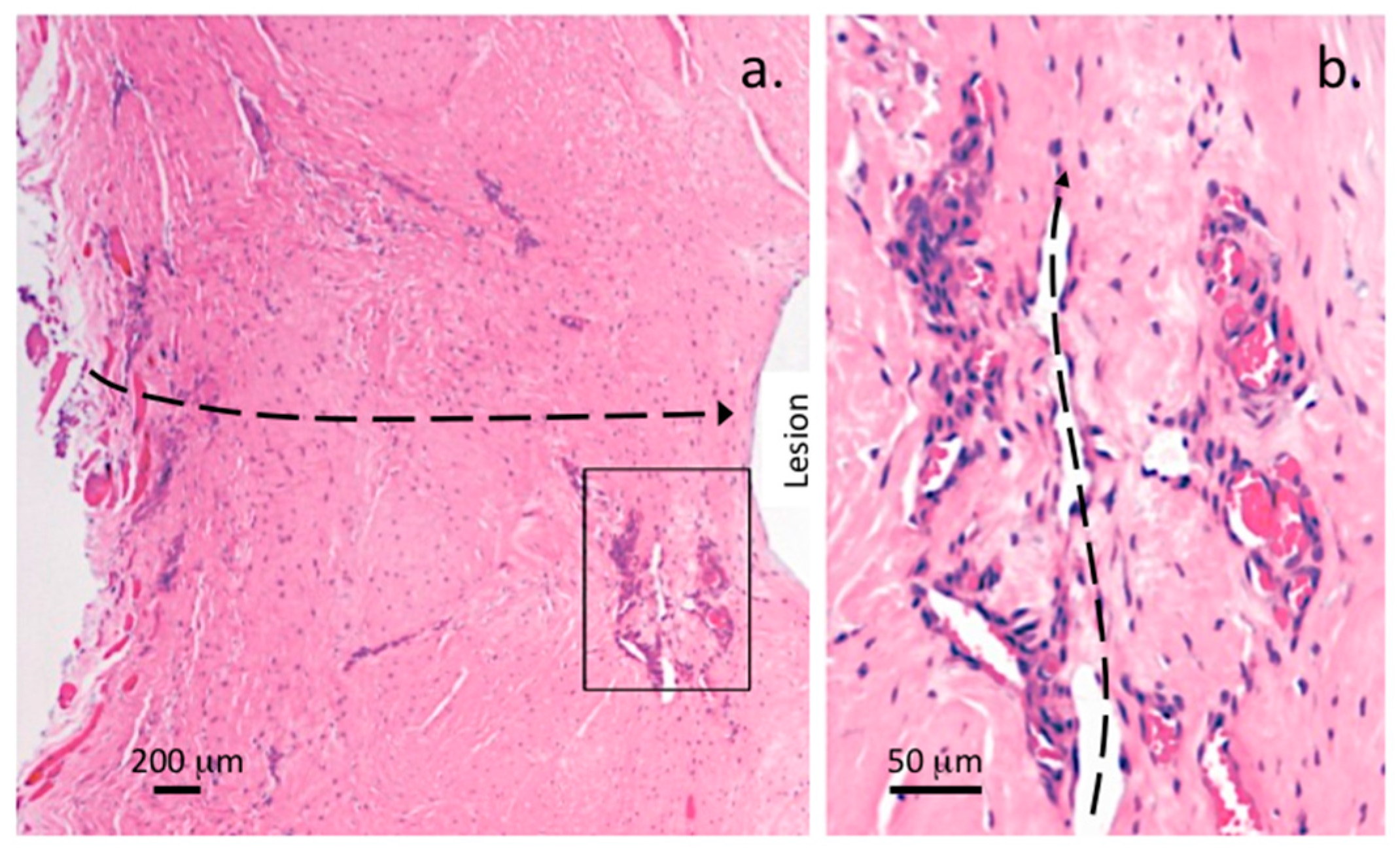 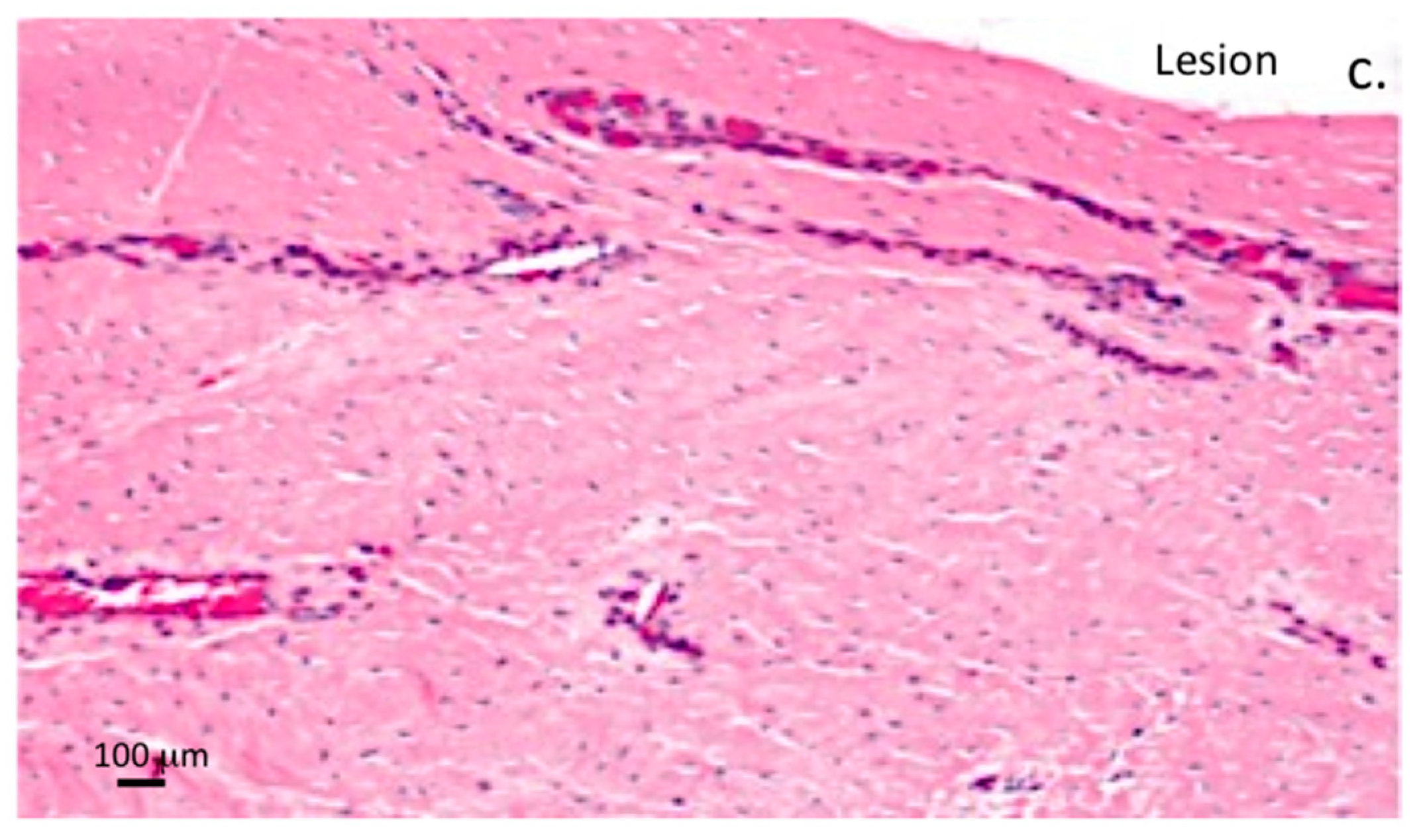 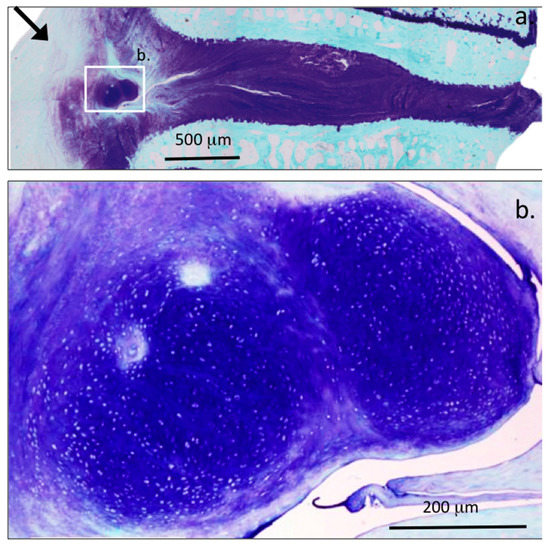 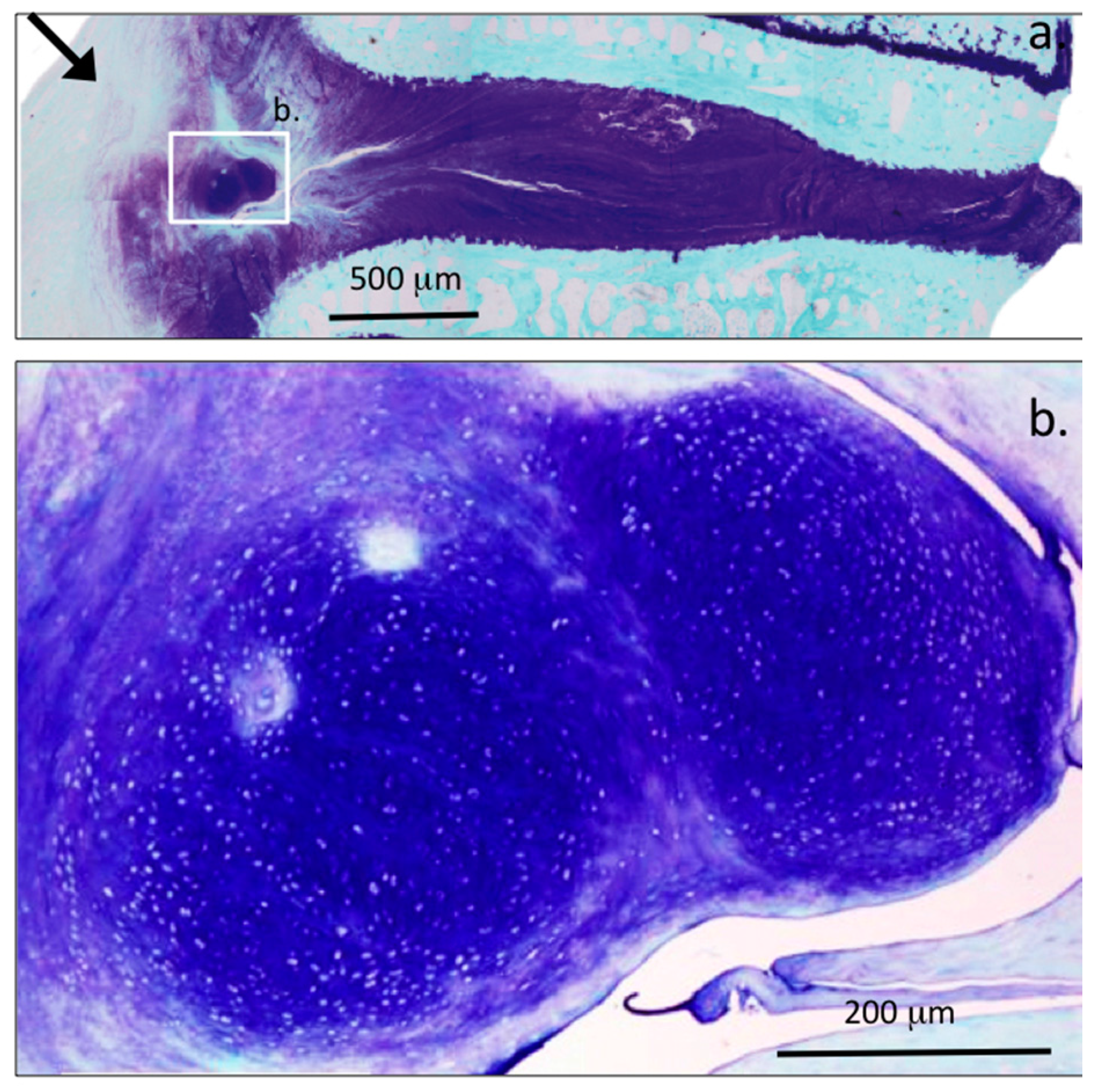 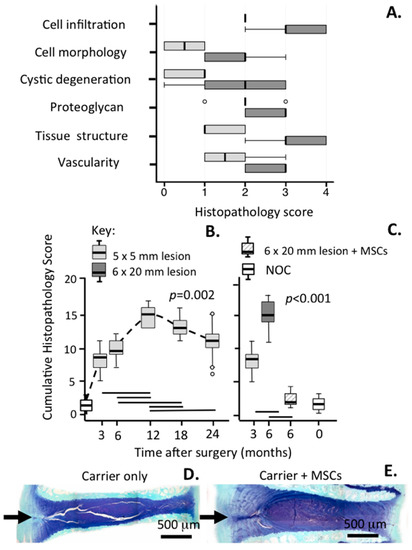 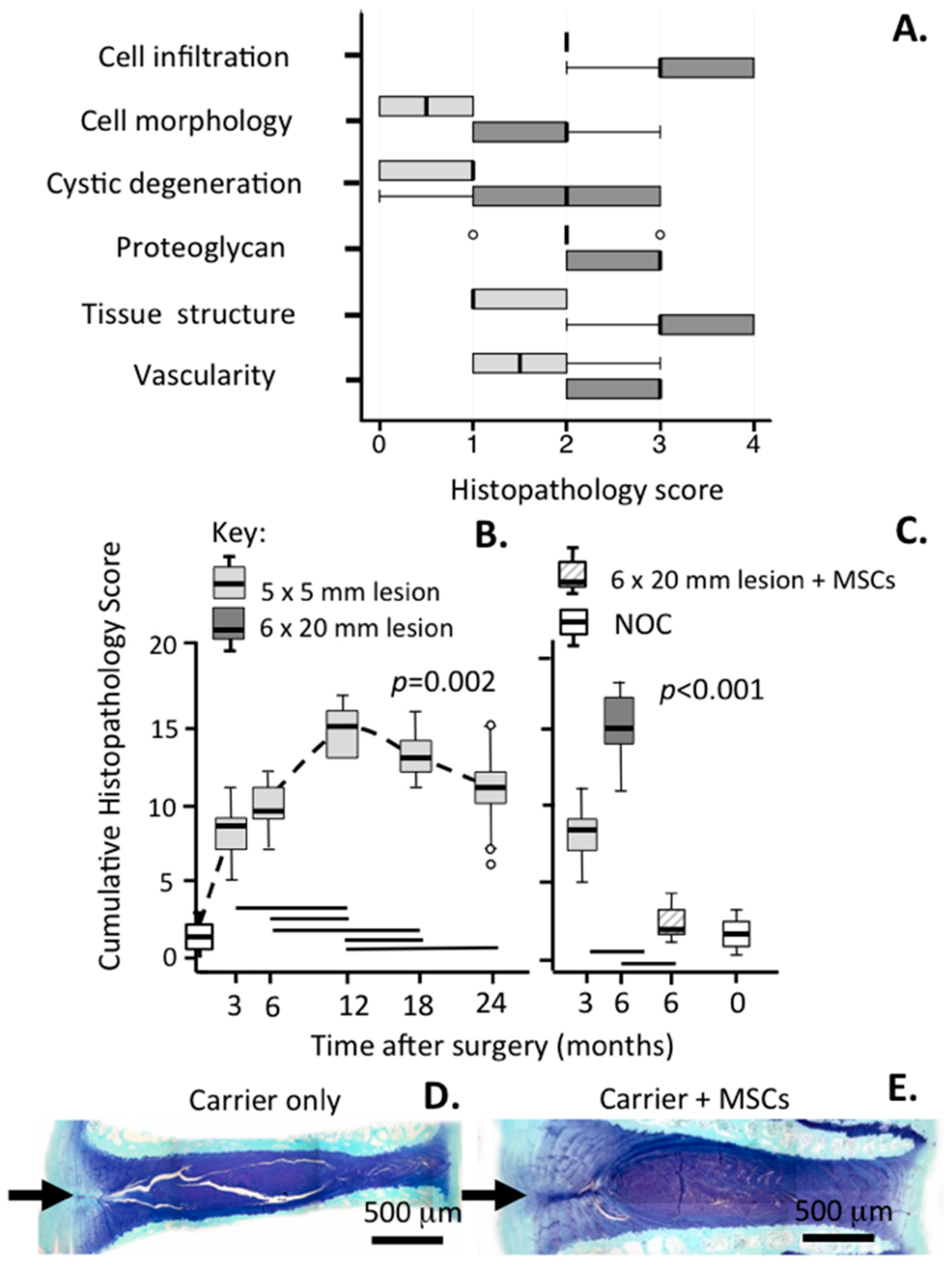