Anti-Fibrotic Effect of Losartan, an Angiotensin II Receptor Blocker, Is Mediated through Inhibition of ER Stress via Up-Regulation of SIRT1, Followed by Induction of HO-1 and Thioredoxin

Renal fibrosis, particularly tubulointerstitial fibrosis, is considered to be a central event in the progression of chronic kidney diseases, regardless of the original cause of the kidney disease. Therefore, renal fibrosis is a reliable predictor and a major determinant of renal insufficiency. However, the underlying mechanism has not been completely understood. The endoplasmic reticulum (ER) stress refers to physiological or pathological states that result in accumulation of misfolded proteins in the ER, which leads to cell stress conditions (ER stress). To mitigate protein misfolding stress, cells activate a homeostatic intracellular signaling network cumulatively called the unfolded protein response (UPR). UPR reestablishes the homeostasis of ER through the activation of three major sensors known as PERK (PKR-like ER kinase), IRE-1 (inositol requiring enzyme-1), and ATF-6 (activating transcription factor 6). The ER chaperone GRP78 (glucose related protein 78) is bound to these three transmembrane sensors. Under ER stress conditions, GRP78 dissociates from the ER stress sensors and binds to misfolded proteins, which leads to activation of these sensors and initiation of the UPR. Therefore, GRP78 has been referred to as a central regulator of ER homeostasis. Although ER stress serves a protective role that allows cells to survive from the noxious stimuli, excessive ER stress triggers apoptosis through CHOP (C/EBP homologous protein) induced by PERK and ATF6 pathways [1,2]. Furthermore, ER stress and UPR are known to contribute to other ER stress-independent cellular responses [3].Therefore, sustained ER stress has been implicated in the development and progression of many chronic diseases [4].
Recently, ER stress has been identified as an important factor in the development of organ fibrosis through activation of pro-apoptotic pathways, induction of epithelial-mesenchymal transition, and promotion of inflammatory responses [5,6]. Thus, inhibition of ER stress may serve as one of the possible therapeutic approaches to organ fibrosis and inflammation. Angiotensin converting enzyme (ACE) inhibitors and angiotensin II receptor blockers (ARBs) are widely used drugs to reduce proteinuria and to attenuate the renal tubulointerstitial fibrosis through inhibition of angiotensin II. In addition to its hemodynamic effects, angiotensin II is also known to be involved in various pro-inflammatory actions including induction of TGF-β, adhesion molecules, chemokines, cytokines, and reactive oxygen species (ROS) generation [7,8]. Therefore, ACE inhibitors and ARBs have been recommended as the first choice of treatment in chronic renal diseases. However, it remains unclear whether ACE inhibitors or ARBs can suppress the ER stress in renal tubular epithelial cells.
Sirtuins are a family of NAD+ (nicotinamide adenine dinucleotide)-dependent protein deacetylases that exert multiple cellular functions by interacting with a wide range of signaling molecules, transcription factors, histones, and enzymes [9]. Mammals have seven different sirtuins assigned as SIRT1-7. SIRT1 (silent mating type information regulation 2 homolog 1) is known to exert a renoprotective effect by inhibiting interstitial fibrosis, inflammation, and apoptosis through deacetylation or interaction with several target proteins [10]. Recently, it has been reported that up-regulation of SIRT1 is able to inhibit the ER stress in renal tubular epithelial cells [11].
Heme oxygenase-1 (HO-1) is a highly inducible isoform enzyme that degrades heme into biliverdin, carbon monoxide (CO), and iron, which have anti-oxidant, anti-apoptotic, and anti-inflammatory properties [12]. Thioredoxin is a 12-kD oxidoreductase enzyme that acts as an antioxidant by facilitating the reduction of other proteins by cysteine thiol-disulfide exchange [13]. It has been shown that two antioxidant systems can protect cells from reactive oxygen species (ROS)-induced oxidative damage. In addition, HO-1 and thioredoxin have been implicated as modulators in inhibition of ER stress [14,15].
However, the potential effects of ACE inhibitors or ARBs on the expression of SIRT1, HO-1, and thioredoxin have not been well studied. Since ACE inhibitors and ARBs are drugs commonly prescribed for the prevention of progression of kidney injury, it would be interesting to identify the effects of ACE inhibitors or ARBs on ER stress, SIRT1, HO-1, and thioredoxin.
We postulated that the anti-fibrotic effect of ARBs might be mediated through the inhibition of ER stress via up-regulation of SIRT1, followed by induction of HO-1 and thioredoxin in renal tubular cells. We examined the effects of losartan, a classic drug of ARBs, on the ER stress induced by both chemical inducers, such as tunicamycin, and non-chemical inducers, such as tumor growth factor-β (TGF-β), angiotensin II, high glucose, and albumin in tubular HK-2 cells. We also examined whether the inhibitory effect of losartan on ER stress was mediated through up-regulation of SIRT1 via induction of HO-1 and thioredoxin. We further investigated the in vivo effects of losartan with or without sirtinol (an inhibitor of SIRT1) on ER stress and renal fibrosis using a tunicamycin-induced ER stress mouse model and a unilateral ureteral obstruction mouse model.

2.2. Inhibitory Effect of Losartan on the Tunicamycin-Induced ER Stress Was Mediated through Up-Regulation of SIRT1

2.3. Inhibitory Effect of Losartan on the Tunicamycin-Induced ER Stress Was Mediated through Induction of Heme Oxygenase-1 and Thioredoxin

2.4. Inhibitory Effect of Losartan on the Tunicamycin-Induced ER Stress Was Mediated through Up-Regulation of SIRT1, Followed by Induction of HO-1 and Thioredoxin

2.6. Treatment with Losartan Reduced the Renal Tubular Expression of GRP78 and Increased the Expression of HO-1 and Thioredoxin through the Up-Regulation of SIRT1 in a Mouse Model of Tunicamycin-Induced ER Stress

2.8. Treatment with Losartan Reduced the Renal Tubular Expression of GRP78 and Renal Fibrosis through the Up-Regulation of SIRT1 in a Mouse Model of Unilateral Ureteral Obstruction (UUO)

To demonstrate the in vivo inhibitory effect of losartan on the UUO-induced ER stress and renal fibrosis, we performed an animal study using a mouse model of UUO. Treatment with losartan reduced the renal tubular expression of GRP78 and increased the expression of HO-1, thioredoxin, and SIRT1, which were abolished by sirtinol in a mouse model of UUO (p < 0.05). Furthermore, sirtinol blocked the inhibitory effect of losartan on the UUO-induced renal fibrosis (p < 0.05) (Figure 8A). Western blot of renal cortical tissue and collagen deposit score showed the same results (Figure 8B).

All experiments were performed using HK-2 cells, a human proximal tubular cell line [42].HK-2 cells were obtained from the American Type Culture Collection. The media were changed every three days until confluent. Cells were growth-arrested in serum-free medium for 24 h before being used in experiments. To determine whether losartan suppressed the tunicamycin (TM)-induced ER stress, cells were incubated with TM (0.2 µM) with or without losartan (10 µM) for 24 h. To determine whether losartan suppressed the TGF-β-, angiotensin II-, high glucose-, and albumin-induced ER stress, cells were incubated with TGF-β (10 ng/mL), angiotensin II (1 µM), high glucose (30 mM), and albumin (5 mg/mL) for three days and then treated with losartan (10 µM) for two days. Concentrations of TM, TGF-β, angiotensin II, high glucose, and albumin used in our experiments were based on a previous study [14].

Proteins of whole-cell lysates were fractionated by 10% SDS polyacrylamide gels, and transferred onto a nylon membrane. The membranes were blocked with Tris-buffered saline containing 5% non-fat milk, probed with primary antibody for 2 h, followed by peroxidase-conjugated secondary antibody. The blots were developed by using enhanced chemiluminescence system (Amersham Pharmacia Biotech, Arlington, IL, USA). The band intensities were quantified by using a GS-710 densitometer and Quantity One software (version 4.2.1, Bio-Rad, Hercules, CA, USA). The results were normalized to β-actin as an internal control for standardization.

Male mice (C57BL/6), weighing about 20 g, were kept on a 12 h light/dark cycle in a temperature-controlled room, with free access to water and standard chow. A mouse model of tunicamycin-induced ER stress was induced by a single intraperitoneal injection of tunicamycin (TM, 2 mg/kg). In this model, it has been reported that male mice show high induction of ER stress markers such as GRP78 and CHOP with proximal tubular damages in the outer cortex [43]. Mice were randomly divided into four groups: control mice (n = 4), mice with TM injection (TM mouse, n = 4), TM mice with losartan (n = 4), and TM mice with losartan plus sirtinol (5 mg/kg i.p.) (n = 4). Losartan was administered by gavage at 10 mg/kg/day. Mice were euthanized after three days.

UUO model is characterized by interstitial inflammatory cell infiltration, oxidative stress, apoptosis, and fibrosis. It has been known that angiotensin II and TGF-β contribute to UUO-induced renal fibrosis [44]. Furthermore, it has been reported that activation of ER stress is associated with UUO-induced renal apoptosis and fibrosis [18]. Therefore, we used a mouse model of UUO to test the hypothesis that the anti-fibrotic effect of losartan was mediated through the inhibition of ER stress via up-regulation of SIRT1. For induction of unilateral ureteral obstruction, male mice (C57BL/6) weighing about 20 g were anesthetized using evertin (125 mg/kg) and the left ureter was ligated through flank incision. Mice were randomly divided into four groups: control mice (n = 4), mice with UUO (n = 4), mice with UUO plus losartan (n = 4), and mice with UUO plus losartan and sirtinol (5 mg/kg i.p.) (n = 4). Losartan was administered by gavage at 10 mg/kg/day. On the 14th day after UUO surgery, the mice were sacrificed by using CO2. The kidney was fixed in 4% buffered formalin and embedded in paraffin for histological evaluation. Tubulointerstitial fibrosis was assessed by degree of interstitial collagen deposition using Masson trichrome stain [18]. All animal protocols were approved by Institutional Animal Care and Use Committee of Asan Institute for Life Sciences.

Paraffin embedded tissues were cut into 4 um sections and were deparaffinized in xylene and rehydrated in graded ethanol. To block endogenous peroxidase activity, sections were immersed in 0.3% hydrogen peroxide in PBS (phosphate-buffered saline) for 30 min. A microwave-based antigen retrieval method with 10 mmol/L citrate buffer (pH 6.0) for 10 min was done.
Nonspecific binding was blocked in 1% BSA (bovine serum albumin). Sections were then incubated with primary antibodies for GRP78, HO-1, and thioredoxin for 2 h and biotinylated secondary antibodies for 1 h and horseradish peroxidase-streptavidin conjugate for 30 min, followed by detection using DAB (3,3’-diaminobenzidine) stain (Dako, Glostrup, Denmark). The sections were counterstained with hematoxylin.

In conclusion, our study provides new information about the renoprotective effects of losartan, which may serve as the foundation for the targeted therapies designed to reduce ER stress. 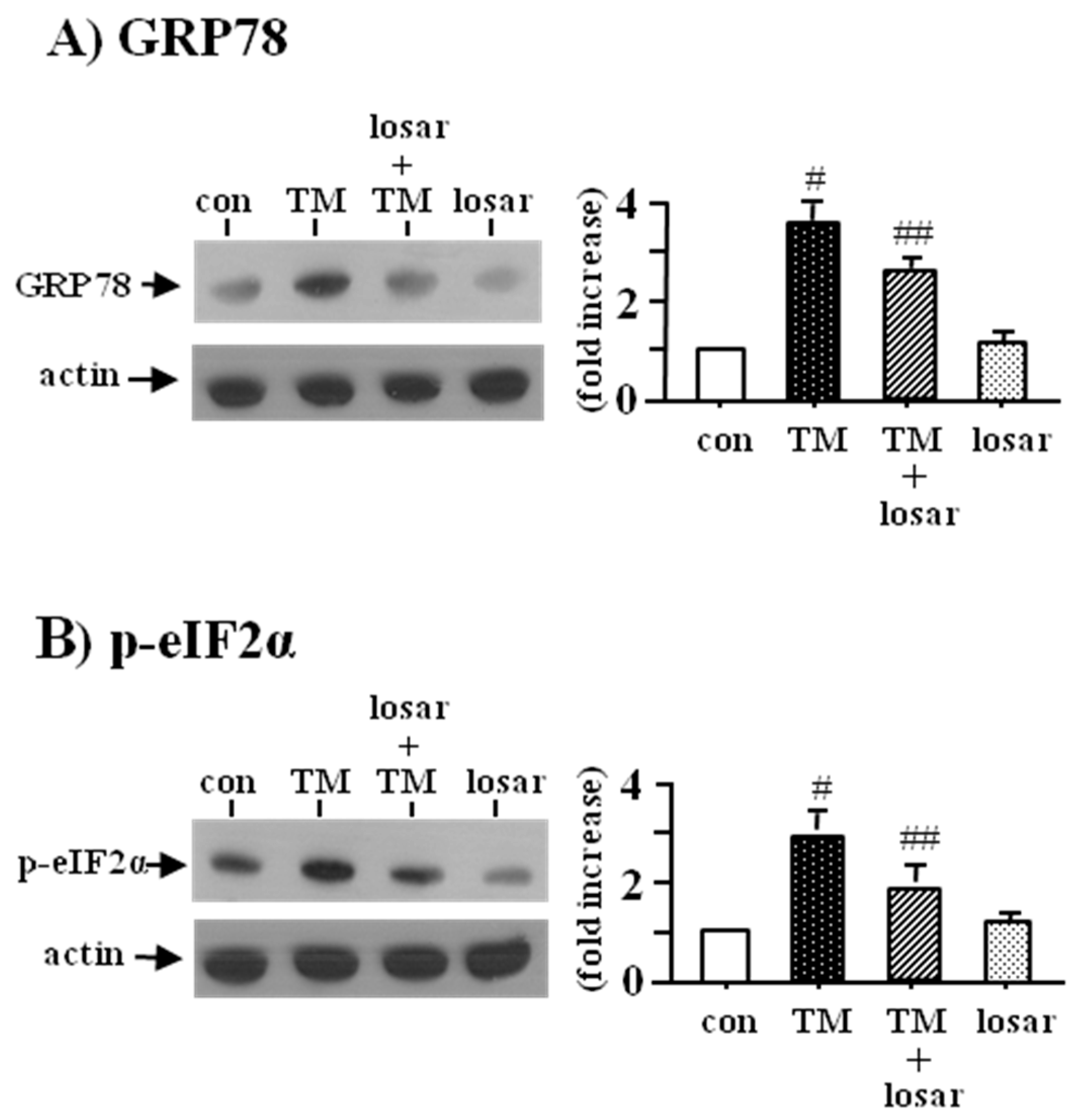 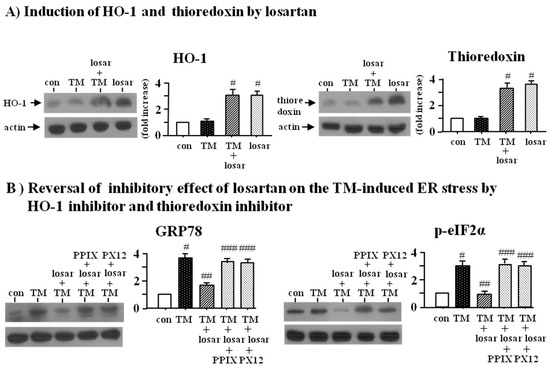 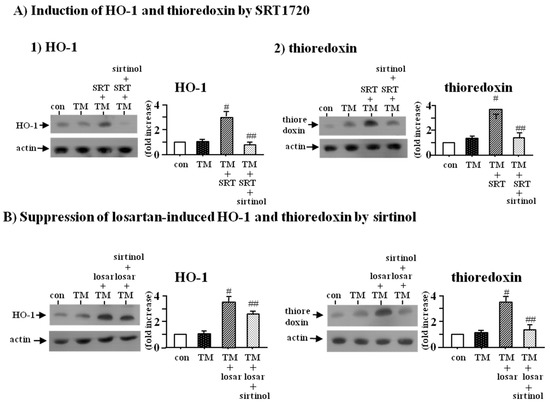 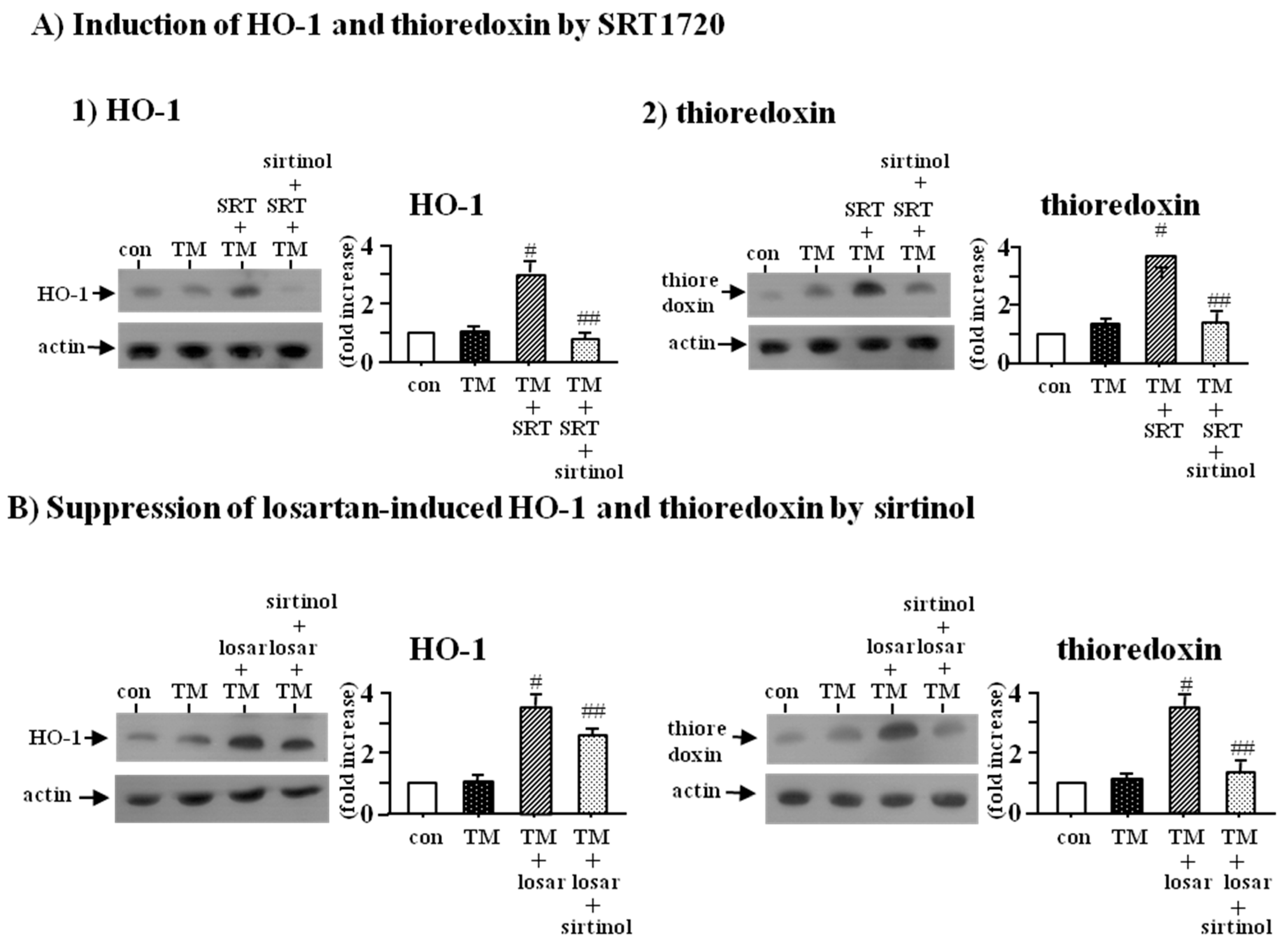 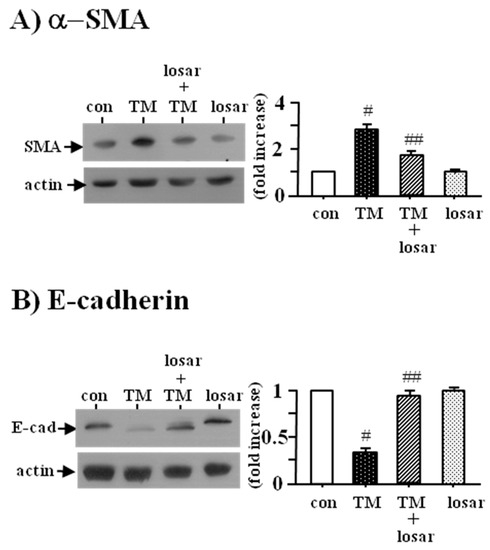 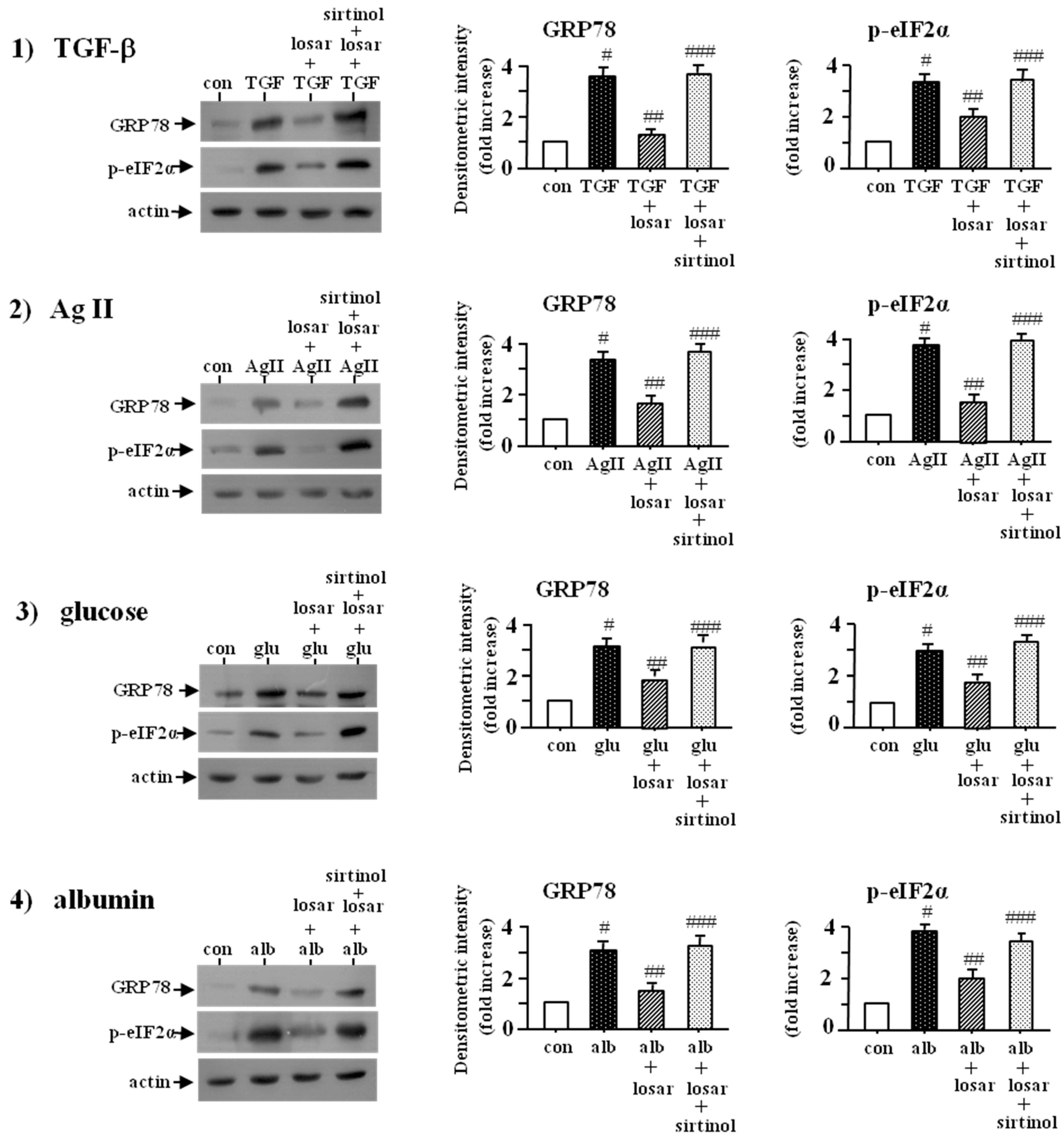 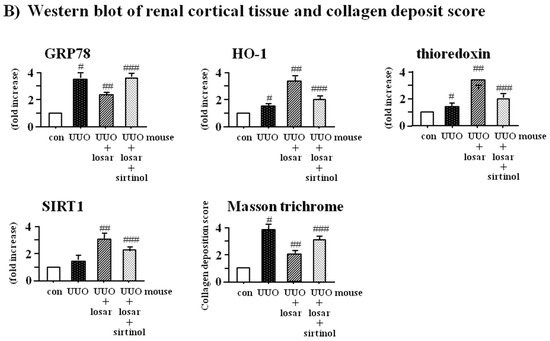