Article
A Novel Mutation in the Fibrinogen Bβ Chain (c.490G>A; End of Exon 3) Causes a Splicing Abnormality and Ultimately Leads to Congenital Hypofibrinogenemia
by

:
We found a novel heterozygous mutation in the fibrinogen Bβ chain (c.490G>A) of a 3-year-old girl with congenital hypofibrinogenemia. To clarify the complex genetic mechanism, we made a mini-gene including a FGB c.490G>A mutation region, transfected it into a Chinese Hamster Ovary (CHO) cell line, and analyzed reverse transcription (RT) products. The assembly process and secretion were examined using recombinant mutant fibrinogen. Direct sequencing demonstrated that the mutant RT product was 99 bp longer than the wild-type product, and an extra 99 bases were derived from intron 3. In recombinant expression, a mutant Bβ-chain was weakly detected in the transfected CHO cell line, and aberrant fibrinogen was secreted into culture media; however, an aberrant Bβ-chain was not detected in plasma. Since the aberrant Bβ-chain was catabolized faster in cells, the aberrant Bβ-chain in a small amount of secreted fibrinogen may catabolize in the bloodstream. FGB c.490G>A indicated the activation of a cryptic splice site causing the insertion of 99 bp in intron 3. This splicing abnormality led to the production of a Bβ-chain possessing 33 aberrant amino acids, including two Cys residues in the coiled-coil domain. Therefore, a splicing abnormality may cause impaired fibrinogen assembly and secretion.
Keywords:
hypofibrinogenemia; FGB; splicing abnormality; cryptic splice site

2.4. Analysis of FGB Gene Transcripts in the CHO Cell Line

In order to verify whether the FGB c.490G>A mutation influences the transcription of mature mRNA, mutant Bβ-chain mRNA was transiently produced in the CHO cell line and analyzed as described in the Materials and Methods section. After RNA extraction and RT-PCR, the mini-gene incorporating the FGB c.490G>A mutation (mutant-type, Mt) and the wild-type (Wt) mini-gene were amplified by the primer sets designed in introns 2 and 4. The results of electrophoresis showed that the Mt band was larger than the Wt band (Figure 2). Direct sequencing demonstrated that the Mt product was 676 bp and, thus, 99 bp longer than the Wt product (577 bp), and the extra 99 bases were derived from intron 3.
We showed the predicted amino acid sequences of Kyoto IX from mini-gene expression results (Figure 3). The splicing abnormality caused by the FGB c.490G>A mutation led to the production of a Bβ-chain possessing 33 aberrant amino acids between Lys133 and Asp134 (mature protein).

We identified a novel heterozygous point mutation, c.490G>A, in FGB in a 3-year-old girl with congenital hypofibrinogenemia (Kyoto IX). Plasma fibrinogen from Kyoto IX had a normal pattern of Aα-, Bβ-, and γ-chains in a Western blot analysis; there was no aberrant Bβ-chain in her plasma. Therefore, we analyzed mRNA sequences derived from a mini-gene of Kyoto IX, and the assembly process and secretion of mutant fibrinogen using recombinant fibrinogen with c.490G>A in FGB.
FGB c.490G>A is a point mutation at the end of exon 3, right next to the 5′ splice donor site. We initially predicted the existence of a simple missense mutation (Asp134Asn) from the results of plasma fibrinogen Western blotting. We then predicted that the splicing error resulted in a translational frameshift and premature termination signal within intron 3, leading to transcript elimination and shorter products than wild-type transcriptional products (Asp134Ser fs33aa-stop) [8,9]. However, our mutant mini-gene with c.490G>A expressed transcripts that were longer than wild-type mini-gene-expressed transcripts by PCR amplification (Figure 2). The results of sequencing analysis showed that the mutation destroyed the splice donor site and yielded a newly spliced product maintaining the original reading frame. Furthermore, the activation of a cryptic splice site in intron 3 and the skip to the 3′ splice-acceptor site intron 3 resulted in the aberrant transcriptional products composed from exon 3, partial intron 3 (99 bp), and exon 4. This result was consistent with that of Splice Site Prediction by the Neural Network (http://www.fruitfly.org/seq_tools/splice.html). The FGB mutations reported to date are mostly missense and nonsense mutations on the insides of exons [7]. On the other hand, few splice-site and frameshift mutations have been identified; all 7 splice-site mutations were in introns only, while all 3 frameshift mutations were deletions and/or insertions [10]. c.490G>A was novel and rare because of the end basal mutation in exon 3 leading to a splice-site abnormality. This is the first study on fibrinogen genes where a mutation at the end of an exon leads to the activation of a cryptic splice site.
In FGB, most of the reported missense and nonsense mutations are localized in the highly conserved globular C-terminal domains of the Bβ-chain, which were previously shown to specifically impair fibrinogen secretion [10]. Our aberrant transcript, Asp134Ser, was a predicted insertion of 33 amino acids derived from intron 3. This region is a coiled-coil domain, and the 33-residue addition may lengthen the Bβ coiled-coil. The deletion of five residues of the coiled-coil domain in the Bβ-chain was previously reported by Brennan SO et al. (Asn137_Glu141del) [11]. As well as the deletion, an addition may result in tension and deform the super coil, changing the distance between the E and D domains. This may be reflected in aberrant polymerization. A missense mutation (Met118Lys) of the initial portion of the coiled-coil domain in the Bβ-chain [12] also led to a conformational change in the fibrinogen molecule by replacing the non-polar residue with the polar residue that may alter the fibrinogen assembly. N-terminal disulfide bonds (AαCys28-AαCys28, γCys8-γCys8, γCys9-γCys9) are important in the docking of the two Aα-Bβ-γ half-molecules for maintain structural integrity. Furthermore, a pair of disulfide ring at either end of each coiled-coil domains of Aα-, Bβ-, and γ-chain are also important in stabilization of fibrinogen molecule [13,14]. Therefore, the disulfide bond mutation, AαCys45Tyr [15] or AαCys45Phe [16], prevents half-molecule dimerization and causes an impairment in intracellular fibrinogen processing. Our aberrant transcripts have two Cys residues as candidate disulfide bond sites. We speculate that the additional two Cys residues in the Bβ chain disturb the formation of disulfide rings or intrachain disulfide bonds in the coiled-coil domain, destroy the tertiary structure of the Bβ-chain and/or Aα-Bβ-γ half molecules, and ultimately impair the assembly and secretion of fibrinogen.
The mutant Bβ-chain was weakly detected in the transfected CHO cell lines, and was secreted to the culture media (Figure 4A–C). However, aberrant fibrinogen was not detected in plasma (Figure 1). In mutant Bβ recombinant expression, two bands were observed by an anti Bβ-chain antibody; one had a higher molecular weight than the normal Bβ-chain, while the other had a similar molecular weight. We considered the former band to be an aberrant Bβ-chain and the latter to be the cleavage product of the aberrant Bβ-chain (Figure 4C,D). The aberrant Bβ-chain was catabolized in cells, and a small amount of secreted fibrinogen containing the aberrant Bβ-chain may catabolize more rapidly in the bloodstream. Therefore, in plasma Western blotting, we speculate that there are a few aberrant Bβ-chains that are not detected, and the degradation product derived from the aberrant Bβ-chain migrated similarly to the normal Bβ-chain band.
In conclusion, the novel heterozygous hypofibrinogenemia, c.490G>A indicated the activation of a cryptic splice site causing the insertion of 99 bp in the intron 3 nucleotide. This mutation led to the insertion of 33 amino acids including two Cys residues, which may form a disulfide bond and ultimately disturb disulfide ring formation. These results suggest that a splicing abnormality that yields a newly spliced product maintaining the original reading frame leads to impaired fibrinogen assembly and secretion.

This study was approved by the Ethical Review Board of Shinshu University School of Medicine (#383, 4 September 2012). After informed consent had been obtained from the patient, blood samples were collected for biochemical and genetic analyses.

4.3. Construction of Mini-Gene and Expression Vectors

DNA fragments spanning from intron 2 to intron 4 of the FGB gene were amplified from patient and control genomic DNA using the primer couples FGB-IVS2-F (5′-CCTATGTGCTATTTTAACAAATGTCC-3′) and FGB-IVS4-R (5′-CACTTAGCATTTTTGTTGTTGTTG-3′). The mini-gene, a 1497-bp genomic fragment, was composed of part of intron 2 and intron 4, and all of exon 3, intron 3, and exon 4 in FGB. The purified PCR product of the mini-gene was inserted into the pSecTaq/FRT/V5-His TOPO® vector and transfected into One Shot® TOP10 Chemically Competent E. coli using the pSecTaq/FRT/V5-His TOPO® TA Expression Kit (Invitrogen, Carlsbad, NM, USA), according to the manufacturer’s instructions. Plasmid DNAs were isolated using the QIAprep Spin Miniprep Kit (QIAGEN N.V., Hulsterweg, The Netherlands) and sequenced as described above. Two selected plasmids inserted by the wild- or mutant-type of FGB were cultured in a large amount of media, and plasmids were purified using a Qiagen Plasmid Maxi Kit (QIAGEN). The sequences of the plasmids were confirmed by direct sequencing according to the manufacturer’s instructions. The plasmids were named Bβ-wild-type (wt) and Bβ-mutant-type (mt) vectors.

The expression vectors Bβ-wt and Bβ-mt were introduced into CHO cell lines using lipofection, as described previously [19,20]. Transfected CHO cell lines were cultured in 5% CO2 at 37 °C. CHO cell lines were harvested 48 h after transfection. Total cellular RNA was extracted from cells using the QIAamp RNA Blood Mini Kit (Qiagen), and contaminated DNA was digested using Recombinant DNase I (Takara Bio Inc., Kusatsu, Japan), according to the manufacturer’s instructions. Reverse-transcriptase (RT) reactions were performed in 20 µL of a reaction mixture containing 1 µg of extracted total RNA, 2 µL of RT buffer, 5 µL of 2.5 mmol/L dNTP mixture, 1 µL of 500 µg/mL oligo dT, 0.2 µL of 0.1 mol/L dithiothreitol, and 0.5 µL of 200 U/µL Moloney murine leukemia virus (M-MLV) RT at 42 °C for 1 h. After the RT reaction, cDNA was amplified by PCR using the two pairs of primers that were used in the PCR of the fragment DNA Bβ-chain gene under the following conditions: 30 cycles at 95 °C for 30 s, 60 °C for 1 min, and 72 °C for 2 min, preceded by 95 °C for 10 min, followed by 72 °C for 30 min. The amplified products were separated by electrophoresis on 1% agarose gels and purified from the gels using the Gene Clean II Kit (Funakoshi, Tokyo, Japan). DNA fragments were sequenced as described above using the primers that were used for the PCR of the patient’s genomic Bβ-chain gene.

Recombinant mutant fibrinogens were prepared as described previously [21,22]. Briefly, the mutant Bβ-fibrinogen expression vector was prepared by the insertion of the 99-bp nucleotides of intron 3 into the pMLP-Bβ plasmid (kindly provided by Lord ST, University of North Carolina, Chapel Hill, NC, USA), which contained wild-type Bβ-chain cDNA, with restriction enzymes (Eco81I in exon 2 and Bst1107I in exon 5).
The resultant mutant and normal expression vectors were co-transfected with the histidinol selection plasmid (pMSVhis) into CHO cell lines that expressed normal human fibrinogen Aα- and γ-chains (Aαγ CHO cell-lines) using a standard calcium–phosphate co-precipitation method [23]. The cell lines were designated as mutant Bβ- and normal Bβ-CHO cell lines, respectively. Cells were cultured and colonies were selected on histidinol (Aldrich Chem. Co., Milwaukee, WI, USA), as described elsewhere [18]. Fibrinogen concentrations in cell lysates or culture media from the selected clones were measured by ELISA, and the assembly of fibrinogen and/or synthesis of three polypeptide chains in the cell lysate was analyzed by SDS-PAGE and a Western blot analysis, as described previously [23].

The significance of differences in fibrinogen synthesis and secretion between mutant Bβ- and normal Bβ-CHO cell lines was analyzed using a one-way Mann–Whitney U test. A difference was considered to be significant when p < 0.05. 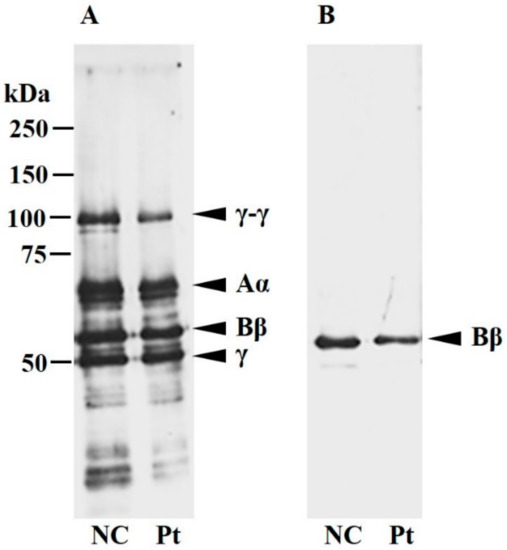 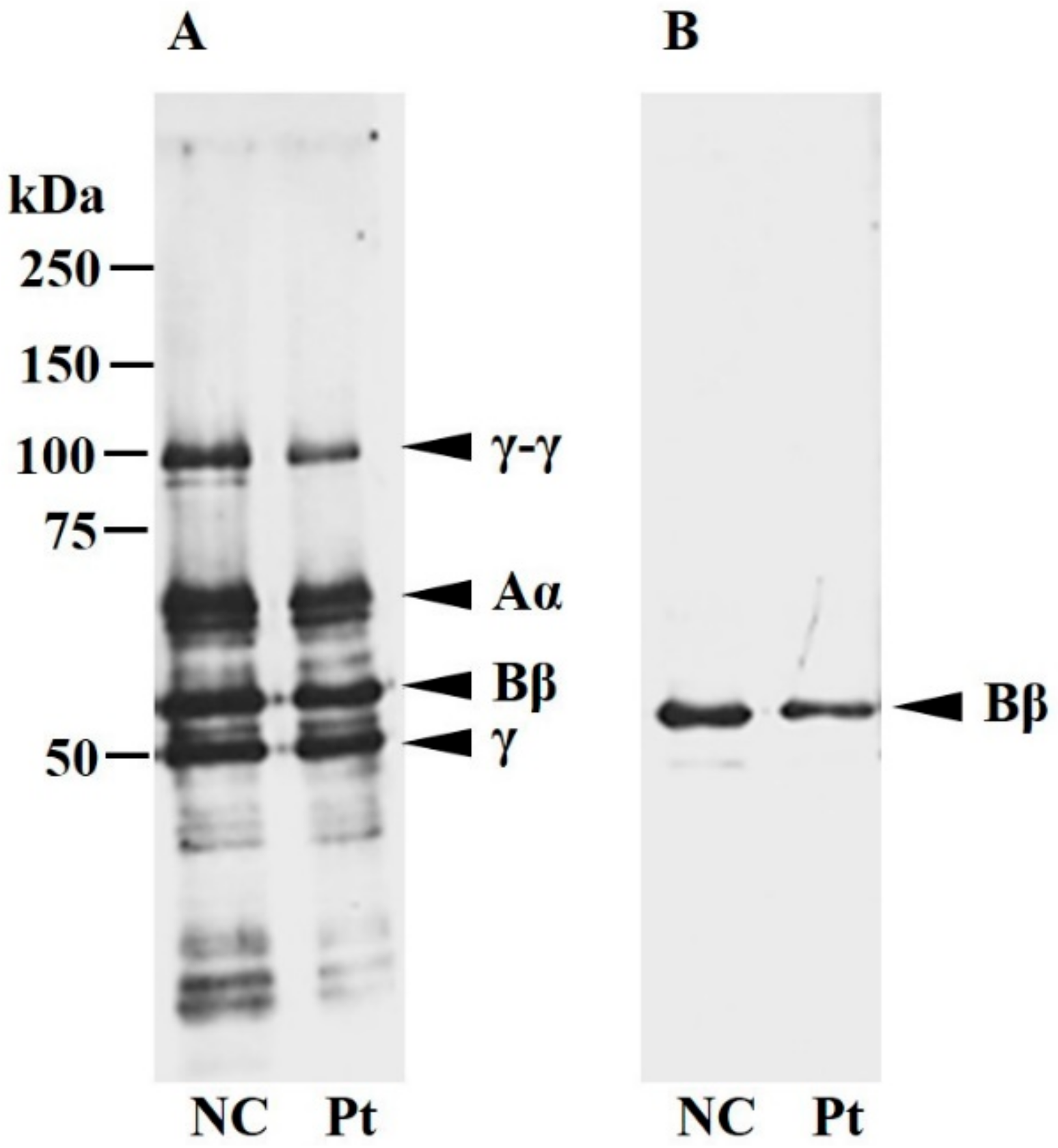 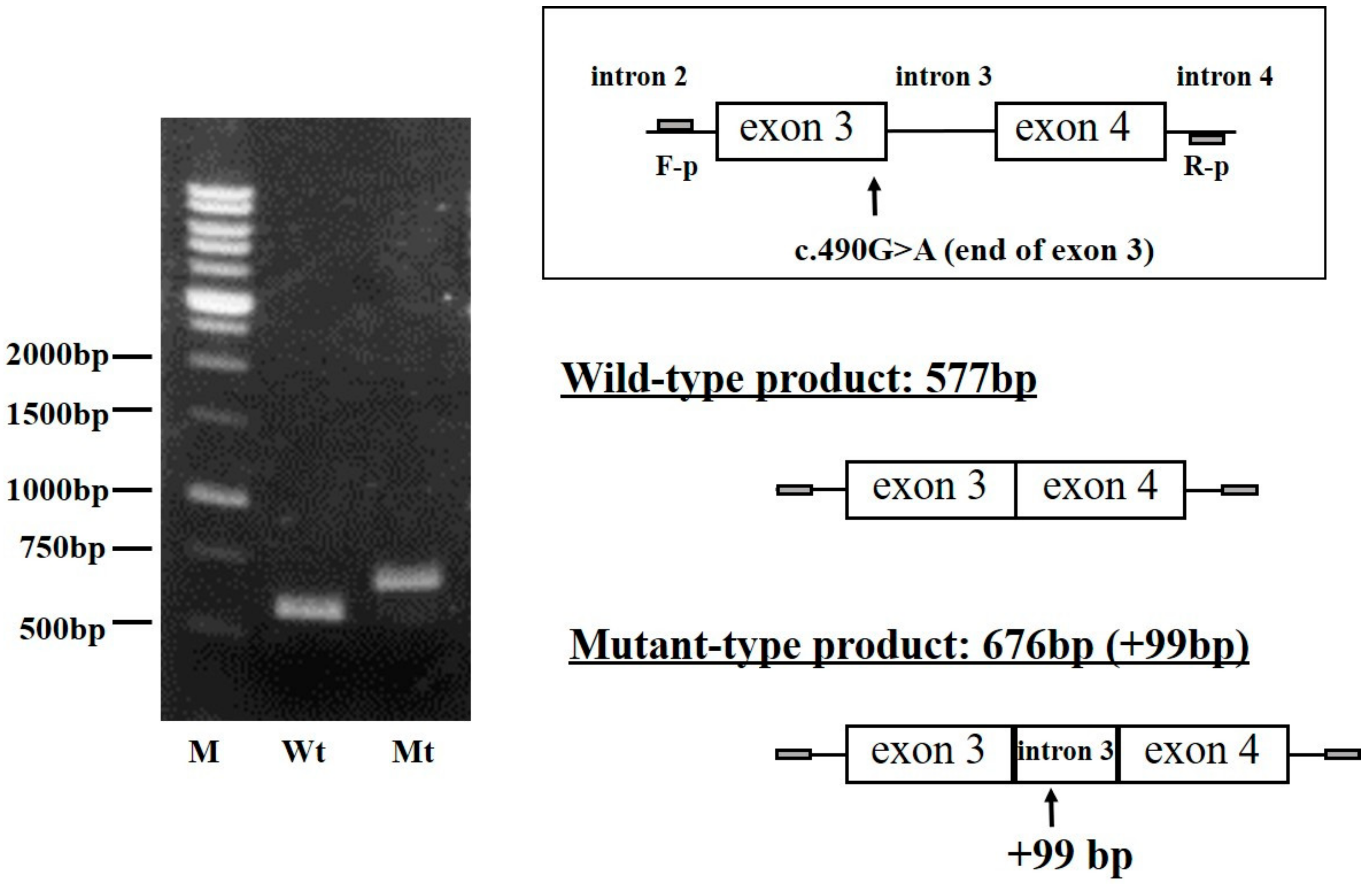