Relax, Cool Down and Scaffold: How to Restore Surface Expression of Folding-Deficient Mutant GPCRs and SLC6 Transporters

Many diseases arise from mutations, which impair protein folding. The study of folding-deficient variants of G protein-coupled receptors and solute carrier 6 (SLC6) transporters has shed light on the folding trajectory, how it is monitored and how misfolding can be remedied. Reducing the temperature lowers the energy barrier between folding intermediates and thereby eliminates stalling along the folding trajectory. For obvious reasons, cooling down is not a therapeutic option. One approach to rescue misfolded variants is to use membrane-permeable orthosteric ligands. Antagonists of GPCRs are—in many instances—effective pharmacochaperones: they restore cell surface expression provided that they enter cells and bind to folding intermediates. Pharmacochaperoning of SLC6 transporters is less readily achieved because the ionic conditions in the endoplasmic reticulum (ER) are not conducive to binding of typical inhibitors. The second approach is to target the heat-shock protein (HSP) relay, which monitors the folding trajectory on the cytosolic side. Importantly, orthosteric ligands and HSP-inhibitors are not mutually exclusive. In fact, pharmacochaperones and HSP-inhibitors can act in an additive or synergistic manner. This was exemplified by rescuing disease-causing, folding-deficient variants of the human dopamine transporters with the HSP70 inhibitor pifithrin-μ and the pharmacochaperone noribogaine in Drosophila melanogaster.
Keywords: G protein coupled receptors/GPCRs; solute carrier 6/SLC6; misfolding; heat-shock protein relay; pharmacochaperoning; heat-shock protein inhibitors G protein coupled receptors/GPCRs; solute carrier 6/SLC6; misfolding; heat-shock protein relay; pharmacochaperoning; heat-shock protein inhibitors

Pharmacological chaperoning or pharmacochaperoning refers to the ability of small molecules to increase the expression of their target protein by enhancing productive folding [1,2]. Several pharmacochaperones have recently been approved for clinical use; prominent examples include migalastat and lumacaftor, which restore folding of some mutants of lysosomal α-galactosidase in Fabry’s disease [3] and of CFTR-ΔF508, the most frequently mutated variant of the cystic fibrosis transmembrane conductance regulator (CFTR/ABC-C7) [4]. It has, however, been known for some 40 years that antagonists can enhance the expression of their cognate receptors. This was originally observed in people who had been treated with the β-adrenergic antagonist propranolol: sudden cessation of β-adrenergic receptor blockade resulted in a pronounced increase in angina pectoris attacks and in frequent myocardial infarctions [5,6]. It was subsequently appreciated that this “propranolol withdrawal rebound” was accounted for by elevated β-adrenergic receptor levels at the cell surface in both people [7] and experimental animals [8]. Originally, it was thought that these increase surface levels reflected a reduced internalization rate of the antagonist-bound β-adrenergic receptors. However, it is now clear that the antagonists act in the endoplasmic reticulum (ER); three observations support this conclusion: (i) the pharmacochaperoning action is contingent on the cell permeability of the antagonist. Landiolol, which is hydrophilic and poorly enters cells, fails to increase the cell surface levels of β1-adrenergic receptors; in contrast, esmolol and propranolol—two antagonists that readily enter cells—promote cell surface expression of the receptor [9]. The action is specific because the non-selective antagonist exerts its actions on both β1- and β2-receptors, while the action of the β1-selective antagonist is confined to β1-receptors [9]; (ii) The pharmacochaperoning action is dependent on a functional ER export machinery: if the formation of COPII (coatomer protein complex II) coat is disrupted by siRNA-dependent depletion of the cargo receptors SEC24A-D, both propranolol and esmolol fail to increase receptor levels at the cell surface [9]; (iii) The antagonist-induced export from the ER can also be directly visualised under the microscope: within an hour after antagonist application, the refolded receptor is delivered to and concentrated in the Golgi apparatus [10]. Based on these and related findings, it is safe to conclude that cell-permeable ligands act on their targets within the secretory pathway to increase the rate of their delivery to the cell surface [11].
Sickle cell anemia was the first disease appreciated to result from protein misfolding due to a point mutation (E6V of the globin β-chain). In fact, the term molecular medicine was coined to highlight the paradigm shift that arose from the insights into protein misfolding [12]. Sickle cell anaemia can be considered a highly prevalent monogenic folding disease [13]. In all other instances, individual mutant alleles, which encode a folding-deficient version of a protein, are rare. However, collectively, folding diseases account for a large fraction of monogenic diseases. It is also clear that the currently known number must be an underestimate. G protein-coupled receptors (GPCRs) and solute carriers (SLC) comprise the largest and second largest family of membrane proteins with some 800 and 400 members encoded by the human genome, respectively. Thus, collectively, they account for one-fifth of the roughly 6000 membrane proteins. In folding-deficient mutants of GPCRs, the approach to pharmacochaperoning is—in principle—straightforward: antagonist ligands are predicted to act as pharmacochaperones. This prediction was first verified for misfolded V2-vasopressin receptor mutants, which give rise to diabetes insipidus [14]. Transporters are more challenging (see below). There is a long list of mutations that have been shown to result in misfolding of GPCRs [15]; however, it is clear that this list is not exhaustive, because the number of identified mutants keeps growing. This is also true for transporters of the SLC family. To illustrate the point, we selected those nonsynonymous coding mutations reported in the SLC6 family, which give rise to bona fide misfolded proteins. It is evident from the graphic representation in Figure 1 that the cumulative number of disease-associated, folding-deficient mutant has been continuously increasing over the past two decades. Based on this snapshot, it is safe to posit that disease-associated folding-deficient mutants will be identified in each family of membrane proteins. This is also consistent with a large survey covering 1200 human proteins and 2477 disease-associated missense mutations thereof: at least one-third of these result in a folding deficiency [16].

2. The C-Terminus as a Folding Checkpoint

H.M. Mazhar Asjad is a recipient of a fellowship from the Higher Education Commission of Pakistan; Shahrooz Nasrollahi-Shirazi is supported by the doctoral programme CCHD (Cell Communication in Haelth and Disease), which is jointly funded by the Austrian Science Fund (W1205) and the Medical University of Vienna. Work from the authors’ laboratory is funded by grants of the Austrian Science Fund (P27518-B27 and SFB35-10 to Sonja Sucic and Michael Freissmuth, respectively).

All authors contributed to writing the text and approved the final version. 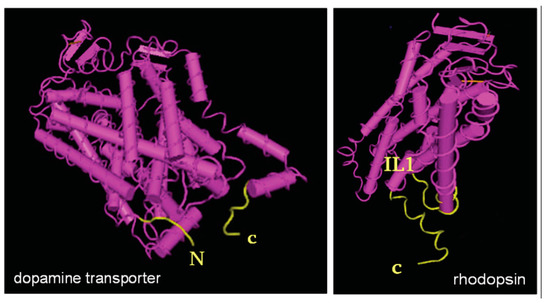