Telomeres and Telomerase in Hematopoietic Dysfunction: Prognostic Implications and Pharmacological Interventions
Next Article in Special Issue

Alterations in Rat Accumbens Endocannabinoid and GABA Content during Fentanyl Treatment: The Role of Ghrelin
Previous Article in Journal

The activation of the transcription factor Nrf2 inhibits neuropathy and modulates the activity of delta-opioid receptors (DOR) in type 2 diabetic mice but the impact of Nrf2/HO-1 pathway on the antinociceptive actions of cannabinoid 2 receptors (CB2R) has not been assessed. Using male mice BKS.Cg-m+/+Leprdb/J (db/db) we investigated if treatment with cobalt protoporphyrin IX (CoPP), an HO-1 inductor, inhibited mechanical allodynia, hyperglycemia and obesity associated to type 2 diabetes. The antinociceptive effects of JWH-015 and JWH-133 (CB2R agonists) administered with and without CoPP or sulforaphane (SFN), a Nrf2 transcription factor activator, have been also evaluated. The expression of Nrf2, HO-1, NAD(P)H: quinone oxidoreductase 1 (NQO1) and c-Jun N-terminal kinase (JNK) in sciatic nerve and that of the CB2R on the dorsal root ganglia from animals treated with CoPP and/or SFN were assessed. CoPP treatment inhibited allodynia, hyperglycemia and body weight gain in db/db mice by enhancing HO-1/NQO1 levels and reducing JNK phosphorylation. Both CoPP and SFN improved the antiallodynic effects of JWH-015 and JWH-133 and expression of CB2R in db/db mice. Therefore, we concluded that the activation of antioxidant Nrf2/HO-1 pathway potentiate the effects of CB2R agonists and might be suitable for the treatment of painful neuropathy linked to type 2 diabetes.
Keywords: antinociception; cannabinoid receptors; diabetic neuropathy; heme oxygenase 1; NAD(P)H: quinone oxidoreductase 1; Nrf2 transcription factor antinociception; cannabinoid receptors; diabetic neuropathy; heme oxygenase 1; NAD(P)H: quinone oxidoreductase 1; Nrf2 transcription factor

Diabetic neuropathy is a serious disorder associated with diabetes, which diminishes the quality of life [1]. It is often described as a tingling or burning sensation that is accompanied by allodynia and hyperalgesia [2]. However, and despite being an important problem for diabetic patients, current treatments are not fully effective [3].
Oxidative stress and inflammation caused by hyperglycemia played a prominent role in the pathogenesis of diabetes. Both are involved in the neurochemical, metabolic, and vascular alterations on the peripheral nerves occasioning damages and consequent peripheral neuropathy in diabetic patients [2,4]. Interestedly, the enzyme heme oxygenase 1 (HO-1) participates in the mitigation of deleterious effects generated by oxidative stress [5]. That is, the overexpression of HO-1 diminishes oxidative stress and inflammatory responses activated by hyperglycemia [6]. The activation of HO-1 also caused powerful antinociceptive effects during acute, inflammatory, visceral and neuropathic pain [7,8,9,10], as well as in neuropathy related to type 1 diabetes [11], although the influence of this enzyme on the inhibition of allodynia linked to type 2 diabetes has not evaluated.
Furthermore, another important antioxidant enzyme activated by the transcription factor Nrf2 is the NAD(P)H quinone oxidoreductase 1 (NQO1). The up-regulation of this enzyme modulates oxidative stress and abundant neuro-inflammatory responses also accountable for diabetic neuropathy induction [12,13]. Nevertheless, the effects of CoPP (an HO-1 inducer compound) on the expression of this enzyme in type 2 diabetic animals have not been assessed.
Numerous studies demonstrated that mitogen activated protein kinases (MAPK) participate in the regulation of several chronic diseases including diabetes [14]. That is, the extracellular signal-regulated protein kinase (ERK1/2) and p38 contribute to the pain sensitivity observed in the first stages of type 2 diabetes [15,16]. Increasing evidences also proved that c-Jun N-terminal kinase (JNK) regulates inflammatory and neural plasticity responses caused by nerve injury and type 1 diabetes leading to pain hypersensitivity [17,18]. Moreover, a remarkable activation of JNK in the sciatic nerve from db/db or ob/ob mice contributing to pain sensitivity and insulin resistance was established [19,20]. Nevertheless, the effect of treatment with CoPP on the modulation of JNK activation in db/db mice remains unidentified.
The inhibitory role-played by cannabinoid 2 receptors (CB2R) in neuropathic pain are well documented. A recent investigation demonstrated that the administration of a CB2R agonist (JWH-015) dose dependently inhibited allodynia in 1 diabetic mice [21]. In accordance, other findings also shown that the administration of non-selective CB1R/CB2R agonists (WIN 55,212-2) inhibited painful neuropathy in animals with type 1 or type 2 diabetes [22,23]. In this study, we examined the antinociceptive actions of two selective CB2R agonists in animals with type 2 diabetes.
Moreover, given that oxidative stress induced by hyperglycemia is a key factor for the progress of diabetic neuropathy and that HO-1 triggered by the transcription factor Nrf2 potentiated the effects of delta-opioid receptors (DOR) in type 2 diabetic mice [20], we hypothesized that pre-treatment with CoPP or sulforaphane (SFN), a Nrf2 transcription factor activator, might increase the analgesic efficacy produced by selective CB2R agonists in animals with type 2 diabetes.
Therefore, in BKS.Cg-m+/+Leprdb/J (db/db) male mice which develop type 2 diabetes, with mechanical allodynia, hyperglycemia and obesity from 6-12 weeks of age [20,24,25], we investigated whether treatment with CoPP attenuated them through regulating the Nrf2, HO-1, NQO1 and JNK protein levels in the sciatic nerve of these animals. The contribution of CoPP and SFN on the antiallodynic actions and expression of CB2R in the dorsal root ganglia from db/db mice were also analyzed.

2.2. Effects of CoPP on Mechanical Allodynia

2.3. Effects of CoPP on Blood Glucose Levels and Body Weight

2.6. Effects of CoPP and SFN Treatments on the Antiallodynic Effects of JWH-015 and JWH-133

Figure 5 showed the antiallodynic effects of 0.15 mg/kg of JWH-015 (A) or JWH-133 (B) subcutaneously administered and their respective vehicles in db/db mice pre-treated with 5 mg/kg of CoPP, 10 mg/kg of SFN or vehicle (DMSO 1%) by via intraperitoneal. CoPP and SFN treatments augmented the inhibitory effects of JWH-015 (A) or JWH-133 (B) in comparison to their respective groups treated with vehicle plus vehicle or drug, and to animals receiving CoPP or SFN plus vehicle (p < 0.01, one way ANOVA and Student Newman Keuls test).

2.7. Effects of CoPP and SFN Treatments on CB2R Levels in the Dorsal Root Ganglia of db/db Mice

We employed 8-week old male type 2 diabetic mice (BKS.Cg-m+/+Leprdb/J; db/db) and heterozygotes as controls (db/+) acquired from Charles River Laboratories (France). Mice were accommodated under 12-h/12-h light/dark conditions in a room with controlled temperature of 22 °C and humidity of 66%. Animals with free access to food and water were used after 6 days acclimatization to housing conditions. All experiments were conducted between 9:00 and 17:00 and executed according to the animals guidelines of the European Communities Council (86/609/ECC, 90/679/ECC; 98/81/CEE, 2003/65/EC, and Commission Recommendation 2007/526/EC) and approved by the Comissió d’Etica en l’Experimentació Animal i Humana de la Universitat Autònoma de Barcelona (number: 6266). Maximal exertions to reduce suffering and number of animals employed were made.

Mechanical allodynia was measured by evaluating the hind paw withdrawal response to von Frey filament stimulation, a similar method has been published before [11,20]. Briefly, mice were sited in methacrylate cylinders (20 cm-high, 9 cm-diameter) with a wire grid bottom across which the von Frey filaments (North Coast Medical, Inc., San Jose, CA, USA) with a bending force in the range of 0.008–3.5 g were applied by using an adapted version of up–down paradigm [43]. We start the test with the filament of 0.4 g and the filament of 3.0 g was utilized as a cut-off. The strength of next filament was decreased or increased depending on the answer, and threshold of response was calculated from sequence of filament strength used throughout the up–down procedure using an Excel program (Microsoft Iberia SRL, Barcelona, Spain) which contains curve fitting of the data. Clear paw withdrawal, licking or shaking the paw was considered to be a nociceptive-like response. To obtain appropriate behavioral immobility, animals were habituate for 1 h before testing. Both hind paws were tested. 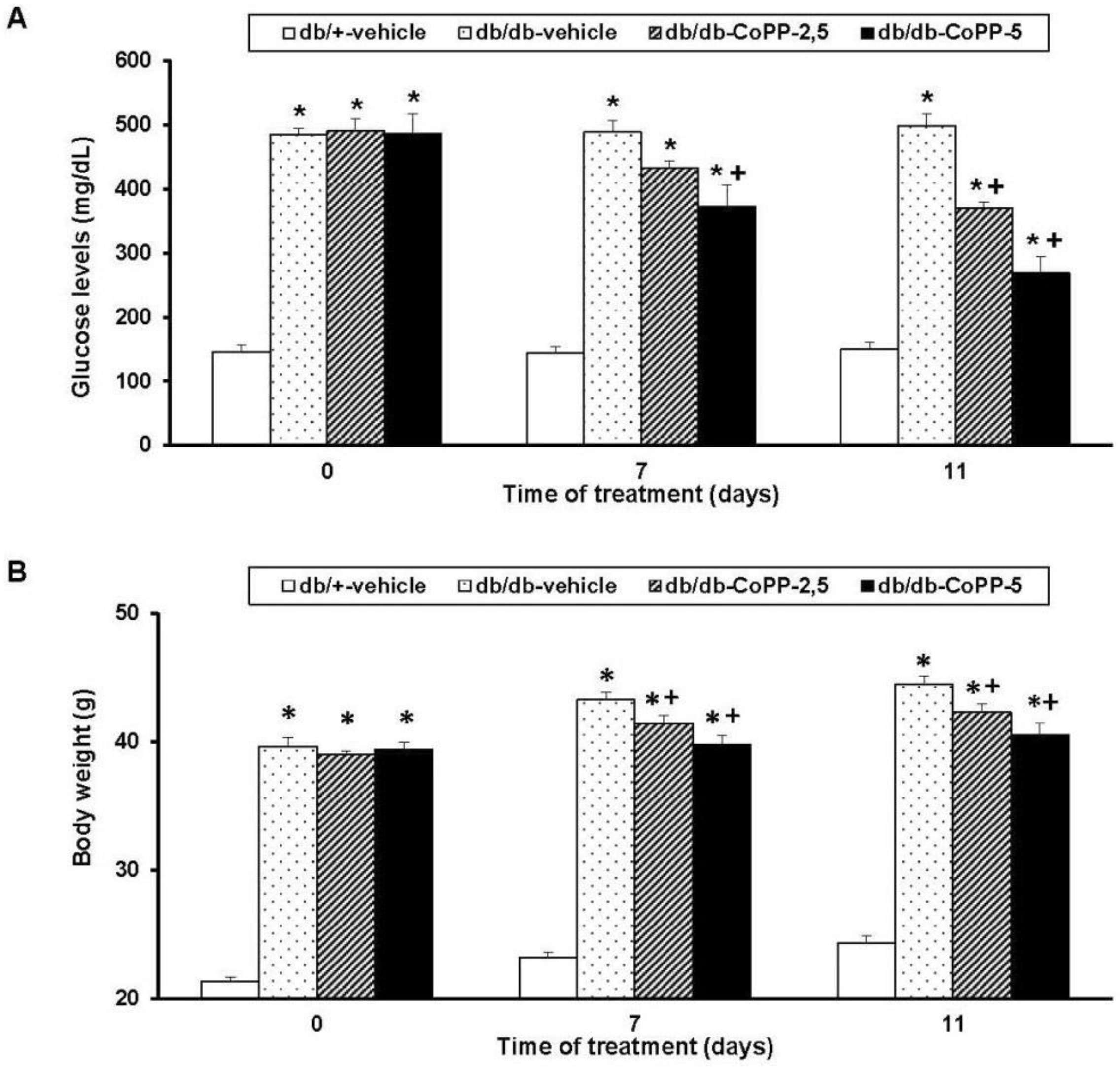 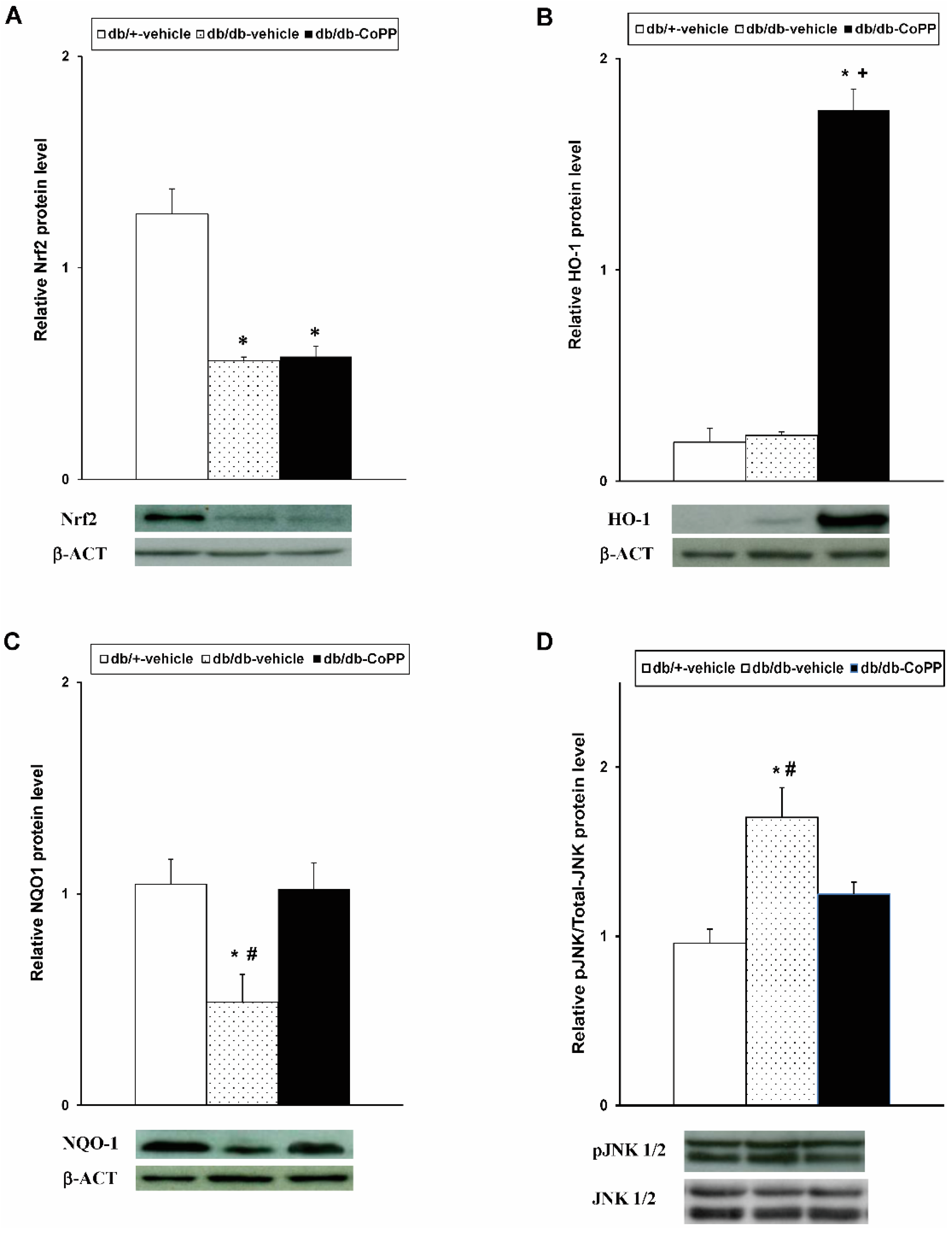 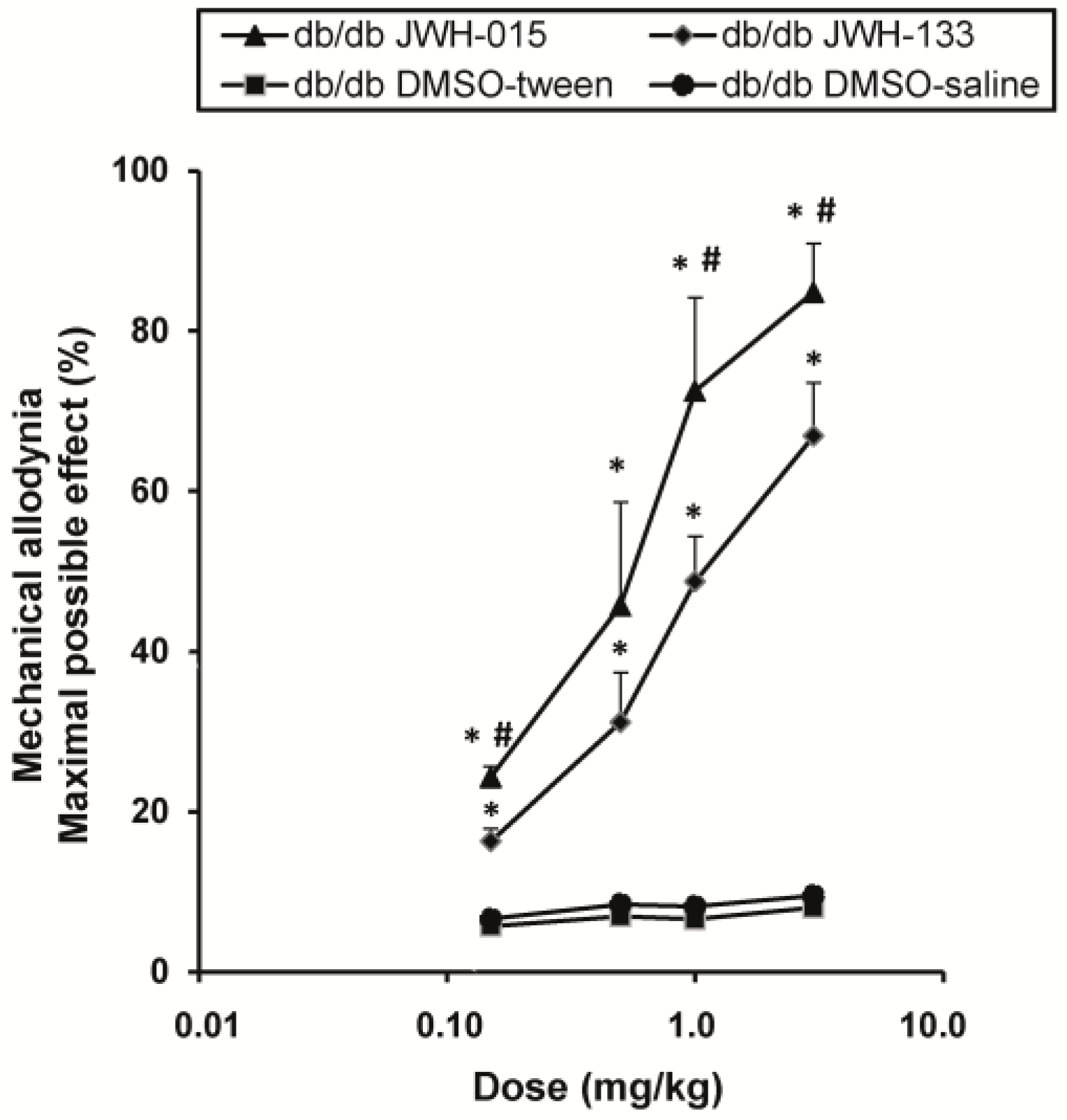 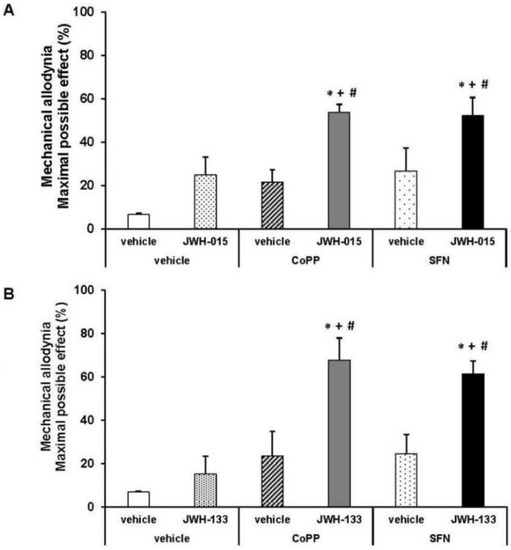 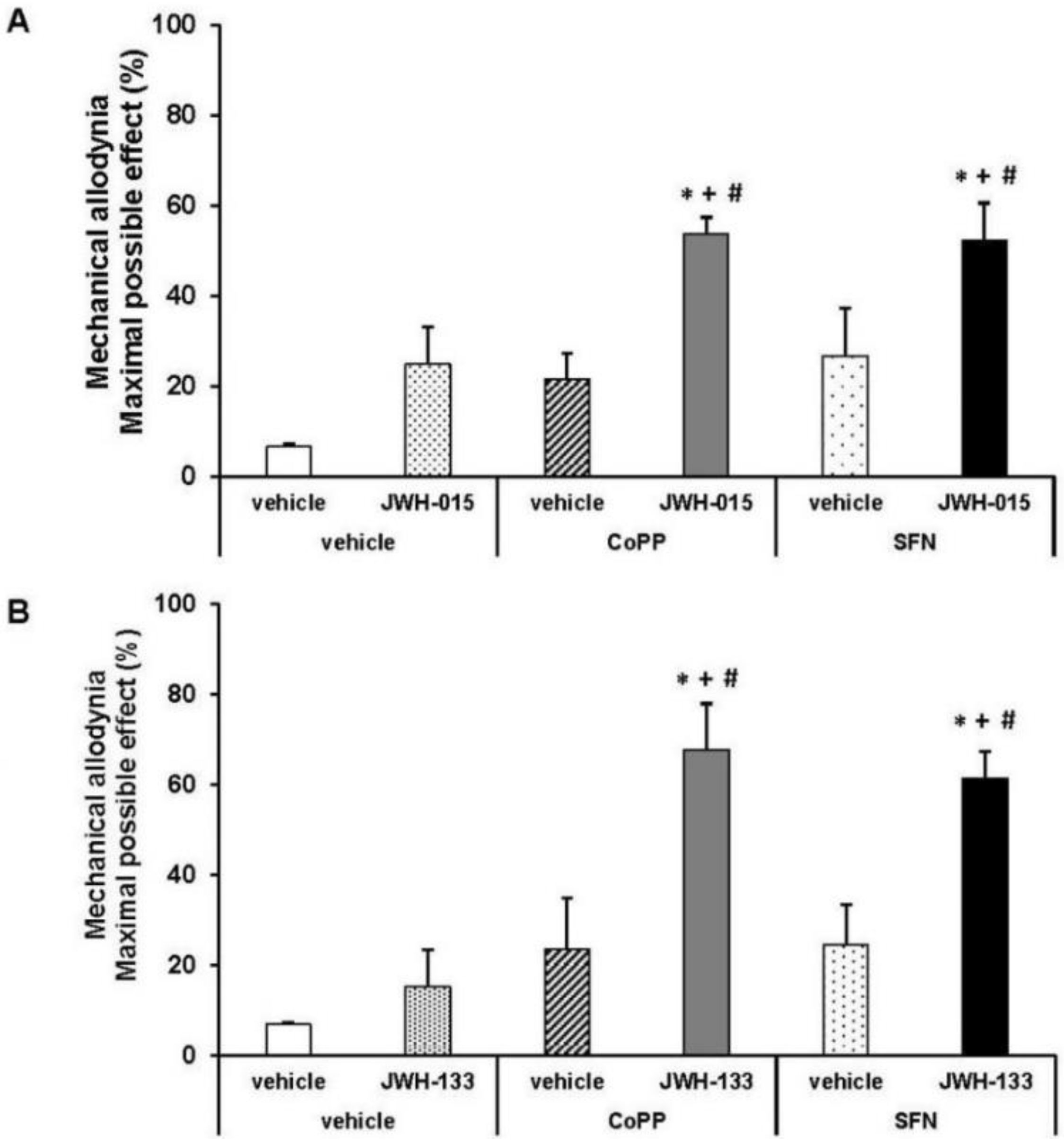 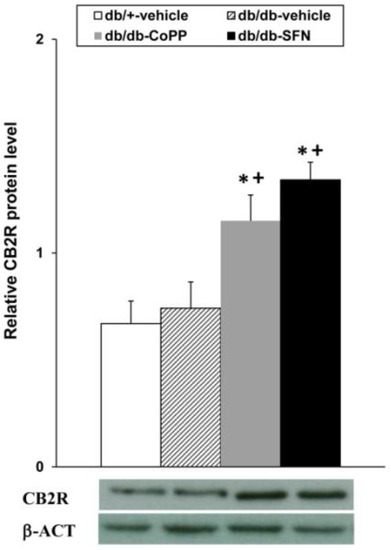