iTRAQ-Based Identification of Proteins Related to Muscle Growth in the Pacific Abalone, Haliotis discus hannai
Next Article in Special Issue

The Relevance of the UPS in Fatty Liver Graft Preservation: A New Approach for IGL-1 and HTK Solutions
Previous Article in Journal

The E3 ubiquitin ligase, von Hippel–Lindau (VHL), regulates protein expression by polyubiquitination. Although the protein VHL (pVHL) was reported to be involved in the heart function, the underlying mechanism is unclear. Here, we show that pVHL was upregulated in hearts from two types of genetically dilated cardiomyopathy (DCM) mice models. In comparison with the wild-type mouse, both DCM mice models showed a significant reduction in the expression of phospholamban (PLN), a potent inhibitor of sarco(endo)plasmic reticulum Ca2+-ATPase, and enhanced interaction between pVHL and PLN. To clarify whether pVHL is involved in PLN degradation in failing hearts, we used carbonylcyanide m-chlorophenylhydrazone (CCCP), a mitochondrial membrane potential (MMP)-lowering reagent, to mimic the heart failure condition in PLN-expressing HEK293 cells and found that CCCP treatment resulted in PLN degradation and increased interaction between PLN and pVHL. However, these effects were reversed with the addition of N-acetyl-l-cysteine. Furthermore, the co-transfection of VHL and PLN in HEK293 cells decreased PLN expression under oxidative stress, whereas knockdown of VHL increased PLN expression both under normal and oxidative stress conditions. Together, we propose that oxidative stress upregulates pVHL expression to induce PLN degradation in failing hearts. View Full-Text
Keywords: cardiac function; phospholamban; calcium signaling; hypoxia; ubiquitination cardiac function; phospholamban; calcium signaling; hypoxia; ubiquitination
►▼ Show Figures 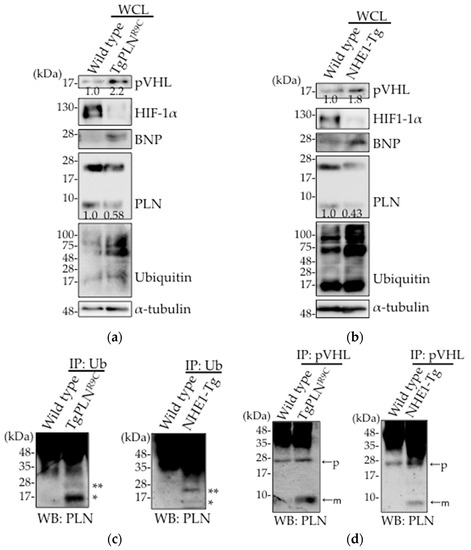