Clubroot disease is a serious threat to canola production in western Canada and many parts of the world. Rcr1 is a clubroot resistance (CR) gene identified recently and its molecular mechanisms in mediating CR have been studied using several omics approaches. The current study aimed to characterize the biochemical changes in the cell wall of canola roots connecting to key molecular mechanisms of this CR gene identified in prior studies using Fourier transform infrared (FTIR) spectroscopy. The expression of nine genes involved in phenylpropanoid metabolism was also studied using qPCR. Between susceptible (S) and resistance (R) samples, the most notable biochemical changes were related to an increased biosynthesis of lignin and phenolics. These results were supported by the transcription data on higher expression of BrPAL1. The up-regulation of PAL is indicative of an inducible defence response conferred by Rcr1; the activation of this basal defence gene via the phenylpropanoid pathway may contribute to clubroot resistance conferred by Rcr1. The data indicate that several cell-wall components, including lignin and pectin, may play a role in defence responses against clubroot. Principal components analysis of FTIR data separated non-inoculated samples from inoculated samples, but not so much between inoculated S and inoculated R samples. It is also shown that FTIR spectroscopy can be a useful tool in studying plant-pathogen interaction at cellular levels. View Full-Text
Keywords: Brassica napus; callose deposition; infrared spectroscopy; phytoalexins; quantitative RT-PCR Brassica napus; callose deposition; infrared spectroscopy; phytoalexins; quantitative RT-PCR
►▼ Show Figures 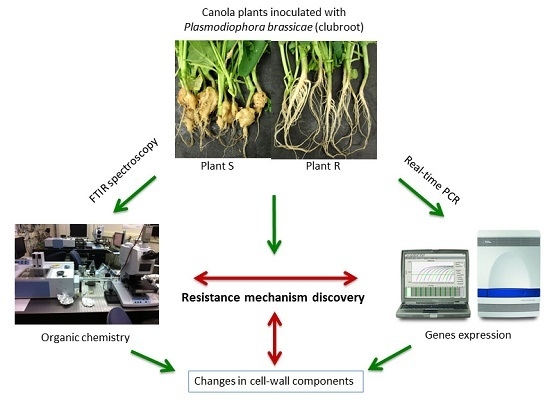