Integrins in the Spotlight of Cancer

miRNAs have emerged as promising markers for tumors. However, the underlying mechanism of specific miRNAs in bladder cancer (BC) remains largely unknown. Here, a comprehensive miRNA/mRNA expression profile was executed by microarray assay for four pairs of bladder carcinoma and para-carcinoma tissues from patients with grade 2 (G2) T2. A total of 99 miRNAs and 4416 mRNAs were discovered to be significantly differentially expressed in BC tissues compared with controls. Five microRNAs and two mRNAs were validated by qRT-PCR in 30 pairs of samples, including G1–G3/T1–T4. Subsequently, we constructed a network with the five miRNAs-target mRNAs; gene ontology (GO) and Kyoto Encyclopedia of Genes and Genomes (KEGG) enrichment analyses were utilized to recognize the functions and associated pathways. Moreover, we further found that miR-130b-3p was significantly up-regulated and negatively correlated with phosphatase and tensin homolog (PTEN) expression in bladder cancer tissues. Next, we demonstrated that miR-130b-3p might target PTEN through bioinformatics and dual-luciferase reporter assay. Finally, we showed that miR-130b-3p could down-regulate PTEN expression, which promoted proliferation, migration, invasion and rearranged cytoskeleton through the activation of the PI3K and integrin β1 signaling pathway in bladder cancer cells. Inversely, miR-130b-3p inhibitors induced apoptosis. Taken together, this research investigated, for the first time, miR-130b-3p by an incorporated analysis of microRNA/mRNA expressions of a genome-wide screen in BC. Our findings suggest that the miR-130b-3p/PTEN/integrin β1 axis could play a critical role in the progression and development of BC and that miR-130b-3p might be a valuable clinical marker and therapeutical target for BC patients. View Full-Text
Keywords: miRNA; integrin β1; miR-130b; PTEN; invasion; bladder cancer miRNA; integrin β1; miR-130b; PTEN; invasion; bladder cancer
►▼ Show Figures 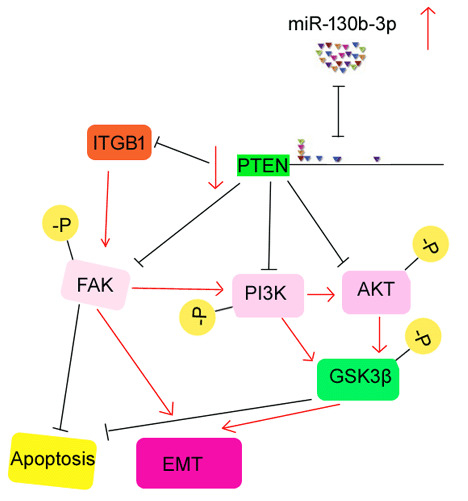