Neuroprotection via Reduction in Stress: Altered Menstrual Patterns as a Marker for Stress and Implications for Long-Term Neurologic Health in Women

Hypoxia inducible factor 1α (HIF-1α), a pivotal regulator of gene expression in response to hypoxia and ischemia, is now considered to regulate both pro-survival and pro-death responses depending on the duration and severity of the stress. We previously showed that chronic global cerebral hypoperfusion (CCH) triggered long-lasting accumulation of HIF-1α protein in the hippocampus of rats. However, the role of the stabilized HIF-1α in CCH is obscure. Here, we knock down endogenous HIF-1α to determine whether and how HIF-1α affects the disease processes and phenotypes of CCH. Lentivirus expressing HIF-1α small hairpin RNA was injected into the bilateral hippocampus and bilateral ventricles to knock down HIF-1α gene expression in the hippocampus and other brain areas. Permanent bilateral common carotid artery occlusions, known as 2-vessel occlusions (2VOs), were used to induce CCH in rats. Angiogenesis, oxidative stress, histopathological changes of the brain, and cognitive function were tested. Knockdown of HIF-1α prior to 2VO significantly exacerbates the impairment of learning and memory after four weeks of CCH. Mechanically, reduced cerebral angiogenesis, increased oxidative damage, and increased density of astrocytes and microglia in the cortex and some subregions of hippocampus are also shown after four weeks of CCH. Furthermore, HIF-1α knockdown also disrupts upregulation of regulated downstream genes. Our findings suggest that HIF-1α-protects the brain from oxidative stress and inflammation response in the disease process of CCH. Accumulated HIF-1α during CCH mediates endogenous adaptive processes to defend against more severe hypoperfusion injury of the brain, which may provide a therapeutic benefit. View Full-Text
Keywords: chronic cerebral hypoperfusion; hypoxia inducible factor 1α (HIF-1α); neuroprotective; cognition chronic cerebral hypoperfusion; hypoxia inducible factor 1α (HIF-1α); neuroprotective; cognition
►▼ Show Figures 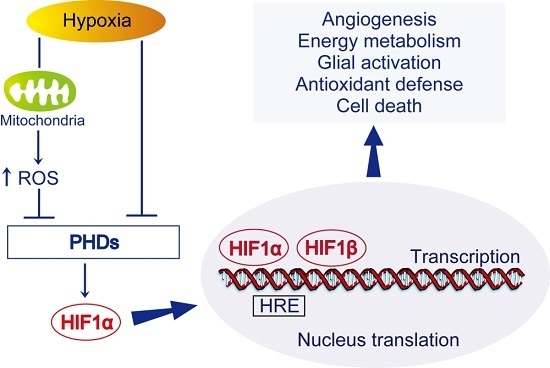