Colorectal cancer (CRC) is the third most common cancer and the fourth most common cause of cancer-related death. Most cases of CRC are detected in Western countries, with its incidence increasing year by year. The probability of suffering from colorectal cancer is about 4%–5% and the risk for developing CRC is associated with personal features or habits such as age, chronic disease history and lifestyle. In this context, the gut microbiota has a relevant role, and dysbiosis situations can induce colonic carcinogenesis through a chronic inflammation mechanism. Some of the bacteria responsible for this multiphase process include Fusobacterium spp, Bacteroides fragilis and enteropathogenic Escherichia coli. CRC is caused by mutations that target oncogenes, tumour suppressor genes and genes related to DNA repair mechanisms. Depending on the origin of the mutation, colorectal carcinomas can be classified as sporadic (70%); inherited (5%) and familial (25%). The pathogenic mechanisms leading to this situation can be included in three types, namely chromosomal instability (CIN), microsatellite instability (MSI) and CpG island methylator phenotype (CIMP). Within these types of CRC, common mutations, chromosomal changes and translocations have been reported to affect important pathways (WNT, MAPK/PI3K, TGF-β, TP53), and mutations; in particular, genes such as c-MYC, KRAS, BRAF, PIK3CA, PTEN, SMAD2 and SMAD4 can be used as predictive markers for patient outcome. In addition to gene mutations, alterations in ncRNAs, such as lncRNA or miRNA, can also contribute to different steps of the carcinogenesis process and have a predictive value when used as biomarkers. In consequence, different panels of genes and mRNA are being developed to improve prognosis and treatment selection. The choice of first-line treatment in CRC follows a multimodal approach based on tumour-related characteristics and usually comprises surgical resection followed by chemotherapy combined with monoclonal antibodies or proteins against vascular endothelial growth factor (VEGF) and epidermal growth receptor (EGFR). Besides traditional chemotherapy, alternative therapies (such as agarose tumour macrobeads, anti-inflammatory drugs, probiotics, and gold-based drugs) are currently being studied to increase treatment effectiveness and reduce side effects. View Full-Text
Keywords: colorectal carcinoma; ncRNA; microbiota; biomarkers; gene-expression profiling; agarose macrobeads; metal-based drugs; anti-inflammatories; probiotics; functional food colorectal carcinoma; ncRNA; microbiota; biomarkers; gene-expression profiling; agarose macrobeads; metal-based drugs; anti-inflammatories; probiotics; functional food
►▼ Show Figures 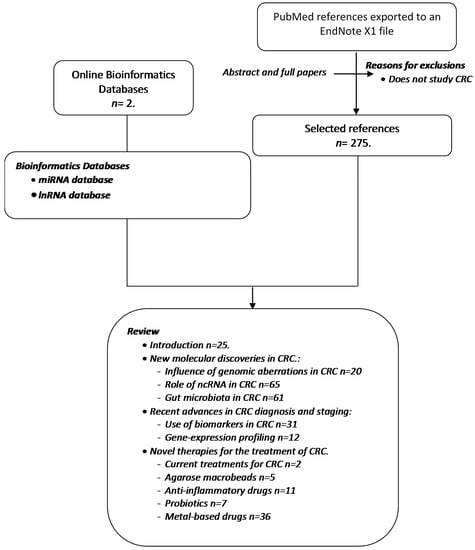