Update on Inflammatory Biomarkers and Treatments in Ischemic Stroke

Hypoxic-ischemic encephalopathy (HIE) resulting from asphyxia in the peripartum period is the most common cause of neonatal brain damage and can result in significant neurologic sequelae, including cerebral palsy. Currently therapeutic hypothermia is the only accepted treatment in addition to supportive care for infants with HIE, however, many additional neuroprotective therapies have been investigated. Of these, glucocorticoids have previously been shown to have neuroprotective effects. HIE is also frequently compounded by infectious inflammatory processes (sepsis) and as such, the infants may be more amenable to treatment with an anti-inflammatory agent. Thus, the present study investigated dexamethasone and hydrocortisone treatment given after hypoxic-ischemic (HI) insult in neonatal rats via intracerebroventricular (ICV) injection and intranasal administration. In addition, we examined the effects of hydrocortisone treatment in HIE after lipopolysaccharide (LPS) sensitization in a model of HIE and sepsis. We found that dexamethasone significantly reduced rat brain infarction size when given after HI treatment via ICV injection; however it did not demonstrate any neuroprotective effects when given intranasally. Hydrocortisone after HI insult also significantly reduced brain infarction size when given via ICV injection; and the intranasal administration showed to be protective of brain injury in male rats at a dose of 300 µg. LPS sensitization did significantly increase the brain infarction size compared to controls, and hydrocortisone treatment after LPS sensitization showed a significant decrease in brain infarction size when given via ICV injection, as well as intranasal administration in both genders at a dose of 300 µg. To conclude, these results show that glucocorticoids have significant neuroprotective effects when given after HI injury and that these effects may be even more pronounced when given in circumstances of additional inflammatory injury, such as neonatal sepsis. View Full-Text
Keywords: hydrocortisone; dexamethasone; lipopolysaccharides; intranasal; neuroprotection; Rice-Vannucci; neonatal; hypoxic-ischemic; encephalopathy hydrocortisone; dexamethasone; lipopolysaccharides; intranasal; neuroprotection; Rice-Vannucci; neonatal; hypoxic-ischemic; encephalopathy
►▼ Show Figures 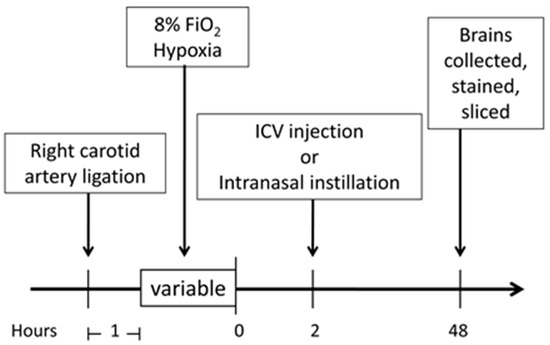