Flavescence dorée (FD) is a threat for wine production in the vineyard landscape of Piemonte, Langhe-Roero and Monferrato, Italy. Spread of the disease is dependent on complex interactions between insect, plant and phytoplasma. In the Piemonte region, wine production is based on local cultivars. The role of six local grapevine varieties as a source of inoculum for the vector Scaphoideus titanus was investigated. FD phytoplasma (FDP) load was compared among red and white varieties with different susceptibility to FD. Laboratory-reared healthy S. titanus nymphs were caged for acquisition on infected plants to measure phytoplasma acquisition efficiency following feeding on different cultivars. FDP load for Arneis was significantly lower than for other varieties. Acquisition efficiency depended on grapevine variety and on FDP load in the source plants, and there was a positive interaction for acquisition between variety and phytoplasma load. S. titanus acquired FDP with high efficiency from the most susceptible varieties, suggesting that disease diffusion correlates more with vector acquisition efficiency than with FDP load in source grapevines. In conclusion, although acquisition efficiency depends on grapevine variety and on FDP load in the plant, even varieties supporting low FDP multiplication can be highly susceptible and good sources for vector infection, while poorly susceptible varieties may host high phytoplasma loads. View Full-Text
Keywords: arneis; brachetto; dolcetto; freisa; moscato; timorasso; susceptibility arneis; brachetto; dolcetto; freisa; moscato; timorasso; susceptibility
►▼ Show Figures 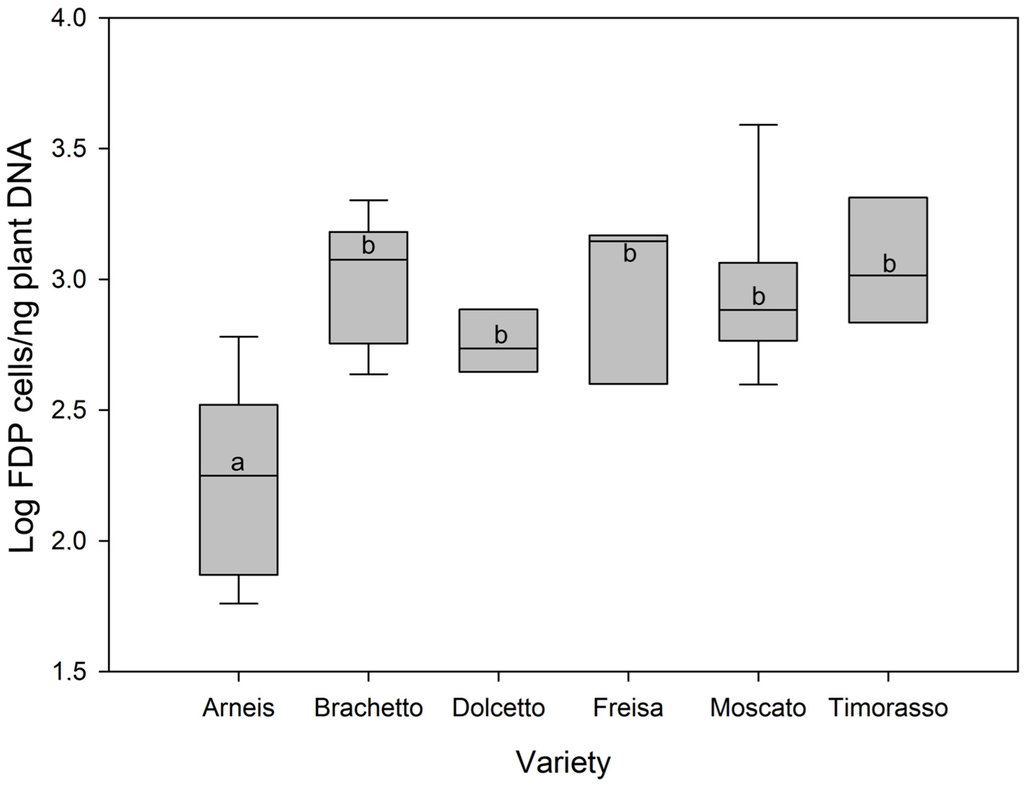