Apoptosis in Porcine Pluripotent Cells: From ICM to iPSCs

In vitro research in the field of type I diabetes is frequently limited by the availability of a functional model for islets of Langerhans. This method shows that by the addition of theophylline to the glucose buffers, mouse insulinoma MIN6 and rat insulinoma INS1E pseudo-islets can serve as a model for islets of Langerhans for in vitro research. The effect of theophylline is dose- and cell line-dependent, resulting in a minimal stimulation index of five followed by a rapid return to baseline insulin secretion by reducing glucose concentrations after a first high glucose stimulation. This protocol solves issues concerning in vitro research for type I diabetes as donors and the availability of primary islets of Langerhans are limited. To avoid the limitations of using human donor material, cell lines represent a valid alternative. Many different β cell lines have been reported, but the lack of reproducible responsiveness to glucose stimulation remains a challenge.
Keywords: cell lines; insulin secretion in vitro; assay methods cell lines; insulin secretion in vitro; assay methods

2.1. The Effect of Theophylline on Insulin Secretion

Figure 1 shows the insulin secretion of MIN6 cells when stimulated with glucose. Cells were either stimulated with standard glucose buffers (1.67 and 16.7 mM) or with glucose buffers with 10 mM theophylline. Theophylline was added either in all buffers (T) or just in the high glucose buffer (T(hg)). Figure 1B shows the differences in stimulation indices between the different groups. Functionality is expressed as the stimulation index and it is defined as the amount of insulin secreted under high glucose stimulation, divided by the basal insulin secreted in low glucose conditions. The control group appeared to be non-functional whereas both theophylline groups exhibited functional insulin secretion profiles. Furthermore, no difference was seen in insulin secretion patterns between the two different theophylline groups. Although the low-high-low profile was visible when using theophylline compared to the control, only a marginal improvement in the stimulation index was seen. As these experiments were performed on monolayers, and the beneficial effect on function of cell aggregation has already been described in literature, further experiments were conducted with pseudo-islets [2,18,19].

2.2. The Effect of Theophylline on the Metabolic Activity of MIN6 and INS1E Cells

The effect on metabolic activity was assessed on both MIN6 (Figure 2A) and INS1E (Figure 2B) pseudo-islets for the duration of a glucose-induced insulin secretion test. Figure 2 shows the fold change of the metabolic activity after 5 h incubation compared to the initial basal activity. Again, no significant effect of theophylline was seen in both cell types and for none of the concentrations tested, confirming that theophylline exerted no toxic effect on MIN6 and INS1E pseudo-islets, for an incubation time of the duration of a standard function test.

For controlled pseudo-islet formation, cells were cultured in sterile agarose microwells. These agarose microwells were fabricated as described previously [26]. Polydimethylsiloxane (PDMS) negative molds containing micro pillars (200 µm) were sterilized (70% ethanol). A 3% agarose (UltraPureTM Gibco Invitrogen, Bleiswijk, The Netherlands) PBS solution was heated to 100 °C in a microwave (ESM117, ETNA, Duiven, The Netherlands). PDMS molds were placed inside six-well plate and filled with 6 mL agarose. Air bubbles were removed by centrifuging (300× g, 1 min). Solidification of the agarose was established at 4 °C (>30 min). Next, the molds were removed from the agarose using a sterile spatula. The agarose chips were punched out leaving a thin agarose wall on all sides to fit into a 12-well plate. Stable pseudo-islets were then created based on the work of Hilderink et al. [20]. MIN6 cells or INS1E cells were seeded onto the agarose chips (250 cells per aggregate). The plates were centrifuged (150× g, 1 min) and 1 mL of medium was carefully added to the chips. After 48 h at 37 °C pseudo-islets were flushed out of the chips.

A tailor-made Krebs buffer (115 mM NaCl, 5 mM KCl, 24 mM NaHCO3, Sigma, Diegem, Belgium) supplemented with 2.2 mM CaCl2, 20 mM HEPES (Gibco), 2 mg/mL bovine serum albumin, and 1 mM MgCl2 was prepared at pH 7.4 with different concentrations of theophylline (Sigma) (concentration range from 0.1 to 20 mM). Subsequently, the buffer was split into low (1.67 mM) and high glucose (16.7 mM). Cells were washed three times in low glucose buffer followed by a pre-incubation of 90 min in low glucose buffer. Cells were stimulated for 45 min in subsequent low, high and low glucose buffer with a three time wash step in low glucose between the high and second low. Samples were taken after each incubation, spun down (300× g, 3 min) and the supernatant was stored at −20 °C. Samples were analyzed using a rat insulin Elisa (Mercodia, Uppsala, Sweden) for INS1E samples and mouse insulin ELISA (Mercodia) for MIN6 samples.

4.4. The Effect of Theophylline on Insulin Secretion

MIN6 cells were seeded in a 12-well plate at a cell density of 30,000 cell/cm2. After 48 h insulin secretion upon glucose stimulation with the addition of theophylline (10 mM) in both low (1.67 mM) and high glucose (16.7 mM) Krebs buffers or only the high glucose (16.7 mM) Krebs buffer was tested. Insulin secretion was quantified by ELISA as described above.

4.5. The Effect of Theophylline on the Metabolic Activity of MIN6 and INS1E Cells

MIN6 and INS1E pseudo-islets were prepared as described above. Per condition approximately 950 pseudo-islets were seeded in a 96-transwell plate (40 μm, Millipore, Darmstadt, Germany). A Presto blue assay (Invitrogen) was performed following manufacturer’s protocol (1.5 h incubation) to determine their basal level of metabolic activity, before theophylline treatment. After the first presto blue, the pseudo-islets were washed three times in low glucose buffer with different theophylline concentrations (0, 5, 10, and 20 mM) and incubated for 5 h in the same low glucose buffer with added theophylline. After these 5 h of incubation, a second presto blue assay was performed (1.5 h incubation).

MIN6 and INS1E pseudo-islets were prepared as described above. Per condition approximately 285 pseudo-islets were seeded in a 96-transwell plate (40 μm, Millipore). Six theophylline concentrations were tested (0, 0.1, 0.5, 1, 5, and 10 mM) by dissolving the theophylline in both low (1.67 mM) and high (16.7 mM) glucose Krebs buffers. Insulin secretion upon glucose stimulation was tested as described above.

This research was supported by Juvenile Diabetes Research Institute Foundation (Grant 17-2013-303), the Dutch Diabetes Cell Therapy Initiative (DCTI), the Dutch Research fond, and the Ministry of Economical Affairs (FES program) of the Netherlands. 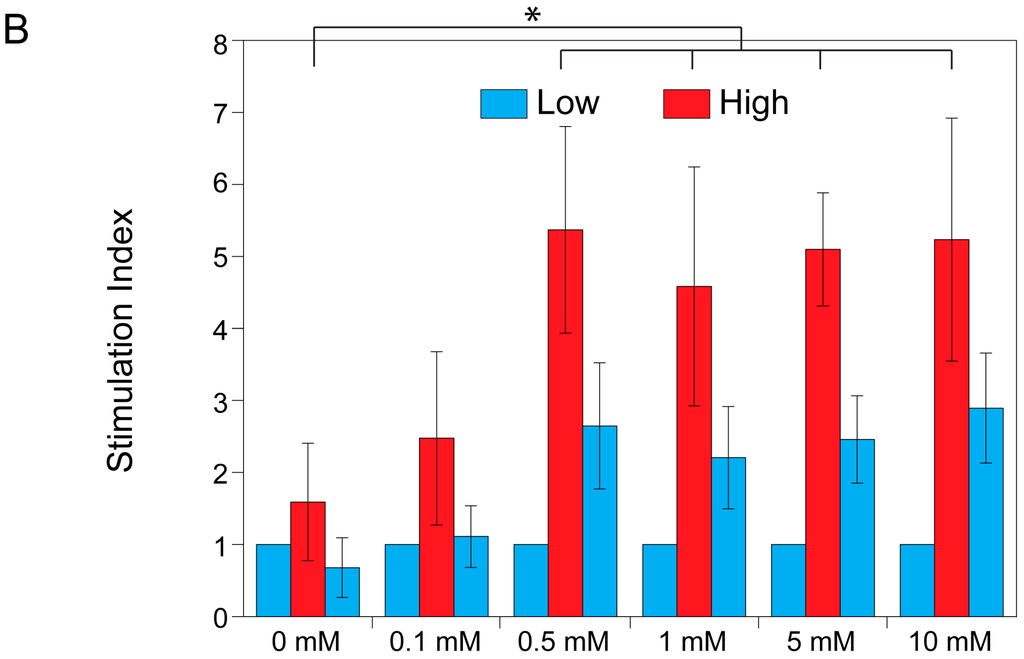