Fruit Antioxidants during Vinegar Processing: Changes in Content and in Vitro Bio-Accessibility
Previous Article in Journal

The aim of this study was to determine the effect of oral hormone therapy (HT) on oxidative stress (OS) in postmenopausal women with metabolic syndrome (MetS). A randomized, double blind, placebo-controlled trial was carried out. We formed four groups of 25 women each; healthy (HW) and MetS women (MSW) were assigned to HT (1 mg/day of estradiol valerate plus 5 mg/10 day of medroxiprogesterone) or placebo. We measured plasma lipoperoxides, erythrocyte superoxide dismutase and glutathione peroxidase, total plasma antioxidant status and uric acid, as OS markers. Alternative cut-off values of each parameter were defined and a stress score (SS) ranging from 0 to 7 was used as total OS. MetS was defined according to National Cholesterol Education Program Adult Treatment Panel III (NCEP-ATPIII) criteria. Participants were seen at baseline, 3 and 6 months. After 6 months, MetS decreased in MSW-HT (48%), their triglycerides and high-density lipoprotein cholesterol (HDL-c) improved; in the other groups no difference was found. SS in MSW-HT decreased (3.8 ± 0.3 to 1.7 ± 0.3, p < 0.05) and OS was also reduced (44%), this effect was evident since 3 mo. HW-HT with high OS also decreased (40%). In placebo groups there was no change. Our findings suggest that HT improve lipids and OS associated to MetS in postmenopausal women. View Full-Text
Keywords: oxidative stress; hormone therapy; postmenopause; metabolic syndrome; lipids profile oxidative stress; hormone therapy; postmenopause; metabolic syndrome; lipids profile
►▼ Show Figures 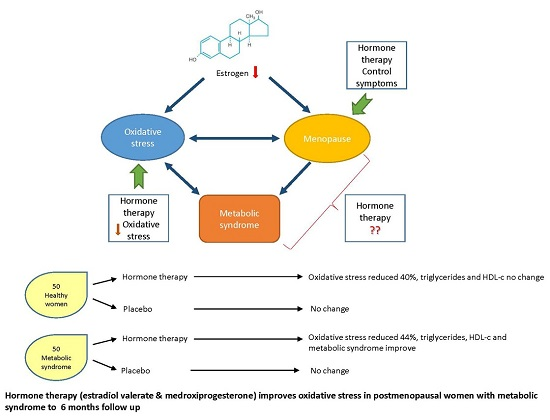