Thirteen mammalian aquaporin (AQP) water channels are known, and few of them play a role in the mammalian reproductive system. In our earlier study, the predominance of AQP5 in the late-pregnant rat uterus was proven. Our current aim was to investigate the effect of estrogen- and gestagen-related compounds on the expression of the AQP5 channel in the late-pregnant rat uterus. Furthermore, we examined the effect of hormonally-induced preterm delivery on the expression of AQP5 in the uterus. We treated pregnant Sprague-Dawley rats subcutaneously with 17β-estradiol, clomiphene citrate, tamoxifen citrate, progesterone, levonorgestrel, and medroxyprogesterone acetate. Preterm delivery was induced by subcutaneous mifepristone and intravaginal prostaglandin E2. Reverse-transcriptase PCR and Western blot techniques were used for the detection of the changes in AQP5 mRNA and protein expressions. The amount of AQP5 significantly increased after progesterone and progesterone analogs treatment on 18 and 22 days of pregnancy. The 17β-estradiol and estrogen receptor agonists did not influence the AQP5 mRNA level; however, estradiol induced a significant increase in the AQP5 protein level on the investigated days of gestation. Tamoxifen increased the AQP5 protein expression on day 18, while clomiphene citrate was ineffective. The hormonally-induced preterm birth significantly decreased the AQP5 level similarly to the day of delivery. We proved that AQP5 expression is influenced by both estrogen and progesterone in the late-pregnant rat uterus. The influence of progesterone on AQP5 expression is more predominant as compared with estrogen. View Full-Text
Keywords: aquaporin 5; pregnancy; estrogen; gestagen aquaporin 5; pregnancy; estrogen; gestagen
►▼ Show Figures 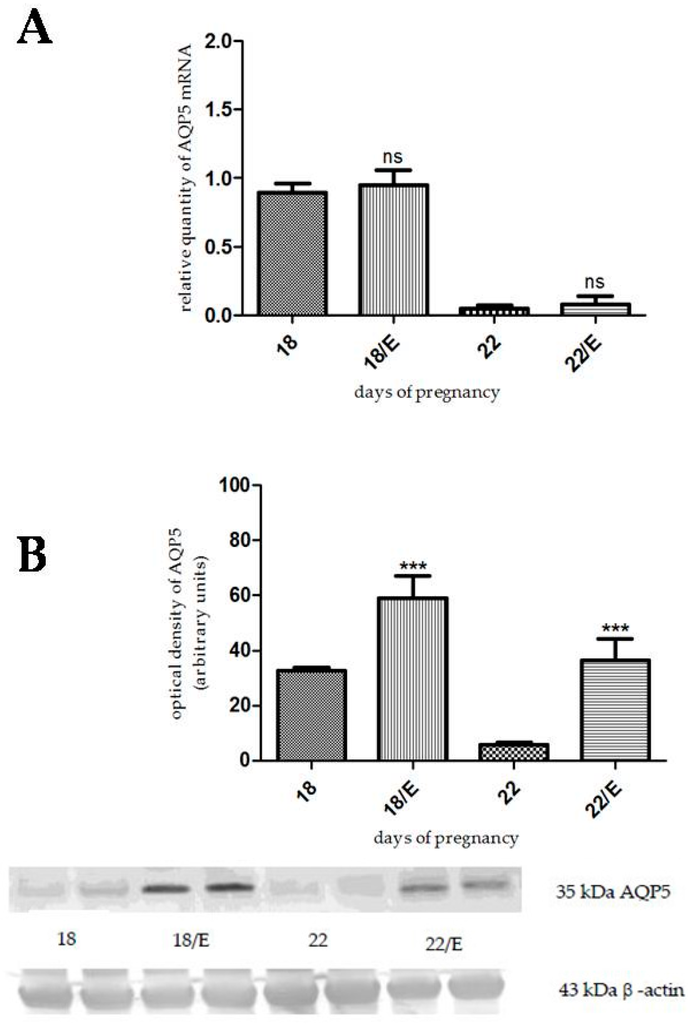