The Glutathione Derivative, GSH Monoethyl Ester, May Effectively Whiten Skin but GSH Does Not

Glutathione in its reduced form (GSH) is an antioxidant and also is involved in pheomelanin formation. Thus, it has been long believed that GSH has a skin whitening effect. However, its actual or direct effect is unproven. We evaluated the anti-melanogenic effects of GSH and its derivatives in vitro. We examined change of melanogenesis and its related proteins by GSH itself and its derivatives, including GSH monoethyl ester (GSH-MEE), GSH diethyl ester (GSH-DEE) and GSH monoisopropyl ester (GSH-MIPE) in Melan-A cells, Mel-Ab cells, and B16F10 cells. GSH and GSH-MEE did not display cytotoxic activity, but GSH-MIPE and GSH-DEE did. Intriguingly, GSH itself had no inhibitory effect on melanin production or intracellular tyrosinase activity. Rather, it was GSH-MEE and GSH-MIPE that profoundly reduced the amount of melanin and intracellular tyrosinase activity. Thus, GSH-MEE was selected as a suitable candidate skin-whitening agent and it did not alter melanogenesis-associated proteins such as microphthalmia-associated transcription factor (MITF), tyrosinase, tyrosinase-related protein (TRP)-1, and TRP-2, but it did increase the amount of suggested pheomelanin and suggested pheomelanin/eumelanin ratio. GSH-MEE was effective for anti-melanogenesis, whereas GSH itself was not. GSH-MEE could be developed as a safe and efficient agent for the treatment of hyperpigmentation skin disorders. View Full-Text
Keywords: glutathione derivatives; glutathione monoethyl ester; melanogenesis; pheomelanin glutathione derivatives; glutathione monoethyl ester; melanogenesis; pheomelanin
►▼ Show Figures 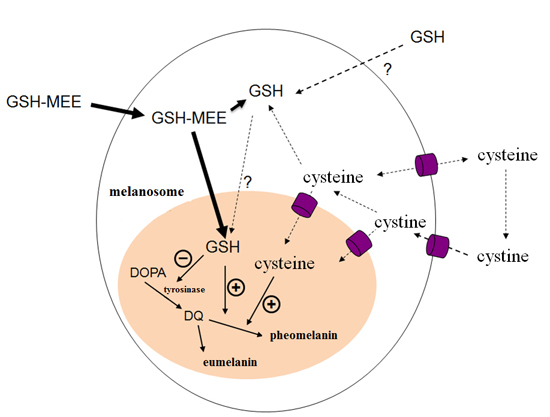