Herbal Medicine in Mexico: A Cause of Hepatotoxicity. A Critical Review
Previous Article in Special Issue

Non-small cell lung cancer (NSCLC) represents about 85% of the reported cases of lung cancer. Acquired resistance to targeted therapy with epidermal growth factor receptor-tyrosine kinase inhibitors (EGFR-TKIs), such as gefitinib, is not uncommon. It is thus vital to explore novel strategies to restore sensitivity to gefitinib. Provided that microRNAs (miRNAs) negatively regulate their gene targets at the transcriptional level, it is speculated that miRNA mimetics may reduce the expression, activity and signal transduction of EGFR so that sensitization of tumour sites to gefitinib-induced cytotoxicity can be achieved. Indeed, a growing body of evidence has shown that the manipulation of endogenous levels of miRNA not only attenuates the EGFR/PI3K/Akt phosphorylation cascade, but also restores apoptotic cell death in in vitro models of experimentally-induced gefitinib resistance and provoked tumour regression/shrinkage in xenograft models. These data are in concordant with the clinical data showing that the differential expression profiles of miRNA in tumour tissues and blood associate strongly with drug response and overall survival. Furthermore, another line of studies indicate that the chemopreventive effects of a variety of natural compounds may involve miRNAs. The present review aims to discuss the therapeutic capacity of miRNAs in relation to recent discoveries on EGFR-TKI resistance, including chronic drug exposure and mutations. View Full-Text
Keywords: EGFR; gefitinib; miRNA; non-small cell lung cancer; resistance EGFR; gefitinib; miRNA; non-small cell lung cancer; resistance
►▼ Show Figures 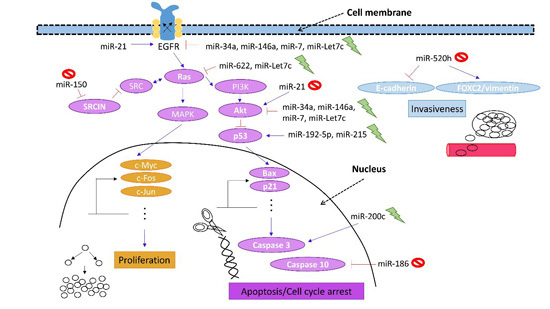