Chemical Conditioning as an Approach to Ischemic Stroke Tolerance: Mitochondria as the Target
Previous Article in Journal

The pathogenesis of Parkinson’s disease (PD) often involves the over-activation of microglia. Over-activated microglia could produce several inflammatory mediators, which trigger excessive inflammation and ultimately cause dopaminergic neuron damage. Anti-inflammatory effects of glucagon-like peptide-2 (GLP-2) in the periphery have been shown. Nonetheless, it has not been illustrated in the brain. Thus, in this study, we aimed to understand the role of GLP-2 in microglia activation and to elucidate the underlying mechanisms. BV-2 cells were pretreated with GLP-2 and then stimulated by lipopolysaccharide (LPS). Cells were assessed for the responses of pro-inflammatory enzymes (iNOS and COX-2) and pro-inflammatory cytokines (IL-1β, IL-6 and TNF-α); the related signaling pathways were evaluated by Western blotting. The rescue effect of GLP-2 on microglia-mediated neurotoxicity was also examined. The results showed that GLP-2 significantly reduced LPS-induced production of inducible nitric oxide synthase (iNOS), cyclooxygenase-s (COX-2), IL-1β, IL-6 and TNF-α. Blocking of Gαs by NF449 resulted in a loss of this anti-inflammatory effect in BV-2 cells. Analyses in signaling pathways demonstrated that GLP-2 reduced LPS-induced phosphorylation of ERK1/2, JNK1/2 and p65, while no effect was observed on p38 phosphorylation. In addition, GLP-2 could suppress microglia-mediated neurotoxicity. All results imply that GLP-2 inhibits LPS-induced microglia activation by collectively regulating ERK1/2, JNK1/2 and p65. View Full-Text
Keywords: glucagon-like peptide-2; microglia; Parkinson’s disease; MAPK; NF-κB glucagon-like peptide-2; microglia; Parkinson’s disease; MAPK; NF-κB
►▼ Show Figures 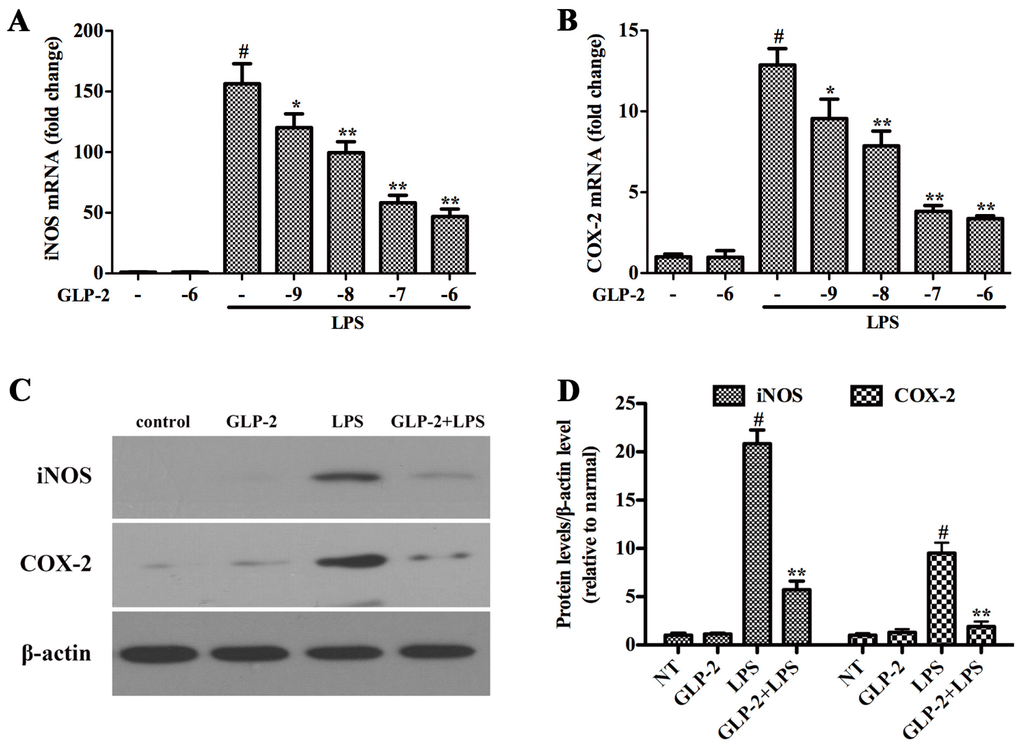