Recently the tryptophan pathway has been considered an important determinant of HIV-1 infected patients’ quality of life, due to the toxic effects of its metabolites on the central nervous system (CNS). Since the dysbiosis described in HIV-1 patients might be responsible for the microbial translocation, the chronic immune activation, and the altered utilization of tryptophan observed in these individuals, we speculated a correlation between high levels of immune activation markers in the cerebrospinal fluid (CSF) of HIV-1 infected patients and the over-expression of indolamine-2,3-dioxygenase (IDO) at the gut mucosal surface. In order to evaluate this issue, we measured the levels of neopterin in CSF, and the expression of IDO mRNA in gut-associated lymphoid tissue (GALT), in HIV-1-infected patients on effective combined antiretroviral therapy (cART), at baseline and after six months of probiotic dietary management. We found a significant reduction of neopterin and IDO mRNA levels after the supplementation with probiotic. Since the results for the use of adjunctive therapies to reduce the levels of immune activation markers in CSF have been disappointing so far, our pilot study showing the efficacy of this specific probiotic product should be followed by a larger confirmatory trial.
Keywords: HIV-1; IDO; neopterin; tryptophan; HAND; CNS HIV-1; IDO; neopterin; tryptophan; HAND; CNS

A key role of tryptophan metabolism in causing the chronic immune activation status in patients with HIV-1 infection has been proposed [1,2]. Altogether, these aspects are relevant in the context of the contribution of the microbiota composition in modulating the gut–brain axis (GBA) [3]. The discovery that differential gut microbial composition is associated with alterations in behavior and neurocognitive functions has significantly contributed to establish the “microbiota–gut–brain-axis” as an extension of the well-accepted GBA concept [4]. The latter is generally used to describe the existence of a bidirectional communication network between the CNS and intestinal organs, including the enteric nervous system (ENS) [3]. Here, we speculate that the presence of a dysfunction in tryptophan metabolism during HIV-1 infection may contribute to a disruption of the integrity of the intestinal mucosal barrier, worsen microbial translocation, and, indirectly, immune activation status. In particular, the gut associated lymphoid tissue (GALT) is considered to be one of the preferential sites of HIV-1 replication, and members of the class Clostridia have been found to induce mucosal expression of indolamine-2,3-dioxygenase (IDO) [5]. Directly related to this, HIV-1 infected patients are likely to harbor enteropathogenic bacteria that can catabolize tryptophan into immunomodulatory kynourenine derivatives, known to correlate with disease progression and mucosal immune disruption [6]. Indeed, it has been recently reported that HIV-1 infection leads to a significant and distinct impact on the metabolism of the gut ecosystem compared with other diseases [7]. In the course of HIV-1 infection, the chronic immune activation—partially due to a dysfunction of the GALT—with consequent microbial translocation has been linked with an increased production of interferon (IFN) gamma and IDO activity [8,9]. IDO is an enzyme involved in tryptophan metabolism, and its expression is increased by many cytokines. This enzyme can induce an increase in kinurenine and other metabolites, such as quinolinic acid. Those molecules have been reported to be associated with the neuronal toxicity and neurocognitive disorders in HIV-1 infected patients [9,10,11,12,13]. Moreover, kynurenine can act as negative regulators of T cell proliferation [14], while quinolinic acid is related to the onset of neurocognitive disorders, such as the AIDS dementia complex [2]. Notably, IDO has been also associated with a reduction in Th17 cell frequency, which plays a pivotal role in the maintenance of gut mucosal integrity during HIV-1 infection [15,16]. Given the strong relationship between the damage of the intestinal epithelium and the presence of altered gut microbiota composition in HIV-1 population, and the hypothetical link with the mucosal expression of IDO, the administration of oral probiotics in combination with combined antiretroviral therapy (cART) could limit the outgrowth of pathobionts that exacerbate mucosal immune disequilibrium in IDO expression. Neopterin—produced by macrophages upon IFN gamma stimulation—is a recognized marker of monocyte activation, and an association between its expression and the development of HIV-associated neurocognitive disorders (HAND) has been proposed [17,18,19,20]. The expression of neopterin has been found to be higher both in naïve HIV-1-positive patients compared to those on cART and in HIV-1 infected patients on effective cART than in healthy people [20,21]. In light of the above considerations, we performed the first longitudinal pilot study evaluating the effects of a high concentration multistrain probiotic product on neopterin levels in cerebrospinal fluid (CSF) and on the expression of IDO mRNA measured in lymphocytes of lamina propria (LPLs) of the gut in cART-treated HIV-1-positive patients with long-term virologic suppression.

All study participants were HIV-1-positive Caucasian men with a median age of 42 years (IQR 22–53 years). They initiated therapy during chronic HIV-1 infection and had been on cART for a median of six years (IQR, 1.75 to 16.25 years). The median of CD4+ T cell count pre-therapy was 255 cells/mm3 (IQR, 42.75–406.75 cells/mm3), HIV-1 RNA copies median value was 5.0 Log/mL (IQR, 4.81–5.61 Log/mL). All subjects had been virologically suppressed (<37 HIV-1 RNA copies/mL) for at least one year, and their median CD4+ T cell count was 674 (IQR, 564–824 cells/mm3) and 683 (IQR, 610–818 cells/mm3) cells/mm3, respectively, before and after probiotic supplementation of cART. HIV-1 RNA and a search for neurotropic viruses were negative in all CSF samples.
To better understand the improvement in neurocognitive functions in HIV-1-positive patients after probiotic supplementation, we evaluated changes in IDO mRNA and neopterin levels, before (T0), and after six months (T6) of supplementation with probiotics.

We evaluated the expression level of IDO mRNA (which is involved in tryptophan metabolism) in GALT, measuring its amount in LPL. We found that patients with HIV-1 infection had highly variable levels of IDO mRNA before and after probiotic supplementation (coefficient of variability >100%). Following probiotic supplementation, a significantly reduction in the IDO mRNA expression was recorded (p = 0.04, Figure 1).

In order to evaluate the rate of inflammation in the central nervous system (CNS), we measured neopterin levels in the CSF of HIV-1-positive patients, before (T0) and after (T6) probiotic supplementation. We found higher levels of neopterin at T0 compared to those recorded at T6. In particular, a significant decrease of neopterin levels after 6 months of probiotic supplementation was observed (p = 0.004, Figure 2).
Moreover, we investigated the relationship between IDO mRNA expression in the GALT and the level of neopterin in the CSF. We found that at T0 there is a positive correlation between IDO mRNA expression and neopterin level, while at T6, the correlation is no longer observed (Table 1).

Ten HIV-1-positive patients successfully treated with cART were recruited at the Division of Infectious Diseases, Department of Public Health and Infectious Diseases, Hospital of “Sapienza” University of Rome (Italy).
The study was approved by the institutional review board (Department of Public Health and Infectious Diseases, “Sapienza” University of Rome and the Ethics Committee of Umberto I General Hospital, Rome, 2013). All study participants signed written informed consent. The inclusion criteria used to enroll HIV-positive patients were the following: (i) individuals signed the informed consent; (ii) women or men at least 18 years of age; (iii) in highly-active ART (HAART) with HIV RNA <37 copies/mL and CD4 T cell counts >400 cells/mm3. Exclusion criteria were the following: (i) patients with known allergy or intolerance to probiotics; (ii) diarrhea; (iii) history of or current inflammatory diseases of the small intestine or drug addiction; (iv) use of antibiotics or probiotics during the 3 weeks prior the enrollment; (v) pregnancy. All HIV-1-positive patients received a high-concentration lyophilized multistrain probiotic powder supplement twice a day for six months. The probiotic preparation daily dosage was 1.8 × 1012 live bacteria, according to the previously reported studies [45,46]. The product containing the same strains present in the preparation employed in our study (Lactobacillus plantarum DSM 24730, Streptococcus thermophilus DSM 24731, Bifidobacterium breve DSM 24732, Lactobacillus paracasei DSM 24733, Lactobacillus delbrueckii subsp. bulgaricus DSM 24734, Lactobacillus acidophilus DSM 24735, Bifidobacterium longum DSM 24736, Bifidobacterium infantis DSM 24737) currently sold under the brand Vivomixx® in Continental Europe and Visbiome® in USA and Canada.

Patients were sampled for peripheral blood and colonoscopy before and after probiotic supplementation. Colonic washing was carried out by polyethylene glycol-electrolyte solution (PEG) administration 24 h before the examination. The endoscopic procedure was performed with conscious sedation (midazolam 5 mg/iv) using large cup forceps (Radial Jaw 4, Boston Scientific, Natick, MA, USA). All HIV-1-positive patients underwent a total colonoscopy and retrograde ileoscopy for at least 10 cm of distal ileum with conventional or slim scope (model CF or PCF-160 AI, Olympus Medical Europe GmbH, Hamburg, Germany). We obtained specimens (two biopsies from each site) from the terminal ileum, cecum, ascending, transverse, and descending colon.
Lamina propria lymphocytes (LPLs) was stored as dried pellets for RNA extraction. Gut biopsies from each intestine site were pooled and processed. Briefly, biopsies collected in RPMI 1640 were washed twice with EDTA wash media, resuspended, and incubated for 1 h at room temperature in EDTA solution 5 mM. Supernatant containing intraepithelial lymphocytes was removed, and biopsies were digested by 1 h incubation at 37 °C with 1 mg/mL collagenase (Sigma-Aldrich, Milan, Italy) and 1.5 U DNAse I (Sigma-Aldrich), allowing the isolation of LPLs that were filtered through a 70 µm cell strainer.
CSF was collected by lumbar puncture, centrifuged, and cell-free supernatant samples were stored in aliquots at −80 °C.

Quantitative real-time PCR for IDO mRNA expression was carried out with the LightCycler 480 instrument (Roche, Basel, Switzerland). Briefly, total RNA was extracted from LPLs using the RNeasy Plus Universal Tissue Mini Kit (Invitrogen, Carlsbad, CA, USA) and reverse transcribed using the High-Capacity cDNA Reverse Transcription Kit (Applied Biosystem, Foster City, CA, USA), according to the manufacturer’s protocol. Primers and probes for each gene were added to the Probes Master Mix (Roche, Basel, Switzerland) at 500 and 250 nM, respectively, in a final volume of 20 µL. The housekeeping gene β-glucuronidase was used as an internal control. Gene expression values were calculated by the comparative Ct method. The primers and probe sequences used for IDO were the following (Forward 5′-GCATTTTTCAGTGTTCTTCGCA-3′, Reverse 5′-CATACACCAGACCGTCTGATAGCT-3′, Probe5′-(6FAM) ATATTTGTCTGGCTGGAAAGGCAACCCC (TAM)-3′) [47].

In conclusion, the probiotic product employed in our study, when supplemented for 6 months in HIV-1-positive patients, is associated with a significant reduction of the CSF neopterin and GALT-associated IDO mRNA levels. Since the results for the use of adjunctive therapies to reduce the levels of immune activation markers in CSF have been disappointing so far, our pilot study showing the efficacy of this specific probiotic product should be followed by a larger confirmatory trial.

We thank Claudio De Simone inventor of the probiotic product employed for providing technical assistance for this study and all the patients who agreed to participate. This work was supported in part by grants to Carolina Scagnolari from Istituto Pasteur, Fondazione Cenci Bolognetti (Finanziamento dei Programmi di Ricerca 2013–2015, Prot. 55/2013) and Sapienza University of Rome (Ricerche Universitarie, anno 2015, C26A15WTF4). 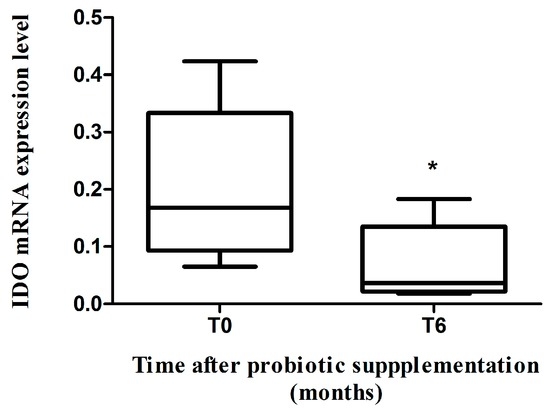