Atopic dermatitis (AD) is a common chronic skin immune disorder that triggers continuous itching [1]. Over the last decade, the prevalence of AD has increased by over 20% in children, attributable to changes in lifestyles and the surrounding environment. Approximately 60% of AD patients will display symptoms before the age of six [2,3]. AD is commonly considered as the first step of the “atopic march”, a typical progression of allergic diseases which frequently first occurs during childhood [4]. A recent cohort study revealed that AD patients had nearly a three-fold increased risk of developing rhinitis and asthma [5].
AD can be caused by genetic mutations, skin barrier damage, and imbalances of innate immune cell activity, such as those elicited by Th1 and Th2 cells [6]. During the development of AD, the skin structure collapses due to continuous itching and inflammation, leading to elevated transepidermal water loss (TEWL). TARC (thymus- and activation-regulated chemokine, CCL17) and MDC (macrophage-derived chemokine, CCL22) are two Th2 cell-producing chemokines that are involved in the pathogenesis of AD and their expression levels are known to be significantly higher in AD patients when compared to normal subjects [7]. House dust mites promote the activation and maturation of dendritic cells that go on to induce Th2-cell differentiation and upregulate TARC and MDC levels [8,9]. These chemokines recruit Th2 lymphocytes to inflammatory sites and aggravate allergic reactions. IL-4, a Th2 cell-induced cytokine, induces AD pathogenesis together with Th2-type responses [10]. Other Th1 cell-derived cytokines such as IFN-γ induce apoptosis in keratinocytes, leading to the development of AD skin lesions [11]. Hyperplasia and dense infiltration of eosinophils and mast cells are also detected in the skin layers of mouse model with AD [12,13]. Despite the numerous mechanistic and clinical studies that have been conducted, the effective treatment and management of AD remains challenging. In addition, the adverse effects of current treatments such as telangiectasia on the cheeks, bacterial infection, acne, and hypertrichosis are often evident and these effects can result in some degree of steroid phobia for many patients [14]. It is also known that corticosteroid addiction syndrome can cause both local and systemic side effects [15]. Therefore, the prevention and treatment of AD using natural, safe, and effective natural compounds is desirable.
Chlorella is a genus of single-celled green algae which contains amino acids, protein, vitamins, dietary fiber, and a variety of antioxidants, bioactive materials, and chlorophylls [16]. It is considered a potential food source due to its high protein content and other nutritional components. Particularly in East Asian countries such as Japan, Taiwan, and Korea, chlorella is commonly consumed with rice, tea, and pancakes [17]. Through various studies, chlorella has been reported to exhibit antitumor, anti-obesity, and hypoglycemic effects in diabetic mice [18,19,20]. Interestingly, one species of chlorella, Chlorella vulgaris (CV), contains high concentrations of protein (51%–58% of dry matter) as well as a host of other biological and disease-preventive functions [21]. CV consumption may also have protective effects in cases of acute hepatic damage and may induce antioxidant activities [22]. In terms of immune-modulating effects, CV supplementation inhibits the production of immunoglobulin E (IgE) and enhances the Th1 cell-related immune response [23]. In addition, it has been reported that oral administration of CV elicits inhibitory effects by suppressing histamine secretion in clinical studies [24]. However, a definitive correlation between CV consumption and allergic diseases such as atopic dermatitis remains unclear. We sought to investigate whether a chlorella-enriched diet may have suppressive effects on the development of AD-like skin symptoms.

To investigate the effect of CV intake on DFE-induced AD symptoms, images of dorsal skin were used to evaluate dermatitis scores and measure epidermal thicknesses. In the final week, AD-like symptoms such as erythema, edema, excursion, and dryness were observed. However, animals supplemented with CV or topical application of tacrolimus exhibited dramatic reductions in AD-like skin lesions (Figure 1A). Supplementation of 3% or 5% CV (5.00 ± 0.68 and 3.67 ± 0.71) significantly lowered dermatitis scores in comparison to the standard diet (6.50 ± 0.62) (Figure 1B). Dorsal skin thicknesses of NC/Nga mice were also increased in the DFE-induced groups (134.35 ± 7.12) and thickness was slightly decreased with 3% and 5% CV supplementation (111.42 ± 5.46 and 95.83 ± 9.41) (Figure 1C). The skin samples were prepared and stained with hematoxylin and eosin (H&E) and are shown in Figure 1D. AD symptom severity was observed to be decreased in the CV-supplemented group and the tacrolimus control group. 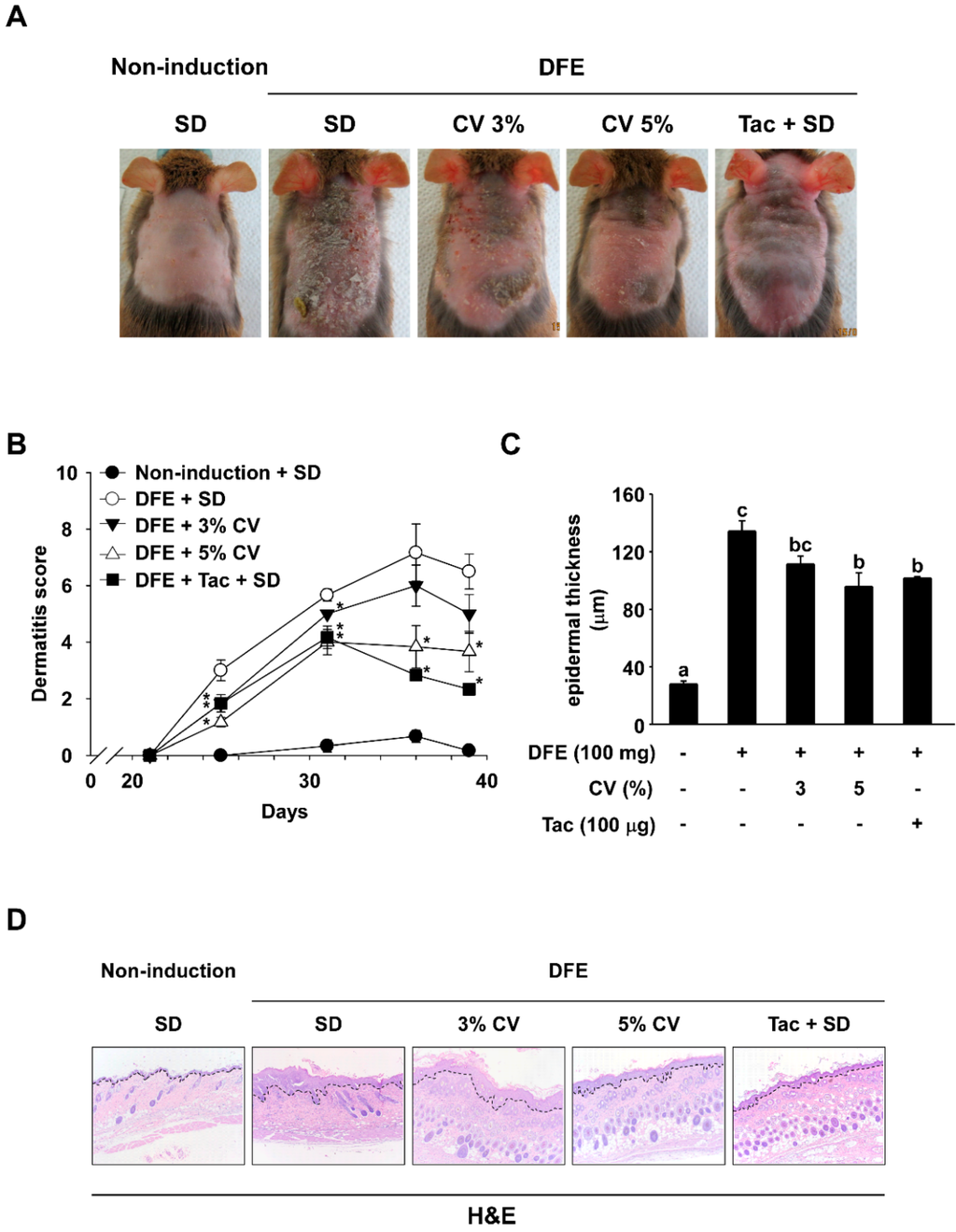 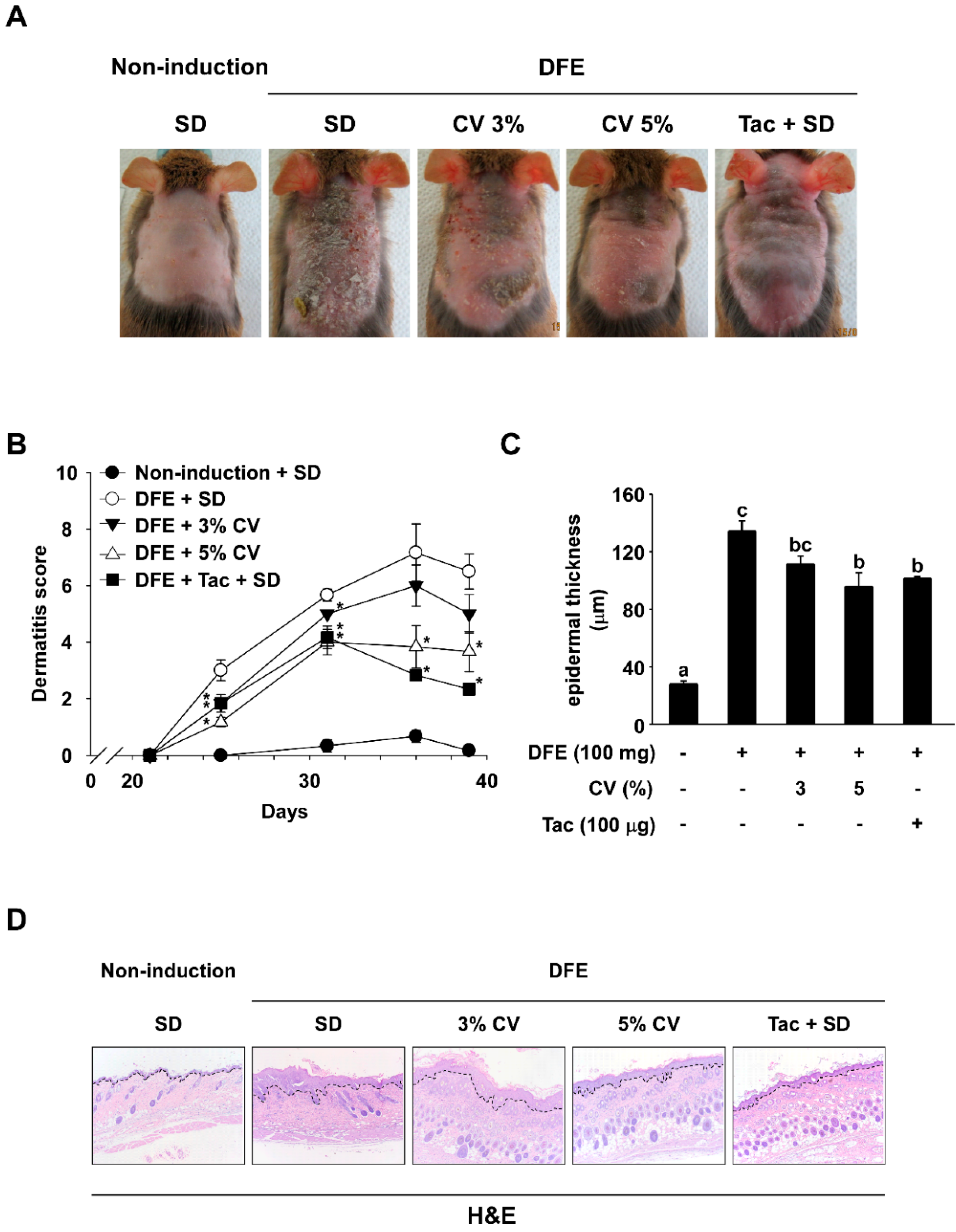 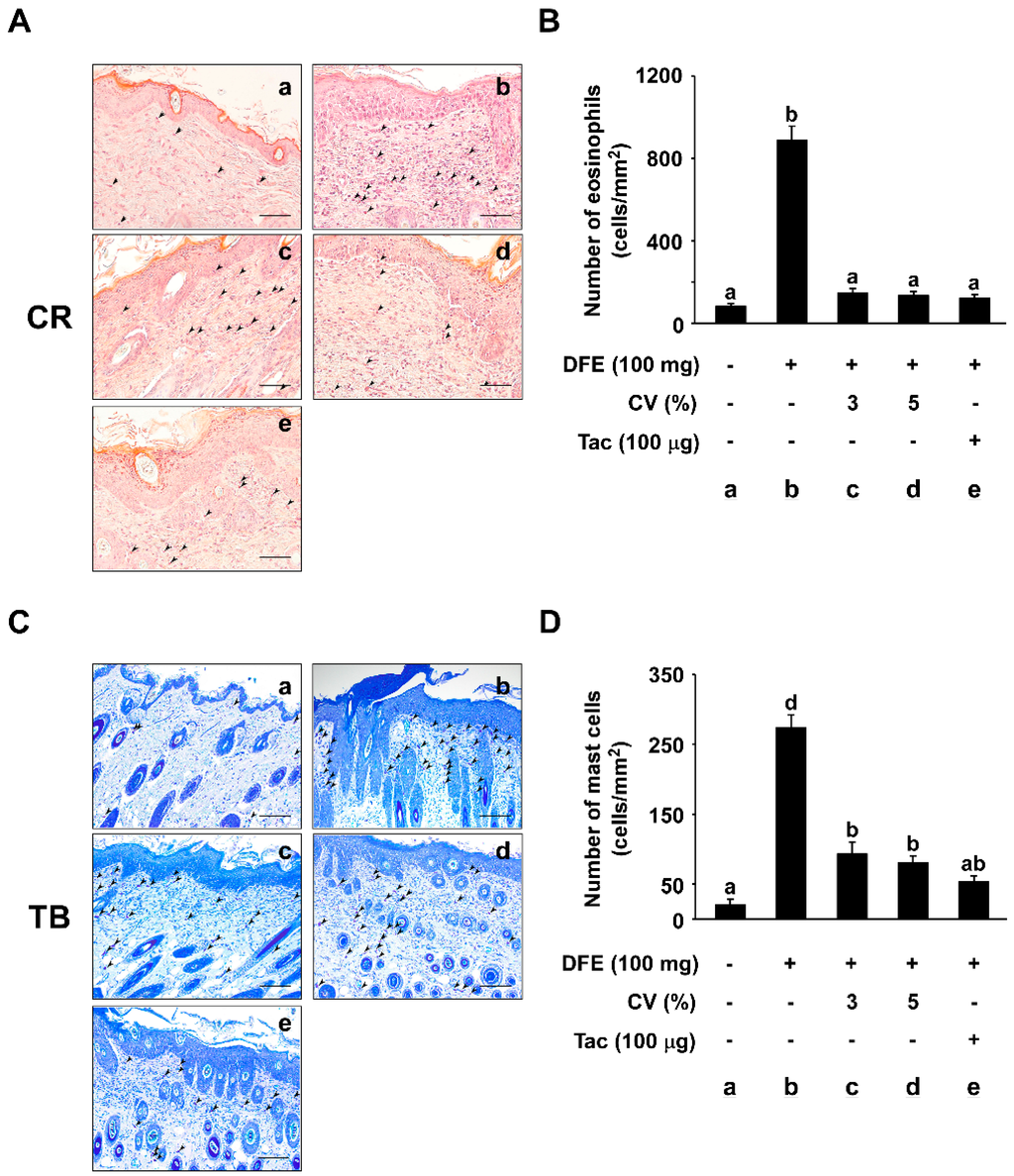 Chlorella is a promising unicellular organism for future biodiesel needs, biological materials, and as a human food source. Compared to other ordinary crop plants, chlorella grows well in a vessel or chamber, with minimal loss of water. The organism also contains a higher proportion of protein than other vegetable materials such as soybean meal and most cereals. In addition, most of the fats (75%) in chlorella are C16, C18 unsaturated fats [25]. Chlorella is therefore receiving increasing interest as a promising food source for safe, efficient, and environmentally friendly food products.
Recent clinical studies have shown that chlorella supplementation enhances natural killer cell activity and the production of Th1 cell-related cytokines in healthy subjects [26]. In addition, in vitro and in vivo studies have demonstrated that CV supplementation has an inhibitory effect on allergic immune reactions. Chlorella treatment has been shown to reduce mast cell degranulation and histamine release, while oral administration can result in a significant reduction of IgE levels in an ovalbumin-sensitized mouse model [24].
In AD patients, allergenic materials such as viral particles and pollens pass through the epidermal skin easily if the skin barrier is dysfunctional [27]. Such conditions also allow significant amounts of water to escape, leaving the skin dry [28]. Oral administration of CV has been shown to elicit positive effects for the treatment and prevention of atopic dermatitis. From a systemic point of view, many types of cytokine and chemokine are involved in the development and degenerative conditions that characterize atopic dermatitis [29]. Epithelial cells release the thymic stromal lymphopoietin cytokine after contact is made with viral particles or allergens and promote the maturation of dendritic cells, which in turn induce secretion of the chemokine TARC. TARC attracts Th2 cells toward inflammatory sites and can aggravate the symptoms of atopic dermatitis. MDC also promotes the recruitment of Th2 cells toward sites of inflammation [10]. Our results therefore suggest that CV supplementation might alleviate the symptoms of AD. The cytokine IL-4 induces B-cell class switching to IgE while enhancing production of IL-4 [30]. It also downregulates the production of Th1 cells and induces the differentiation of naive helper T cells into Th2 cells. Previous studies have demonstrated that elevated levels of IL-4 can lead to IgE synthesis in atopic dermatitis patients [31]. IFN-γ is a type 2 interferon that is important for innate and adaptive immunity. Prior studies have demonstrated that IFN-γ expression is heavily linked to the severity of atopic dermatitis [29]. We demonstrated that CV supplementation could be used to downregulate this severity by lowering IFN-γ mRNA levels.
In summary, we have shown that oral administration of CV improves atopic dermatitis-like skin lesions by modulating local and systemic immune responses. Further experiments are needed to better understand the detailed molecular mechanisms linking CV supplementation and AD severity. Clinical studies are also needed prior to its utilization by the food industry and atopic dermatitis patients. Chlorella consumption for the treatment of other allergic diseases such as allergic rhinitis and asthma may also be feasible. Additionally, the identification and isolation of compounds with anti-atopic activity from CV would provide further application possibilities. With further evidence, chlorella could become an important functional food source or health supplement for the treatment and prevention of atopic dermatitis and other allergic disorders.

The Chlorella vulgaris supplementation diet was manufactured by Daesang Co. (Seoul, Korea). First, 5 mg of CV was placed into 50 mL boiling water and stirred for 30 min. When the temperature reached 95 °C, the supernatant was collected and dried following the manufacturer’s protocol. The diet formulation was produced in pellet form. The control diet was made by mixing 2 g/kg CV or 0.005 g/kg dexamethasone (DEX) and an AIN-93G-based cereal formula (G-Bio Co., Ltd, Gwacheon, Korea). 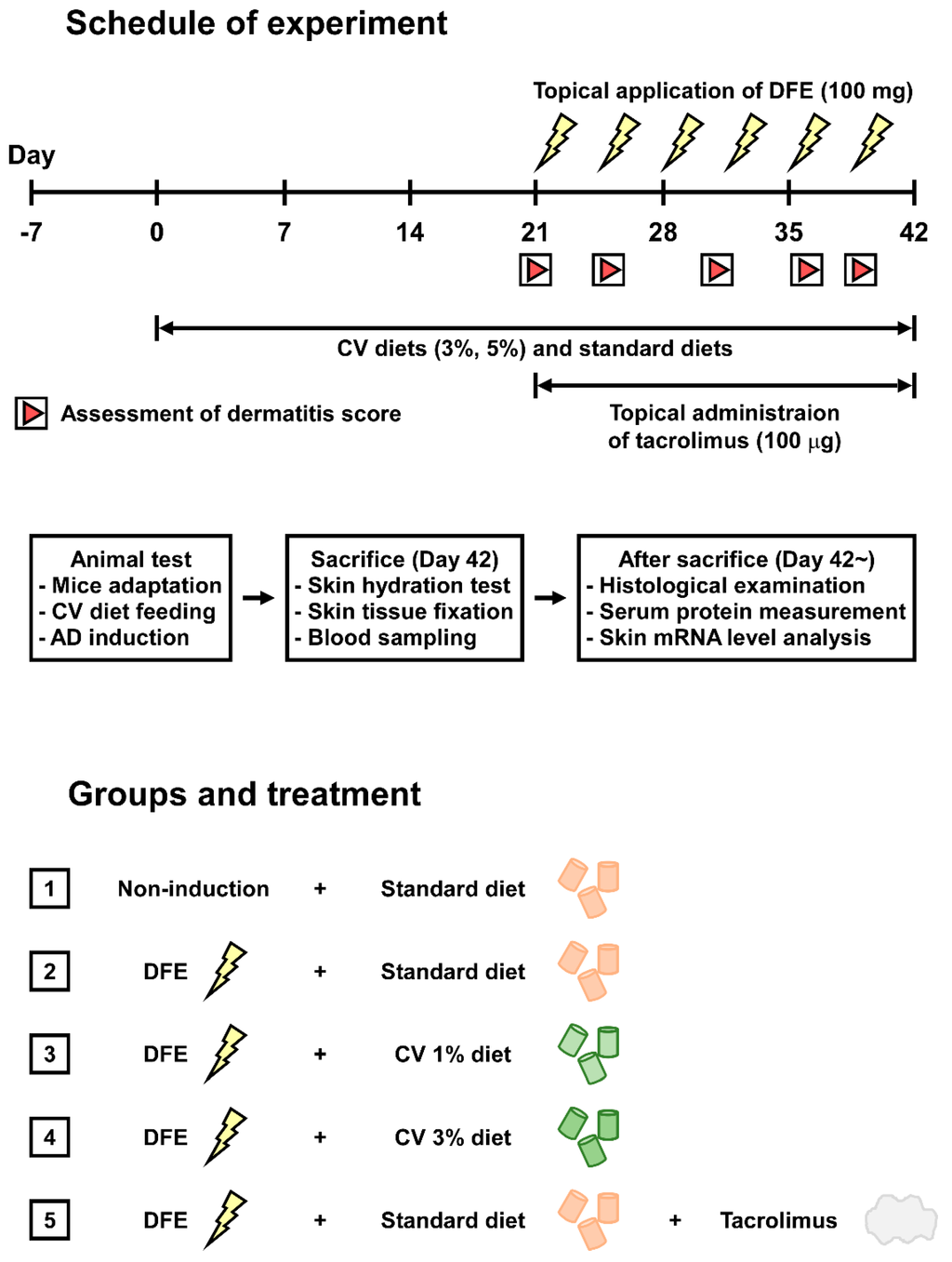 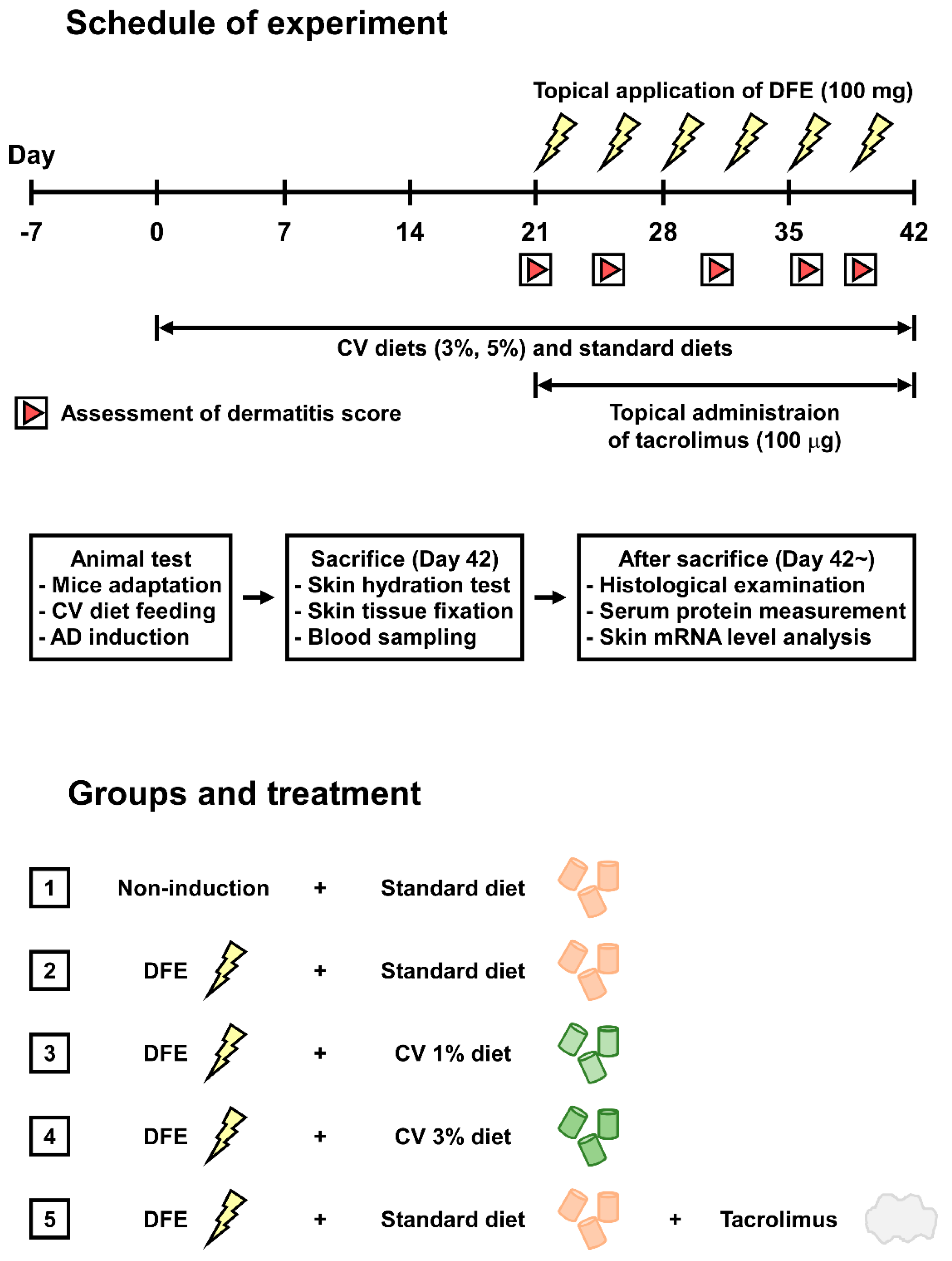 NC/Nga mice were anesthetized with 2% isoflurane (HanaPharm, Seoul, Korea) and dorsally shaved using an electric clipper (Daito Thrive, Tokyo, Japan) and shaving cream (Reckitt Benckiser, Cedex, France). To disrupt the skin barrier of the mice, 150 µL of 4% sodium dodecyl sulfate (Sigma, St. Louis, MO, USA) was topically applied. After 3 h, 100 mg Biostir-AD cream containing DFE was applied to the shaved dorsal skin, the face, and the back side of both ears of the NC/Nga mice twice weekly for three weeks to induce AD-like skin lesions.

Mice were anesthetized with 2% isoflurane, and photographs of the skin symptoms were taken using a digital camera (Canon SX 40 HS, Tokyo, Japan) on the final week of the experiment. The dermatitis scores were evaluated on five occasions over the three weeks according to criteria described previously. Scores of 0 (none), 1 (mild), 2 (moderate), and 3 (severe) were used for each of the four symptoms (erythema/hemorrhage, edema, excoriation/erosion, and scaling/dryness). A total dermatitis score indicated the AD clinical severity and each dermatitis score was aggregated (maximum score: 12).

To measure epidermal thickening, skin samples from each mouse were recovered on the final day of the experiment, and were fixed with 10% neutral-buffered formalin and embedded in paraffin. Then, 4-µm thick sections were cut and transferred onto slides. After deparaffinizing the skin sections and staining with hematoxylin and eosin, the tissue sections were examined at 100× magnification. To detect infiltration of eosinophils and mast cells, the skin of each mouse was prepared on the final day of the experiment, fixed with 10% neutral-buffered formalin, embedded in paraffin, sliced into sections (4 µm thick), and transferred onto slides. Deparaffinized skin sections were dyed with Congo red and toluidine blue, respectively. The number of eosinophils and mast cells per 0.025 mm2 skin sample was quantified at 400× magnification. Tissue sections were assessed using an Olympus AX70 light microscope (Tokyo, Japan). Epidermal thickness was examined by measuring the area-length ratio in the individual sections of mouse skin.

Blood samples were prepared from anesthetized mice by cardiac puncture on the final day of the experiment and serum obtained from the whole blood was kept at −80 °C until further use. The total levels of TARC and MDC in the serum were examined using an enzyme-linked immunosorbent assay (ELISA) Kit (R&D Systems, Minneapolis, MN, USA), following the manufacturer’s instructions.

TEWL measures the volume of water that crosses from inside an animal’s body to the surrounding atmosphere through the epidermal layer (skin) via diffusion and evaporation, and was evaluated on the final day of the experiment. TEWL in mouse dorsal skin was measured at a specific temperature (21–22 °C) and humidity (50%–55%), using a skin evaporative water recorder Tewameter TM300 (Courage and Khazaka, Cologne, Germany).

This research was supported by Bio-industry Technology Development Program (514004) of the Ministry of Agriculture, Food and Rural Affairs of Korea.