Current Proceedings in the Molecular Dissection of Hepatocellular Adenomas: Review and Hands-on Guide for Diagnosis

In the retina, a number of degenerative diseases, including glaucoma, diabetic retinopathy, and age-related macular degeneration, may occur as a result of aging. Oxidative damage is believed to contribute to the pathogenesis of aging as well as to age-related retinal disease. Although physiological exercise has been shown to reduce oxidative stress in rats and mice, it is not known whether it has a similar effect in retinal tissues. The aim of this study was to evaluate retinal oxidative stress in naturally-aged mice. In addition, we evaluated the effects of aerobic training on retinal oxidative stress by immunohistochemically evaluating oxidative stress markers. A group of twelve-week-old male mice were not exercised (young control). Two groups of twenty-two-month-old male mice were created: an old control group and a treadmill exercise group. The old control group mice were not exercised. The treadmill exercise group mice ran on a treadmill (5 to 12 m/min, 30 to 60 min/day, 3 days/week for 12 weeks). The retinal thickness and number of cells in the ganglion cell layer of the naturally-aged mice were reduced compared to those in the young control mice. However, treadmill exercise reversed these morphological changes in the retinas. We evaluated retinal expression of carboxymethyllysine (CML), 8-hydroxy-2′-deoxyguanosine (8-OHdG) and nitrotyrosine. The retinas from the aged mice showed increased CML, 8-OHdG, and nitrotyrosine immunostaining intensities compared to young control mice. The exercise group exhibited significantly lower CML levels and nitro-oxidative stress than the old control group. These results suggest that regular exercise can reduce retinal oxidative stress and that physiological exercise may be distinctly advantageous in reducing retinal oxidative stress. View Full-Text
Keywords: aging; exercise; oxidative stress; retina; treadmill aging; exercise; oxidative stress; retina; treadmill
►▼ Show Figures 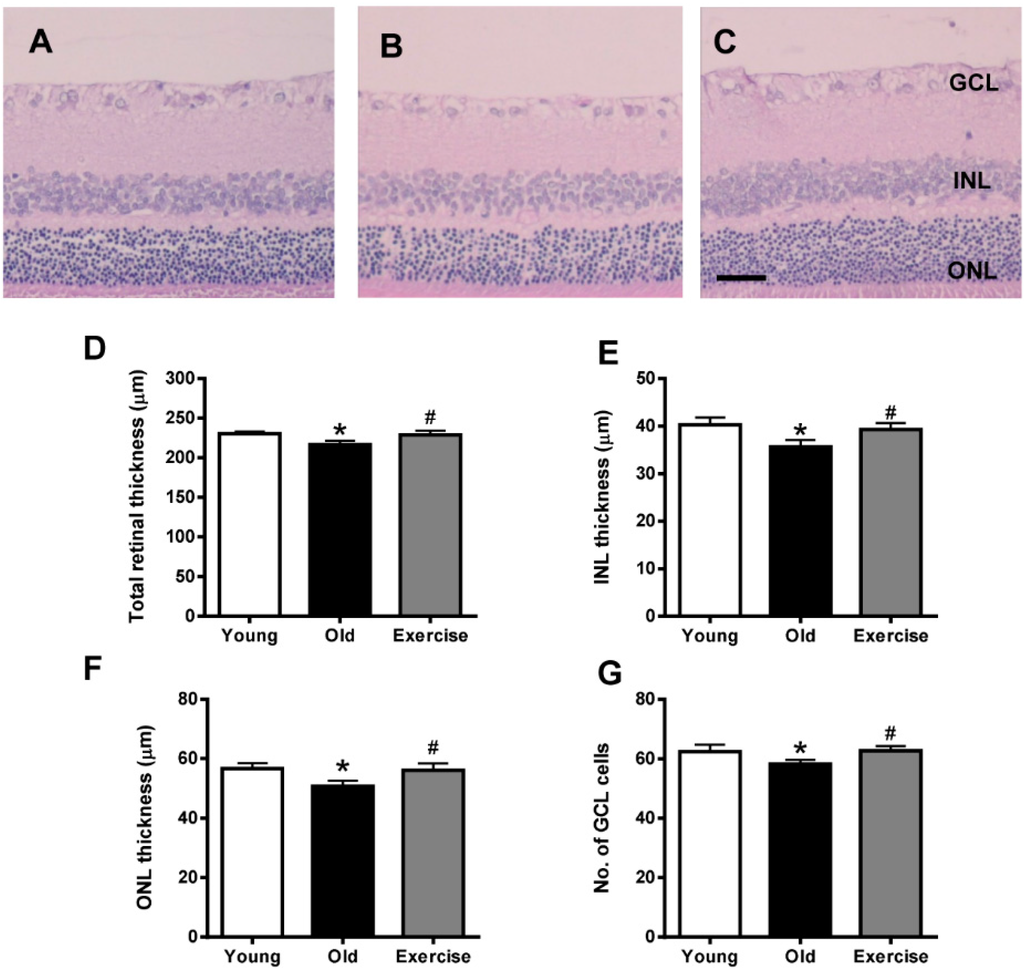