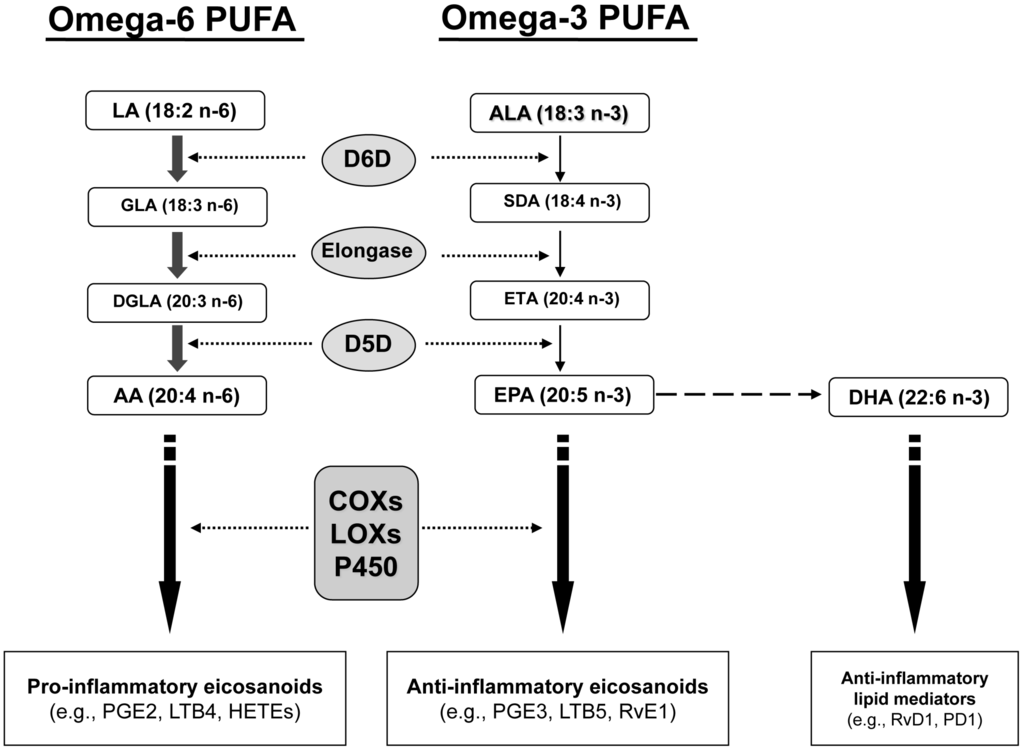 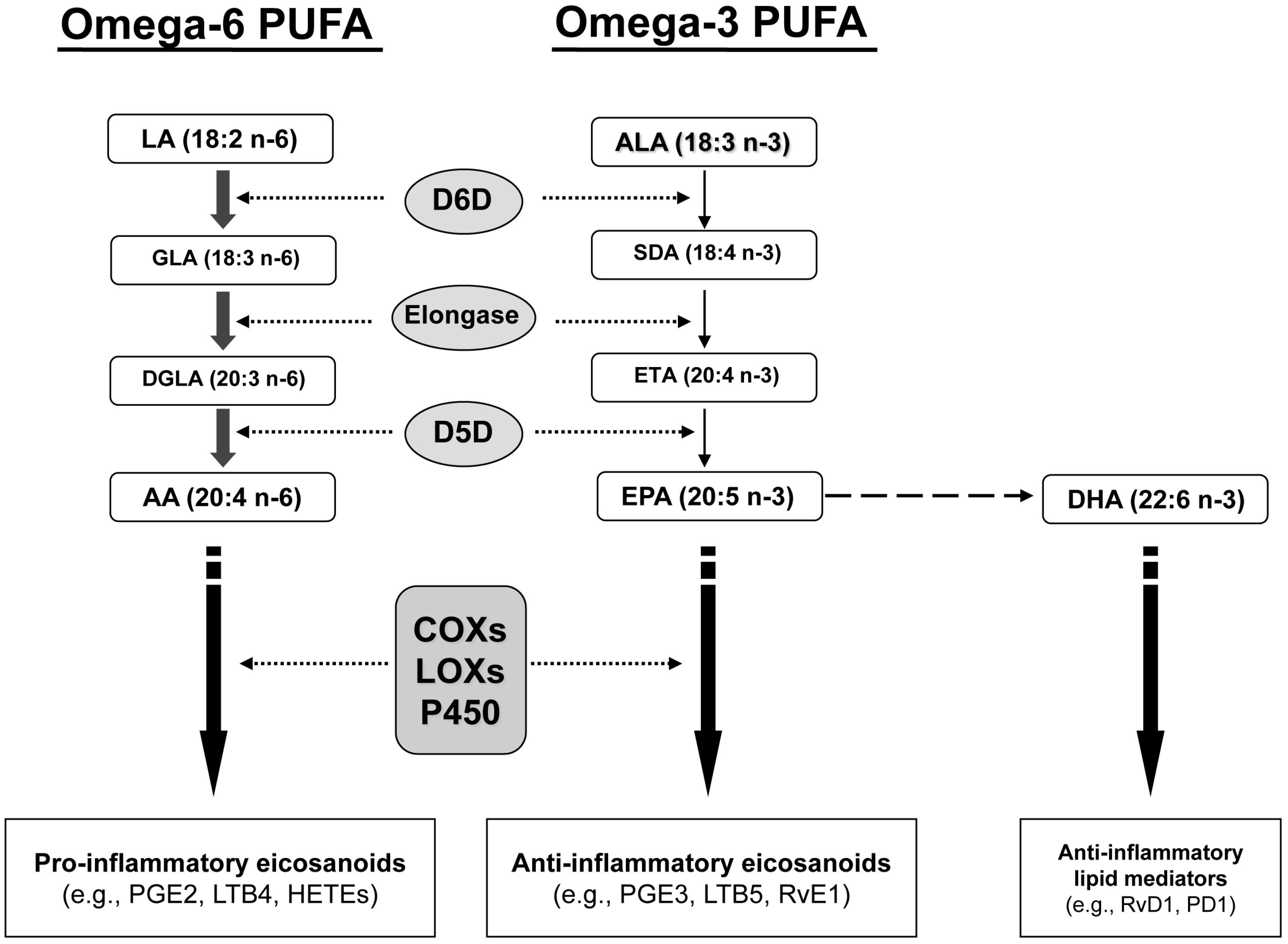 The present study is the largest study to our knowledge to analyze the RBC phospholipid fatty acid profiles of autistic individuals (n = 121) and non-autistic, non-developmentally delayed controls (n = 110). We also tested the hypothesis that PUFA metabolism is more active in autistic individuals (n = 20) than in controls by measuring plasma levels of prostaglandin E2 (PGE2), a resulting eicosanoid of COX-mediated omega-6 PUFA metabolism. 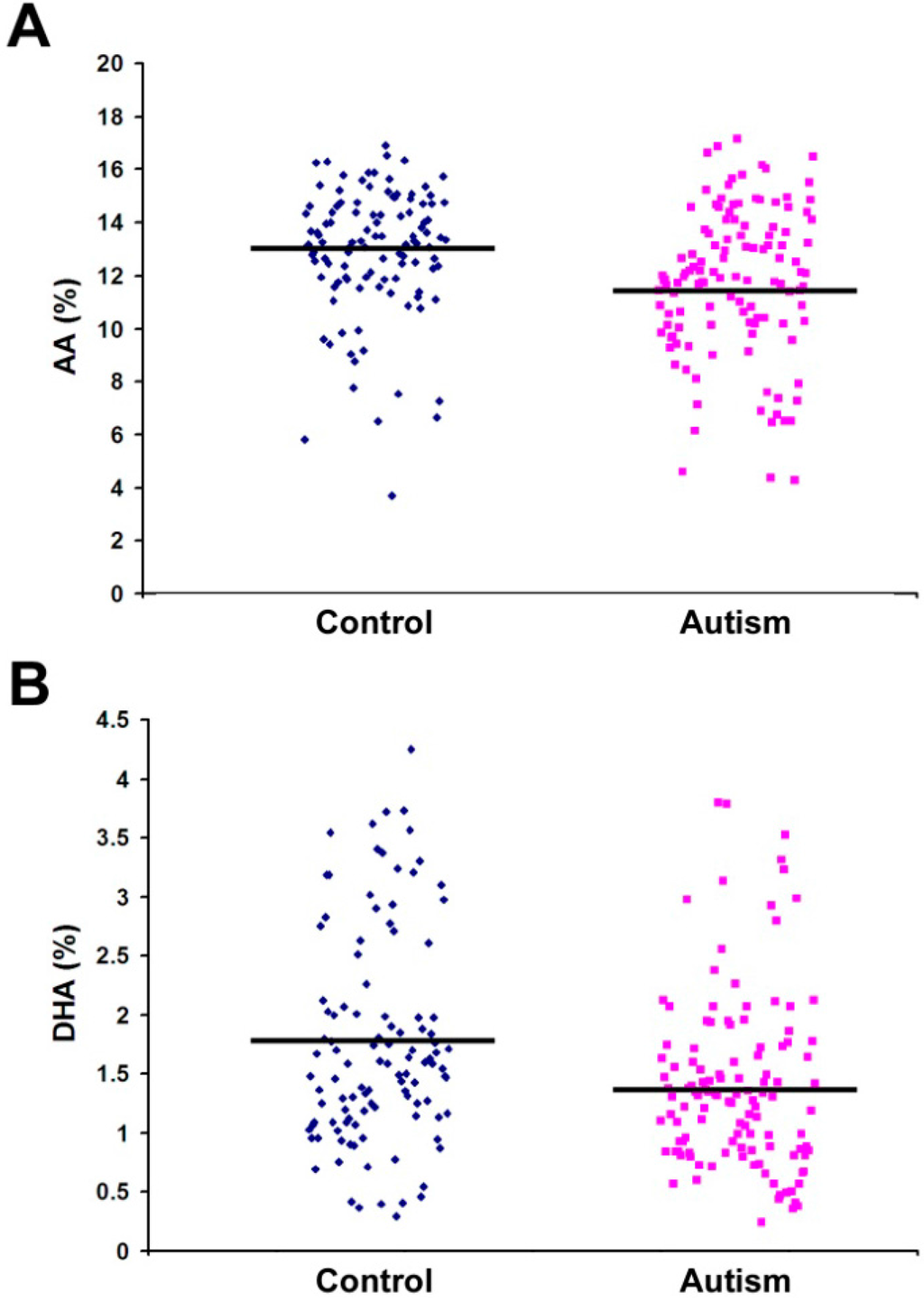 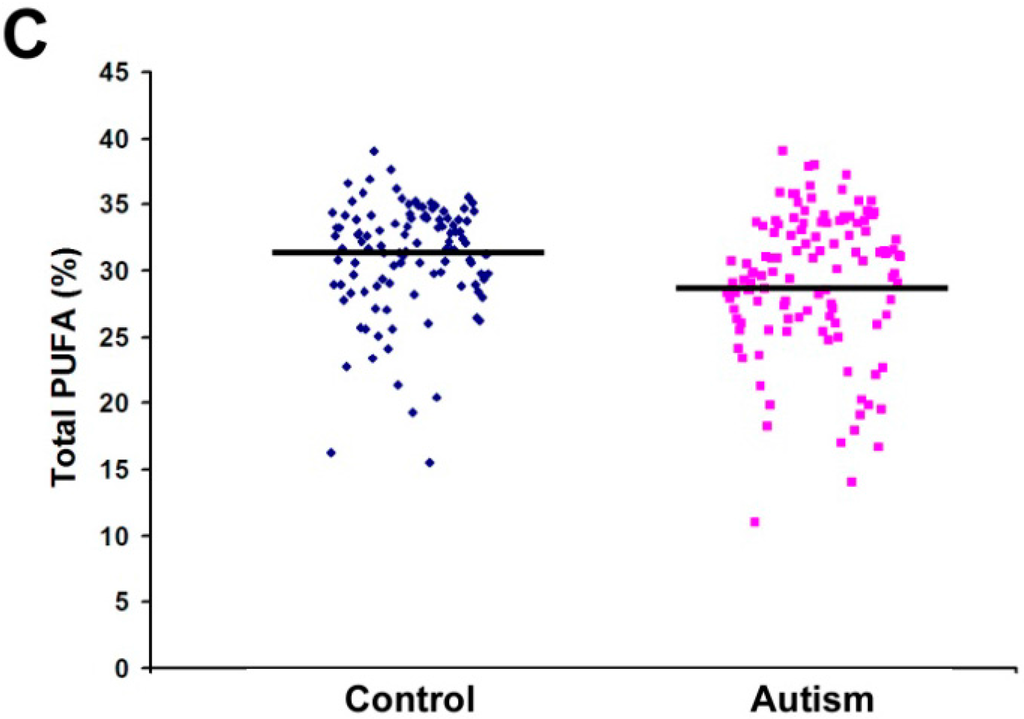 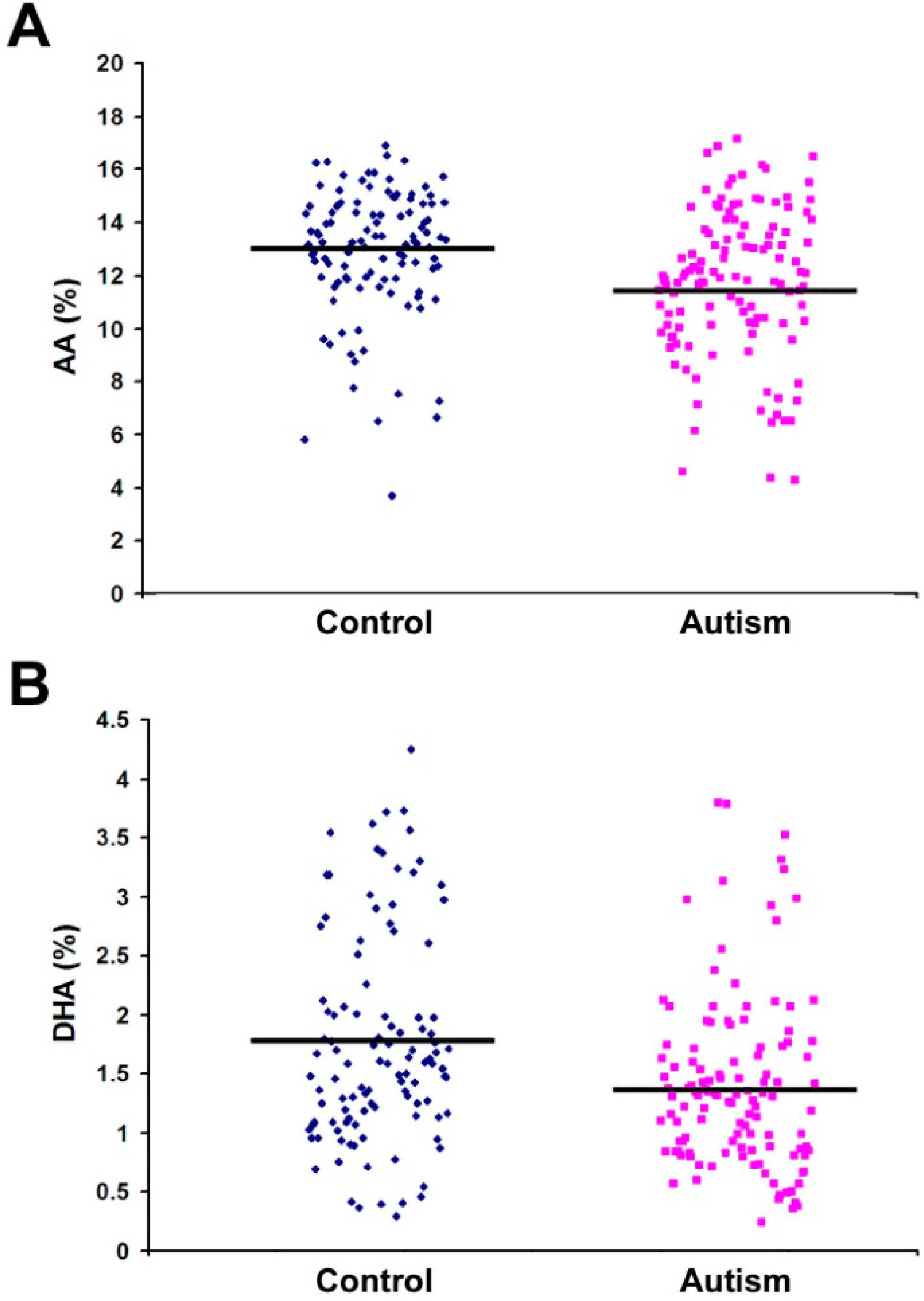 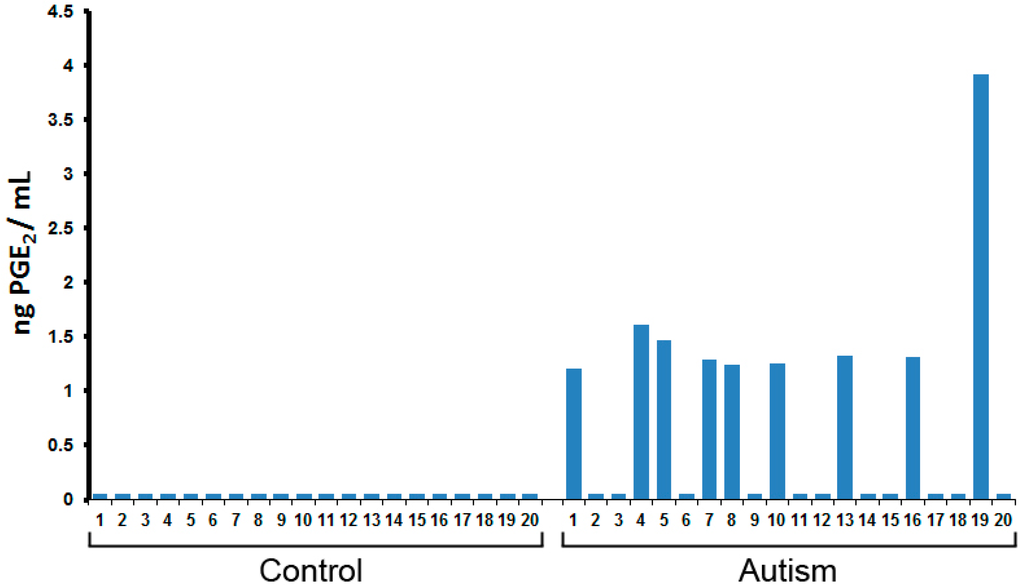 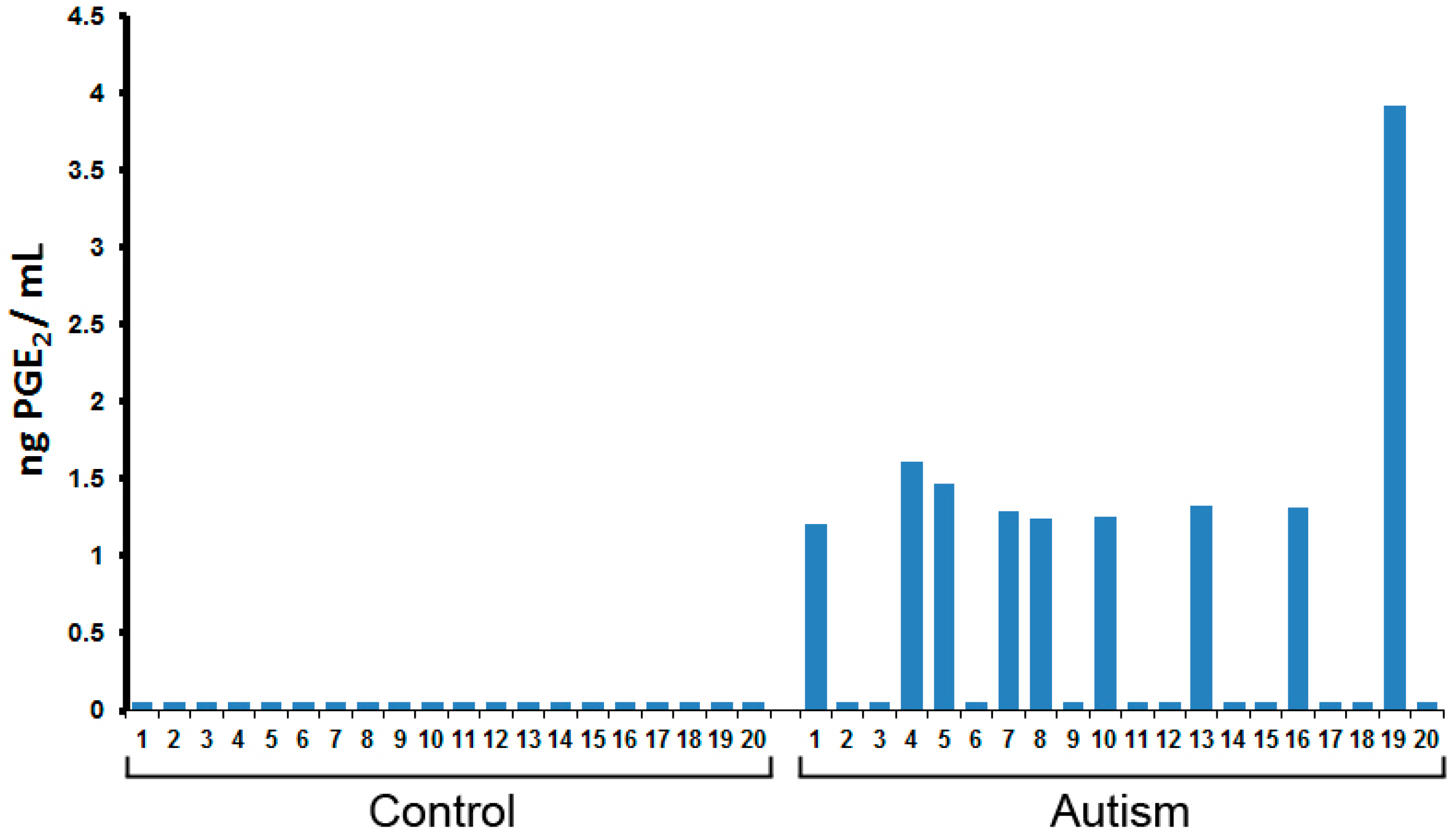 3.1. Collection and Transportation of Blood Samples

Whole blood samples were collected at Children’s Hospital Boston as part of the patients’ clinical diagnostic workup for autism. Diagnosis of autism was based on the Diagnostic and Statistical Manual for Mental Retardation (DSM-IV) and the Childhood Autism Rating Scale (CARS). Blood samples from children aged 3–17 that met the DSM-IV and CARS scores for autism were considered our autistic test group. Patients on the broader autism spectrum, including those with Asperger Syndrome and PDD-NOS, were not included in the study. The control group consisted of children aged 3–17 who went to Children’s Hospital Boston for genetic testing unrelated to developmental delay, such as hearing loss without overlapping features of autism. Test and control samples were not age nor gender-matched, although autism samples were collected at a male:female ratio of 4:1. Fasting was not a requirement prior to blood draws. All blood samples in this study were leftover samples from the clinical diagnostic work-ups. 121 whole blood samples from autistic patients and 110 control samples were frozen at −80 °C and transported to Massachusetts General Hospital (MGH) on dry ice for RBC phospholipid analysis.
For plasma PGE2 analysis, 40 fresh whole blood samples (20 from autistic group and 20 controls) were obtained to reduce hemolysis. The fresh whole blood samples were temporarily stored at 4 °C, and transported to MGH on wet ice. Upon arrival at MGH, plasma was separated from whole blood by centrifuging at 3000 rpm for 10 min at 4 °C; RBC and plasma were then stored separately at −80 °C for further analysis.
The basic research portion of the project, conducted at Massachusetts General Hospital, was exempt from IRB approval, as all samples were coded to exclude all patient information.

Lipid extraction and methylation were performed as previously described [47]. Whole blood sample was thawed on ice. 200 μL was transferred to a 10 mL capped glass vial and centrifuged at 3000 rpm for 10 min at 4 °C to pellet the cells. Supernatant was removed and the pellet was washed with 1 mL of 0.9% saline solution. Centrifugation and supernatant removal were repeated once. 1 mL of miliQ water was added to the pellet to lyse the cells. The solution was vortexed and centrifuged again at 3000 rpm for 10 min at 4 °C. Supernatant was discarded. 5 mL of lipid extraction reagent (chloroform:methanol 2:1 plus 0.005% butylated hydroxytoluene) was added to the cell pellet; the vial was sealed under nitrogen and vortexed at 4 °C for 30 min. 5 mL of 0.9% saline solution was added to the vial. The solution was vortexed and centrifuged at 3000 rpm for 10 min at room temperature (RT) to separate aqueous and organic layers. The organic chloroform (bottom) layer was transferred to a glass culture tube and allowed to dry under a steady flow of nitrogen and reconstituted in 40 μL of lipid extraction reagent.

Phospholipid isolation was performed with TLC under the following conditions: before sample loading, the silica gel-coated glass TLC plate was dried at 80 °C for 1 h; development buffer makeup was 80 mL petroleum ether: 20 mL diethyl ether: 1 mL acetic acid. After development, the plate was sprayed with anilino naphthalene sulfonic acid (ANSA) coloring reagent and visualized under UV light. The phospholipid layer was extracted from the gel and transferred to a clean 10 mL glass vial.

To the extracted phospholipid silica gel layer, 1.5 mL hexane and 1.5 mL 14% boron triflouride-methanol solution was added. The vial was sealed under nitrogen, capped tightly, and heated on a dry heat block at 100 °C for 1 h to convert the fatty acids of phospholipids to fatty acid methyl esters. Once cool, 1 mL of miliQ water was added to the vial; the vial was vortexed and centrifuged at 3000 rpm for 10 min at RT. The hexane layer containing the fatty acids was extracted, transferred to a glass culture tube, and dried under a steady stream of nitrogen gas. The dried fatty acid samples were then reconstituted in 50 μL of hexane for GC analysis.

An independent t-test assuming unequal variance was performed to compare RBC phospholipid content (measured as percentages of total quantified fatty acids) between autistic and non-autistic individuals. Statistical significance was set as p < 0.05. In order to ensure that outliers did not skew the data of the AA and DHA fatty acids, data points that fell more than 2 standard deviations away from the mean (four and nine outliers for AA and DHA, respectively) were removed and the t-test was repeated to confirm significance.

An aliquot of 350 μL plasma sample were added to 2.2 mL water. 20 μL of internal standard (D4-PGE2, 5 μg/mL, in ethanol) and 0.45 mL MeOH were added into the solution, vortexed for 1 min, and let to stand on ice for 1 h. The solution was centrifuged at 3000 rpm for 15 min, supernatant was collected and adjusted to pH 3.0 with 0.2 N HCl. The sample solution was then loaded on C-18 SPE column (preconditioned with 2 mL water and 2 mL MeOH) and washed with 1 mL water. PGE2 was then eluted with 2 mL ethyl acetate, condensed to dryness, and re-dissolved with 100 μL ETOH for LC/MS analysis.

The level of PGE2 was quantified using an internal standard curve (concentration of PGE2 vs. the peak area ratio of PGE2 to D4-PGE2).

This study was supported by the United States Department of Defense (DoD) Autism Research Program Idea Award (W81XWh-10-1-0788). The authors are also grateful to Marina Kang for her editorial assistance.