Objective: The link between alterations in circadian rhythms and depression are well established, but the underlying mechanisms are far less elucidated. We investigated the circadian characteristics of immobility behavior in wild type (WT) mice and mice with mutations in core Clock genes. Methods: All mice were tested with forced swim test (FST) at 4 h intervals. Results: These experiments revealed significant diurnal rhythms associated with immobility behavior in both male and female WT mice with sex-different circadian properties. In addition, male mice showed significantly less immobility during the night phase in comparison to female mice. Female Per1Brdm1 mice also showed significant rhythmicity. However, the timing of rhythmicity was very different from that observed in female wild type mice. Male Per1Brdm1 mice showed a pattern of rhythmicity similar to that of wild type mice. Furthermore, female Per1Brdm1 mice showed higher duration of immobility in comparison to male Per1Brdm1 mice in both daytime and early night phases. Neither Per2Brdm1 nor ClockΔ19 mice showed significant rhythmicity, but both female Per2Brdm1 and ClockΔ19 mice had lower levels of immobility, compared to males. Conclusions: This study highlights the differences in the circadian characteristics of immobility induced by FST in WT, ClockΔ19, Per1, and Per2 deficient mice.
Keywords: circadian; clock gene; mutant; sex-difference; immobility; forced swim circadian; clock gene; mutant; sex-difference; immobility; forced swim

Organisms live under the strong influence of day-night cycles, which has resulted in the development of a highly conserved circadian clock system that allows them to adjust their activities in response to recurring environmental changes. Increasing evidence suggests that alterations in circadian rhythms can have profound consequences on emotional behavior and mental health [1]. Both circadian and infradian rhythms affect human moods [2]. Patients affected by a major depressive episode often report diurnal variations of mood with typical mood worsening in the morning [3]. In addition, affective disorders, such as major depressive disorder (MDD), bipolar disorder (BP), and seasonal affective disorder (SAD) are associated with major disruptions in circadian rhythms [4].
Circadian rhythms are endogenously driven biological variations that fluctuate with a periodicity of approximately 24 h. The master circadian pacemaker, located in the hypothalamic suprachiasmatic nucleus (SCN), controls many physiological and behavioral variables. This core molecular clock is composed of a series of transcriptional and translational feedback loops that cycle over 24 h. Briefly, the CLOCK and BMAL1 heterodimerize and bind to cis-regulatory elements in a number of genes, including the three Period genes (Per1, Per2 and Per3) and the two Cryptochrome (Cry1 and Cry2) genes, and drive their expression. In turn, the expressed period and cryptochrome proteins suppress the activity of CLOCK and BMAL1 [5].
Abnormalities in the core circadian genes have been implicated in mood disorders [6]. Human genetic studies associate polymorphic variations of the Clock, and Clock-related genes, with MDD, BP and SAD [7,8]. The ClockΔ19 mutant mice display hyperactivity, less depression-like behavior, less anxiety, and increased cocaine reward values—all traits that are similar to human mania [9]. Per2 mutant mice (Per2Brdm1) have reduced immobility in the forced swim test (FST), while mice with mutations in both mPer1 and mPer2 (mPer1/mPer2ldc) have increased anxiety-related behavior [10,11]. Although these studies have indicated that the genes involved in the central circadian rhythm may regulate mood-related behaviors, few studies have investigated their roles in the circadian changes of those behaviors.
FST is now widely used both in basic research and in pharmaceutical screens for potential antidepressant treatments due to its high predictive validity [12]. In addition, “behavioral despair” just as increased immobility and decreased swimming or climbing in FST is, by some, considered an indication of “depressive-like” symptomatology [13]. To investigate the roles of core clock genes in the rhythm of response to FST, we characterized the circadian patterns of immobility behavior in wild type, ClockΔ19, Per1 (Per1Brdm1) and Per2 (Per2Brdm1) mutant mice at 4 h intervals. Sex-specific differences in the timing of the circadian system are important in determining responses to both endogenous and exogenous factors. Importantly, depression is 1.5–3 times more prevalent among women [14], indicating a sex-specific difference in depression. However, only few studies have investigated sex-specific differences in relation to the effect of circadian rhythm disturbance in depression. To address this issue, both male and female wild type (WT) and mutant mice were included in this study.

2.1.1. Sex-Specific Circadian Rhythms in the Duration of Immobility in Wild Type Mice

2.1.2. Circadian Rhythms in the Duration of Immobility Were Changed in Female, but not Male Per1Brdm1 Mice

Table 1. Circadian properties in the duration of immobility in wild type and Per1Brdm1.
Mesor = the middle value of the fitted cosine that represents a rhythm-adjusted mean; Amplitude = half of the difference between the minimum and maximum of the fitted cosine functions; # p < 0.05 peak time and nadir time compared to male mice of the same genotype; * p < 0.05, amplitude (F-test).

2.1.3. Per2Brdm1 and ClockΔ19 Mice Lost the Circadian Rhythm in Their Duration of Immobility

Table 2 shows that neither male nor female mice demonstrated significant daily rhythms of immobility, neither in Per2Brdm1 nor ClockΔ19 mice (Table 2).

Table 2. Circadian properties of the duration of immobility in Per2Brdm1 and ClockΔ19.
Mesor = the middle value of the fitted cosine that represents a rhythm-adjusted mean; Amplitude = half of the difference between the minimum and maximum of the fitted cosine functions.

2.1.4. Sex-Specific Differences in the Duration of Immobility within Each Genotype of Mice 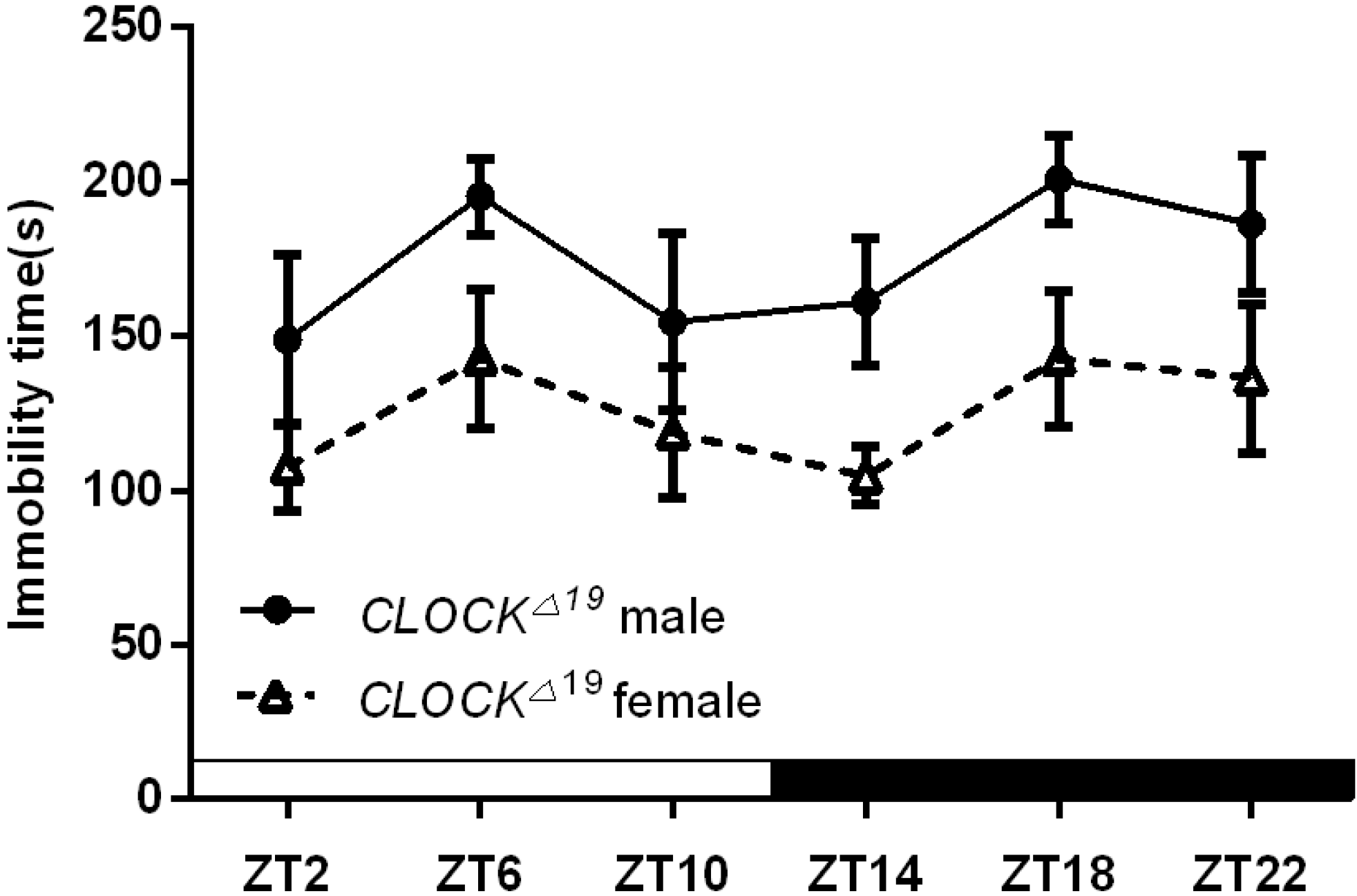 The subjects were ten- to twelve-week-old ClockΔ19, Per1 (Per1Brdm1) and Per2 (Per2Brdm1) mutant mice and age- and sex-matched WT C57BL/6J control mice. All mutant mice were backcrossed on a C57BL6 genetic background for 20 generations. All animals were housed in a temperature (21 ± 2 °C) and humidity (50% ± 5%) controlled room with food and water freely available in the home cages. Before each experiment, all mice were kept for at least 6 weeks in a 12-h light/12-h dark cycle, with lights on at 7:00 a.m. (referred to as zeitgeber time point 0, ZT0) and lights off at 7:00 p.m. (referred to as ZT12). All animal procedures were performed in accordance with the National Institute of Health’s Guide for the Care and Use of Laboratory Animals, and all procedures were approved by Institutional Review Board (Protocol Number: A12031; May 2012), Institute of Psychology, Chinese Academy of Sciences.

The forced swim test was performed as originally proposed by Porsolt et al. [30] and modified by Hirani et al. [31]. Two sessions were used in the present study. A “pre-test session” can prevent variations and help maintain consistency in the immobility time between different groups [31]. Briefly, mice were forced to swim for 15 min in an acrylic circular cylinder (35 cm in diameter) filled with 25 °C water to a depth of 30 cm. After pre-exposure, mice were placed in a separate cage, towel dried, and then returned to their home cage. Twenty-four hours later, they were submitted to a 5 min test session of forced swim, and the total time spent immobile was recorded. The test was performed during nighttime in the darkness. The mice were judged immobile when they ceased struggling and remained floating motionless in the water (without any vertical or horizontal movements), making only the movements necessary to keep their heads above the water level. Naïve mice were used to perform FST at each time point (n = 6–9 for each group at each time point).

The circadian rhythms of dependent variables were generated using the single cosinor method to calculate the mesor (i.e., the middle value of the fitted cosine that represents a rhythm adjusted mean), the amplitude (i.e., half of the difference between the minimum and maximum of the fitted cosine function), and the standard error of their dispersions [32]. The duration of immobility of peak and nadir were compared by t-test. Sex-specific differences in the duration of immobility for each type of mouse were analyzed using two-way analysis of variance (ANOVA) followed by least significant difference (LSD) post hoc with the between sex factors (male or female) and the within subjects factor of test condition (Zeitgeber time). The level of statistical significance was set at p < 0.05.

This work was supported by the National Natural Science Foundation of China (No. 91132728), and Key Laboratory of Mental Health, Institute of Psychology, Chinese Academy of Sciences. We appreciated Carsten Gleesborg for his critical reading and revising of this paper.