Age-Dependent Changes in the Inflammatory Nociceptive Behavior of Mice

The processing of pain undergoes several changes in aging that affect sensory nociceptive fibers and the endogenous neuronal inhibitory systems. So far, it is not completely clear whether age-induced modifications are associated with an increase or decrease in pain perception. In this study, we assessed the impact of age on inflammatory nociception in mice and the role of the hormonal inhibitory systems in this context. We investigated the nociceptive behavior of 12-month-old versus 6–8-week-old mice in two behavioral models of inflammatory nociception. Levels of TRP channels, and cortisol as well as cortisol targets, were measured by qPCR, ELISA, and Western blot in the differently aged mice. We observed an age-related reduction in nociceptive behavior during inflammation as well as a higher level of cortisol in the spinal cord of aged mice compared to young mice, while TRP channels were not reduced. Among potential cortisol targets, the NF-κB inhibitor protein alpha (IκBα) was increased, which might contribute to inhibition of NF-κB and a decreased expression and activity of the inducible nitric oxide synthase (iNOS). In conclusion, our results reveal a reduced nociceptive response in aged mice, which might be at least partially mediated by an augmented inflammation-induced increase in the hormonal inhibitory system involving cortisol. View Full-Text
Keywords: nociception; inflammation; age; cortisol nociception; inflammation; age; cortisol
►▼ Show Figures 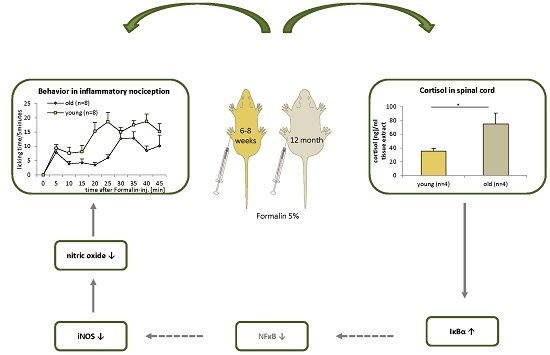