Ovarian carcinoma (OC) is one of the most common gynecological malignancies, with a poor prognosis for patients at advanced stage. Danusertib (Danu) is a pan-inhibitor of the Aurora kinases with unclear anticancer effect and underlying mechanisms in OC treatment. This study aimed to examine the cancer cell killing effect and explore the possible mechanisms with a focus on proliferation, cell cycle progression, apoptosis, autophagy, and epithelial to mesenchymal transition (EMT) in human OC cell lines C13 and A2780cp. The results showed that Danu remarkably inhibited cell proliferation, induced apoptosis and autophagy, and suppressed EMT in both cell lines. Danu arrested cells in G2/M phase and led to an accumulation of polyploidy through the regulation of the expression key cell cycle modulators. Danu induced mitochondria-dependent apoptosis and autophagy in dose and time-dependent manners. Danu suppressed PI3K/Akt/mTOR signaling pathway, evident from the marked reduction in the phosphorylation of PI3K/Akt/mTOR, contributing to the autophagy inducing effect of Danu in both cell lines. In addition, Danu inhibited EMT. In aggregate, Danu exerts potent inducing effect on cell cycle arrest, apoptosis, and autophagy, but exhibits a marked inhibitory effect on EMT. PI3K/Akt/mTOR signaling pathway contributes, partially, to the cancer cell killing effect of Danu in C13 and A2780cp cells.
Keywords: danusertib; ovarian cancer; cell cycle; apoptosis; autophagy; epithelial to mesenchymal transition danusertib; ovarian cancer; cell cycle; apoptosis; autophagy; epithelial to mesenchymal transition

Ovarian cancer is the eighth most common type of cancer and the seventh most common cause of cancer-related death in women globally, with 239,000 new cases and around 152,000 deaths in 2012 [1]. In 2015, there has been an estimated 21,290 cases and 14,180 deaths related to ovarian cancer in the US [2], it is the eighth most common cancer and the fifth leading cause of cancer related death, after lung and bronchus, breast, colorectal, and pancreatic cancers in the US [3]. In China, there is an increasing estimated incidence of ovarian cancer [1,4]. The incidence has increased by 30% in the last decade and the mortality rate has increased by 18% with 15,000 deaths each year [1,4]. Clinically, most patients with epithelial ovarian cancer (EOC) are diagnosed at advanced stage with cancer cell metastasis, which substantially jeopardizes the therapeutic opportunity, compromises the therapeutic effect, and increases the risk of recurrence and early death [5]. It has been demonstrated that peritoneal dissemination and ascites are the major causes of patient morbidity and mortality; and currently, platinum- and taxane-based chemotherapy is standard of care for the first-line treatment of patients with advanced ovarian, fallopian tube, or peritoneal cancer [5]. Although responses are observed in up to ~80% of patients; 70%–80% of responding patients eventually will relapse and require further systemic chemotherapy and the five-year survival rate is about 30% to 60% [6]. Patients who relapse >6–12 months after completing platinum-based chemotherapy may respond again to platinum-based therapy, however, it considerably limits the repeated use of platinum agents due to acquired resistance or intolerance in clinical practice [6]. Therefore, there is an urgent need to develop new, safe, and effective therapeutics for the treatment of advanced EOC.
The Aurora kinases belong to the family of highly conserved serine/threonine protein kinases, with an essential role in controlling entry into mitosis, centrosome function, chromosome assembly and segregation [7]. There are three members of the family, including aurora kinase A, B, and C (AURKA/B/C). AURKA is essential for the timely entry into the M phase of the cell cycle, maintaining spindle bipolarity and chromosome segregation. AURKB is required for chromosome condensation, alignment on the spindle, spindle checkpoint function, and cytokinesis. Little is known about the role of AURKC. As the key regulators of mitosis, Aurora kinases are frequently overexpressed in cancer cells and accumulating evidence shows that the aberration in the activity and expression of Aurora kinases has been implicated in the pathogenesis of many types of cancer [8]. Therefore, Aurora kinases have emerged as attractive therapeutic targets for cancer therapies [9,10].
Recently, several small-molecule inhibitors of Aurora kinases have been developed and some of them have shown clinical efficacy in phase I and II clinical trials [11,12]. Among of those, one of the most advanced compounds is Danusertib (Danu, formerly PHA-739358) (Figure 1A), which exerts potent inhibitory activity against AURKA, B, and C with the IC50 value of 13, 79, and 61 nM, respectively [13,14,15]. Danu has been investigated in Phase I and II trials, showing a great therapeutic potential in the treatment of a wide range of cancers [14,16]. Moreover, Danu has also shown variable anticancer effect at different stages of preclinical experimental settings [17,18]. However, the effect and underlying mechanisms of Danu have not yet been fully unveiled in ovarian cancer, in particular, under the circumstance of drug resistance. In the present study, we aimed to investigate the effect of Danu on the proliferation, cell cycle distribution, apoptosis, autophagy, and epithelial-to-mesenchymal transition (EMT), and explored the possible mechanisms underlying the anticancer effect of Danu in ovarian cancer cell lines C13 and A2780cp. Notably, these two cell lines are resistant to cisplatin, which often causes therapeutic failure in clinical practice, which emphasizes the importance of the investigation on the effect of Danu in cisplatin resistant cells in the present study. 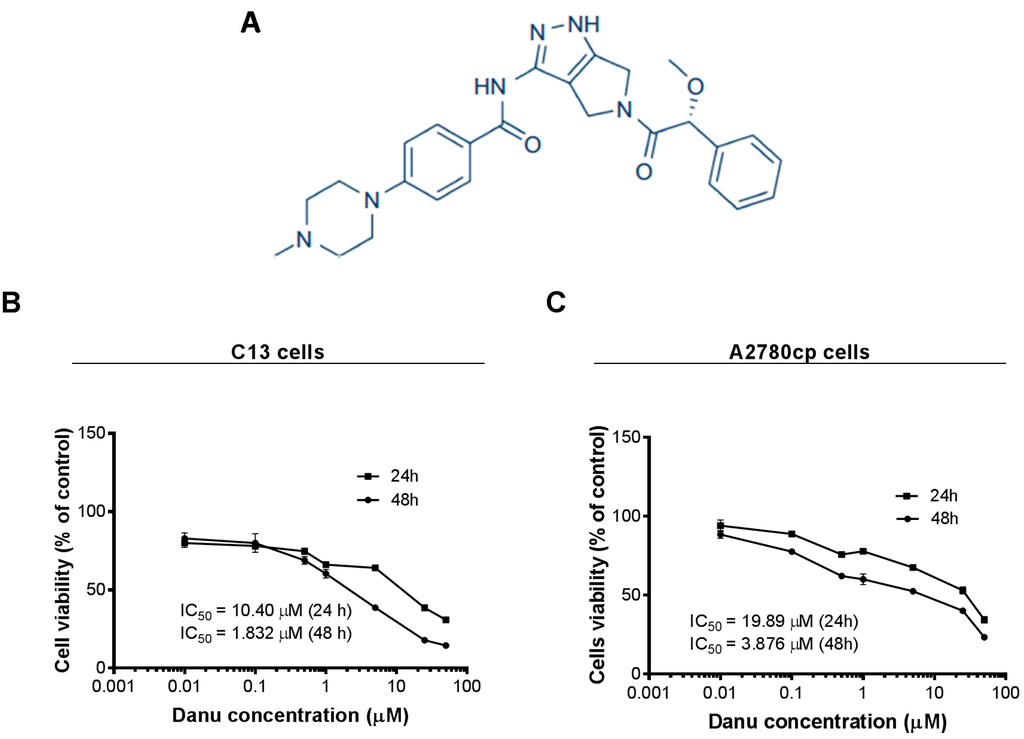 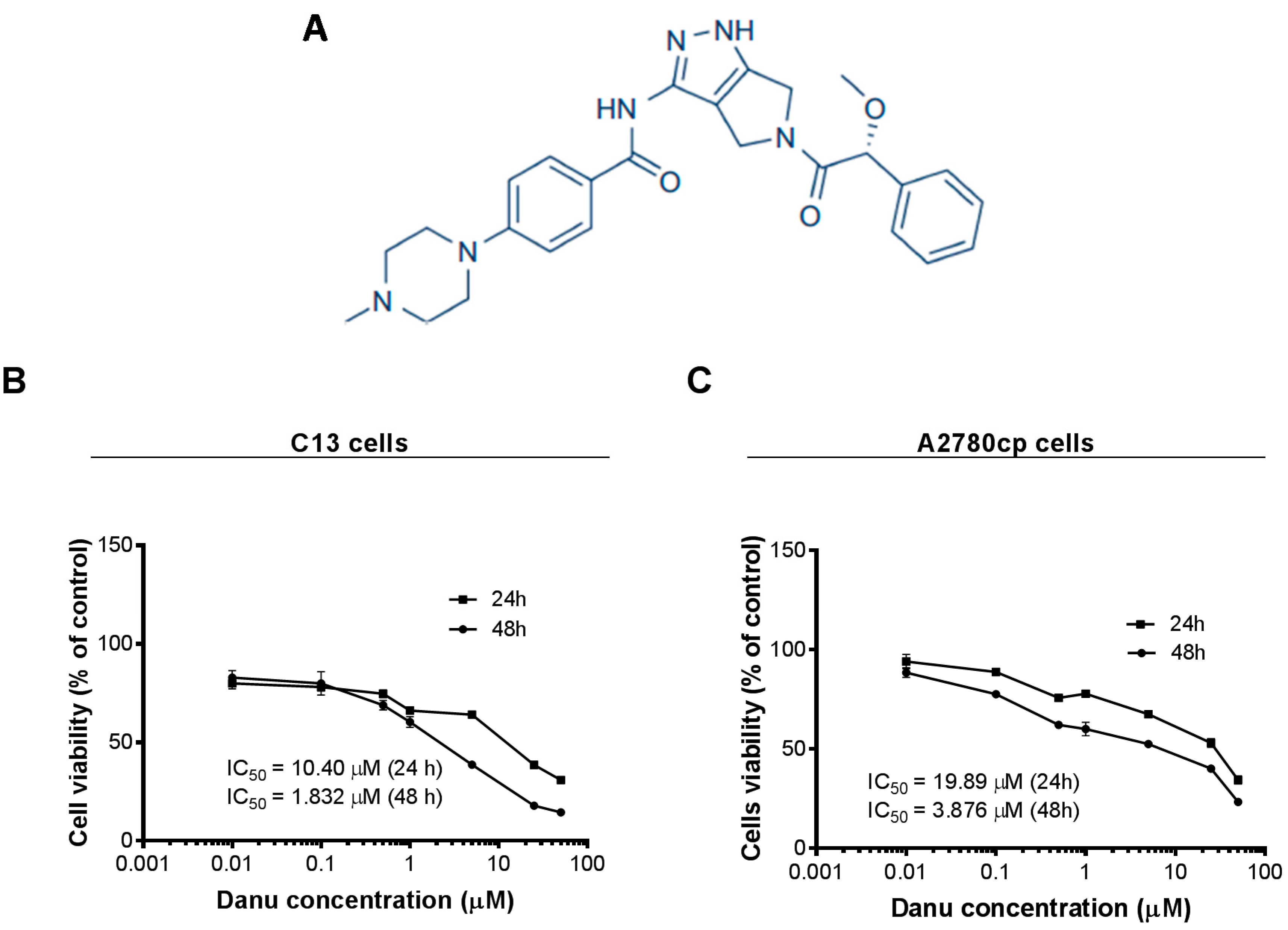 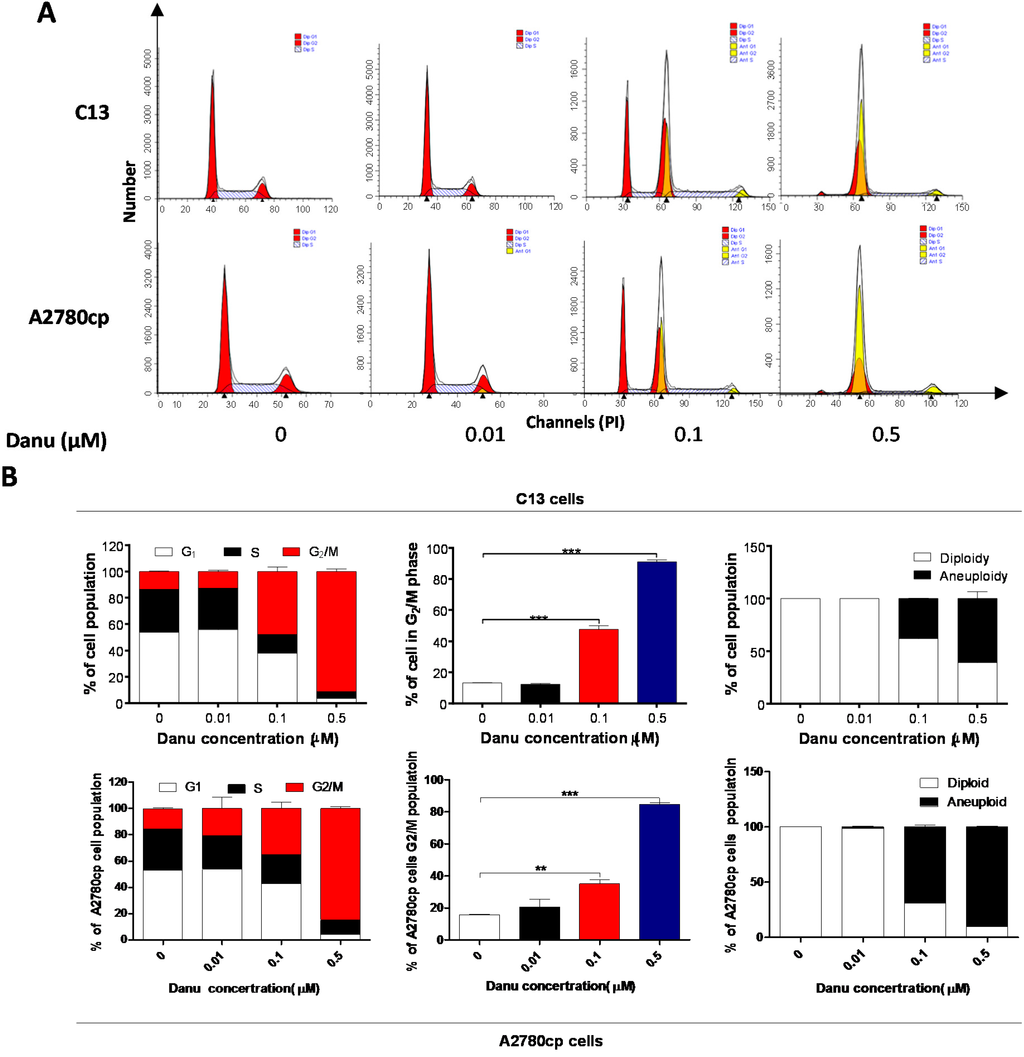 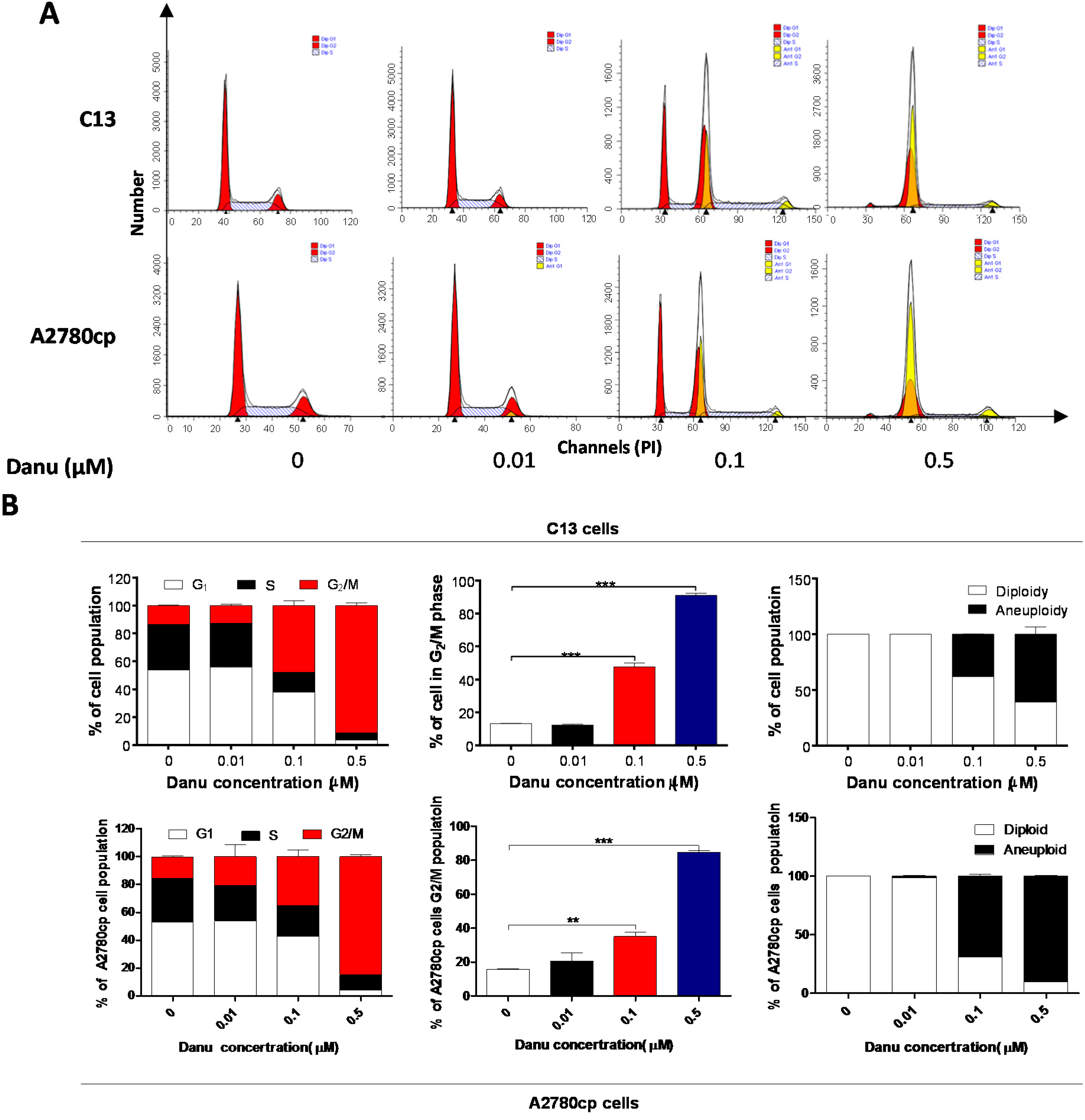 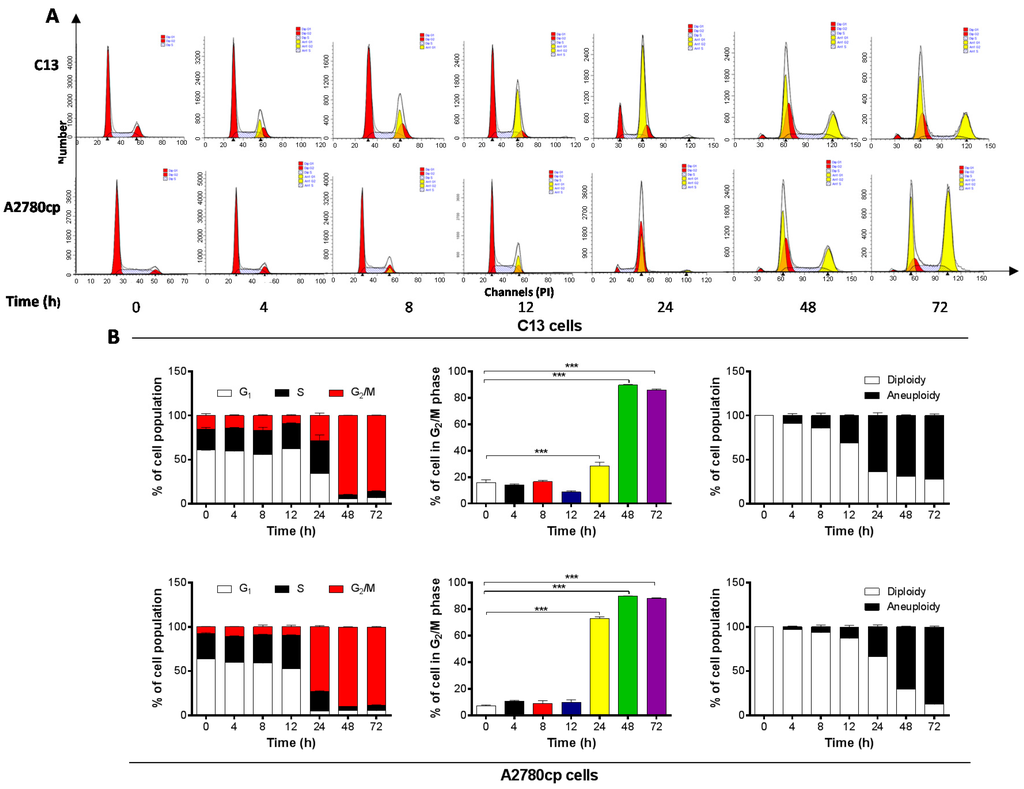 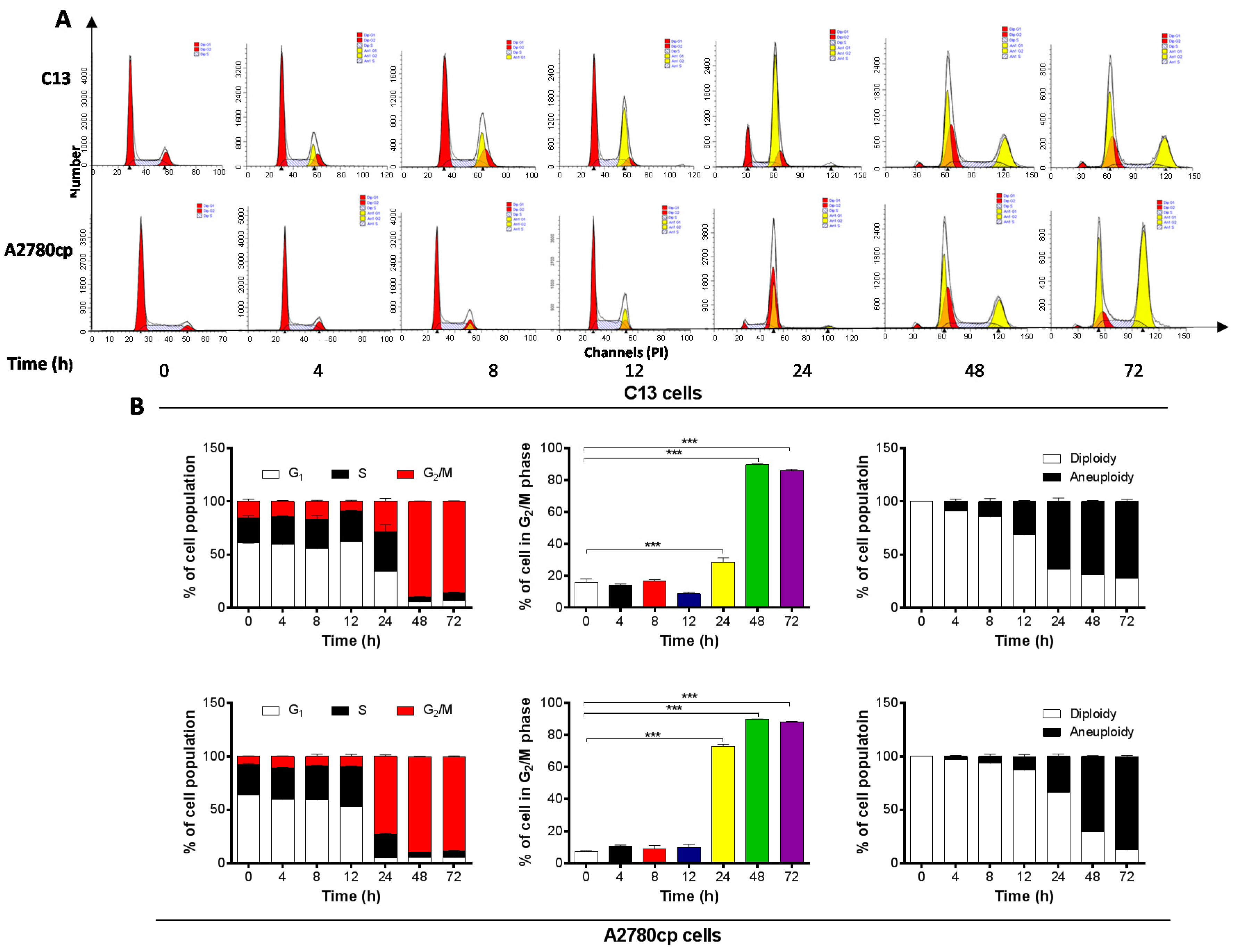 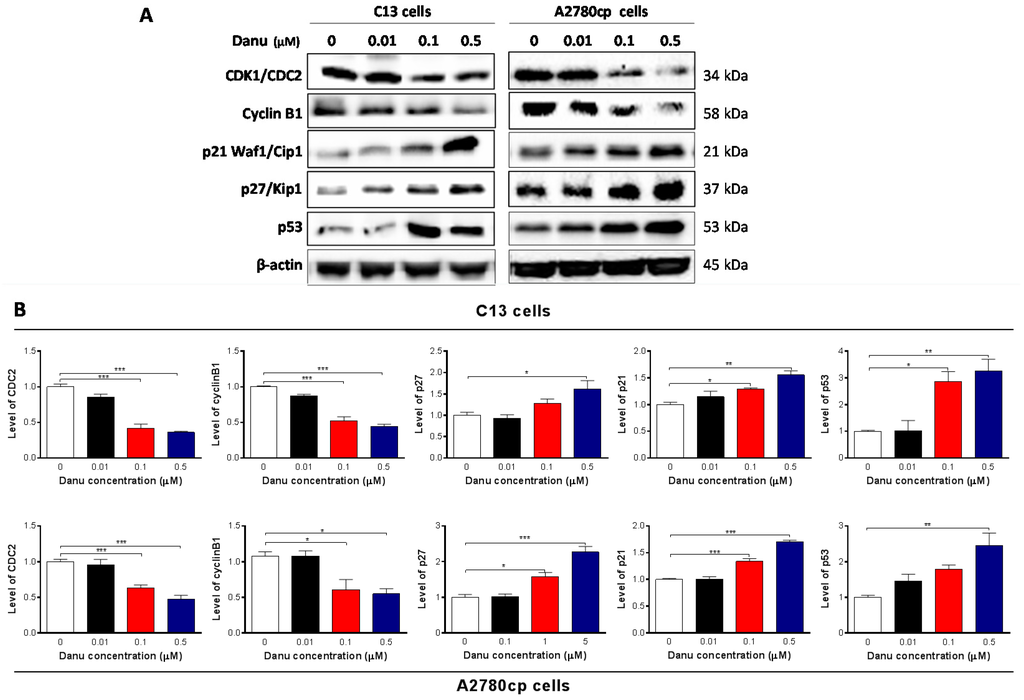 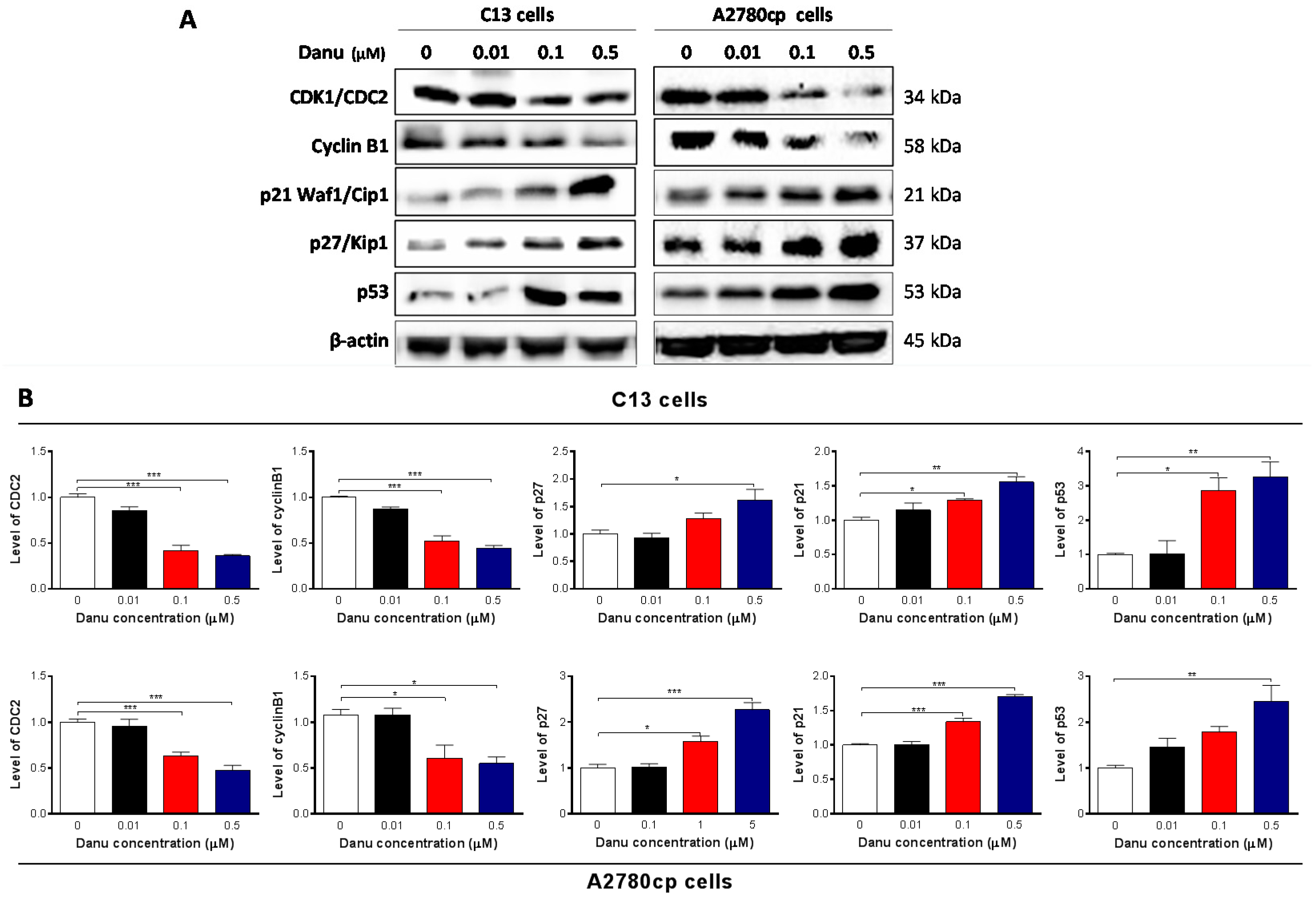 2.4. Danu Induces Apoptosis of C13 and A2780cp Cells via Activation of Mitochondria-Dependent Pathway 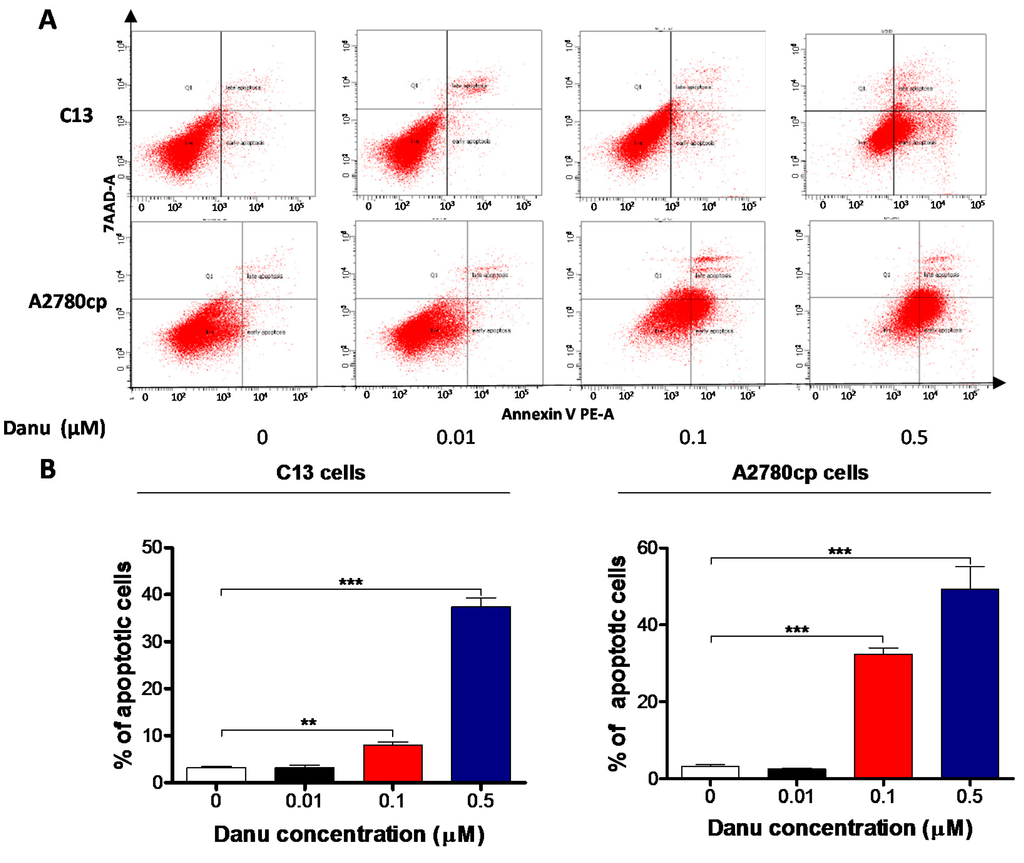 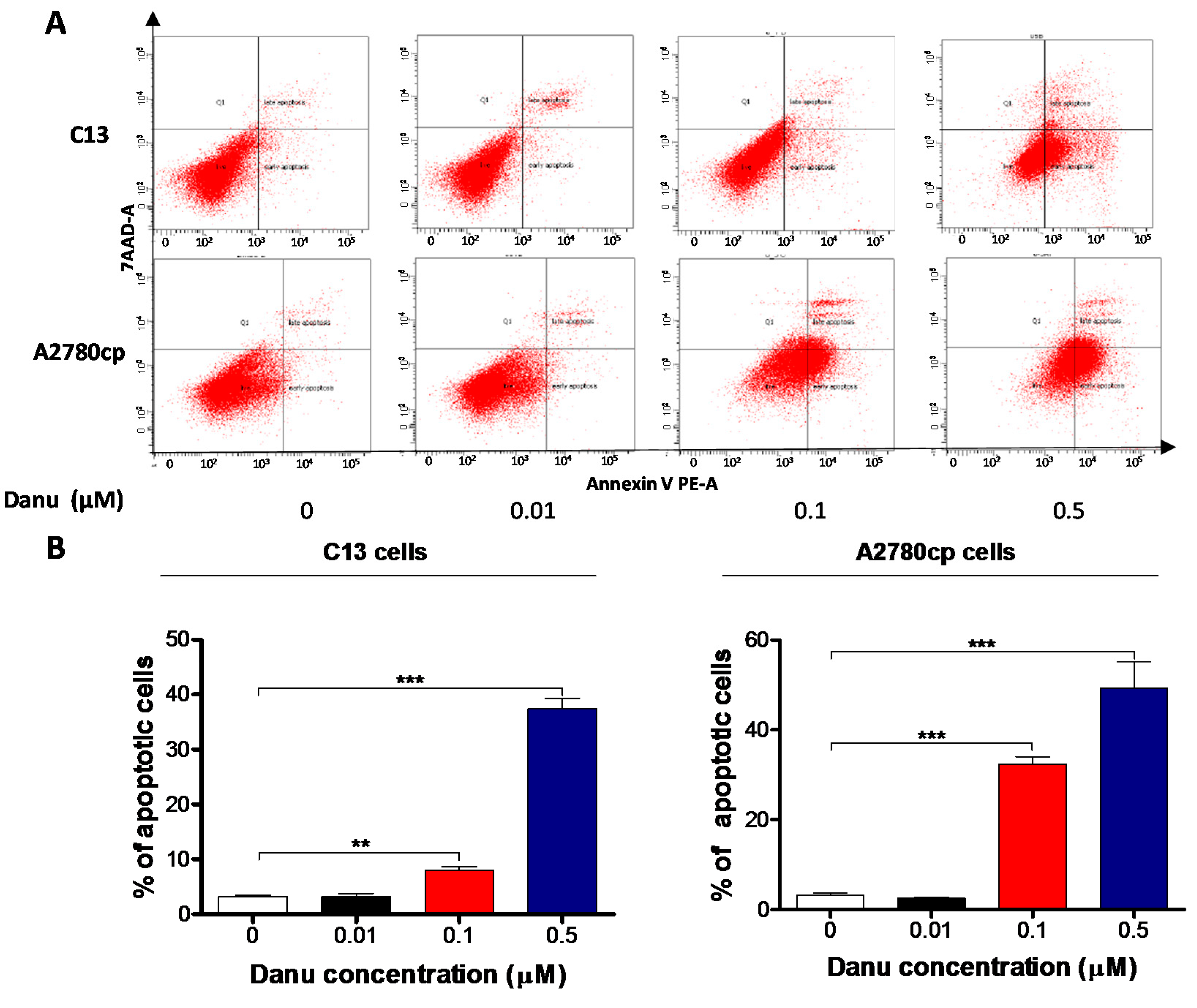 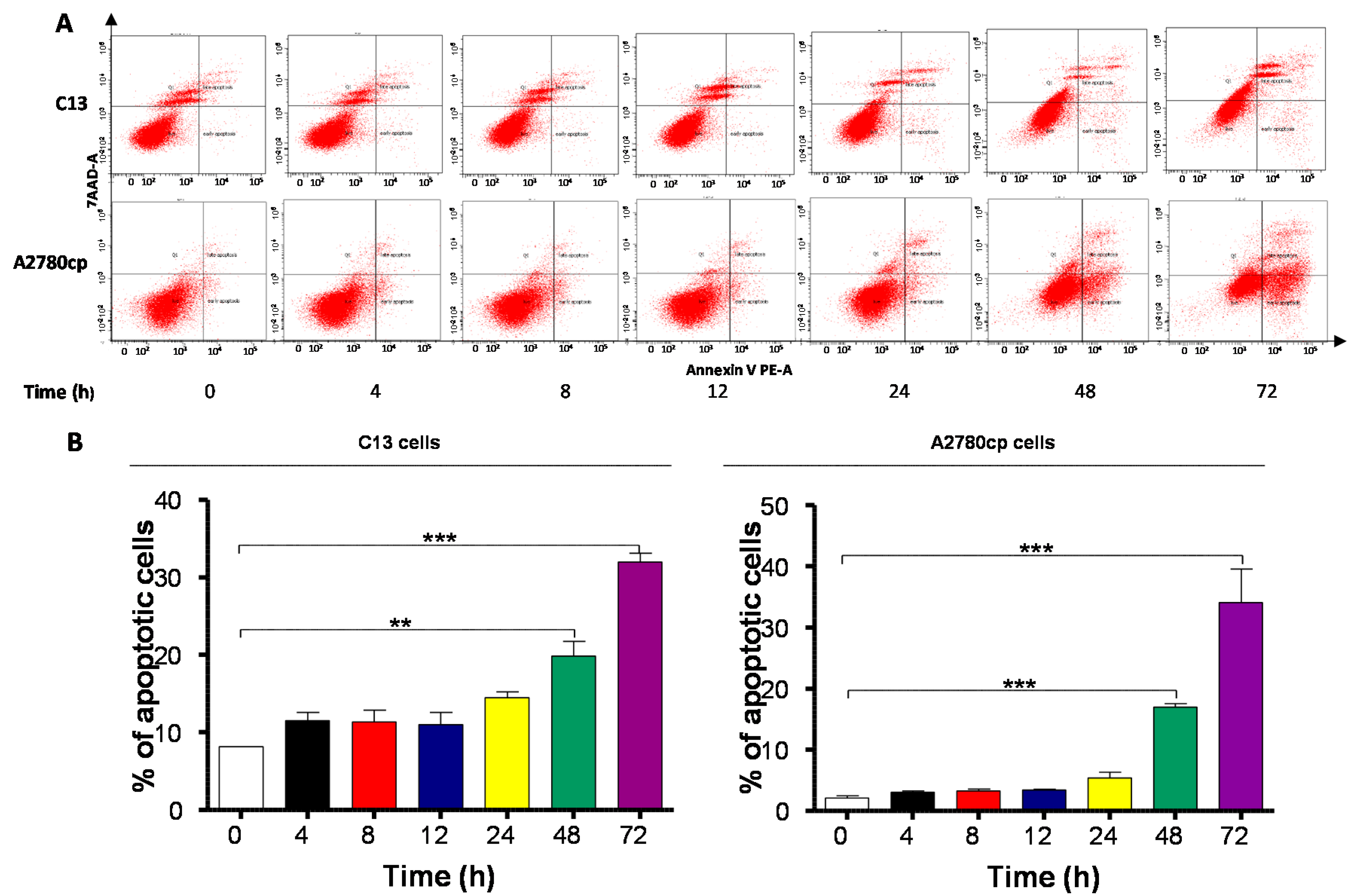 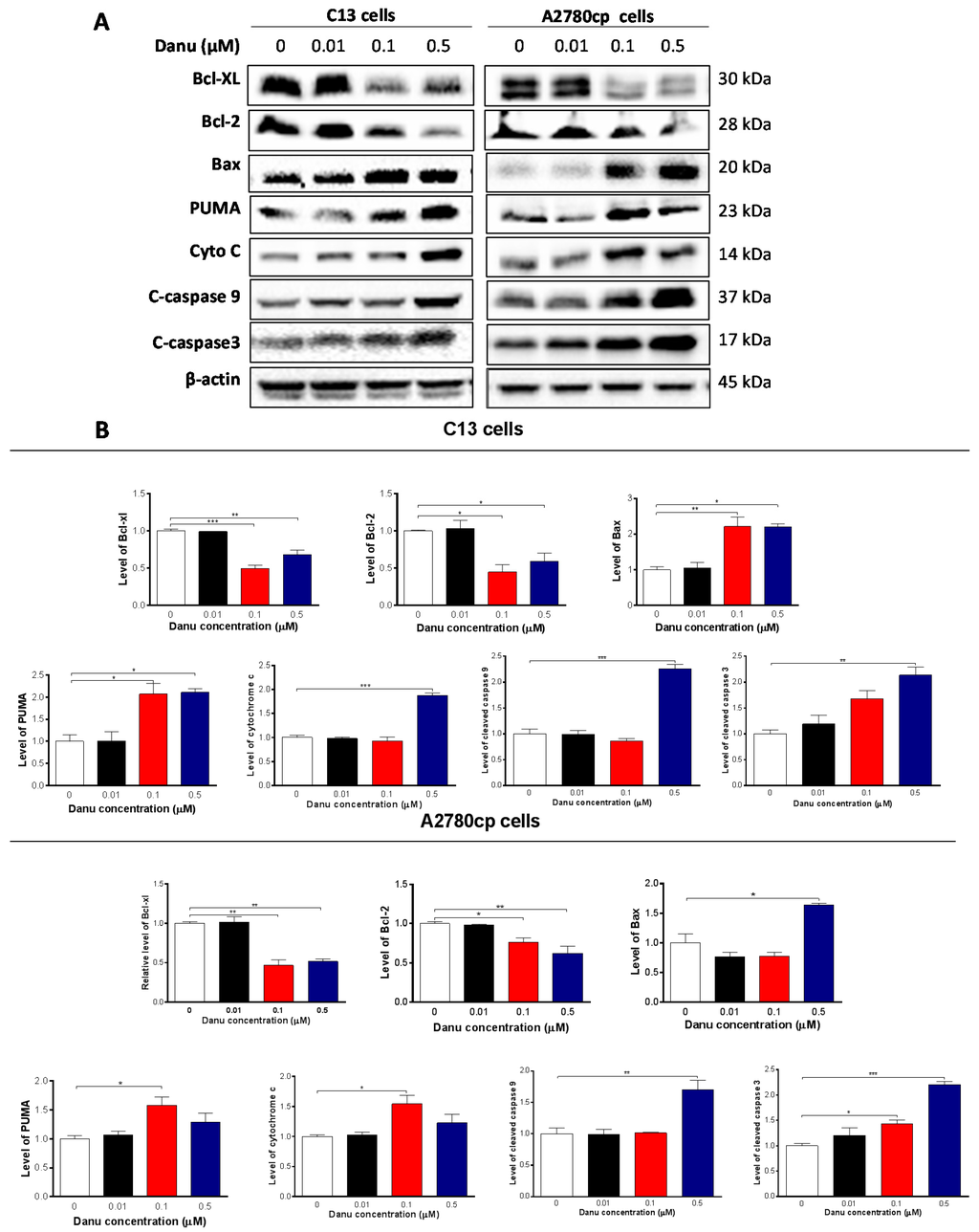 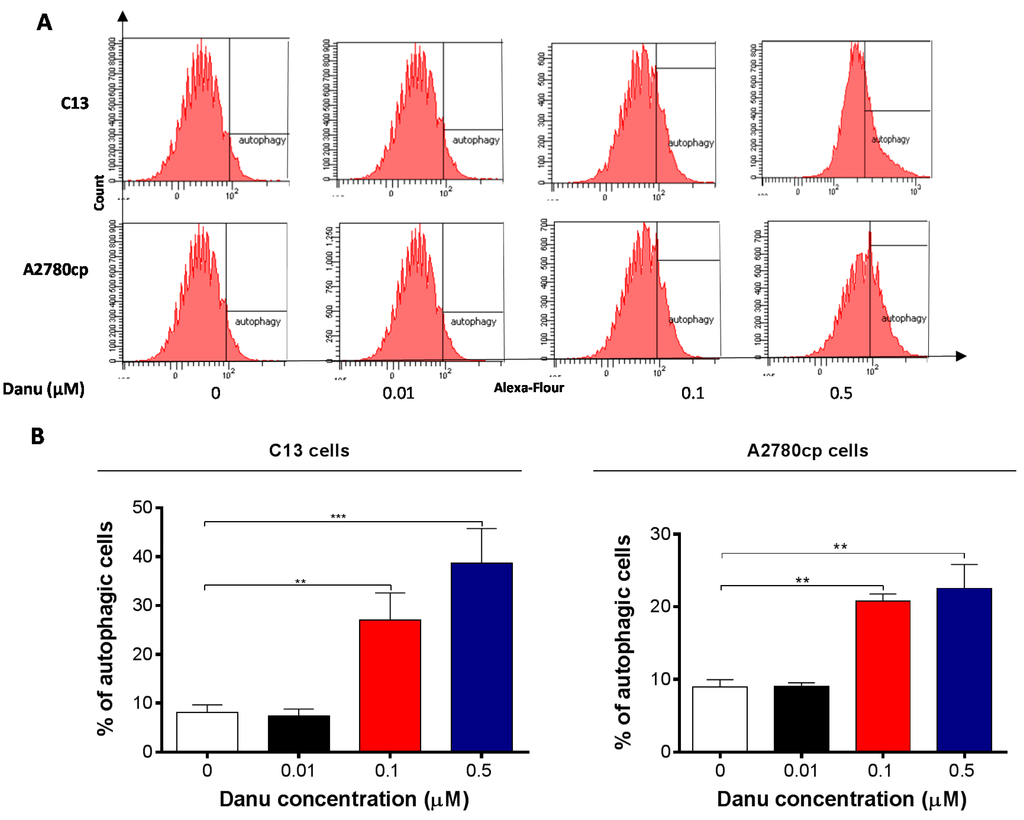 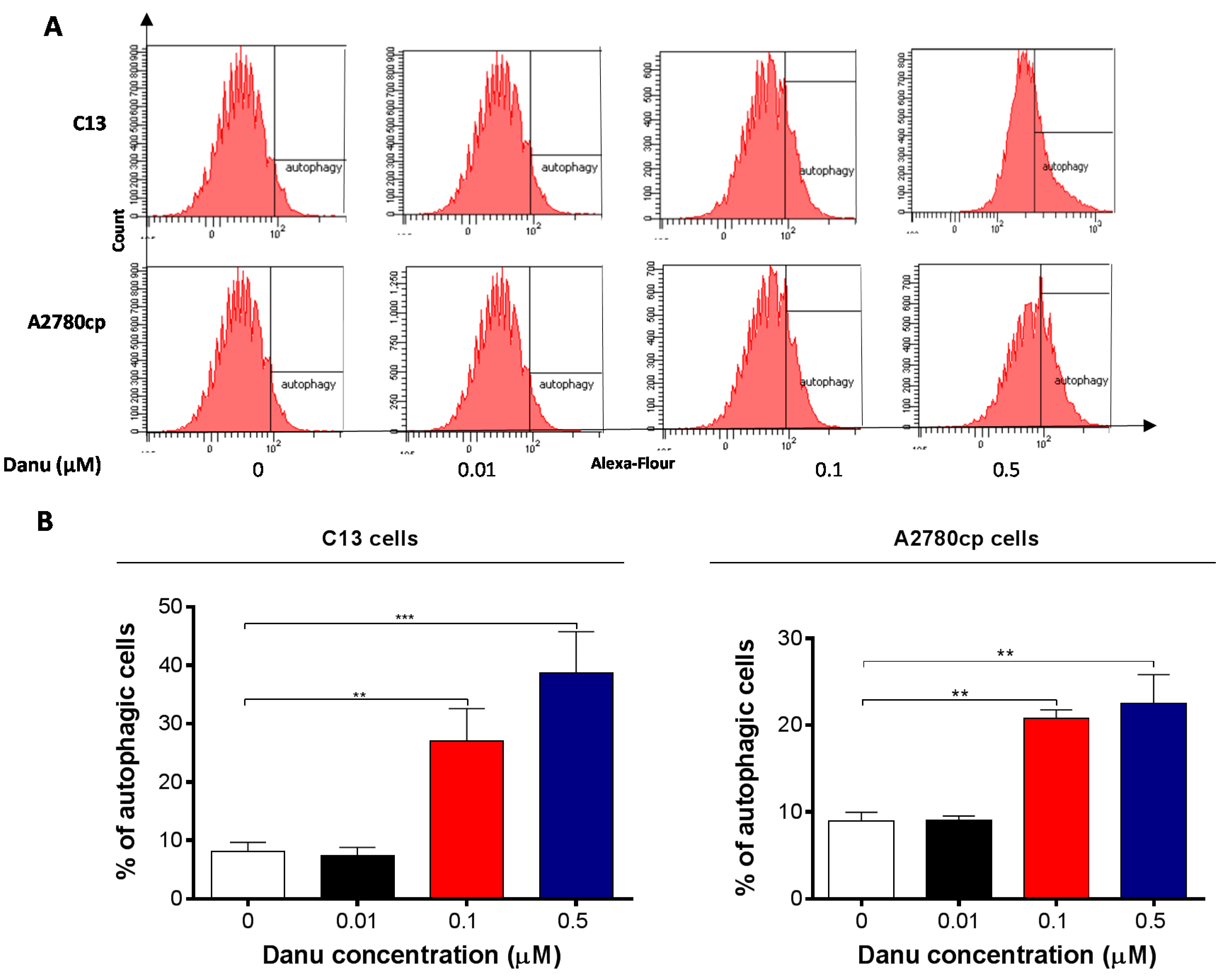 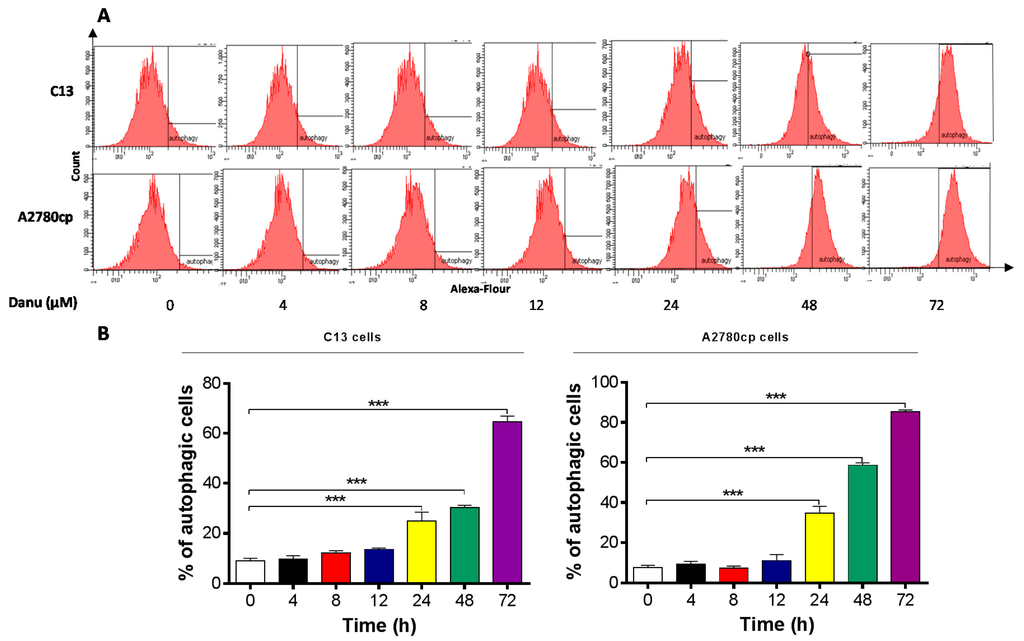 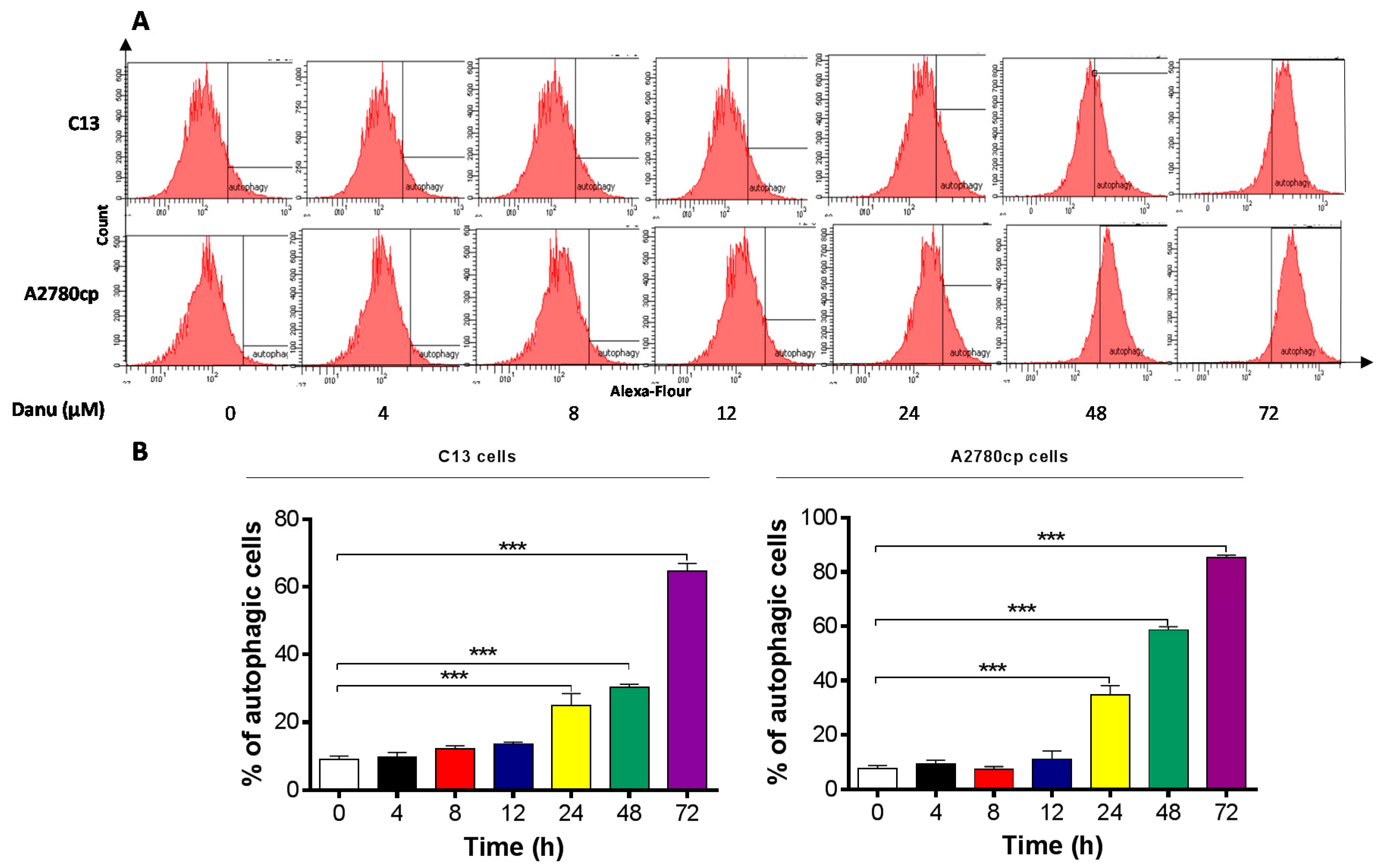 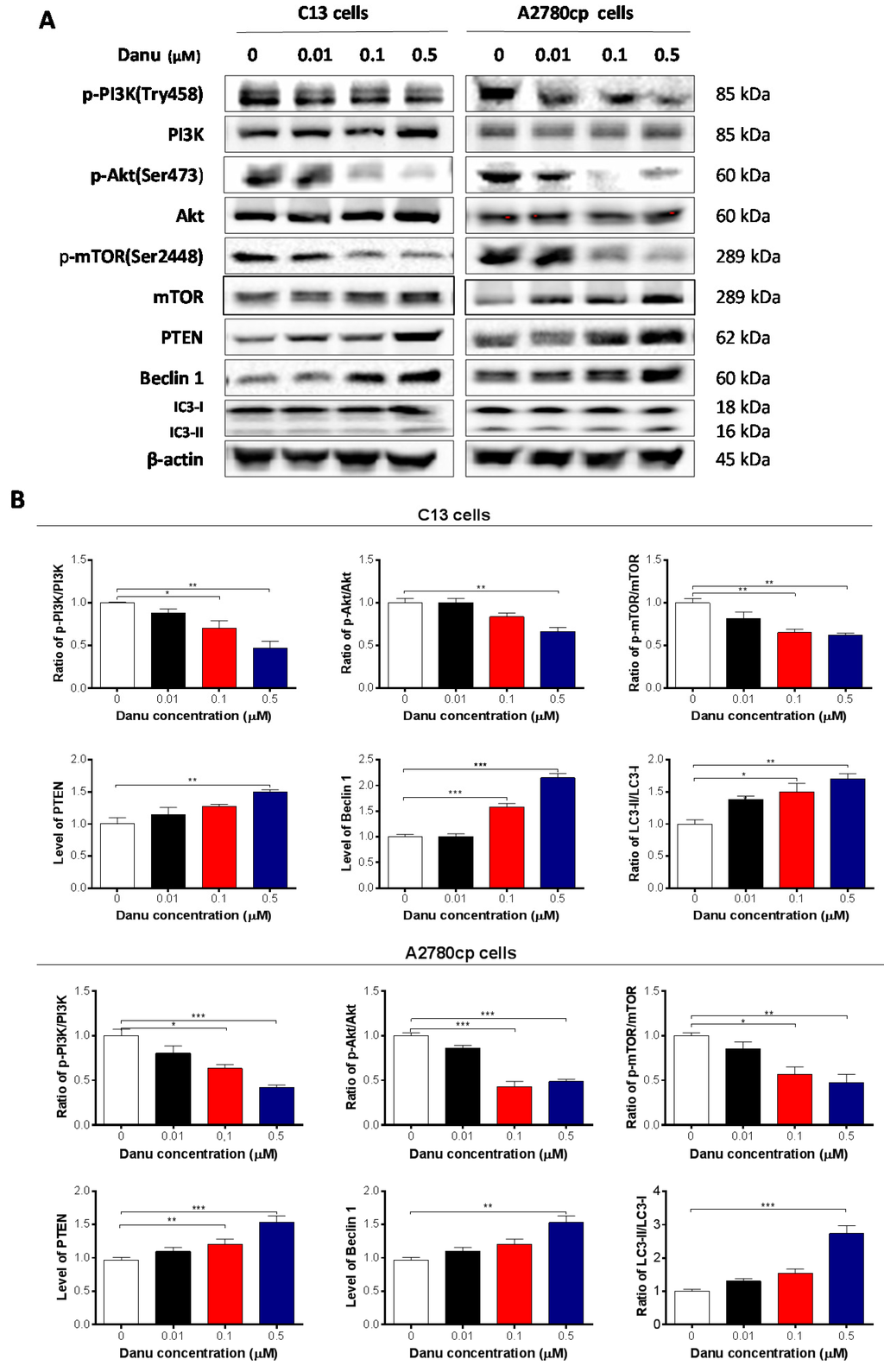 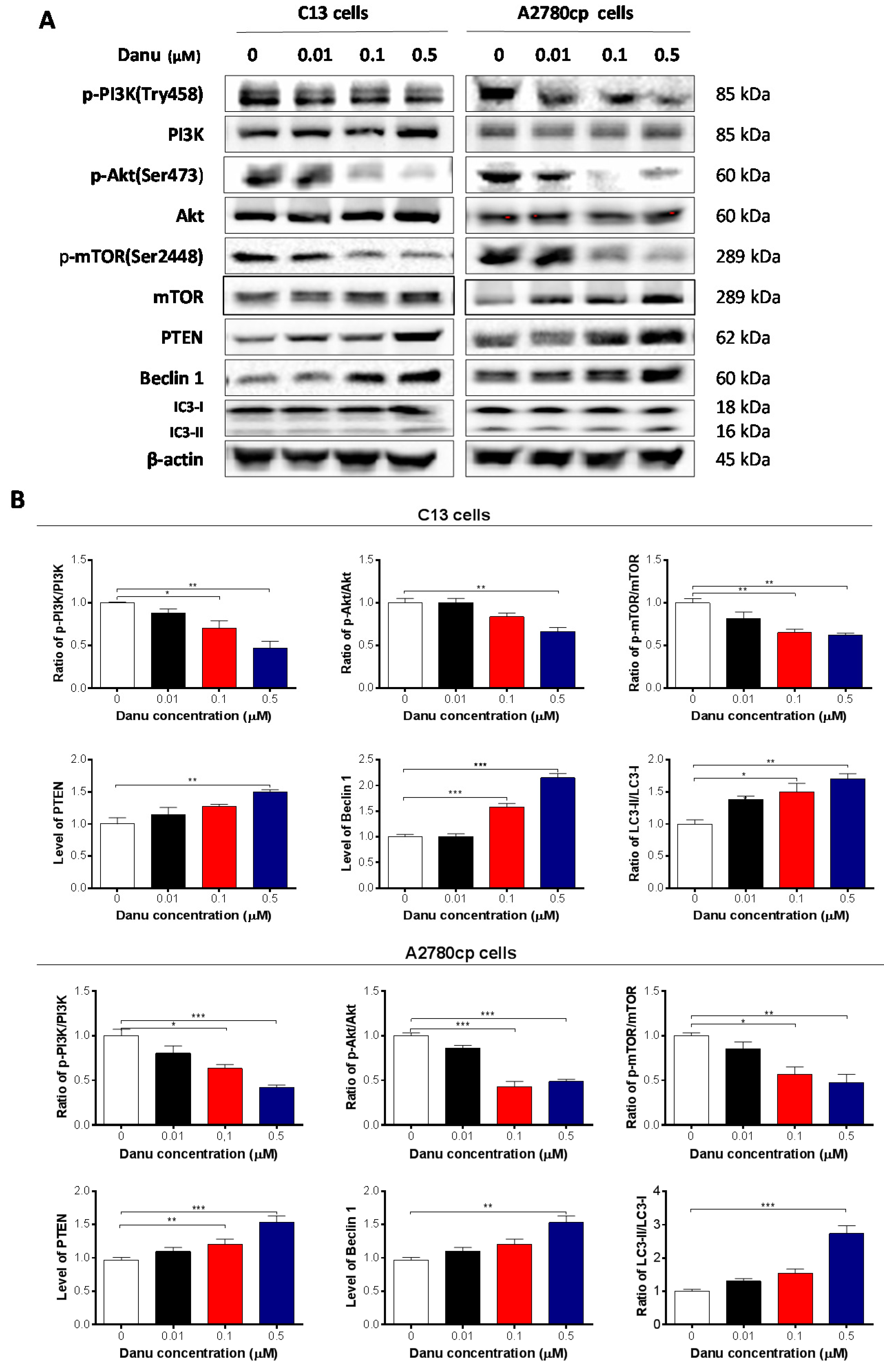 Since we have observed regulatory effect of Danu on PI3K/Akt/mTOR pathway in both C13 and A2780cp cells, we then employed specific chemical inhibitors (MK-2206, an inhibitor of Akt and rapamycin, an inhibitor of mTOR) to further validate the role of this signaling pathway in Danu-induced autophagy. As shown in Figure 12A,B, MK-2206 (1 μM) or rapamycin (10 μM) markedly induced autophagy in C13 and A2780cp cells; compared to the control, incubation of cells with MK2206 and rapamycin increased 2.8- and 8.2-fold in the autophagy of C13 cells and 3.6- and 5.1-fold in the autophagy of A2780cp cells, respectively (p < 0.001, Figure 12A,B). Notably, co-incubation of MK-2206 (1 μM) or rapamycin (10 μM) with Danu enhanced Danu-induced autophagy (Figure 12). Compared to Danu treated cells, co-treatment of C13 cells with Danu and MK2206 or rapamycin increased 1.2- and 3.3-fold in autophagy cells, respectively (p < 0.001, Figure 12A,B). In A2780cp cells, co-incubation cells with Danu and MK2206 or rapamycin led to a 1.9- and 2.8-fold increase in the autophagic cells compared to Danu treated cells (p < 0.001, Figure 12A,B). Taken together, the results suggest that Danu-induced autophagy may be, at least in part, ascribed to the regulation of PI3K/Akt/mTOR signaling pathway. 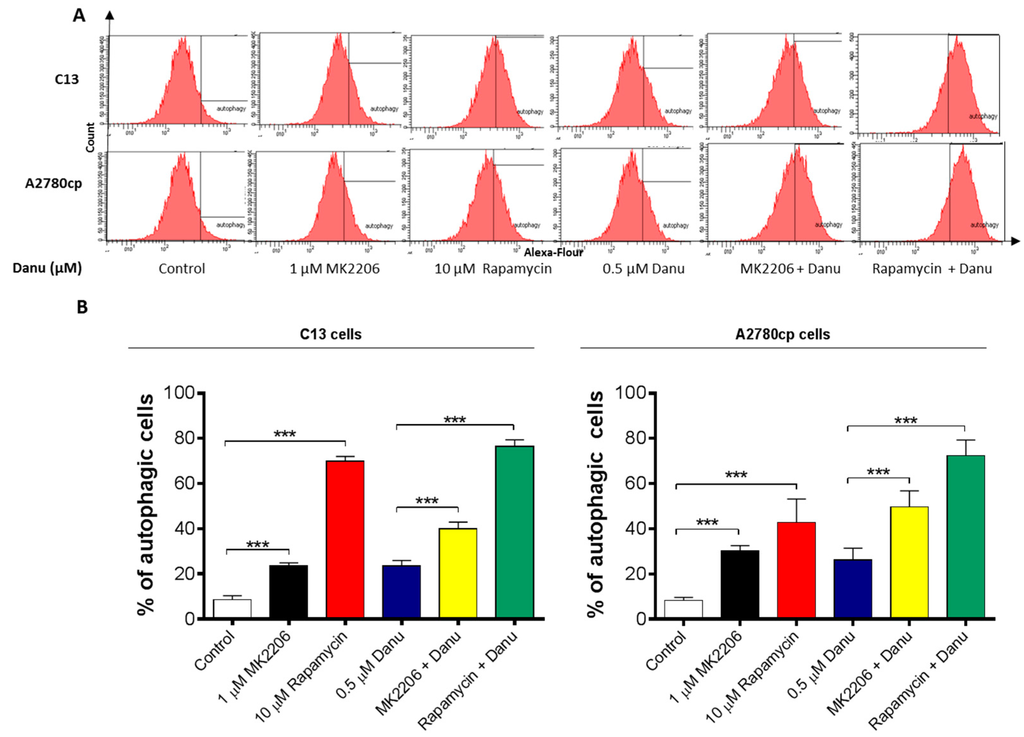 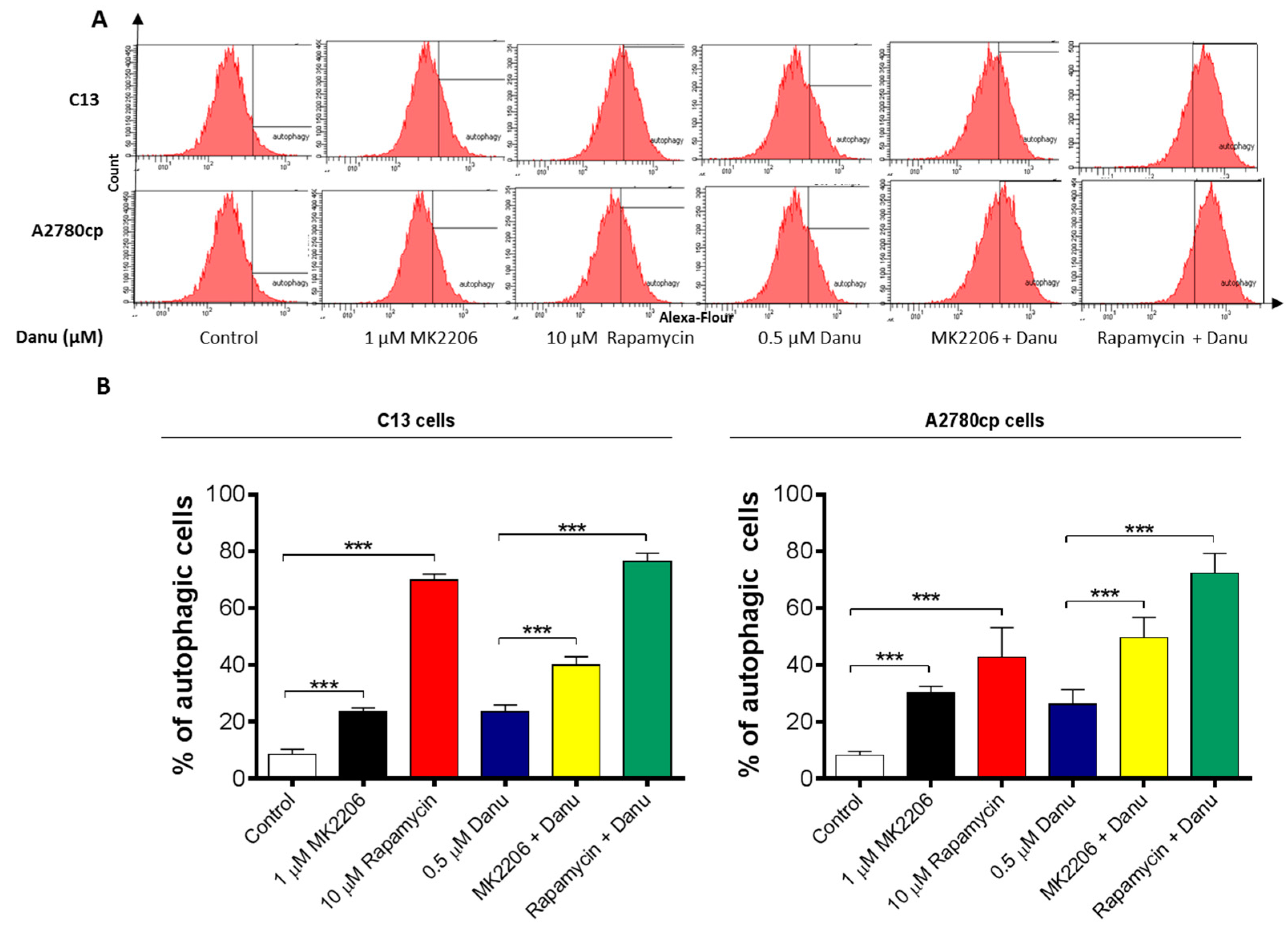 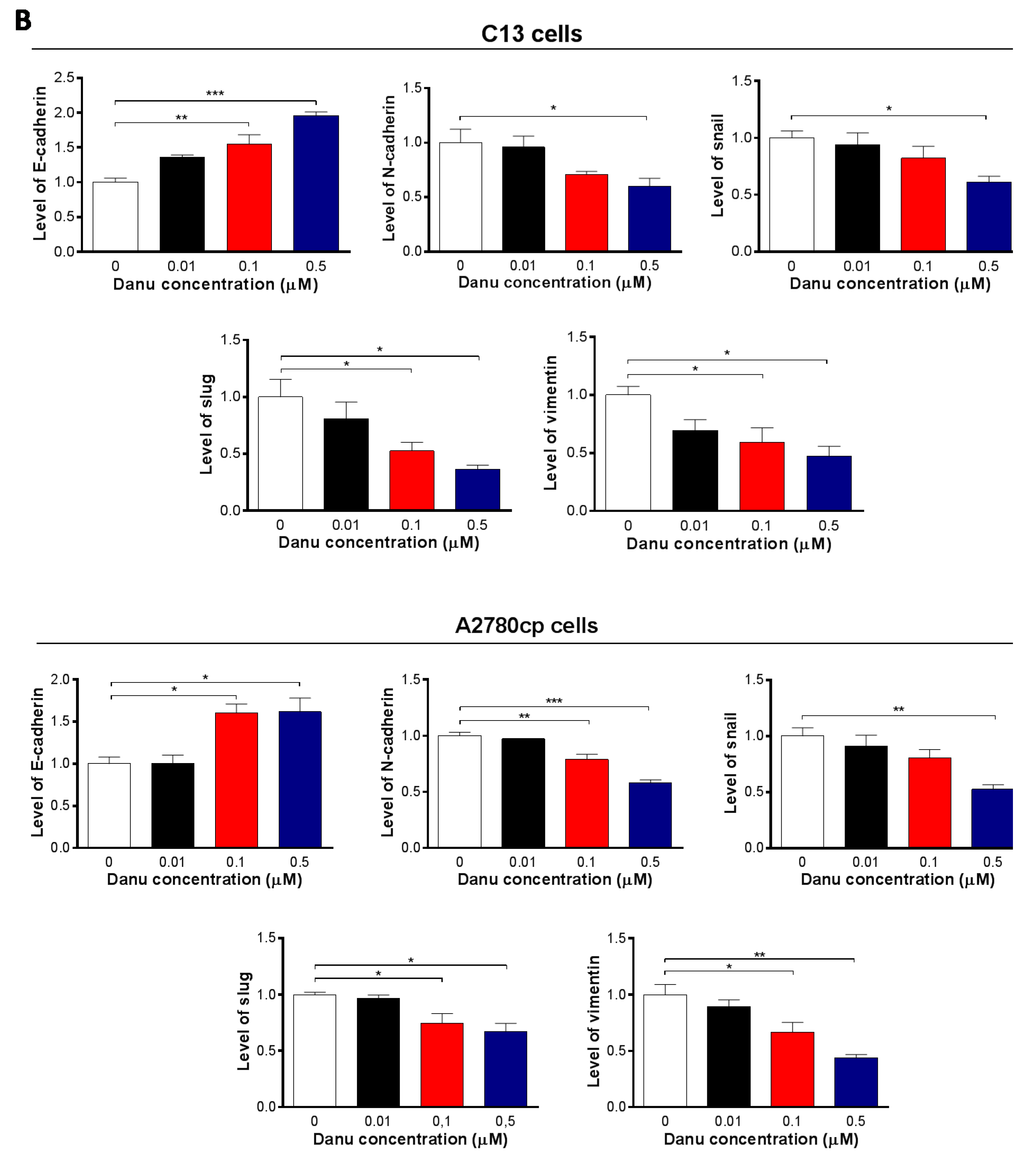 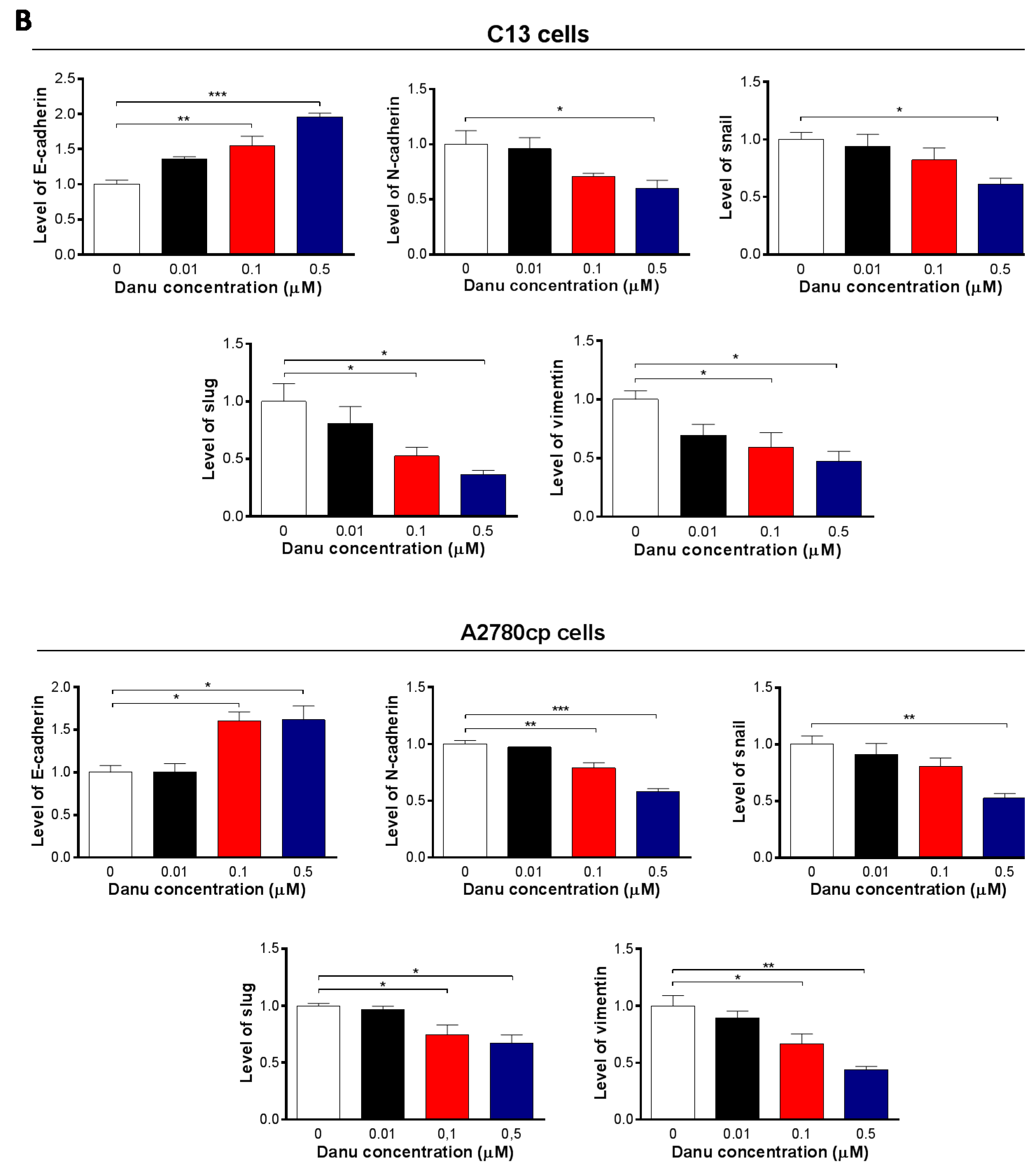 C13 and A2780cp cells are human EOC cell lines that were obtained from Chengxiong Xu (Moffitt Cancer Center & Research Institute, Tampa, FL, USA) and were cultured in DMEM media. These two cell lines are epithelial ovarian cancer cell lines and belong to high-grade serous carcinoma. They exhibit similar biological behavior regarding the characteristics of aggressiveness, invasiveness, and metastasis. All media containing l-glutamine, phenol red, l-cysteine and l-methionine, sodium bicarbonate were supplemented with 10% heat-inactivated FBS. The cells were maintained at 37 °C in a 5% CO2/95% air humidified incubator. Danu was dissolved in DMSO with a stock concentration of 50 mM, and was freshly diluted to the desired concentrations with culture medium. The final concentration of DMSO was at 0.05% (v/v).

The MTT assay was performed to examine the effect of Danu on the viability of C13 and A2780cp cells. Briefly, cells were seeded in 96-well culture plates at a density of 8 × l03 cells/well. After cells were attached, the cells were treated with Danu at different concentrations (0.01–50 μM). The control cells received the vehicle only. After 24-h incubation, 10 μL MTT (5 g/L) was added to each well and cultured for another 4 h. Then, the media was carefully aspirated and 100 μL DMSO was added. The absorbance at the 450 nm wavelength was measured with a Synergy H4 Hybrid microplate reader (BioTek Inc., Winooski, VT, USA). The IC50 values were determined using the relative viability over Danu concentration curve using GraphPad Prism 6.0 (GraphPad Software, Inc., La Jolla, CA, USA).

The effect of Danu on cell cycle distribution was determined by flow cytometry. Briefly, C13 and A2780cp cells were treated with Danu at different concentrations of 0.01, 0.1, and 0.5 μM for 24 h. In separate experiments, C13 and A2780cp cells were treated with 0.5 μM Danu for 4, 8, 12, 24, 48, or 72 h. Cells were suspended, washed by PBS, centrifuged, and fixed in 70% ethanol at −20 °C overnight. Then, the cells were resuspended in 1 mL of PBS containing 1 mg/mL RNase A and 50 μg/mL PI. Cells were incubated in the dark for 30 min at room temperature. A total number of 2 × 104 cells was subject to cell cycle analysis using a flow cytometer (Becton Dickinson Immunocytometry Systems, San Jose, CA, USA).

To examine the effect of Danu on autophagy in C13 and A2780cp cells, cellular autophagy was detected using flow cytometry. Briefly, C13 and A2780cp cells were seeded in 60 mm Petri dishes for 24 h and the cells reached ~75% confluence, then treated with fresh medium alone, control vehicle alone (0.05% DMSO, v/v), or Danu (0.01, 0.1, and 0.5 µM) for 24 h. In separate experiments, C13 and A2780cp cells were treated with 0.5 μM Danu for 4, 8, 12, 24, 48, or 72 h. Following the Danu treatment, cells were resuspended in 250 μL of phenol red-free culture medium containing 5% FBS and 250 μL of the diluted Cyto-ID® Green stain solution was added to each sample and mixed well. Cells were incubated for 30 min at 37 °C in the dark and then collected by centrifugation at 250× g for 3 min. The cell pellet was washed with 1× assay buffer in the Cyto-ID® autophagy detection kit and resuspended in 500 μL fresh 1× assay buffer. Cells were analyzed using the green (FL1) channel of the flow cytometer.

The effect of Danu on cellular autophagy was further examined using confocal microscopy with the application of Cyto-ID® autophagy detection kit according to the manufacture’s instruction. The C13 and A2780cp cells were seeded into 8-well chamber slide at 30% confluence. After incubation overnight, the cells were treated with Danu at 0.01, 0.1, and 0.5 μM. After incubation for 24 h, the cells reached ~60% of confluence and were washed with 1×assay buffer, following by incubation with 100 μL of microscopy dual detection reagent for 30 min at 37 °C in the dark. After incubation, the cells were washed with 1× assay buffer to remove the detection reagent, and then examined using a TCS SP2 laser scanning confocal microscope (Leica, Wetzlar, Germany) using a standard fluorescein isothiocyanate filter set for imaging the autophagic signal at wavelengths of 405/488 nm.