Vitamin D: Link between Osteoporosis, Obesity, and Diabetes?
Next Article in Special Issue

Aldo-keto reductase family 1, member B10 (AKR1B10), a cancer-related oxidoreductase, is expressed in well-differentiated hepatocellular carcinomas (HCCs). However, AKR1B10 levels are minimal in normal liver tissues (NLs), similar to the 70-kilodalton heat shock protein (HSP70) and glypican-3. Moreover, the role of AKR1B10 in chronic hepatitis or cirrhosis, which are considered preneoplastic conditions for HCC, has not been fully elucidated. The aim of this study was to evaluate the expression of AKR1B10, HSP70, and glypican-3 in 61 HCC tissue samples compared to corresponding non-tumorous liver tissues (NTs), comprising 42 chronic hepatitis and 19 cirrhosis cases to clarify the significance of molecular changes at the preneoplastic stages of HCC. Immunohistochemical analysis demonstrated that the median expression levels of AKR1B10 were higher in HCCs than in NTs (p < 0.001) and higher in NTs than NLs (p < 0.001) with 54.8%, 2.1%, and 0.3% expression in HCCs, NTs, and NLs, respectively. HSP70 and glypican-3 were expressed in HCCs, but minimally in NTs and NLs with no significant difference between expression in NTs and NLs. Furthermore, a multivariate analysis identified an association between hepatic steatosis and AKR1B10 expression in NTs (p = 0.020). Of the three protein expressed in well-differentiated HCCs, only AKR1B10 was upregulated in preneoplastic conditions, and a steatosis-related factor might influence its expression.
Keywords: AKR1B10; HSP70; glypican-3; hepatocellular carcinoma; chronic hepatitis; cirrhosis AKR1B10; HSP70; glypican-3; hepatocellular carcinoma; chronic hepatitis; cirrhosis

Hepatocellular carcinoma (HCC) is the fifth most common cancer and the third most common cause of cancer-related death worldwide [1]. HCC is characterized by a multistep morphological developmental process, progressing from early, well-differentiated HCC to moderately or poorly differentiated, advanced HCC [2]. Until now, several molecular alterations have been found to be associated with morphological developments in HCC. The 70-kilodalton heat shock protein (HSP70) and glypican-3 (GPC3) are upregulated even in early, well-differentiated HCC [3,4], while accumulations of mutated beta-catenin and p53 are mainly observed in moderately to poorly differentiated HCC [5,6]. On the other hand, the majority of HCCs arise in chronically diseased livers, including livers with chronic hepatitis and cirrhosis resulting from hepatitis B or C infection or exposure to other carcinogenic factors. These chronic liver diseases are widely considered to be preneoplastic conditions for HCC, potentially leading to molecular alterations that predispose hepatocytes to malignant transformation. However, the molecular alterations underlying preneoplastic conditions that predispose to HCC remain poorly understood.
Aldo-keto reductase family 1 member B10 (AKR1B10) is a member of the AKR superfamily, which are NAD(P)H-dependent oxidoreductases that catalyze the reduction of carbonyl compounds and various physiological and xenobiotic substrates [7,8]. AKR1B10 was originally isolated as a gene with increased expression in human HCC [9,10], including well-differentiated HCC, but is minimal in normal liver tissue [11,12]. This is similar to findings regarding the expression of HSP70 and GPC3. Recently, we analyzed the expression profiles of approximately 41,000 genes in patients with chronic hepatitis C and found that AKR1B10 was upregulated in the livers of chronic hepatitis C patients at high risk of HCC [13]. These observations suggest that an alteration of AKR1B10 expression occurs even in preneoplastic conditions that predispose to HCC. To further study the significance of AKR1B10 alterations in the early stages of hepatocarcinogenesis, we evaluated AKR1B10 expression in 61 HCCs and corresponding non-tumorous liver tissues (NTs), which comprised 42 chronic hepatitis and 19 cirrhosis cases, and compared AKR1B10 expression with the expression of the other two molecules known to be upregulated in well-differentiated HCC—HSP70 and GPC3—both of which are widely used as immunohistochemical molecular markers of early HCC [14]. In addition, because a strong association has been reported between smoking and AKR1B10 expression in malignant and non-malignant lung airway epithelium [15–17] and several studies have identified smoking as a risk factor for HCC development [18,19], we further evaluated the correlation of AKR1B10 expression with NT-associated factors, including patients’ smoking history.

Table 1 summarizes demographic, biochemical, and pathological data for all 61 patients enrolled in this study. Serological markers of hepatitis virus were distributed as follows: positive for HBsAg, n = 13 (21%); positive for anti-HCV (hepatitis C virus), n = 33 (54%); and negative for HBsAg and anti-HCV, n = 15 (25%). The median HCC size was 48 mm (range: 12–170 mm), and 19 HCCs were classified as well differentiated, 38 were moderately differentiated, and 4 were poorly differentiated. The distribution of the degree of hepatic fibrosis in NTs was as follows: no fibrosis or periportal fibrous expansion (F0–1), n = 18; portal fibrous widening with bridging fibrosis (F2), n = 14; bridging fibrosis with lobular distortion (F3), n = 10; and liver cirrhosis (F4), n = 19. Steatosis in NTs ranged between 0.0% and 23.3% (median 1.3%).

In the present study, we demonstrated that AKR1B10 expression levels were significantly higher in livers with chronic hepatitis or cirrhosis, which are preneoplastic conditions underlying HCC, than in normal livers, and that AKR1B10 expression was still higher in HCCs. Because the AKR superfamily consists of more than 100 members, and several AKR members, such as AKR1B15, show high amino acid sequence identity with AKR1B10, cross-reactivity of the anti-AKR1B10 antibody used in this study may become an issue in immunohistochemical analysis. However, both our previous study and another study performed quantitative reverse transcription polymerase chain reaction for AKR1B10, and both reported results consistent with AKR1B10 immunohistochemistry [13,20]. HSP70 and GPC3 also showed prominent immunoreactivities in HCC, but minimal immunoreactivities in NTs and NLs, consistent with previous reports [3,4]. These results indicate that HSP70 and GPC3, but not AKR1B10, are useful markers for distinguishing HCC from chronic hepatitis or cirrhosis. However, the stepwise upregulation of AKR1B10 from chronic hepatitis or cirrhosis to HCC might indicate its potential role in the early stage of hepatocarcinogenesis.
Many studies have demonstrated AKR1B10 upregulation in several types of cancer, including several recent reports on HCC [11,20–22]. AKR1B10 was shown to have a high catalytic efficiency for the reduction of all trans-, 9-cis-, and 13-cis-retinals to their corresponding retinols in vitro and in vivo [23,24], and the conversion of retinals to retinols via AKR1B10 can deprive retinoic acid receptors of their ligands, and can presumably inhibit the retinoic acid signaling pathway [25,26]. Retinoic acid is thought to be essential for the maintenance of normal epithelial differentiation. Retinoic acid depletion causes cell proliferation and loss of differentiation, thereby inducing neoplastic phenotypes in normal epithelium [27–29]. On the other hand, retinoic acid exposure inhibits proliferation of normal and transformed cells in vitro [30,31], and dietary retinoic acid reduced the development of premalignant and malignant lesions in a chemically induced mouse carcinogenesis model [32]. AKR1B10 was shown to be downregulated using small, interfering, RNA-inhibited cancer cell proliferation both in vitro and in vivo [22,33]. Furthermore, oral administration of acyclic retinoids was reported to prevent human HCC [34]. These observations suggest the involvement of AKR1B10 in cancer cell dedifferentiation and proliferation via inhibition of retinoic acid signals. In addition to its hypothetical role in retinoid metabolism, AKR1B10 has been reported to perform other potential functions such as detoxification of toxic aldehydes, fatty acid synthesis, and resistance to carbonyl-containing drugs [15]. These functions may also be involved in the molecular mechanisms underlying carcinogenesis. Consistent with our findings, several reports demonstrated AKR1B10 upregulation in some preneoplastic conditions such as squamous metaplasia and Barrett’s esophagus [15,16,35].
Although several studies have reported that smoking affects AKR1B10 expression in malignant and non-malignant lung airway epithelium [15–17], no association between AKR1B10 expression in the liver and smoking was demonstrated in this study. Interestingly, the present study showed a significant association between AKR1B10 expression in NTs and hepatic steatosis: a cytological change marked by clear vacuoles because of fat accumulation in hepatocytes. Recently, we conducted a study demonstrating that AKR1B10 upregulation was a risk factor for HCC development in chronic hepatitis C patients [13]. Hepatic steatosis per se has been considered a risk factor for HCC development. Presence of hepatic steatosis is associated with increased frequency of HCC in patients with HCV-related cirrhosis [36]. Alcoholic and non-alcoholic steatohepatitis is recognized as an important liver disease preceding cirrhosis and HCC [37,38]. Taken together, all of these findings suggest that AKR1B10 might play a role in the molecular basis of steatosis-related hepatocarcinogenesis. Indeed, Starmann et al. reported that AKR1B10 expression was upregulated during the progression of simple steatosis to steatohepatitis with increased risk of HCC [39]. The present study showed that AKR1B10 expression in NTs was not significantly different according to hepatitis B or C viral infection status. Interestingly, of the 15 NT liver samples in this study that were negative for hepatitis B surface antigen (HBsAg) and anti-hepatitis C virus antibody (anti-HCV), 9 showed histological features of steatohepatitis. In addition, AKR1B10 expression tended to be higher in HBsAg- and anti-HCV-negative NT samples, compared to HBsAg- or anti-HCV-positive NT samples, although the difference was not statistically significant. These results partially confirm the results reported by Starmann et al. Because hepatic steatosis is generally associated with metabolic disorders such as obesity and type 2 diabetes, some metabolic disorders might affect AKR1B10 expression in preneoplastic conditions [40].

We found that AKR1B10 expression is upregulated in chronic hepatitis or cirrhosis, preneoplastic conditions that predispose to HCC, in association with hepatic steatosis. Our findings could provide insight into the molecular mechanism of the very early stages of human hepatocarcinogenesis and a novel therapeutic target for the prevention of HCC.

This study was supported by a Health Labor Sciences Research Grant, Research on Measures for Intractable Diseases, from the Ministry of Health, Labor, and Welfare of Japan. 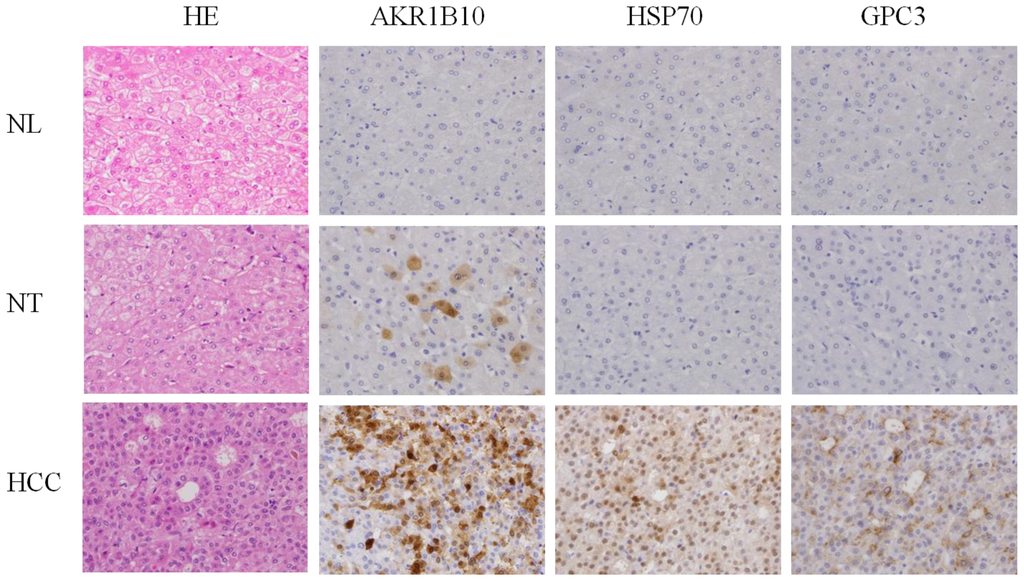 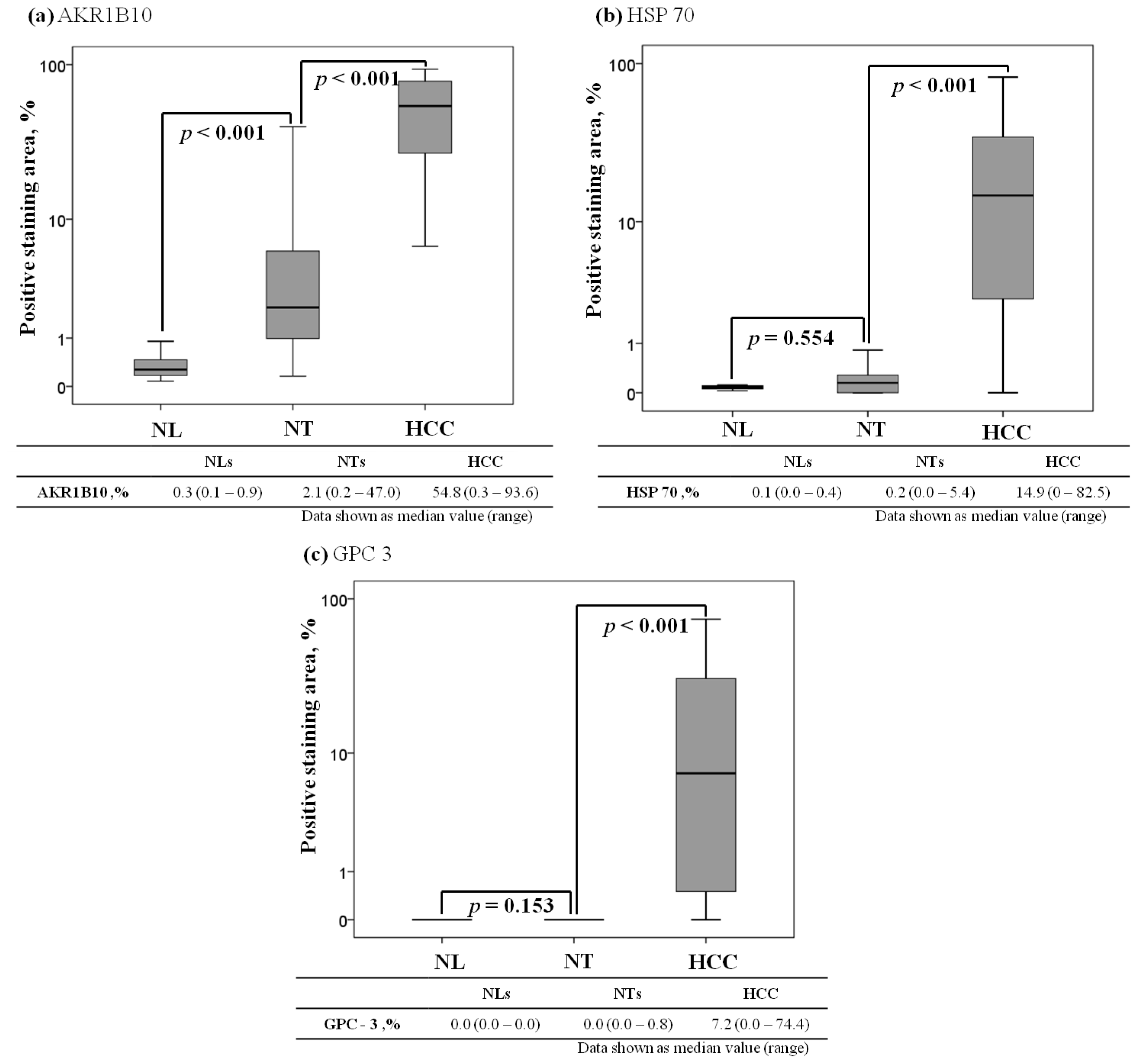 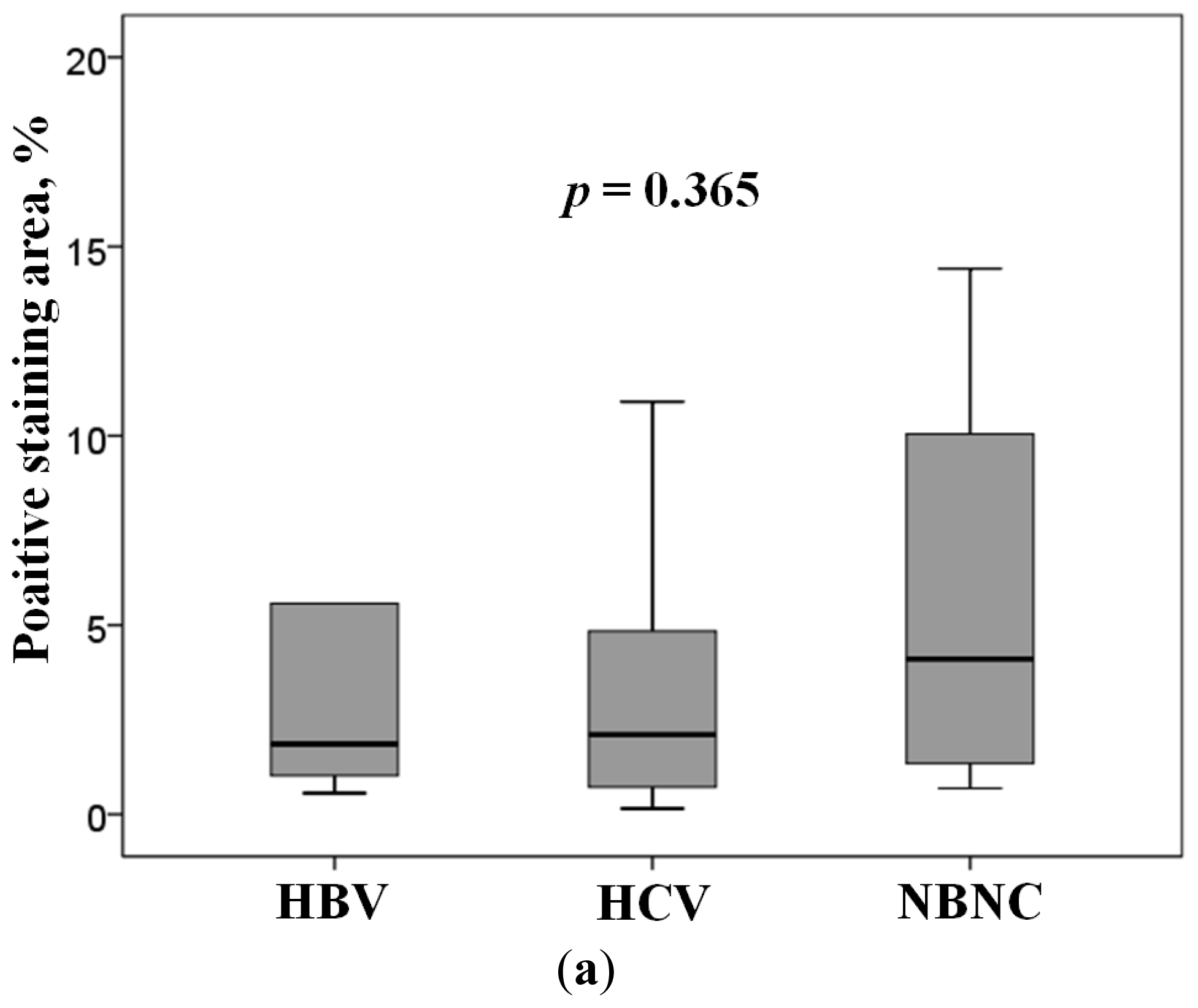 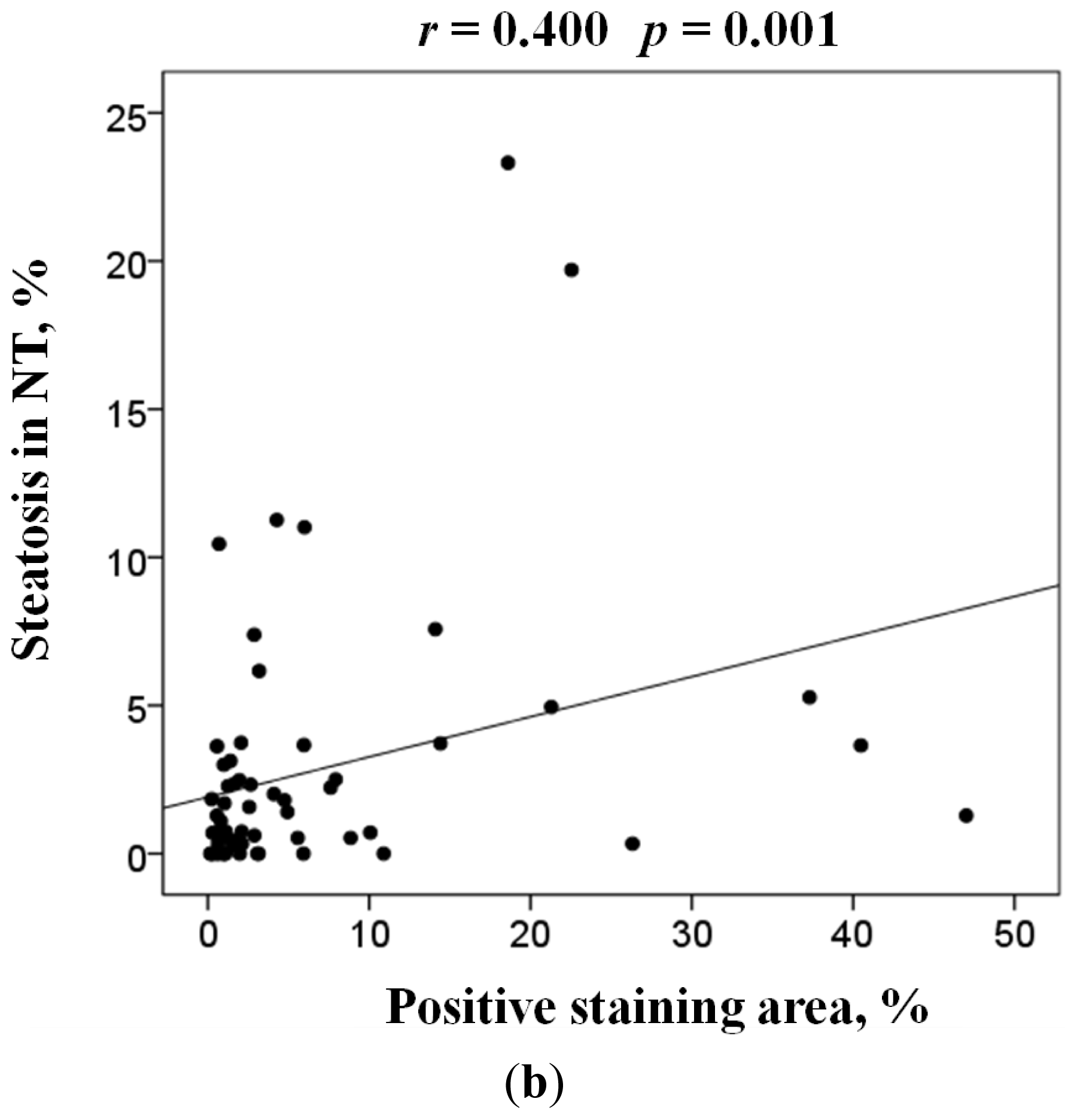 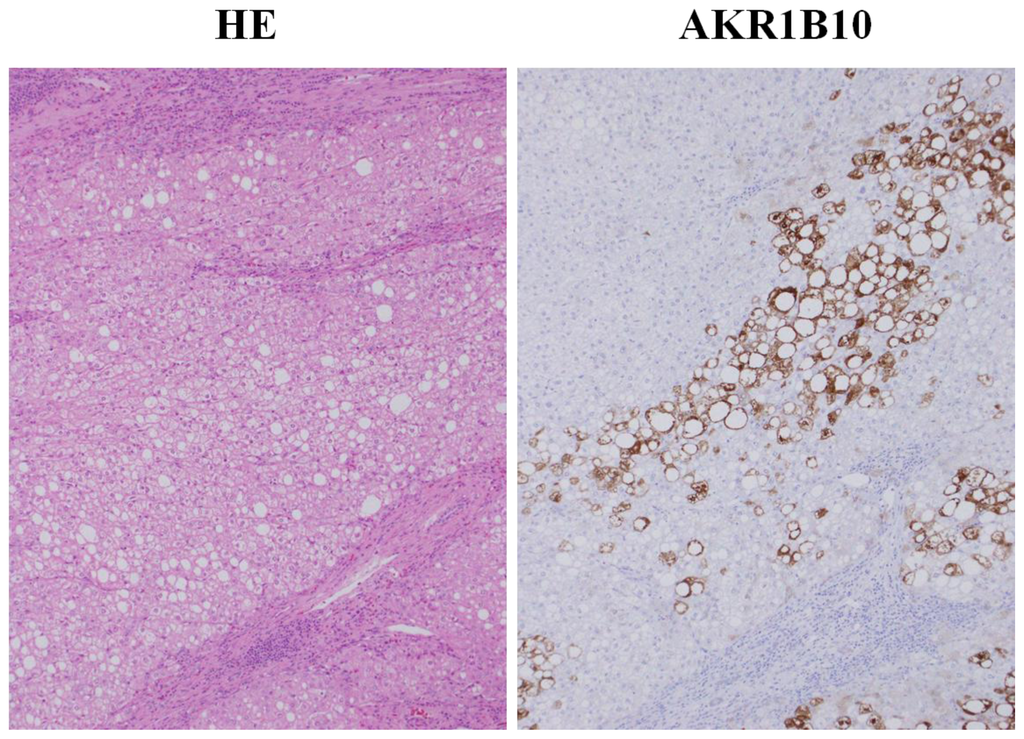