:
Previous results on nitric oxide (NO) metabolism after traumatic brain injury (TBI) show variations in NO availability and controversial effects of exogenous nitric oxide synthase (NOS)-inhibitors. Furthermore, elevated levels of the endogenous NOS inhibitor asymmetric dimethylarginine (ADMA) were reported in cerebro-spinal fluid (CSF) after traumatic subarachnoid hemorrhage (SAH). Therefore, we examined whether ADMA and the enzymes involved in NO- and ADMA-metabolism are expressed in brain tissue after TBI and if time-dependent changes occur. TBI was induced by controlled cortical impact injury (CCII) and neurological performance was monitored. Expression of NOS, ADMA, dimethylarginine dimethylaminohydrolases (DDAH) and protein-arginine methyltransferase 1 (PRMT1) was determined by immunostaining in different brain regions and at various time-points after CCII. ADMA and PRMT1 expression decreased in all animals after TBI compared to the control group, while DDAH1 and DDAH2 expression increased in comparison to controls. Furthermore, perilesionally ADMA is positively correlated with neuroscore performance, while DDAH1 and DDAH2 are negatively correlated. ADMA and its metabolizing enzymes show significant temporal changes after TBI and may be new targets in TBI treatment.
Keywords:
asymmetric dimethylarginine; nitric oxide synthase; dimethylarginine dimethylaminohydrolases; protein-arginine methyltransferases; acute traumatic brain injury; controlled cortical impact

Traumatic brain injury (TBI) triggers a cascade of changes inducing the development of secondary brain damage with nitric oxide (NO) playing an important role. NO is a strong vasodilator and regulates cerebrovascular tone and perfusion [1]. Therefore, it is not surprising that NO is one of the key players in the development of cerebral vasospasm after traumatic and aneurysmal subarachnoid hemorrhage (SAH) as well as in the development of secondary brain damage after severe TBI [2,3].
NO is synthesized from l-arginine by a family of NO-synthases (NOS): Two constitutive forms (cNOS) have been described, the endothelial NOS (eNOS) and the neuronal NOS (nNOS), as well as an inducible form (iNOS) [4]. The synthesis of NO via NOS can be inhibited by the endogenous competitive NOS-inhibitor asymmetric methylated l-arginine (ADMA), which is synthesized by protein-arginine methyltransferase 1 (PRMT1) and hydrolyzed by dimethylarginine dimethylaminohydrolase (DDAH1 and DDAH2) [5,6]. After TBI, an early decrease in intracerebral NO concentration occurs, which lasts from 30 min up to 6 h after TBI [2]. During this time, eNOS and nNOS activity appear normal and unchanged after TBI in humans [7]. The administration of exogenous NOS inhibitors leads to controversial effects [2,8–10]. Furthermore, administration of l-arginine resulted in reduced contusion volumes and had beneficial effects on cerebral blood flow [11–15]. Martens-Lobenhoffer et al. hinted at the endogenous NOS-inhibitor ADMA after TBI. They described an increase of ADMA levels in the cerebro-spinal fluid of patients with traumatic subarachnoid hemorrhage [16] parallel to the time-course of blood-brain barrier breakdown after TBI [17]. Variations in NO availability and controversial effects of exogenously administered NOS-inhibitors after TBI may be evoked by the competitive endogenous NOS inhibitor ADMA.
We, therefore, hypothesized that ADMA and the enzymes involved in ADMA-metabolism might be involved in TBI. Therefore, our goals were (1) to determine whether ADMA is expressed in brain tissue after TBI, focusing on the damaged brain site (TBI lesion) and the potentially influenceable penumbra (perilesional zone); (2) to establish whether time-dependent changes of ADMA expression exist; and (3) to investigate if the expression of enzymes involved in NO- and ADMA-synthesis might also be affected.

Motor function performance after controlled cortical impact injury (CCII) is known to drop immediately after injury. In previous studies using a CCII rat model the impairment of motor function was found to be maximal during the first two days after injury [18–20]. We examined Garcia neuroscore performance [21] of control animals (n = 5) and of TBI animals at different time-points after CCII (n = 6; at each time point). Due to the experimental set-up no neurological testing could be performed within 30 min after CCII. All control animals reached the maximum attainable score of 18 points (100% level). In accordance with previous reports [18–20] we find a significant (p < 0.01) and immediate drop of 33% in performance over the first 2 days after TBI (13 ± 2 Garcia points; n = 24) compared to controls (18 Garcia points, n = 5).

Male Sprague-Dawley rats (n = 35) (Charles River, Germany) weighing 260 to 370 g were used in the present investigation. All experimental procedures were reviewed by the institutional committee for animal care and approved by the local veterinary authority (Regierungspräsidium Karlsruhe, Germany, G147/09).

Rats were anaesthetized in an isoflurane chamber (5%). Thereafter, anesthesia was maintained with a face mask using 1.5%–1.8% isoflurane, 30% O2, and 68% N2O. Via a catheter in the tail artery systemic blood pressure and blood gases were monitored. Body temperature was kept constant at 37.0 °C by a feedback controlled heating pad. After induction of anesthesia, the head was fixed in a stereotactic frame and a right-sided craniotomy was performed between the coronal, sagittal and lambdoid sutures with a micro-drill and under permanent cooling with saline. Specific attention was paid to leave the dura mater intact. Controlled cortical impact injury (CCII) was performed perpendicular to the surface of the brain as previously described [45]. The diameter of the impactor was 5 mm, the velocity 7.5 m/s, 1.5 mm depth of impression and the impact duration 300 ms. Craniotomy was closed immediately after CCII by replacing the bone-flap and fixation with dental cement.

After perfusion animal supratentorial brains intended for immunohistochemical staining were dissected out of the skull and snap frozen in 2-methylbutan (AppliChem, Darmstadt, Germany) and stored at −80°C for prompt cryosectioning. For immunostaining of different antibodies adjacent sections of 6 μm were used. On one object slide 2 brain sections with a minimum distance of 48 μm were mounted and both were stained with one of the following antibodies: Rabbit polyclonal antibody against endothelial NOS (eNOS), the inducible NOS (iNOS), ADMA and PRMT1 as well as goat polyclonal antibody against DDAH1 and DDAH2 were used with a 1:50 dilution for eNOS, iNOS, PRMT1, DDAH1 and DDAH2 (Abcam, Cambridge, UK). The antibody against ADMA was diluted 1:100. Sections without primary antibodies were used as negative controls in each staining set. Binding was visualized by a biotin conjugated secondary donkey immunoglobulin G antibody versus rabbit/goat immunoglobulin G antibody (Abcam, Cambridge, UK), adding Avidin/Biotin-complex (ABC) as well as 3,3′-Diaminobenzidine (DAB) as chromogen. Counterstaining was performed with hematoxylin. Distribution of immunohistologically stained cells within different brain areas (lesion, and perilesional zone) (e.g., Figure 2A) were analyzed at different time-points following CCII. In control animals the corresponding homotopic regions below the craniectomy were examined. As no difference could be found for any antibody staining among the different control regions their results were combined. Immunohistochemical staining was analyzed quantitatively by two independent observers who were blinded to the previous treatment protocols of animals: In two sections and in six fields of view (FOV) at a high-power magnification of 400×, the number of positively stained cells was counted and a mean value was calculated for each group and for the different brain areas at different time points (30 min, 3, 8, 24 and 48 h) following CCII. Furthermore, a ratio between expression of NO synthases and the NOS inhibitor ADMA was calculated as an indirect measure for NO availability, called in the following “NOS/ADMA ratio”: (eNOS + iNOS expression)/ADMA expression. For interobserver agreement, κ-statistics were performed, revealing excellent agreement (κ = 0.95).

The neurological examination was performed referring to the modified grading system by Garcia et al. [21]. The Garcia test is a composite neurological test in which the rats are evaluated for various sensorimotor deficits: (1) spontaneous activity; (2) symmetry in four limb movement; (3) forepaw outstretching; (4) climbing; (5) body proprioception; and (6) response to vibrissal touch. For each mode of motor or behavioral deficit between 0 and 3 points were allocated, leading to a cumulative maximum score of 18 points as found in normal, healthy animals. Neurological deficits lead to lower scores (Figure 3) [21]. Garcia neuroscore performance was tested in all control animals (n = 5). TBI animals were examined before they were sacrificed at 3, 8, 24 and 48 h after CCII (n = 24; 6 animals at each time point). Due to the experimental set-up no neurological testing could be performed within 30 min after CCII (n = 6).

This is, to the best of our knowledge, the first study that describes temporal profiles of NOS, ADMA, PRMT1, DDAH1 and DDAH2 in the brain after experimental contusion/TBI. The main findings of our experiments are: (1) ADMA is expressed in brain sections of animals after suffering TBI as well as in controls; (2) TBI changes ADMA expression strongly: ADMA expression decreased in all time-groups after TBI compared to the control group. However, within the lesion ADMA expression drops immediately and stays low, while the level in the perilesional area decreases 3 h after TBI and increases 24 h after TBI compared to previous time-groups, but remains at all times lower than in controls; (3) PRMT1 also decreased in all animals after TBI compared to the control group, while; (4) DDAH1, and DDAH2 increased in comparison to controls; (5) In the perilesional area ADMA is positively correlated with neuroscore performance; and (6) DDAH1 and DDAH2 are negatively correlated with neuroscore performance.
Although, ADMA and the enzymes involved in ADMA-metabolism show significant changes after TBI, future experiments have to prove if the competitive endogenous NOS inhibitor ADMA effects variations in NO availability and previously described controversial effects of exogenously administered NOS-inhibitors after TBI. Nevertheless, ADMA and its metabolizing enzymes might be new targets in TBI treatment.

This work was supported by a stipend of the German society of neurological surgeons (Stipendium Neurochirurgische Forschung der Deutschen Gesellschaft für Neurochirurgie (DGNC)) awarded to C.S. Jung. We thank Rolf Warta for technical assistance in performing photography of immunostaining. 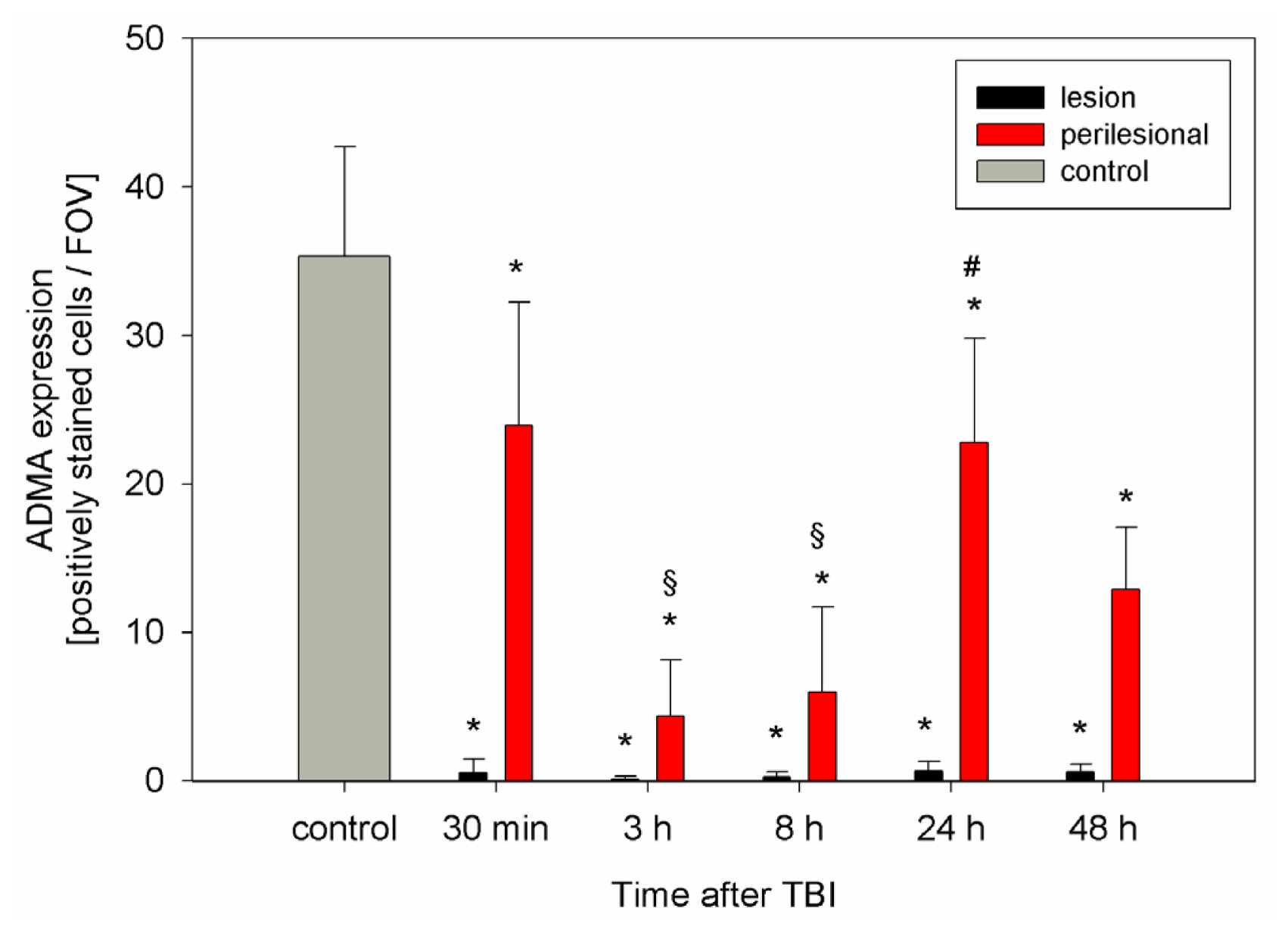 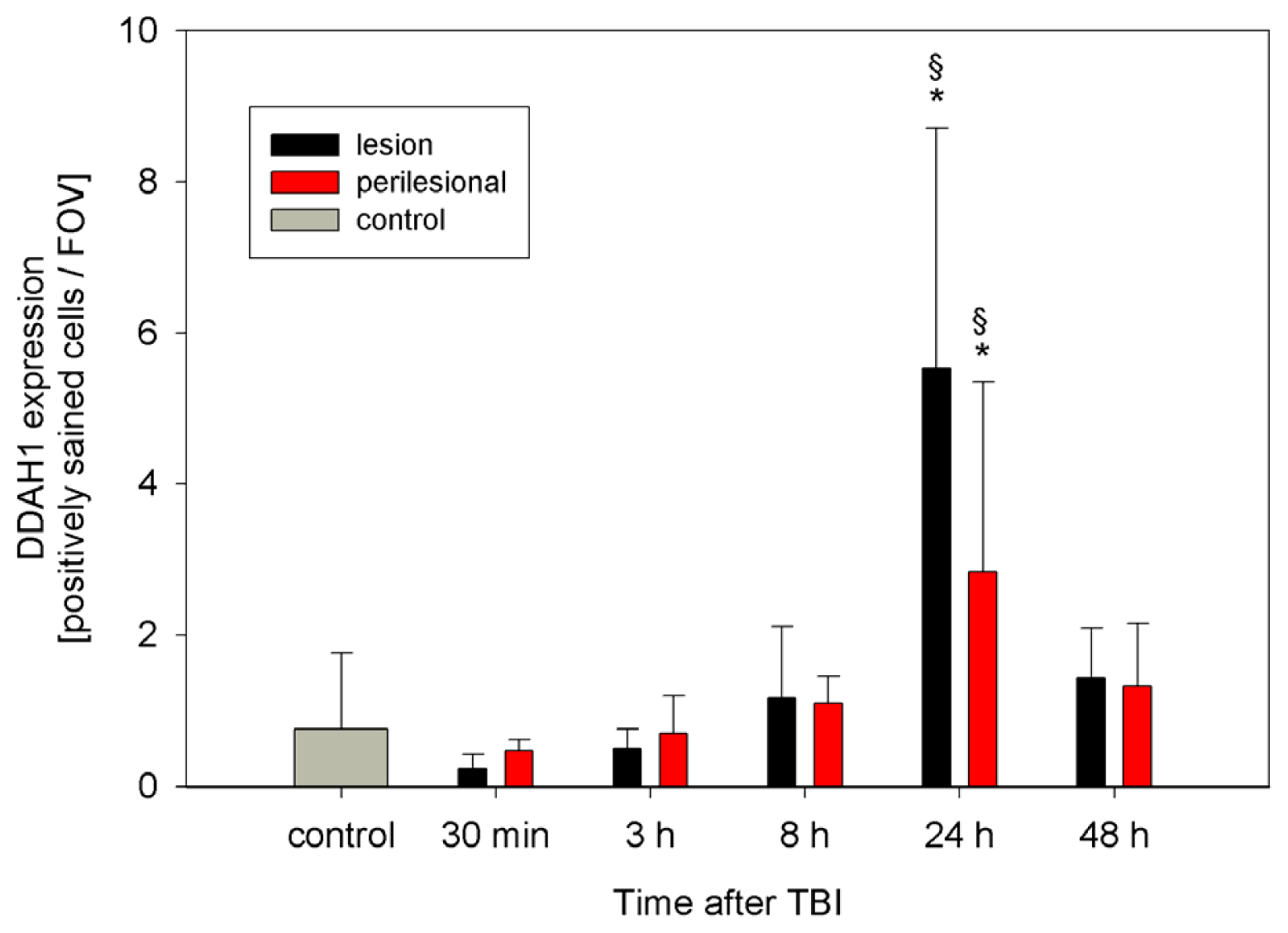 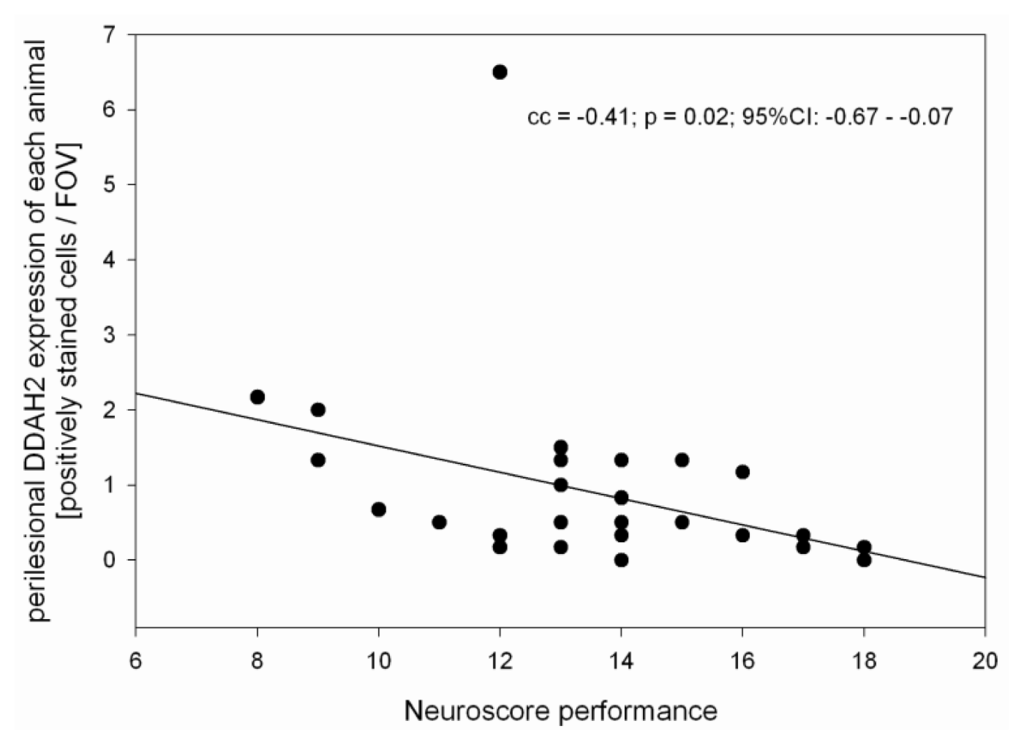 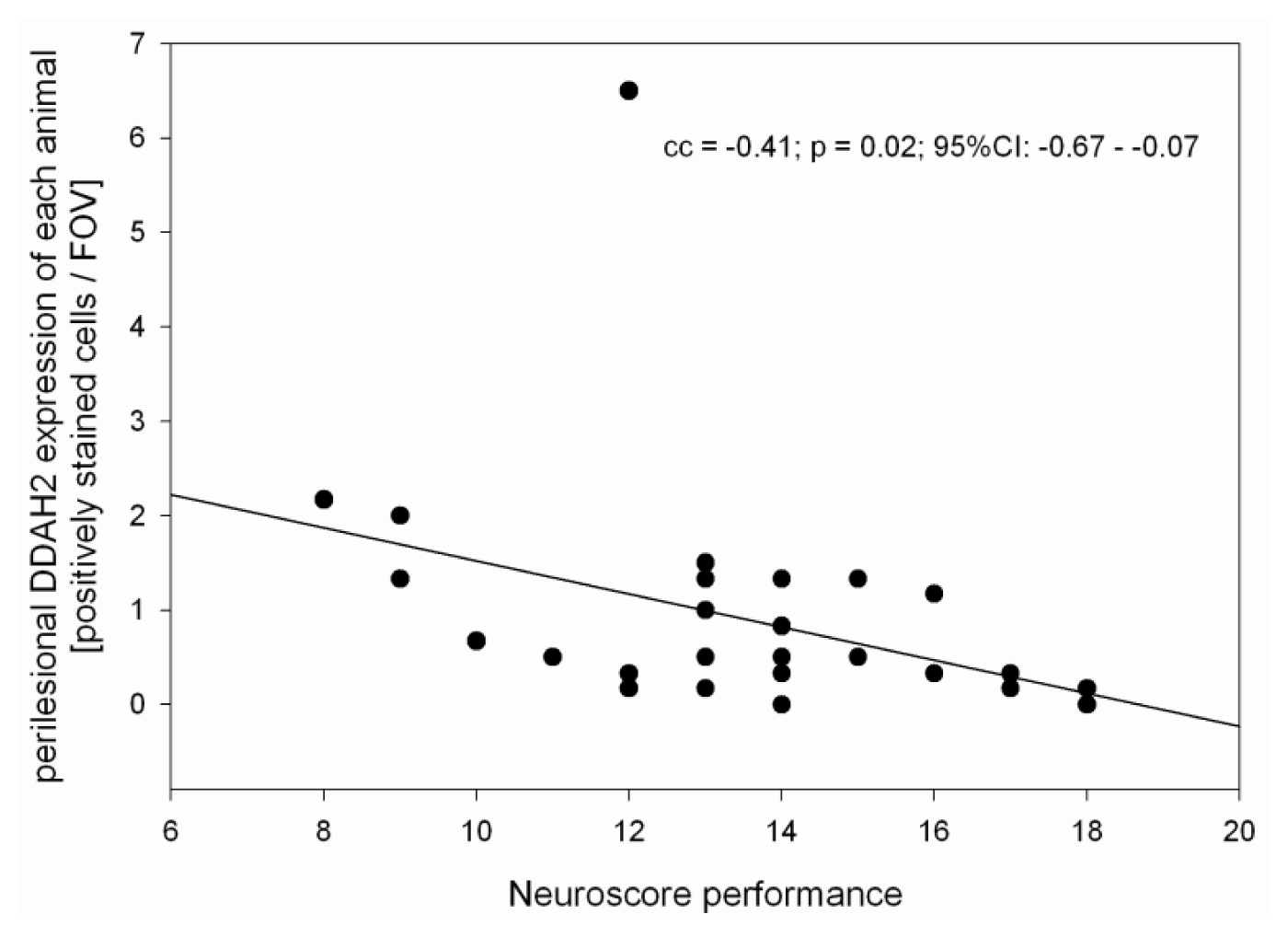