Embryo implantation is a highly synchronized bioprocess between an activated blastocyst and a receptive uterus. In mice, successful implantation relies on the dynamic interplay of estrogen and progesterone; however, the key mediators downstream of these hormones that act on blastocyst competency and endometrium receptivity acquisition are largely unknown. In this study, we showed that the expression of osteopontin (OPN) in mouse blastocysts is regulated by ovarian estrogen and uterine micro-environment. OPN mRNA is up-regulated in mouse blastocyst on day 4 of pregnancy, which is associated with ovarian estrogen secretion peak. Hormone treatment in vivo demonstrated that OPN expression in a blastocyst is regulated by estrogen through an estrogen receptor (ER). Our results of the delayed and activated implantation model showed that OPN expression is induced after estrogen injection. While estrogen treatment during embryo culture in vitro showed less effect on OPN expression, the tubal ligation model on day 3 of pregnancy confirmed that the regulation of estrogen on OPN expression in blastocyst might, through some specific cytokines, have existed in a uterine micro-environment. Collectively, our study presents that estrogen regulates OPN expression and it may play an important role during embryo implantation by activating blastocyst competence and facilitating the endometrium acceptable for active blastocyst.
Keywords: implantation; estrogen; uterus; blastocyst; osteopontin implantation; estrogen; uterus; blastocyst; osteopontin

In mammals, embryo implantation occurs in a limited time known as the window of implantation, specifically, the time after ovulation and the full formation of the corpus luteum [1]. The maternal hormones from ovaries, including estrogen and progesterone are known as the principle hormones in this process [2]. According to the respective secretion level during the menstrual cycle or estrous cycle, it is widely believed that progesterone is essential for embryo implantation in almost all the mammals studied. The estrogen secreted during proliferative phase is mainly responsible for endometrial epithelium proliferation, whereas the function of estrogen secreted in the luteal phase was species-specific [3,4]. In species including monkey, rabbit and hamster, progesterone alone is sufficient for implantation, while it remains indistinct whether implantation requires ovarian estrogen in humans and primates [5,6]. In mice, the secretion of progesterone is stimulated by mating behavior and the formation of corpora luteum, and gradually increases during the progress of pregnancy, while the ovarian estrogen has two secreted peaks at the proestrous phase and pre-implantation phase on day 4 of pregnancy (day of vaginal plug as day 1). The delayed implantation model could be induced by ovariectomy on the morning of day 4 before the estrogen secretion peak, the embryo will enter into a quiescent state which could be maintained for few days under the condition of continuing progesterone treatment. Subsequently, if estrogen is appended, embryo implantation could be activated 24–48 h after progesterone priming [7]. In contrast, embryo implantation will occur appropriately if the ovariectomy is performed after the estrogen secretion peak [8]. Such a delayed-activated implantation model demonstrated that pre-implantation estrogen mainly interacts with its receptor α (ERα) and directs successful implantation in a progesterone primed endometrium. ERα expression peaks on day 5 of pregnancy suggest that ERα might regulate implantation [9]. Additionally, the finding that ER protein was localized in mouse blastocyst during implantation [10] indicates that estrogen may directly regulate the gene expression in blastocyst via binding to ERα.
In mammals, embryo implantation begins with apposition, attachment and adhesion between uterine luminal epithelium (LE) and conceptus trophoblast. Several studies have identified that blastocyst adhesion to and invasion into uterine endometrium require the existence of extra cellular matrix (ECM) which including fibronectin and OPN [11,12]. OPN, a member of ECM protein family, contains a Gly-Asp-Ser (RGD) sequence that binds to cell surface integrins to promote cell-cell attachment and cell spreading [13]. OPN protein is expressed at a high level in uterine epithelium during mid-secretory phase, decidual tissues and invading cytotrophoblst in humans [14,15], and the OPN/integrin αvβ3 complex has been identified as a marker of distinguishing receptive from non-receptive endometrium in clinical practice [16]. The study in pigs and sheep illustrated that the complexes of OPN and integrin subunits were constitutively expressed on trophectoderm and at the apical surface of uterine LE and uterine glandular epithelium (GE) during early pregnancy, to induce adhesion between LE and trophoblast and stimulate the cytoskeletal reorganization [17,18]. In mice, OPN mRNA was localized in uterine GE on day 4 and luminal epithelium on day 5 of pregnancy [19], as well as the immune cells surrounding the decidual cells during early pregnancy [20]. It is suggested that OPN plays an important role in mouse pregnancy, for the OPN-deficient mice display decreased pregnancy rate during mid-gestation without any abnormality in embryo number, suggesting peri-implantation pregnancy loss, and OPN expression in LE may provides a connection for conceptus to LE [21]. Chaen’s group [19] proposed that OPN secreted from uterine endometrial gland on day 4 is involved in adhesion complex assembly and responsible for blastocyst adhesion competence. However, Botquin’s group demonstrated the increase of OPN expression in mouse blastocyst compared to morula using in situ hybridization, in which the OPN mRNA is localized in inner call mass (ICM) on day 4 of pregnancy. However, the specific regulatory mechanism remains unknown [22].
Although it is well known that blastocyst activation and uterine receptivity establishment rely on ovarian estrogen secretion, the specific mechanism and concrete signal pathways by which estrogen facilitates blastocyst activation and adhesion to endometrium remain unknown. Here we demonstrated that OPN expression in mouse blastocyst is regulated by ovarian secreted estrogen together with uterine micro-environment. It is conceivable that estrogen may regulate blastocyst activation, adhesion, and uterine receptivity through up-regulating the mediator of OPN in blastocyst.

Sexually mature mice (Kunming White outbred strain, 6–8 weeks) maintained in a controlled environment (14 h light and 10 h dark cycle). All animal procedures were approved by the Institutional Animal Care and Use Committee of Wuhan University.
Female mice were super-ovulated by an injection of 7.5 IU of PMSG (Lizhu Company, Guangzhou, China) followed by 7.5 IU of hCG (Lizhu Company, Guangzhou, China) 48 h later. After hCG treatment, the mice were mated with fertile males of the same strain to induce normal pregnancy (the day of vaginal plug is the day 1 of pregnancy).
Embryo collection and culture: on days 3 and 4, pregnancy was confirmed by recovering embryos from oviducts or uteri, blastocysts were collected by flushing the uterine horn at the different stage of ovarian estrogen secretion surge (08:00, 12:00 and 20:00 on day 4) and prepared for the following experiments. For in vitro embryo culture, embryos at morula stage were collected by flushing the oviducts with PBS, and cultured in single step medium (Irvine Bio. Inc., Irvine, CA, USA) under mineral oil (Sigma-Aldrich Inc., St. Louis, MO, USA) at 37 °C, 5% CO2 for 24 h to blastocyst stage. For oviducts ligation treatment, mouse oviducts were ligatured by 6–0 silk thread at the joint part of uteri-oviduct under ether anesthesia at 16:00 on day 3 to make the embryos detained in oviducts, then the embryos were collected at 20:00 on day 4.
For steroids treatments, pregnant mice were treated with estradiol-17β (25 ng/mouse, Sigma-Aldrich Inc., St. Louis, MO, USA), 4-OH-E2 (50 ng/mouse, Sigma-Aldrich Inc., St. Louis, MO, USA) and ICI 182,780 (1 mg/mouse, AstraZeneca, London, United Kingdom) at 07:00 on day 4 by s.c. injection, respectively, pregnant mice were accepted sesame oil (Sigma-Aldrich Inc., St. Louis, MO, USA) as negative control. For in vitro embryo culture, estradiol-17β dissolved in ethanol was supplemented in medium, controls received ethanol only. For delayed and activated implantation model, pregnant mice were ovariectomized under ether anesthesia at 08:30–09:00 on day 4 of pregnancy. Delayed implantation was maintained by daily s.c. injection of progesterone (1 mg/mouse, Sigma-Aldrich Inc., St. Louis, MO, USA) on days 5–7. To terminate delayed implantation, progesterone-primed delayed-implantation mice were treated with estradiol-17β (25 ng/mouse, s.c.) on day 7. The blastocysts from delayed and activated mice were collected before or 12 h after estrogen treatment, respectively. For in vivo steroids treatment and model building, each group included five pregnant mice, for normal morula and blastocyst collection, as well as in vitro embryo culture, each group collected at least 100 embryos, and all the experiments will be repeated for three times.

Mouse embryos were collected for total RNAs extraction using mRNA Capture Kit (Boehringer Mannheim, Germany) according to the manufacturer’s recommendations, total mRNA from blastocyst were reverse transcribed into cDNA by RNA PCR Kit (AMV) Ver.3.0 (TaKaRa Bio Inc, Tokyo, Japan).
For real-time PCR, cDNA was amplified using a SYBR Premix Ex Taq kit (TaKaRa Bio Inc, Tokyo, Japan) on the Rotor-Gene 3000A system (Corbett Research, Mortlake, Victoria, Australia). The conditions used for real-time PCR were as follows: 95 °C for 10 s, followed by 45 cycles of 95 °C for 5 s and 60 °C for 34 s. All reactions were run in triplicate. The corresponding primer sequences were used for real-time PCR. Gapdh served as internal control. Primer sequences used in real-time PCR for OPN were 5-CACTCCAATCGTCCCTAC-3 and 5-AGACTCACCGCTCTTCAT-3, for Gapdh were 5-GTTGTCTCCTGCGACTTCA-3 and 5-GGTGGTCCAGGGTTTCTTA-3. Data from real-time PCR were analyzed using the 2−ΔΔCt method. The significance of difference between two groups was assessed by Student’s t-test. The multiple comparison was performed with Tukey’s ANOVA. p < 0.05 was considered statistically significant.

In summary, our studies identified that the expression of OPN in mouse blastocyst is regulated by estrogen, partially through the cytokines or some other pathways existing in the uterine micro-environment. We supposed that OPN expression in blastocysts was, at least, partly involved in blastocyst activation to make them obtain the ability of adhesion and invasion, which is dependent on ovarian secreted estrogen. Although OPN is an estrogen responsiveness gene, the concrete regulation of estrogen on OPN expression is not direct but requires the uterine micro-environment. The possible pathway might be that estrogen activated some cytokines or OPN ligands through combining with its receptor, ERα. Since the OPN is associated with implantation competency of blastocysts, it is better to further study the specific regulatory mechanism on OPN expression. 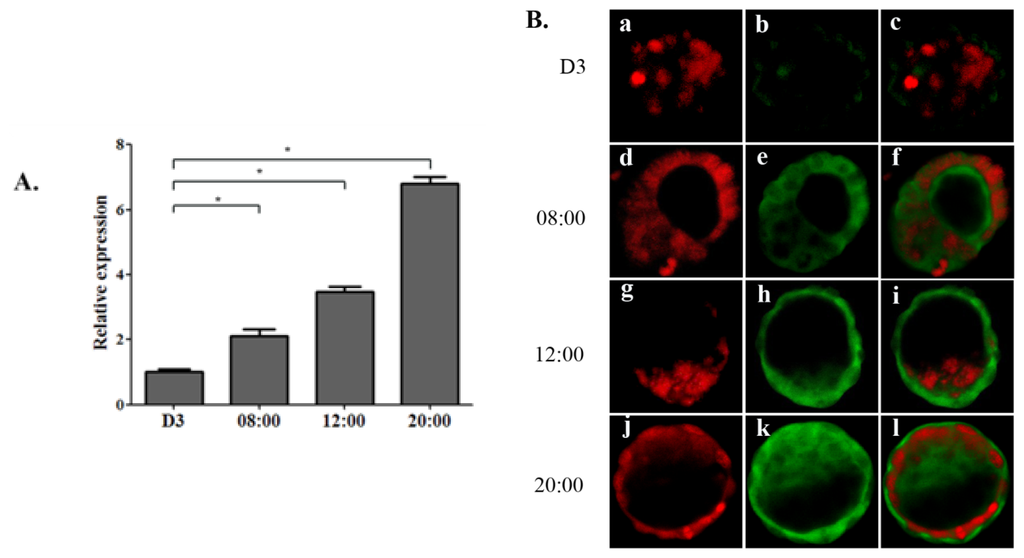 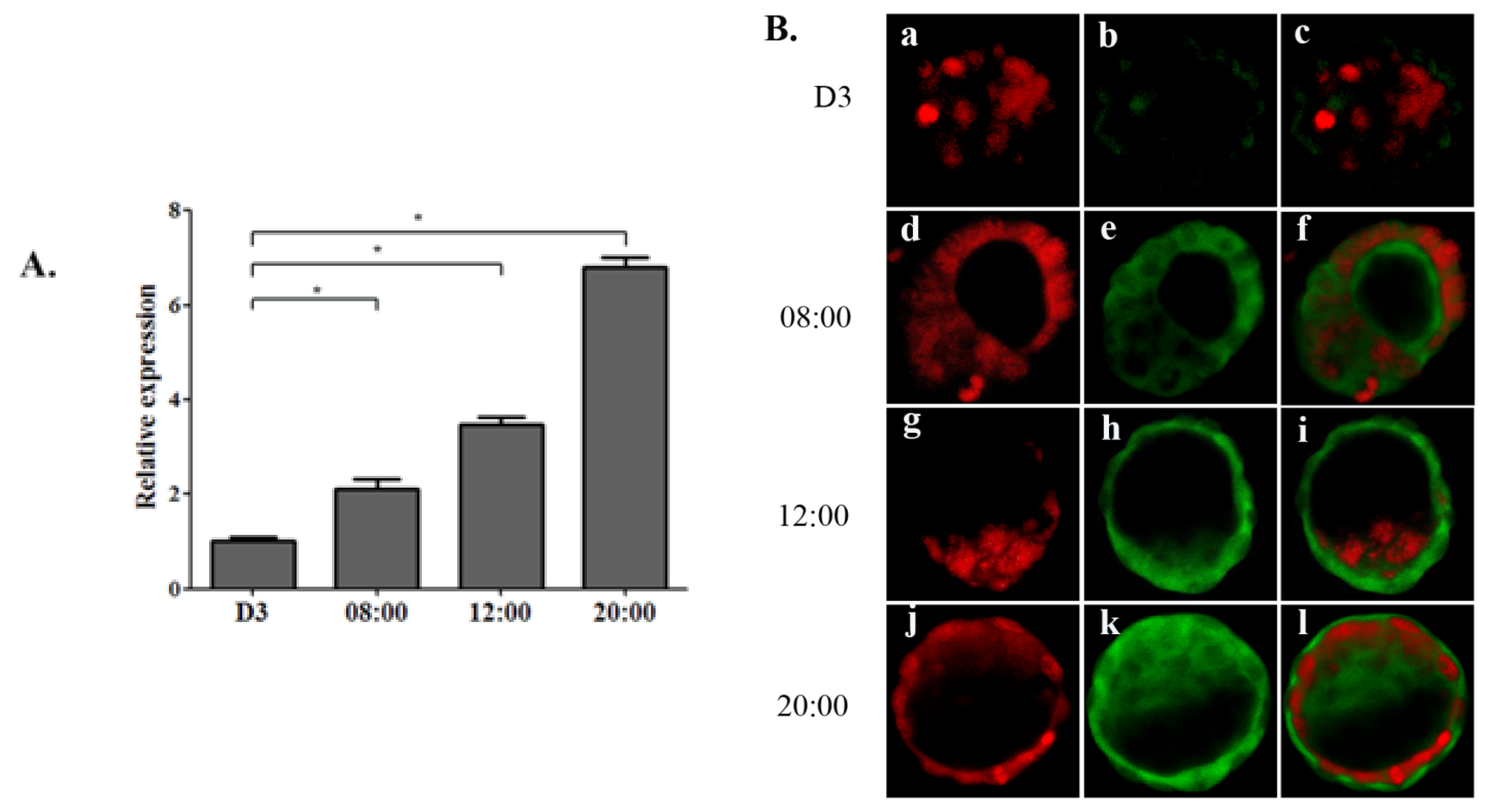 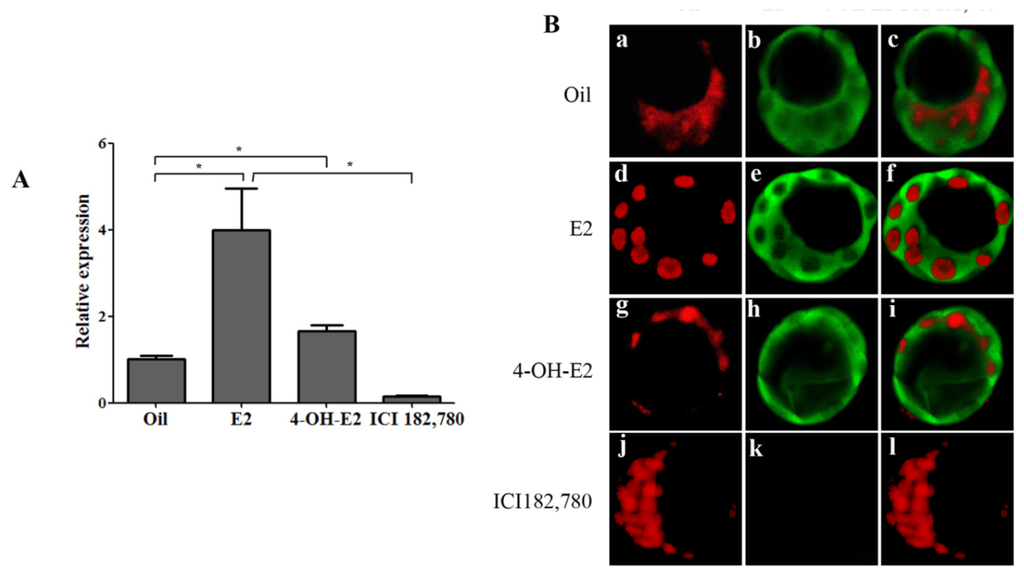 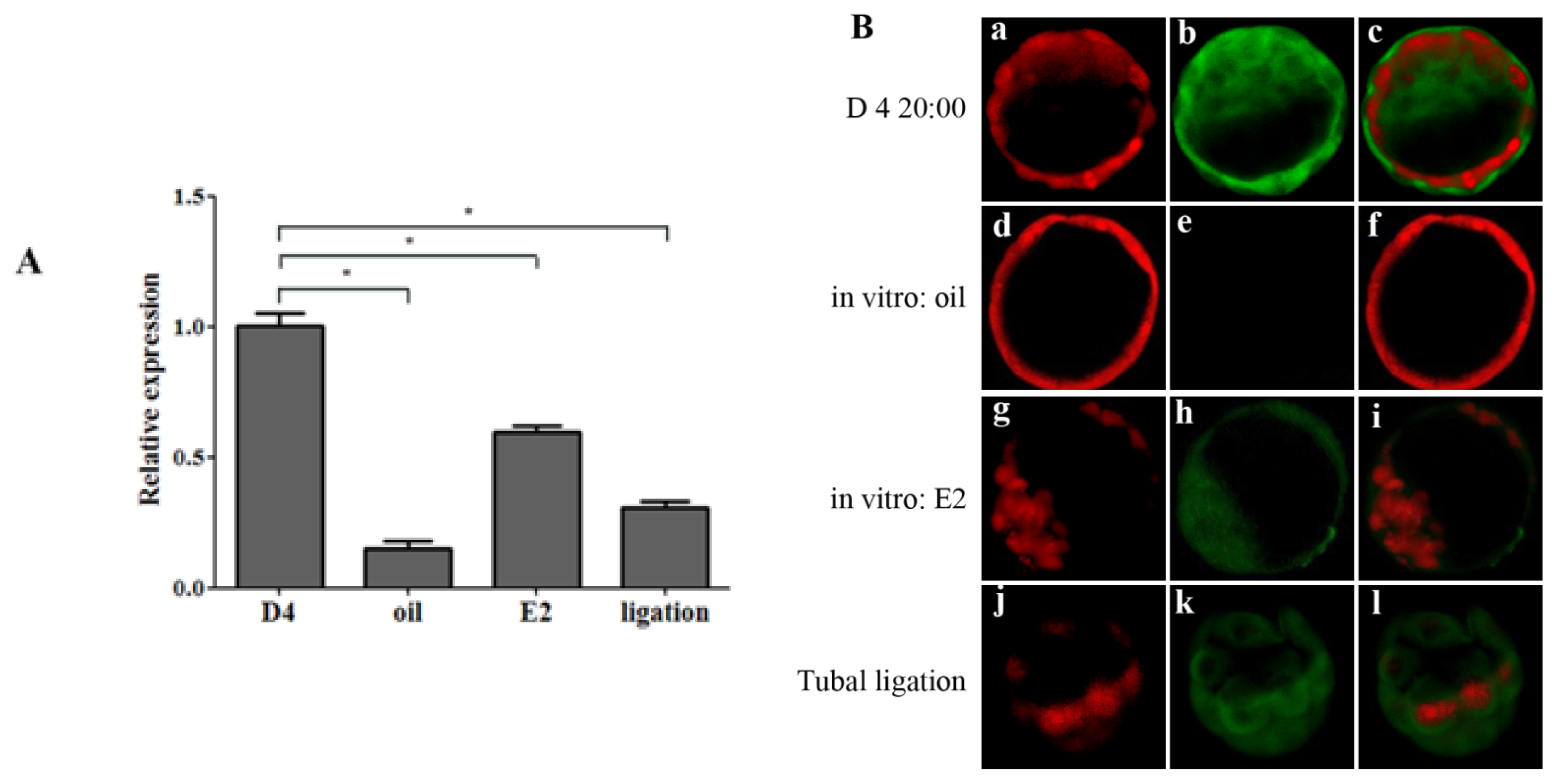