Effect of Dietary Cholesterol and Cholesterol Oxides on Blood Cholesterol, Lipids, and the Development of Atherosclerosis in Rabbits
Previous Article in Special Issue

Effect of GABA, a Bacterial Metabolite, on Pseudomonas fluorescens Surface Properties and Cytotoxicity

Most infectious diseases are caused by bacteria, which proliferate within quorum sensing (QS)-mediated biofilms. Efforts to block QS in bacteria and disrupt biofilms have enabled the identification of bioactive molecules that are also produced by plants. This mini review primarily focuses on natural QS inhibitors, which display potential for treating bacterial infections and also enhance the safety of food supply.
Keywords: quorum sensing; phytochemicals quorum sensing; phytochemicals

During their evolution, bacterial communities have developed several sophisticated ways of interacting and associating with the environment they inhabit. Microorganisms may respond to a perceived change by altering their phenotype so that their metabolism and other activities are successful in the new environment. In the last few decades, it has also become evident that bacteria coordinate both bacterium-bacterium interactions and associations with higher organisms through intercellular communication systems that are often based on the expression of new genes, known as quorum sensing (QS) systems. QS-controlled behaviors take place only when bacteria reach a specific cell density. Such behaviors are unproductive if undertaken by a singular bacterium but become effective when the action is simultaneously performed by a group of bacteria. QS can regulate a number of activities, such as bioluminescence, virulence factor expression, sporulation, biofilm formation and mating. QS is realized through the bacterial production of chemical signaling molecules, also known as autoinducers or bacterial pheromones. These signals are produced while the bacterial population grows until a threshold concentration perceived by the bacteria is reached, resulting in the activation or repression of specific genes. The accumulation of a stimulatory amount of such molecules can occur only when a specific, sufficient number of cells, referred to as a quorum, are present [1].
The QS system can be seen as being based on the following crucial elements:
The autoinducers can differ depending on the bacteria. They can be classified into three subclasses [2]: Autoinducers belonging to the first class are used by Gram-negative bacteria; the molecules of the second class are used by Gram-positive bacteria; and the third class of biomolecules can be used both by Gram-positive and Gram-negative bacteria.
Gram-negative bacteria generally produce acylated homoserine lactone (AHL) as autoinducers, which are synthesized by a LuxI-type enzyme (signal synthase), encoded by the first gene of the lux operon, as shown in Figure 1. At a low bacterial cell density, the low level of transcription of the lux operon is insufficient for the activation of LuxR. When the cell density increases and signal levels reach a specified threshold level, LuxR activation can take place. The LuxR/3-oxo-C6-HSL complex thereby activates transcription via the lux operon promoter, giving rise to the expression of other genes, including (in Vibrio fischeri) lux AB genes encoding luciferase and lux CDE, which encodes the enzymes that produce the substrate for luciferase and, hence, bioluminescence. These molecules passively diffuse through the bacterial membrane and accumulate both intra- and extracellularly in proportion to the cell density. Quorum-sensing circuits have been identified in over 25 species of Gram-negative bacteria. Using the quorum-sensing mechanism, Gram-negative bacteria can efficiently couple gene expression to fluctuations in cell population density. Among these species, the V. fischeri, Pseudomonas aeruginosa, Pseudomonas fluorescens, Pseudomonas chlororaphis, Erwinia carotovora and Agrobacterium tumefaciens systems can be considered the best understood. More recently, the quorum system mechanism of Chromobacterium violaceum has been studied and used to evaluate the quorum and antiquorum activity of its biocomponents [3]. In the opportunistic human pathogen P. aeruginosa, a hierarchical LuxI/LuxR circuit regulates QS. Two pairs of LuxI/LuxR homologues, LasI/LasR and RhlI/RhlR, exist in P. aeruginosa. Both LasI and RhlI are autoinducer synthases, which catalyze the formation of the HSL autoinducers N-(3-oxododecanoyl)-homoserine lactone and N-(butryl)-homoserine lactone, respectively. These two regulatory circuits act in tandem to control the expression of a number of P. aeruginosa virulence factors. The P. aeruginosa quorum-sensing circuit functions as follows: At a high cell density, LasR binds its HSL autoinducer, and together, they combine with promoter elements immediately preceding the genes encoding a number of secreted virulence factors that are responsible for host tissue destruction during the initiation of the infection process. These pathogenicity determinants include elastase, encoded by lasB, a protease encoded by lasA; ExotoxinA, encoded by toxA, and alkaline phosphatase, which is encoded by the aprA gene. The LasR-autoinducer complex also activates the expression of the second quorum-sensing system of P. aeruginosa through the activation of a second class of specific target genes, encoding the stationary phase sigma factor rhamnosyl transferase, which is involved in the synthesis of the biosurfactant/hemolysin rhamnolipid, as well as genes involved in pyocyanin antibiotic synthesis and the lecA gene, which encodes a cytotoxic lectin [4]. In Cromobacterium violaceum, a Gram-negative microorganism found in water and soil, the phenotypic response to AHLs involves the production of a variety of factors, including antibiotics, hydrogen cyanide, proteases, chitinase and particularly violacein, a water-insoluble purple pigment with antibacterial activity [3,5].

Gram-positive bacteria also regulate a variety of processes in response to an increasing cell population density, but in contrast to Gram-negative bacteria, which use HSL autoinducers, Gram-positive bacteria employ secreted peptides processed from precursors, that can be used as autoinducers for QS (Figure 2). Signals are actively exported outside the cell, where they interact with the external domains of membrane-bound sensor proteins. The transduction of a signal generated by a phosphorylation cascade culminates in the activation of a DNA-binding protein, that influences the transcription of specific genes, so that each sensor protein is highly selective for a given peptide signal. In Gram-positive bacteria, a peptide signal precursor locus is translated into a precursor protein that is cleaved to produce the processed peptide autoinducer signal. This signal is then usually transported out of the cell via an ABC transporter. When the extracellular concentration of the peptide signal accumulates to the minimal stimulatory level, a histidine sensor kinase protein belonging to a two-component signaling system detects it. The sensor kinase autophosphorylates a conserved histidine residue (H), and the phosphoryl group is subsequently transferred to a cognate response-regulator protein. The response regulator is phosphorylated on a conserved aspartate residue (D), which activates the transcription of a target gene or genes [4]. Similar to Gram-negative bacteria, Gram-positive bacteria can employ multiple autoinducers and sensors. However, some peptides can exclusively act from outside the bacterial cell, eliciting a specific set of gene expression changes by being transported into the cell, where they can activate a different set of behavioral changes. A furanosyl boronated diester molecule termed AI-2 and a non-boronated diester molecule, vA1-2, are used by Gram-positive and Gram-negative bacteria for intra- and interspecies communication [1]. Many Gram-negative bacteria use AHL autoinducers and also produce AI-2. Likewise, many Gram-positive bacteria display oligopeptide signaling systems as well as AI-2. Making and responding to combinations of these and potentially other types of chemical signals could allow bacteria to take a census of their own population nitrogen levels as well as the population density of other species in the vicinity. A distinct response to each signal, or a response based on a combinatorial sampling of a variety of signals, could enable bacteria to continuously modulate their behavior depending on the species present in a consortium.

Interventions targeting bacterial QS in food are largely unexplored at present. Consumer expectations of obtaining pathogen-free food with an acceptable shelf life without the use of chemical additives represent a great challenge for the food industry based on currently available technologies. Biocontrol approaches using vegetal extracts or pure compounds obtained from plants offer some specific advantages compared to more conventional treatments. Indeed, thus-treated food is perceived as more “natural” and “green.” Although no one bio-control approach can currently address this problem in its entirety, such approaches, together, generate a toolbox of options that may act in synergistic and complementary ways, through various mechanisms of attack, that can be applied individually or in combination. Indeed, it is becoming increasingly evident that the use of phytochemical-based biocontrol strategies in food shows great potential for more realistic outcomes, although much work is still necessary to move these treatments from the laboratory bench to market.
Additionally, better understanding the potential of phytochemicals to inhibit QS activity is of great relevance to the field of research aimed at the identification and development of novel anti-QS compounds capable of preventing bacterial infections in humans. Such “antipathogenic” compounds, in contrast to antibacterial compounds, would not kill bacteria or completely stop their growth and would therefore most likely prevent the development of resistant strains [72]. Finally, in recent years, plant bioengineering could be helpful, which in particular, could influence their associated bacteria, as demonstrated for example by QS strategies suppressing the influence of pathogens of the genus Pectobacterium [73]. 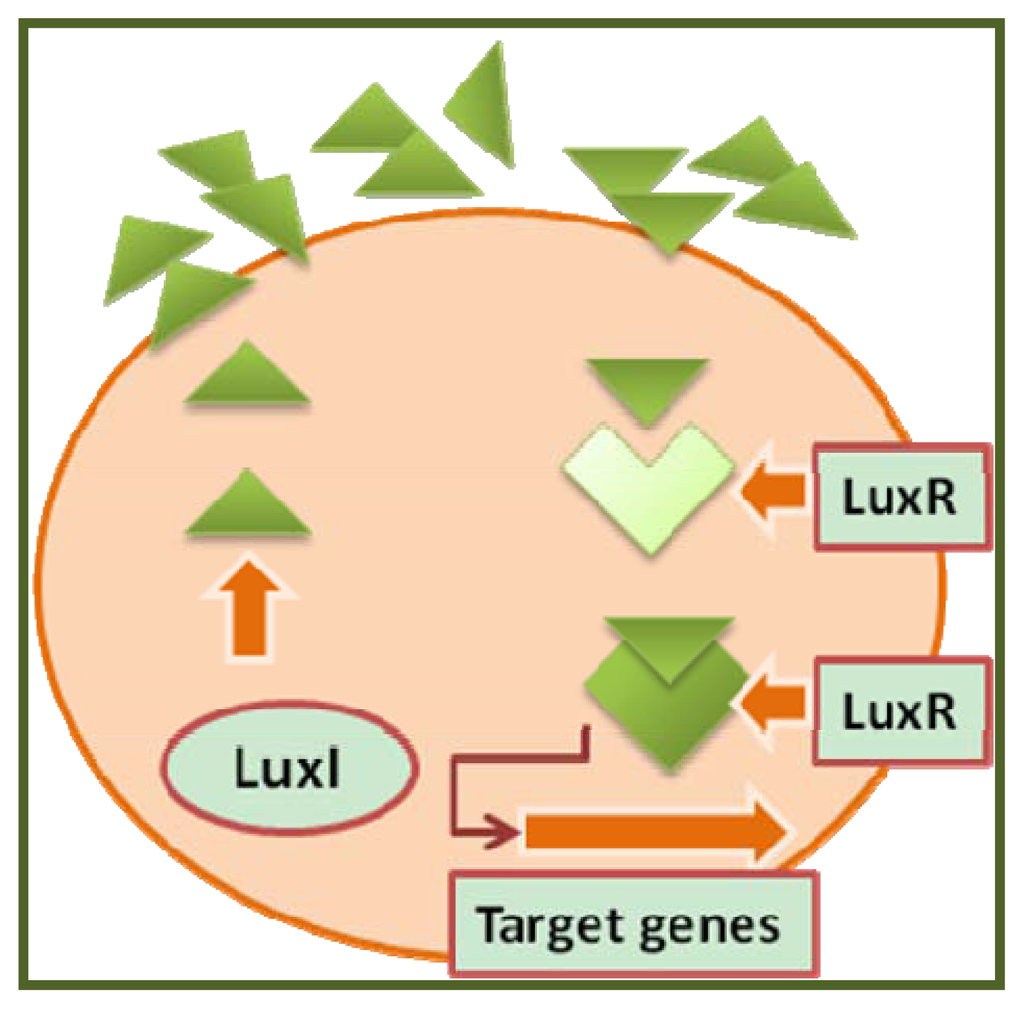 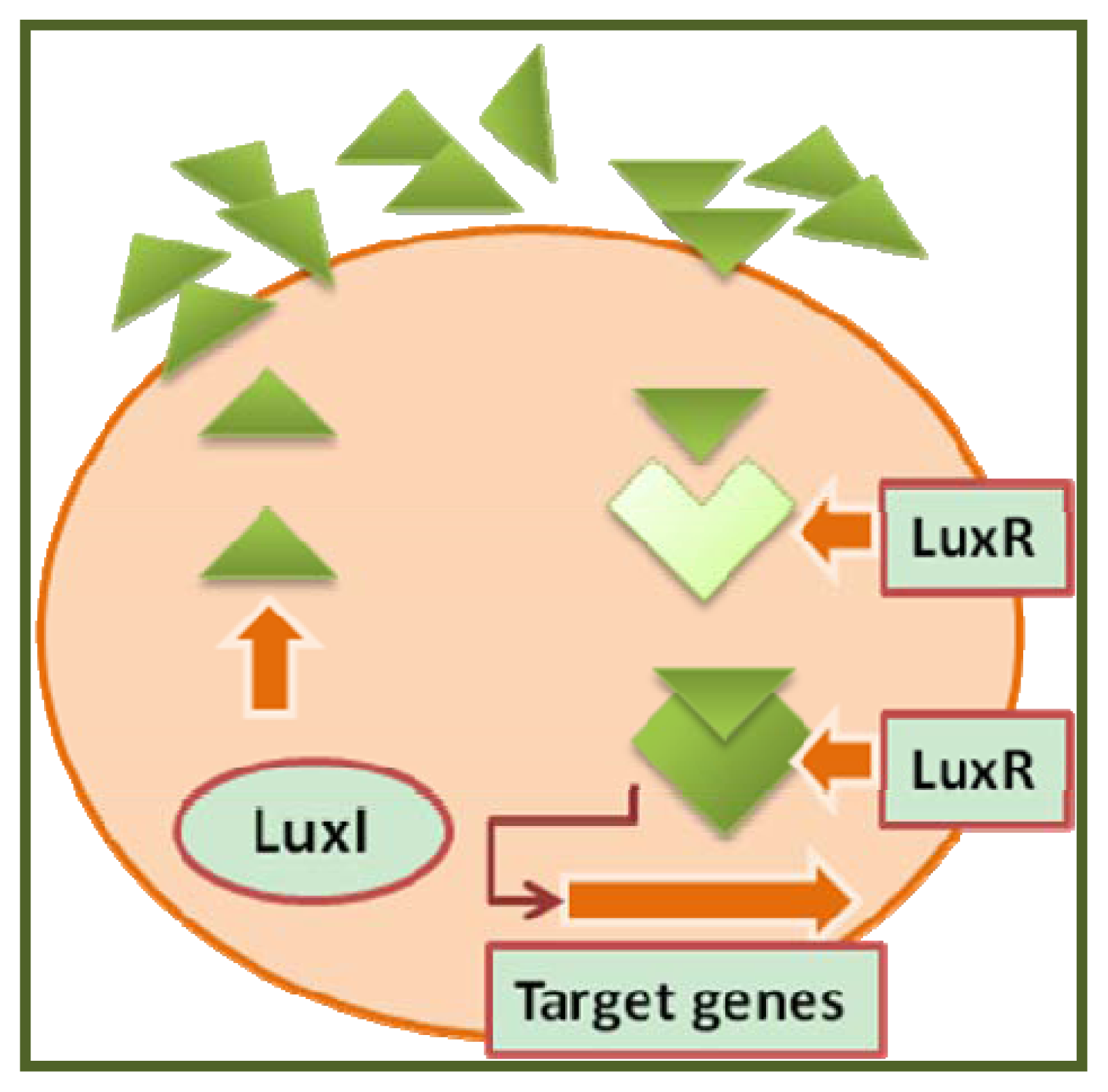 © 2013 by the authors; licensee MDPI, Basel, Switzerland This article is an open access article distributed under the terms and conditions of the Creative Commons Attribution license ( http://creativecommons.org/licenses/by/3.0/).