The orange-spotted grouper (Epinephelus coioides) belongs to the subfamily Epinephelinae (family, Serranidae) and mainly inhabits the Indian Ocean, the Red Sea, the Mediterranean Sea, the Northern Pacific Ocean, the Western Pacific Ocean and Southeast Asia [1,2]. It is a highly valued cultured marine species and is farmed in many countries including China, Thailand, Singapore, Japan, Indonesia, and Brunei Darussalam [3]. According to FAO fishery statistics, the global aquaculture production value of the orange-spotted grouper has increased by almost 100-fold from 1999 to 2009, from 33,000 to 2,354,000 US dollars [4]. Currently in China, the orange-spotted grouper has become a major food fish in live fish markets and is an important cultured fish for commercial sale in the Guangdong, Hainan, Taiwan and Fujian provinces. The vast market demands for orange-spotted grouper have driven efforts to breed families and populations with higher growth rates and lower food coefficients. The application of marker-assisted selection (MAS) to the orange-spotted grouper is a promising strategy for improving growth traits, and the identification of genetic markers associated with growth traits could contribute to genetic improvements in cultured fishes and advance the MAS process.
Leptin, a product of the obese (ob) gene first discovered in the mouse by Zhang et al. in 1994 [5], is a member of the class-I helical cytokine family. In mammals, leptin has been demonstrated to perform important roles in body weight regulation, energy expenditure, fat metabolism, food intake, appetite regulation, bone remodeling, hematopoiesis, immune function and reproduction [6–8]. In teleosts, its function remains unclear, although several studies have been conducted on the teleost leptin genes, which was first cloned in the pufferfish (Takifugu rubripes) [9]. Since then, and in keeping with the genome duplication observed in teleosts, leptin genes have been identified in several teleost species, including the common carp (Cyprinus carpio) [10], zebrafish (Danio rerio) [11], Japanese medaka (Oryzias latipes) [12], grass carp (Ctenopharyngodon idella) [13], rainbow trout (Oncorhynchus mykiss) [14], Atlantic salmon (Salmo salar) [15], striped bass (Morone saxatilis) [16], goldfish (Carassius auratus) [17] and orange-spotted grouper [18]. Unlike other vertebrate animals, which have only a single copy of the leptin gene, duplicate leptin genes have been identified in some teleost fish, such as zebrafish [11], Japanese medaka [12], and orange-spotted grouper [18]. With respect to the cloned leptin genes in fish, leptin a type was found to be present in the majority of species studied [19]. In the orange-spotted grouper, leptin-a mRNA was found to be expressed in most tissues at generally higher levels than that of leptin-b. The highest expression of leptin-a was found in cerebellum, liver and ovary, which suggests that the expression protein of leptin-a gene may have pleiotropic physiological effects [18]. Compared to the leptin-b gene, the leptin-a gene is more likely to affect growth traits in the orange-spotted grouper.
Several polymorphisms of the leptin genes have been associated with economically relevant traits in many farmed animals, especially swine [20] and cattle [21–23]. However, in teleost fish, no papers have reported polymorphisms in the leptin genes and their associations with growth traits.
The objectives of this study were to identify single nucleotide polymorphisms (SNPs) in the leptin-a gene and to analyze associations between these polymorphisms and growth traits in the orange-spotted grouper. In teleost fish, this is the first study of leptin polymorphisms and their associations with growth traits, and these findings will help to evaluate the use of leptin genes in marker-assisted selection (MAS) of the orange-spotted grouper and other cultured fish.

The open reading frame (ORF) of the leptin-a gene in the orange-spotted grouper contains 2 exons of 152 bp and 334 bp, which code for a 161-amino acid protein. One intron of 87 bp was identified between the 2 exons. Six SNPs were identified by alignment of leptin-a gene fragments from 200 individuals. Two mutations were found in intron 1 (c.182T > G, c.183G > T), and 4 synonymous mutations were found in exon 2 (c.339C > G, c.345C > T, c.447G > A, c.531C > T). The observed and expected heterozygosity ranged from 0.030 to 0.205 and from 0.030 to 0.251, respectively. One locus (c.531C > T) deviated significantly from Hardy-Weinberg equilibrium (p < 0.05). All the 6 SNPs presented low polymorphisms (PIC < 0.25). In the experimental population, heterozygous mutational genotypes were detected for the 6 SNPs, but recessive homozygosis mutational genotype was only detected for the c.531C > T SNP (Table 1).
Our results showed that the 2 mutations in intron 1 (c.182T > G, c.183G > T) appeared in pairs and were in complete linkage. All of the fragments from individuals with the mutational genotype presented the same chromatograms, which are shown in Figure 1b. Using comparative analysis of chromatograms from individuals with normal and mutational genotypes (Figure 1), we deduced that these SNPs (c.182T > G, c.183G > T) were produced by base exchange between the T of locus 182 and the G of locus 183. Therefore, in association analyses, these 2 SNPs (c.182T > G, c.183G > T) were analyzed together and were marked as a single locus (c.182 + 183TG > GT). For the locus (c.182 + 183TG > GT), AA represents the dominant homozygous normal genotype (TT/GG) and AB represents the recessive heterozygous mutational genotype (TG/GT).

The experimental population was generated by the parent fish, 29 males and 12 females, which were the first generation progeny of a wild broodstock collected from the South China Sea near Hainan Island. On 10 December 2010, approximately 1 month after hatching, 15,000 fry were transported and placed into one net cage built in the fisheries area in Haitang bay of Sanya (Hainan Province, China) on the South China Sea. The experimental stock was maintained under constant environmental conditions and was fed according to the management practices of the fishery farm. On 8 August 2011, 200 juvenile fishes were sampled randomly from the cage. These samples were assigned numbers from 1 to 200. Eleven phenotypic traits were measured and recorded, including BWT, BWH, OL, body length (BL), TW, HL, caudal peduncle width (CPW), CPL, snout length (SL), eyeball diameter (ED), and interorbital distance (ID). We also calculated K as a growth trait according to the following formula: K = 100 BWT/BL3. Descriptive statistics of the growth traits observed are presented in Table 3. Tissues were collected from fin clips and were preserved in 95% ethanol at −20 °C until processing for DNA isolation. Total genomic DNA extractions from fin clips were performed according to the proteinase K/phenol extraction protocol previously described by Sambrook and Russell [38]. The concentration of genomic DNA was determined by agarose gel electrophoresis using a UV spectrophotometer.

Allele and genotype frequencies were calculated using a simple allele counting method. Hardy-Weinberg equilibrium was tested for goodness-of-fit by comparing expected and observed genotype frequencies using a chi-square test.
The 12 growth traits were synthetically evaluated to determine the universality, the standard deviation, the coefficient of variance, and the degree of normal distribution (Table 3). Seven traits, including BWT, BWH, OL, TW, HL, CPL and K, were selected as representative growth traits of the orange-spotted grouper.
Association analyses between genotypes of leptin-a and 7 growth traits were performed using general linear model (GLM) procedure with SPSS 20.0 software (IBM, Armonk, NY, USA). We used the following statistical model: Y = u + G + e, where Y is the phenotypic value of each trait; u is population mean value of 7 growth traits, G is the fixed genotype effect of each SNP, and e is the random error effect. Multiple comparisons between different genotypes were tested using the LSD method with Bonferroni correction adjustment.

We obtained the gene sequence and identified 6 SNPs in the leptin-a gene of the orange-spotted grouper. Association analysis with seven growth traits revealed that: 2 SNPs in intron 1 (c.182T > G, c.183G > T) were in complete linkage and were significantly associated with BWT and BWH, with the mutation genotype AB (TG/GT) showing positive effects on such growth traits. Additionally, the SNP c.447G > A was significantly associated with BWT, BWH, OL, TW, and HL, with the genotype GA positively affecting these growth traits. Finally, the SNP c.531C > T in exon 2 was associated with growth traits, and fish with the genotype TT showed poorer growth performance. This is the first study in teleost to provide further evidence for the association of leptin gene polymorphisms with growth traits, and these findings could lead to a greater understanding of the functions and regulation of leptin gene expressions related to fish growth. These results also validate to the candidate gene approach and the use of the leptin-a gene for MAS in the orange-spotted grouper.

This research was supported by the Special Fund for Agro-Scientific Research in Public Interest (No.200903046), the National 863 Program of China (No.2012AA10A407 and 2012AA10A414), the National Natural Science Foundation (No.31001112), the Fundamental Research Funds for Central Universities (No.11lgpy66), the Hainan Provincial Natural Science Foundation (No.310064), and the Sanya municipal Science and Technology Program (No. 2010YD57). The authors thank X.C. Liu, Y.C. Ke, L. Guo, N. Yang and X. Zhang for technical assistance and sample preparation. 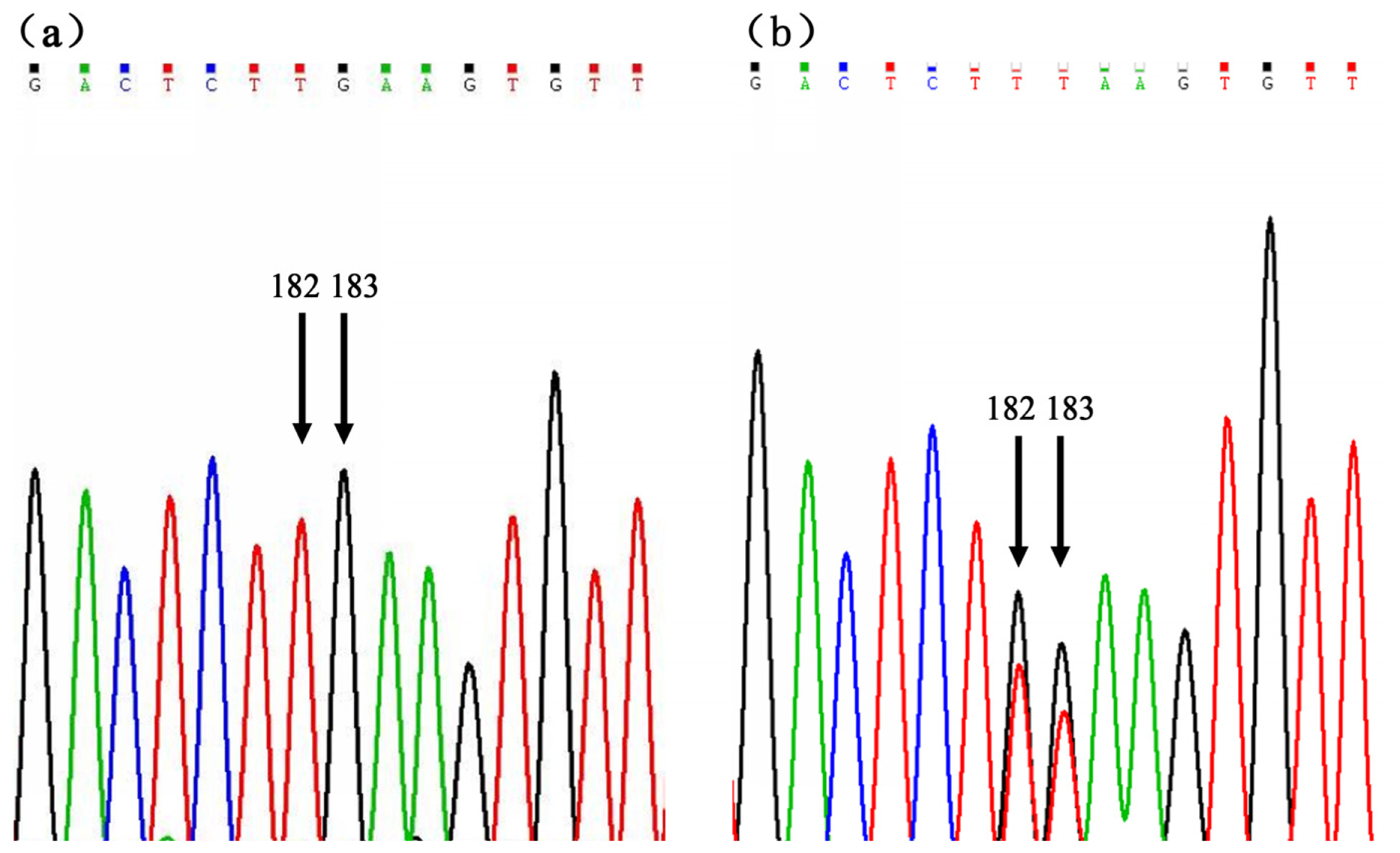