Research over the last 15 years has evidenced that intercellular communication frequently occurs in bacteria regulating gene expression in a cell density-dependent signaling, referred to as “quorum sensing” (QS) [1]. Gram-negative bacteria most commonly use N-acyl homoserine lactones (AHLs) as signal molecules; AHLs are synthesized by LuxI-family proteins and at high concentration (i.e., high cell density) they bind to a cognate LuxR-family regulatory protein, which consequently binds target gene promoters. There is a class of LuxR-family proteins having the typical modular structure of QS LuxRs, which do not possess a cognate LuxI AHL synthase; these LuxR proteins have been called orphans or solos [2,3]. A sub-family of LuxR solos of Plant Associated Bacteria (PAB) has recently been shown to be part of a novel interkingdom signaling circuit, involved in communication between plant with both pathogens and beneficial bacteria [4,5]. It is likely that this sub-family of LuxRs of this interkingdom signaling circuit shares structural and functional similarities with the archetypical LuxI/R QS systems [6]. These PAB LuxR solos bind and respond to plant signals and probably have undergone coevolution with the host plant.
Five members of this PAB LuxR solos subfamily have been studied: XccR of Xanthomonas campestris pv. campestris (Xcc), OryR of Xanthomonas oryzae pv. oryzae (Xoo), PsoR of Pseudomonas fluorescens, XagR of Xanthomonas axonopodis pv. glycines (Xag) and NesR of Sinorhizobium meliloti [2,7–11]. With the exception of NesR, all have been demonstrated to respond to as yet chemically uncharacterized low molecular weight signal molecules synthesized by the host plant, with the final outcome of regulating crucial aspects of plant-bacteria interactions. Namely, OryR of the rice vascular pathogen Xoo, is involved in virulence; it responds to plant signals since the protein is solubilized and activates the expression of the neighboring pip and of motility genes only in the presence of plant extracts [4,7,9]. XccR of the crucifer pathogen Xcc also responds to an as yet unidentified plant compound and regulates the neighboring pip gene; the presence of the plant extracts allows XccR to bind to the pip promoter in vitro [8]. XagR of the soybean pathogen Xag which causes bacterial leaf pustule on soybean (Glycine max) is also involved in virulence [11]. As for XccR in Xcc, XagR in Xag also activates pip transcription in planta and temporal studies have indicated that pip transcription increases gradually after infection, reaching its greatest activity after 72 h, before slowly decreasing. PsoR responds to plant compounds of different plant species playing a role in biocontrol by rhizospheric Pseudomonas fluorescens via the control of transcriptional regulation of various anti-microbial-related genes [10]. NesR of Sinorhizobium meliloti is important for survival under stress and utilization of various carbon sources; the response to plant compounds has not yet been addressed [2].
Nevertheless, being closely related to the QS LuxRs, this sub-family of PAB LuxR solos share the same overall protein architecture, comprising two functional domains. In particular, members of the QS LuxR family are mainly composed of an N-terminal ligand-binding domain (the regulatory domain) [12,13] and a C-terminal helix-turn-helix DNA-binding domain [14,15], joined together by a short linker region. In QS systems, a conformational change is induced upon binding of the regulatory domain to the cognate AHL, most commonly then allowing the recognition of specific promoter regions by the DNA-binding domain and leading to transcriptional activation [16,17]. Indeed binding to the AHL is responsible for stability, correct folding [16] and most commonly dimerization, which in turns stabilizes the transcription factor allowing DNA binding [18].
Surprisingly conservation of primary structure among LuxR-family proteins is quite low (18%–25%), however, multiple sequence alignments performed have identified nine highly conserved residues (Figure 1): six of these residues delineate the cavity of the ligand-binding domain (W57, Y61, D70, P71, W85 and G113, according to TraR numbering) and the remaining three are located within the DNA-binding domain (E178, L182 G188) [19–22]. On these bases in a recent review Gonzales and Venturi [4] pinpointed that members of PAB LuxR solos subfamily show substitutions in one or two of these highly conserved amino acids in the regulatory domain, namely, W57M and Y61W, thus suggesting an involvement of these residues in the different selectivity of this subfamily towards specific host plant signal molecules rather than to AHLs.
Considering that the experimental three dimensional structures of several members of the LuxR family [23–30] show a quite conserved overall folding, with the regulatory domain composed of five anti-parallel β-sheets flanked by three α-helixes on each side, our aim here is to: (i) validate and extend the previous analysis of LuxR-family, based on primary sequence alignment, in order to dissect the structural determinants involved in ligand recognition; and (ii) extend the outcomes of the detailed molecular cartography to the PAB LuxR solos subfamily in order to identify the molecular determinants responsible for the different ligand selectivity of this subfamily.
In the present study we take advantage of the large body of experimental structural data available for several members of the LuxR-family in complex not only with cognate AHLs, but also with unrelated signaling molecules [23–30], focusing on structure-based sequence alignment, structural superimposition and a comparative analysis of the contact residues involved in ligand binding; this should allow the identification of the key residues characterizing the ligand-binding sites. Moreover, in the absence of experimentally determined structures of members of the PAB LuxR solos subfamily, the homology model of its prototype, OryR, is expected to provide us with sufficient information to gain insights into the architecture of its ligand-binding site, as well as to elucidate the likely structural basis of the reported different ligand selectivity between the PAB LuxR solos subfamily and the canonical QS LuxR receptors.

Sequence alignment was performed by Expresso [31], that exploits structural aligners algorithms like SAP [38] or TMalign [39] to generate structure-based alignments that are used as a template for realigning the original sequences.
All the complexes of QS LuxR deposited in PDB both solved by X-ray crystallography, i.e., TraR from Agrobacterium tumefaciens in complex with OC8-HSL (PDB_ID 1L3L [23], PDB_ID 1H0M [24]), TraR from Sinorhizobium fredii NGR234 in complex with OC8-HSL (PDB_ID 2Q0O [25]); LasR from Pseudomonas aeruginosa in complex with OC12-HSL (PDB_ID 2UV0 [26], PDB_ID 3IX3), with TP1 (PDB_ID 3IX4 [27]), with TP3 (PDB_ID 3IX8 [27]) and with TP4 (PDB_ID 3JPU [27]); QscR from Pseudomonas aeruginosa in complex with OC12-HSL (PDB_ID 3SZT [28]); CviR from Chromobacterium violaceum in complex with C6-HSL (PDB_ID 3QP1 and PDB_ID 3QP6 [29]), in complex with OC8-HSL (PDB_ID 3QP2 [29]), in complex with OC10-HSL (PDB_ID 3QP4 and PDB_ID 3QP8 [29]) and in complex with an antagonist chlorolactone (PDB_ID 3QP5 [29]) and by NMR, i.e., SdiA from Escherichia coli in complex with OC8-HSL (PDB_ID 2AVX [30], have been superimposed using Pymol [33] and analyzed by using the Protein Interfaces, Surfaces and Assemblies (PISA) web tool at the European Bioinformatic Institute [34].
Homology-based protein modelling has been performed on the full-length amino acidic sequence of OryR protein from Xanthomonas oryzae using five molecular modelling strategies based on different criteria for template selection. SWISS-MODEL [40] performs a search in a library of experimental protein structures extracted from the PDB: up to five template structures per batch are superposed using an iterative least squares algorithm generating a structural alignment after removing incompatible templates, improved by a heuristic step after the calculation of a local pair-wise alignment of the target sequence to the main template structures [41]. ModWeb [42] depends on the large scale protein structure modeling pipeline, ModPipe, which performs a search in a set of non-redundant chains extracted from structures in the PDB and establishes sequence-structure matches using multiple variations of sequence-sequence, profile-sequence, sequence-profile and profile-profile alignment methods [43–45]. M4T (Multiple Mapping Method with Multiple Templates) [46] is based on two of major modules, Multiple Templates (MT) and Multiple Mapping Method (MMM) [47], developed to produce accurate alignments and models by minimizing the errors associated with the first two steps of modeling procedure (template recognition and alignment). HHpred (Homology detection & structure prediction by HMM-HMM comparison) [48] implements pairwise comparison of profile hidden Markov models (HMMs) to generate pairwise query-template alignments or multiple alignments of the query with a set of templates selected from the search results. I-TASSER (iterative threading assembly refinement) [36] generates three-dimensional atomic models from multiple threading alignments and iterative structural assembly simulations.
The five top-scored models generated have been ranked and validated by two protein model quality predictors ProQ [49] and AIDE [50], that have different and often complementary ability to properly assess the quality of protein structures and therefore their combined use can increase the reliability in the evaluation of model quality. The resulting outputs were consistent, pinpointing the top-scored model (confidence score 0.64) produced by I-TASSER, based on the QscR template (PDB_ID 3SZT [28]), as the most reliable candidate. Indeed the correctness of the selected model was confirmed by ProQ [49] (having Predicted LGscore of 4.299 and Predicted MaxSub of 0.437) and its overall best quality was validated by AIDE [50] (with a Predicted TM-score of 0.69 and a Predicted RMSD of 6.97).
Electrostatic potentials calculations were performed by PDB2PQR [51] and visualized by Pymol [33] on the ligand surface in the ligand-binding sites of the QS LuxRs and on the cavity surface of the ligand-binding site of OryR model. Lipophilic potential representation, based on the hydrophobicity scale derived by Black and Mould [52], was performed by Pymol [33] on cavity surface of the ligand-binding site of the QS LuxRs and of OryR model.
Binding sites preferences of QS LuxRs and of PAB LuxR solos prototypes, TraR and OryR respectively, were analyzed by SITEHOUND [37] employing three different structural probes (i.e., methyl carbon, aromatic carbon and hydroxyl oxygen).

The present study was aimed to dissect the cartography of the ligand-binding sites of the QS LuxRs by structure-based sequence alignment, structural superimposition and comparative mapping residues directly involved in ligand binding. The structure-based analysis pinpointed the key residues crucial for ligand recognition and led us to identify a tripartite architecture of the ligand-binding sites that may account for differences in selectivity within the QS LuxR family. In order to extend this detailed molecular cartography of the regulatory domain to the PAB LuxR solos subfamily, an homology model of its prototype OryR has been obtained. Its comparative structural analysis allowed the identification of the key molecular determinants shaping the physico-chemical properties (electrostatic and lipophilic potentials). The resulting binding sites topochemical preferences are likely to be responsible for the difference in selectivity of the PAB LuxR solos towards specific host-plant signal molecules rather than towards canonical QS ligands. 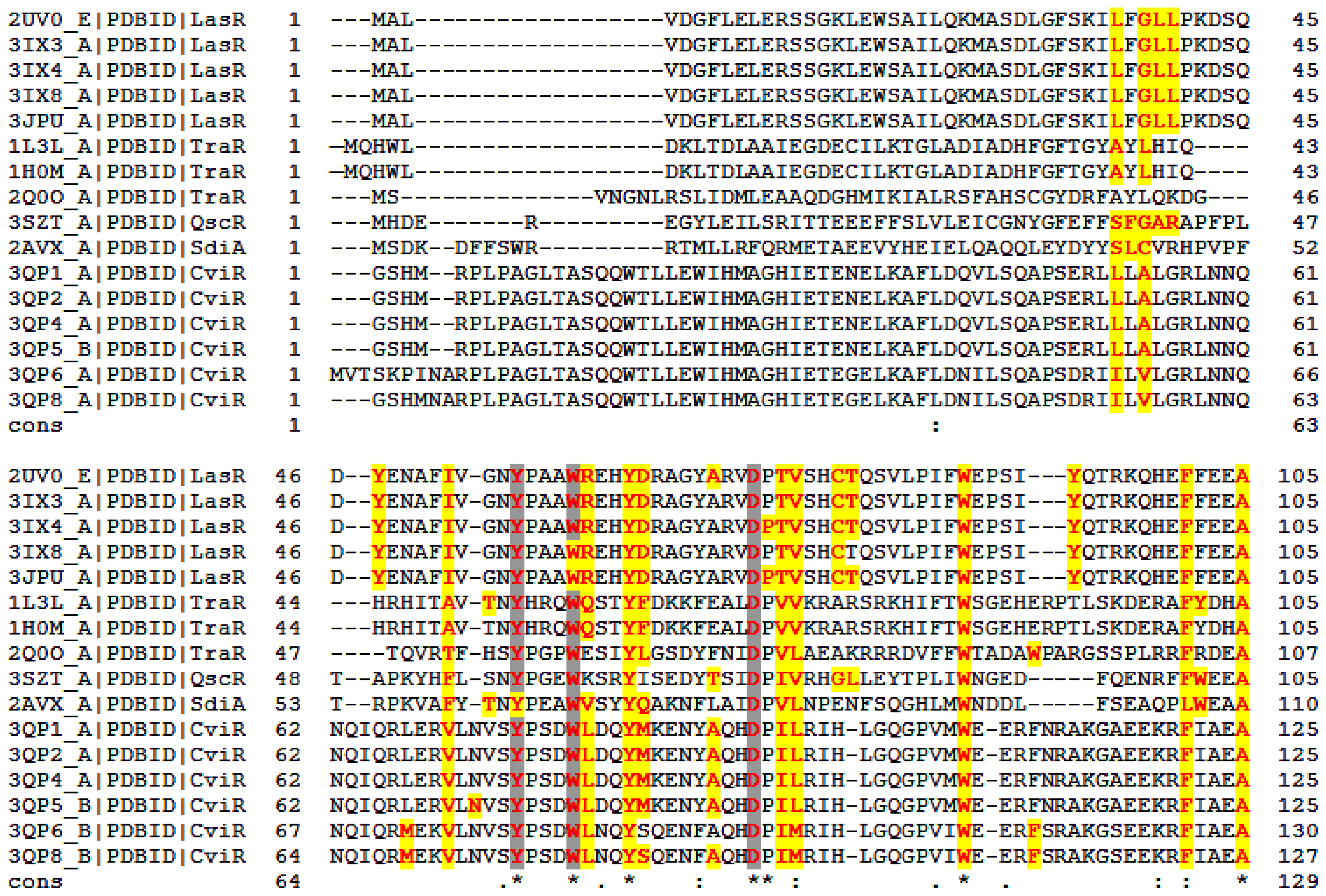 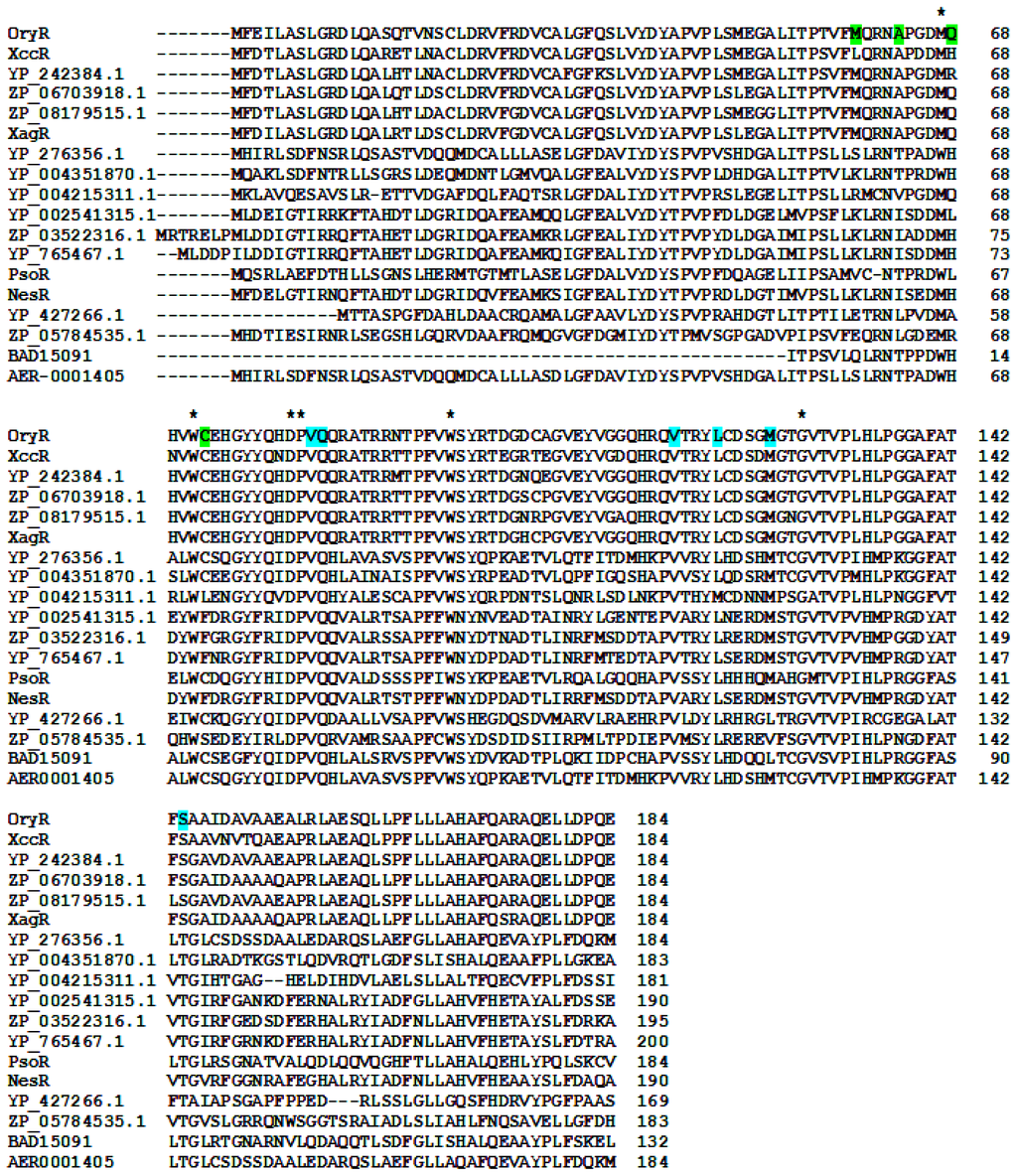 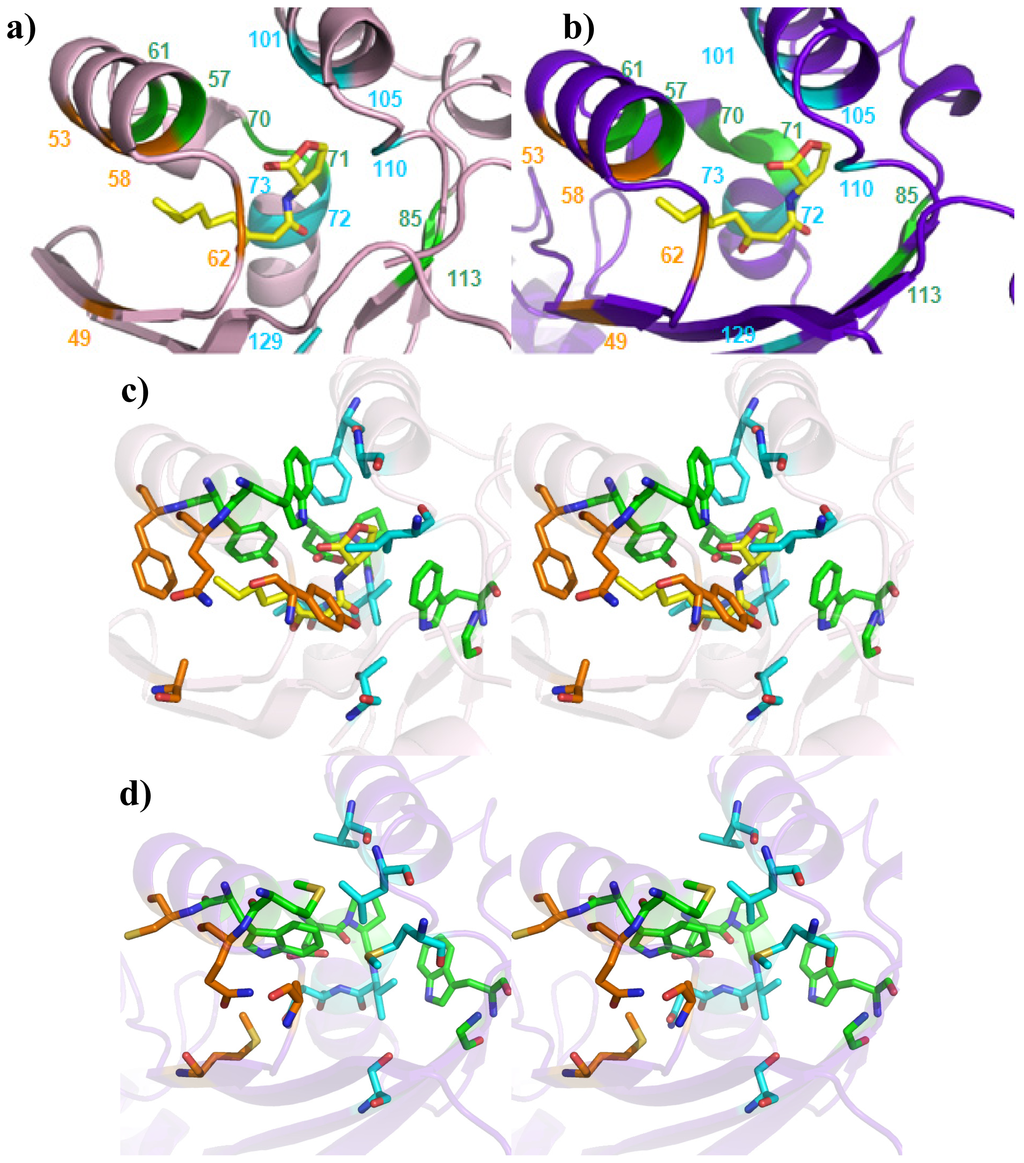 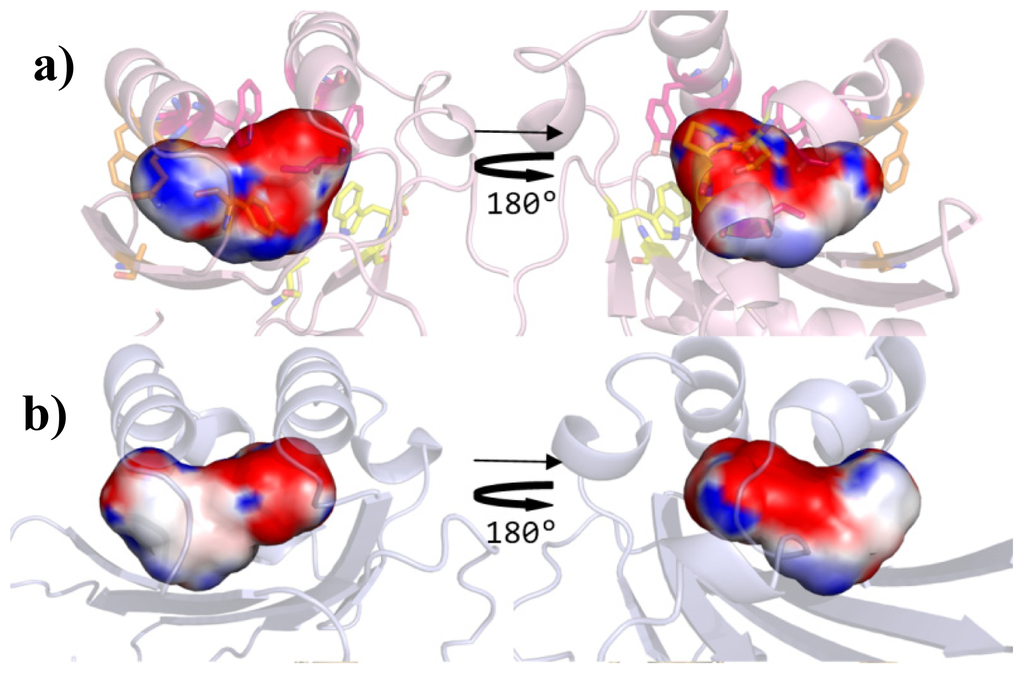 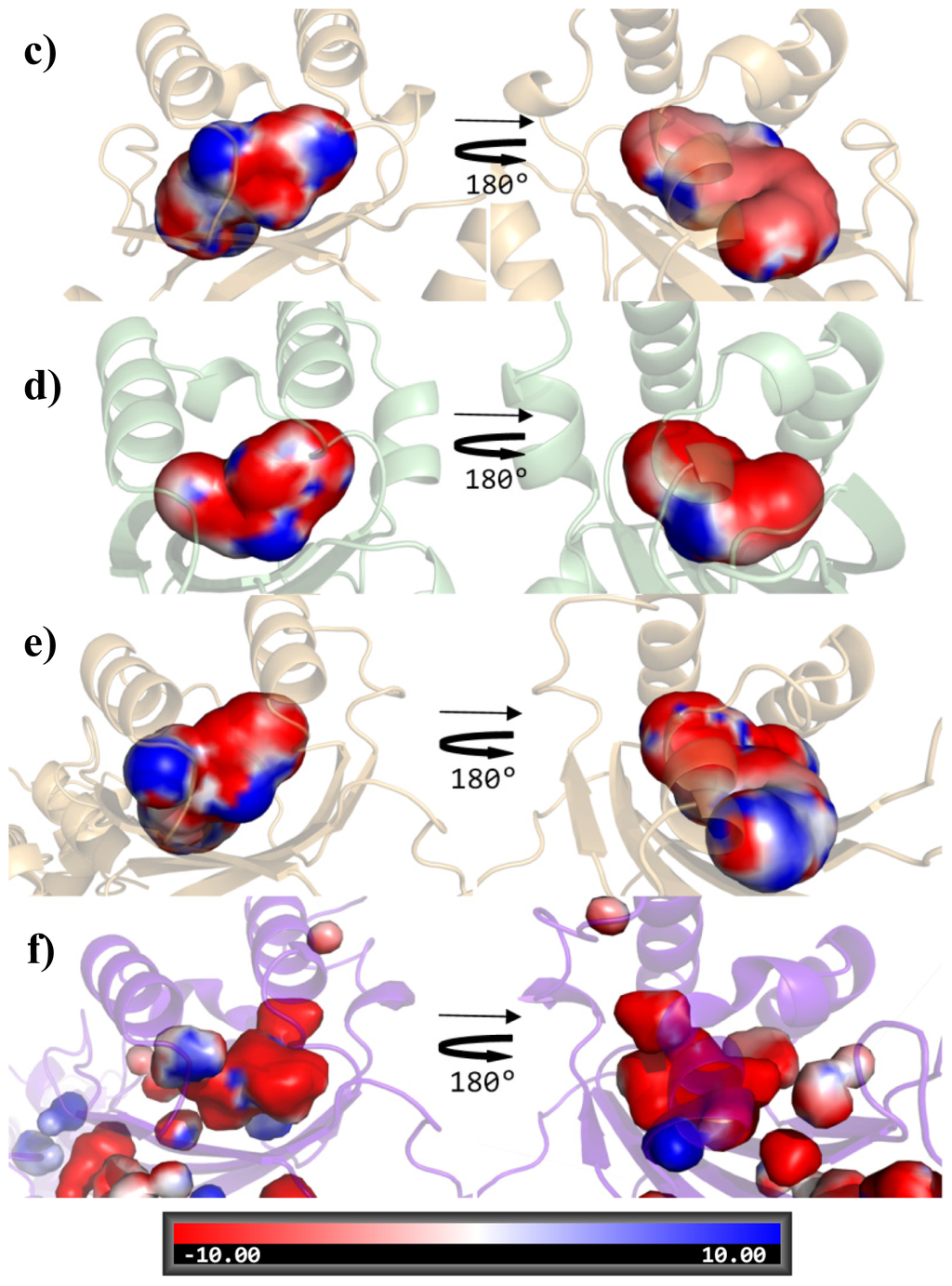 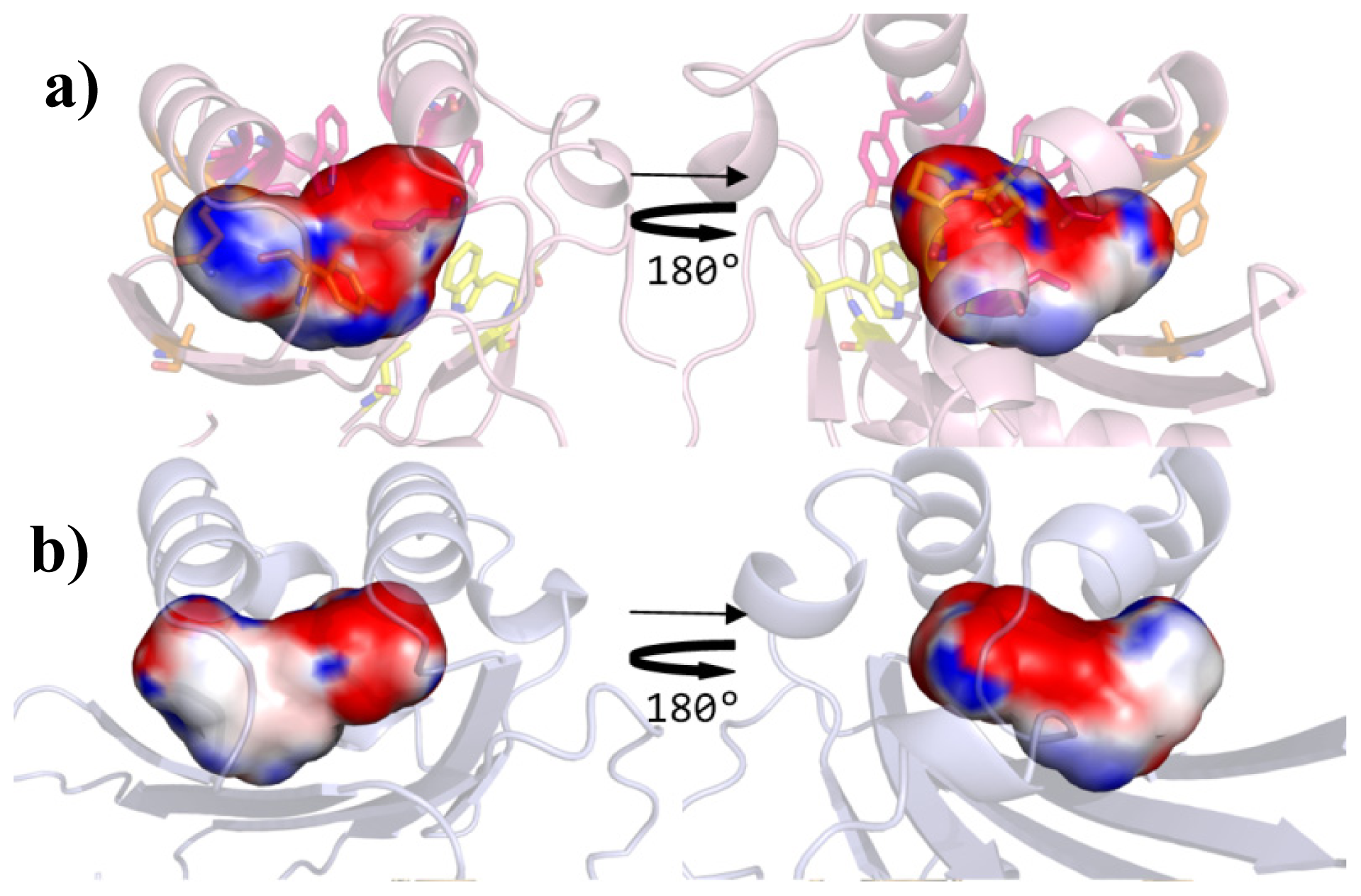 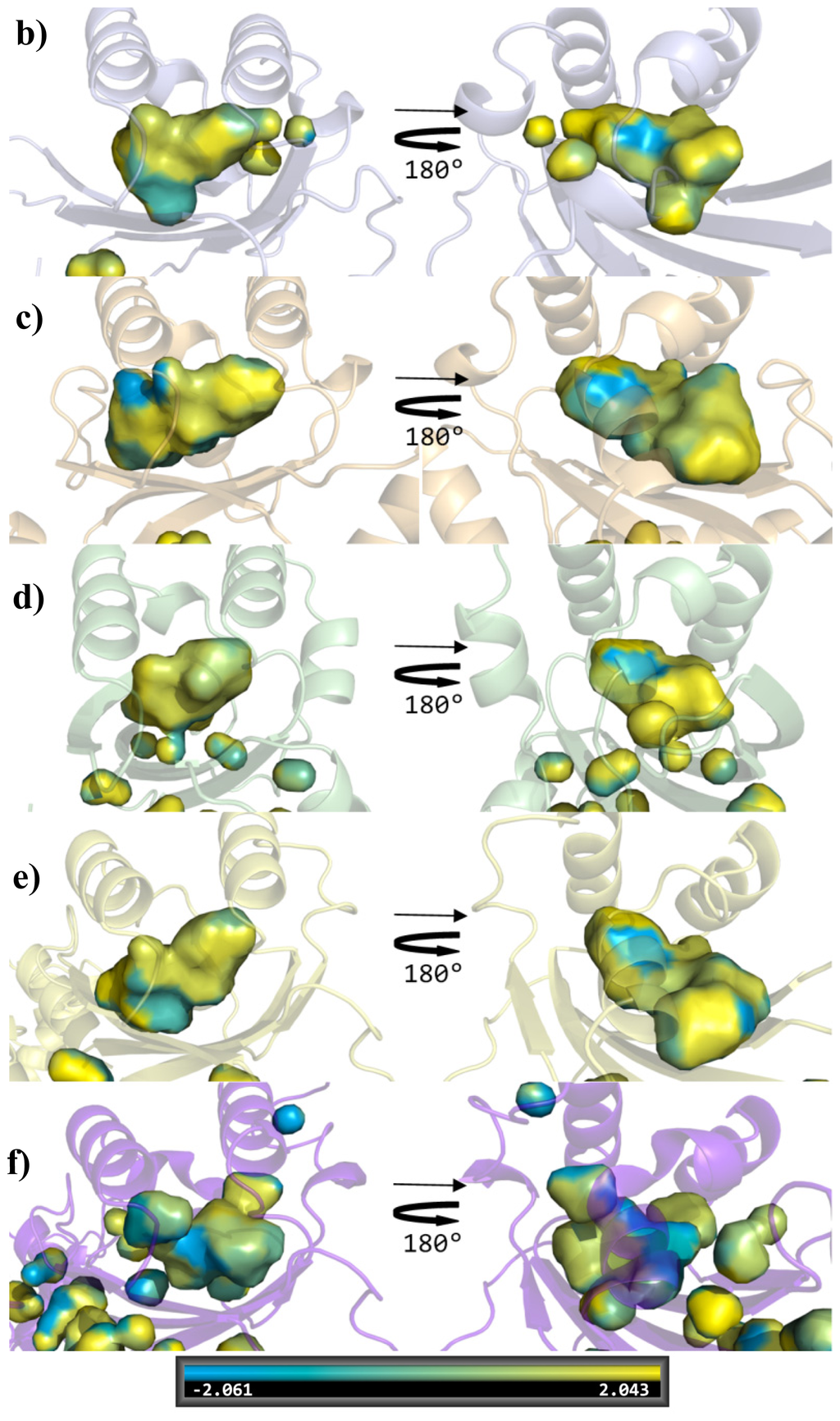 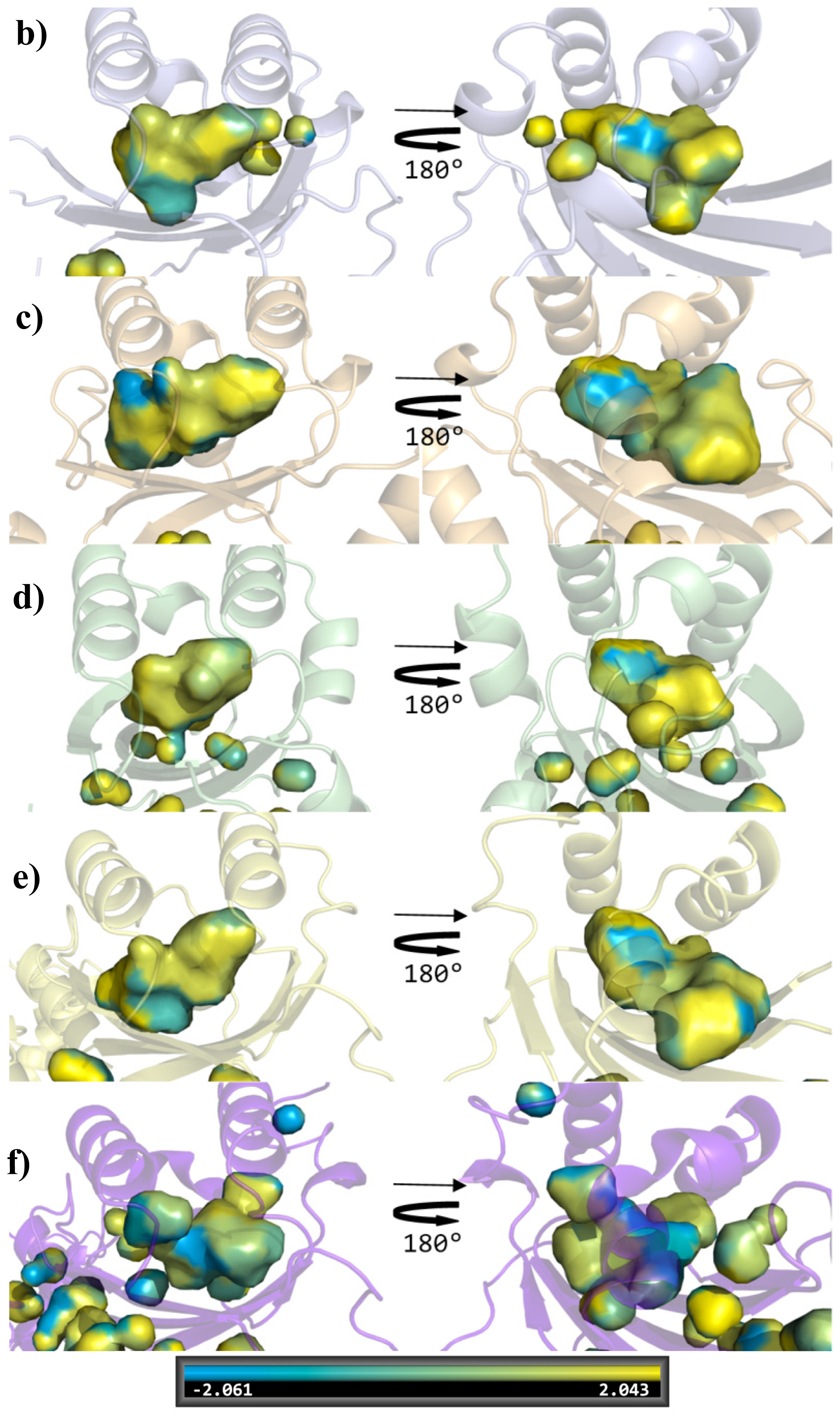 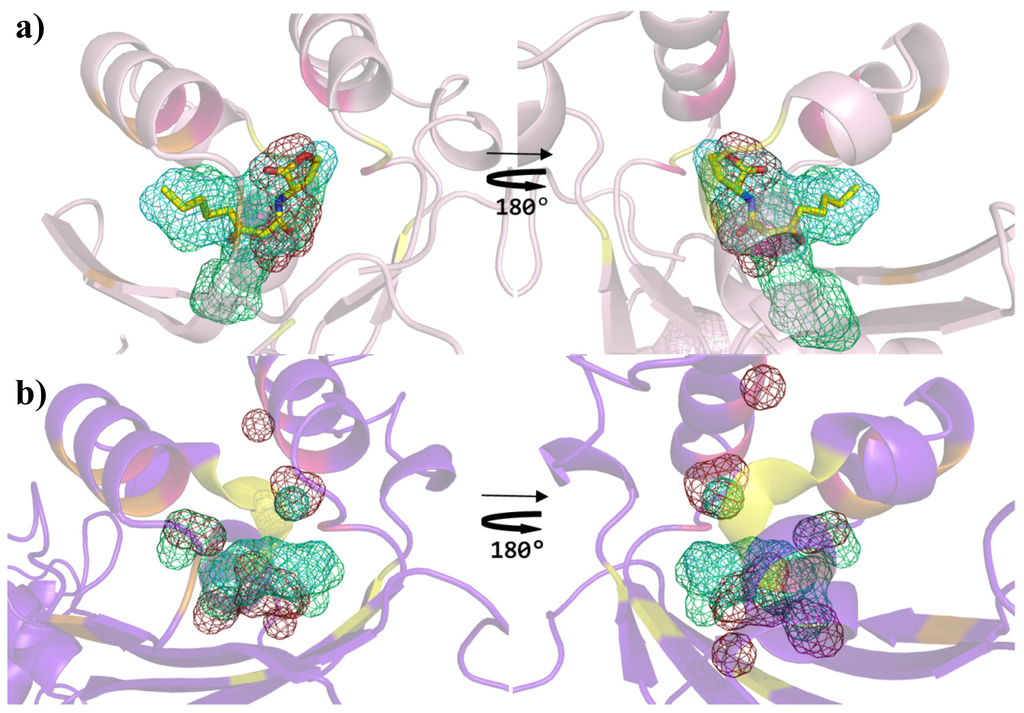 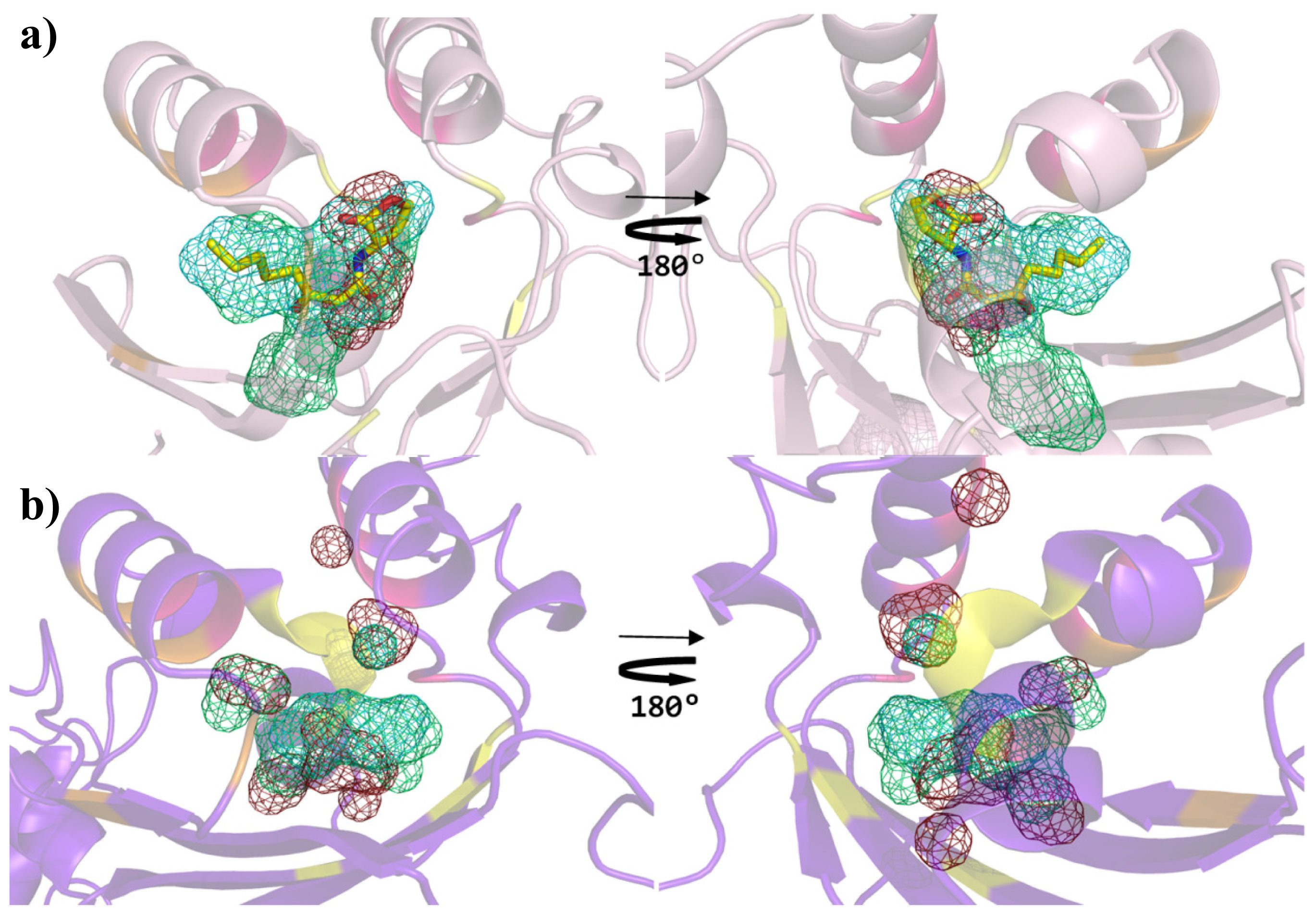 Table 1. Clusters residue type and frequency in the ligand-binding site of the regulatory domain of QS LuxRs and of the PAB LuxR solos subfamily.

Table 2. Clusters three-dimensional spatial distribution in the ligand-binding site of the regulatory domain of the QS LuxRs.

V.V.’s laboratory is funded by ICGEB core funding and by the Progetto AGER.