2.1.2. Damage to the Mouse Bone Marrow and Gastrointestinal Tract after Abdominal Irradiation

2.1.3. Changes in the Hematological Parameters and Plasma Citrulline Levels after Abdominal Irradiation

2.1.4. Treatment with Ascorbic Acid before and after Abdominal Irradiation

This study was conducted according to the guidelines of the Institutional Review Board for the Care of Animal Subjects at the National Defense Medical College, Japan.

We first measured the body thickness in mice using an X-ray image and found that it was approximately 18 ± 1 mm (Figure 8A, indicated by arrow “a”). The GI tract was also located within 13 mm from the surface of the mouse abdomen (Figure 8A, arrow “b”). To examine the precise dose of radiation exposure to the mouse abdomen, we made a special water equivalent phantom modified to match the mouse body thickness (18 mm) (Tough water WD, Kyoto Kagaku, Kyoto, Japan) (Figure 8B). We next measured the radiation dose at a point 6 mm below the surface of the simulated mouse abdomen (anterior-posterior) using a radiation dosimeter (Semiflex Ionization Chamber 31013, PTW Co., Freiburg, Germany) (Figure 8B, arrow), which was inserted in the phantom, and then adjusted the respective radiation doses (at 6–14 Gy) provided by the X-ray irradiator (MBR-1520R-3, HITACH, Tokyo, Japan).
In the animal experiments, the mice were placed in a specially designed plastic container that tightly fixed their neck and groin (Figure 8C). Subsequently, the mice were covered with a protector consisting of lead strips (a piece of strip: 1 mm in width, 5 mm in thickness) to ensure that the mouse abdomen was irradiated, while avoiding the exposure of other parts to radiation (Figure 8D, left). We confirmed that this thickness of the lead protector (5 mm) was sufficient to protect against radiation exposure by the X-ray irradiator (HITACH MBR-1520R-3). Using this protector, the irradiated area could be adjusted to various sizes and shapes by moving the lead strips (Figure 8D, right). After placing the mice in the plastic container and covering them with the lead protector, we adjusted the exposure area to the Th12–L5 levels in mice using an X-ray image (Figure 8E). Thereafter, their abdomens were exposed to radiation, given at a dose rate of 4.9 Gy/min at 150 kV and 20 mA (HITACH MBR-1520R-3). The beam was filtered through a 2 mm aluminum board.

3.4. Measurement of the Ascorbic Acid Levels in the Intestinal Tissue and Plasma

A sample of small intestine (approximately 0.7 g) was obtained from each mouse immediately after sacrifice (just before irradiation). After being washed with saline, each sample was homogenized in 5.4% metaphosphoric acid (9.8 g) and centrifuged at 10,000 × g for 15 min at 4 °C. Blood samples were obtained from the retro-orbital plexus in mice, and then plasma samples were collected by centrifugation. The ascorbic acid levels in the homogenate supernatant and plasma were measured by the SRL laboratory (Tokyo, Japan) using high performance liquid chromatography (HPLC, Shimadzu Co., Kyoto, Japan).

3.5. Pathological Examination of the Gastrointestinal Tract and Bone Marrow

Mice were euthanized to remove the gastrointestinal tract and the bone marrow, including that from the sternum, the lumbar vertebra and the femur. The gastrointestinal tract was immersed in 20% formalin for two days. The bone marrow was also immersed in 20% formalin for two days after three days of decalcification. Slides were prepared from the processed specimens and stained with hemotoxylin and eosin (H. E.).

3.6. Measurement of the Villus Height in the Intestine

The villus height was determined by measuring the distance from the base of the crypt to the villus tip in a longitudinal section of the intestine. For each mouse, 10–20 measurements of the villus height were obtained from three different tissue sections to calculate a mean height value. These mean values were then used for the statistical analysis.

3.7. TUNEL Staining of the Intestine

Mice were euthanized and sacrificed 12 h after radiation to obtain the small intestines for examination of the apoptotic cells, because radiation-induced apoptosis becomes evident at that time [33]. TUNEL (terminal deoxynucleotidyltransferase-mediated dUTP nick end labeling) staining was performed on tissue sections of formalin-fixed, paraffin-embedded mouse small intestine using an in situ apoptosis detection kit (MK500, Takara, Tokyo, Japan) [34,35]. Briefly, after deparaffinization, the slides were incubated with 10 mg/mL proteinase K at 37 °C for 15 min for antigen retrieval. Subsequently, specimen slides were placed in 0.3% H2O2 in methanol for five minutes. After they were washed with PBS, the slides were incubated with TdTenzyme at a 1:10 dilution in Labeling Safe Buffer in a moist chamber at 37 °C for 90 min. Then, slides were washed and incubated with anti-FITC HRP conjugate at 37 °C for 30 min. Reactions were visualized with 3,3′-diaminobenzidine (DAB). As a negative control, the slides were incubated with Labeling Safe Buffer alone.

Blood samples were obtained from the retro-orbital plexus of mice to measure the hematological parameters, such as the white blood cell (WBC) count, red blood cell (RBC) count, hemoglobin (Hb) levels and platelets using a hematology analyzer (PEC 170; Erma, Tokyo, Japan). The plasma citrulline levels were also measured using a fully automated amino acid analyzer (JLC-500/V2, Nihon Denshi, Tokyo, Japan). The tumor necrosis factor (TNF), interleukin (IL)-1β, and IL-6 levels in the plasma and intestinal tissue were measured using respective enzyme-linked immunosorbent assay (ELISA) kits (R & D Systems, Boston, MA, USA). The intestinal tissue protein concentrations were also assayed using a commercially available kit (Bio-Rad Laboratories, Richmond, CA, USA). Free radical metabolites in the plasma and intestinal tissue were measured using the d-ROMs test (Diacron, Grosseto, Italy) [4,36,37]. The d-ROMs test is a spectrophotometric method that assesses the overall oxidative stress by measuring the total hydroperoxide levels, because hydroperoxides are intermediate oxidative products of lipids, peptides and aminoacids. Briefly, 0.02 mL plasma was diluted in 1 mL acetate-buffered solution. Hydroperoxide groups react with the transition metal ions liberated from the proteins in the acidic medium, and are converted to alkoxyl and peroxyl radicals according to the Fenton reaction. These newly formed radicals, the quantities of which are directly proportional to those of the peroxides, are trapped chemically with 0.02 mL of a chromogen (N,N-diethyl-para-phenylendiamine), leading to the formation of the radical cation of this chromogen. The purple color resulting from this reaction over time can be monitored in a spectrophotometer (Wismarll FRAS4, Tokyo, Japan) at 505 nm. The results of this method are expressed in conventional units (Carratelli units [UCarr]). A sample of small intestine (50 mg) was obtained from the mice treated with or without ascorbic acid seven days after abdominal irradiation at 13 Gy. After being washed with saline, each sample was homogenized in 1 mL of phosphate buffered saline (PBS) and centrifuged at 10,000 × g for 15 min at 4 °C. The free radical metabolite levels in the homogenate supernatant were similarly measured using the d-ROMs test. 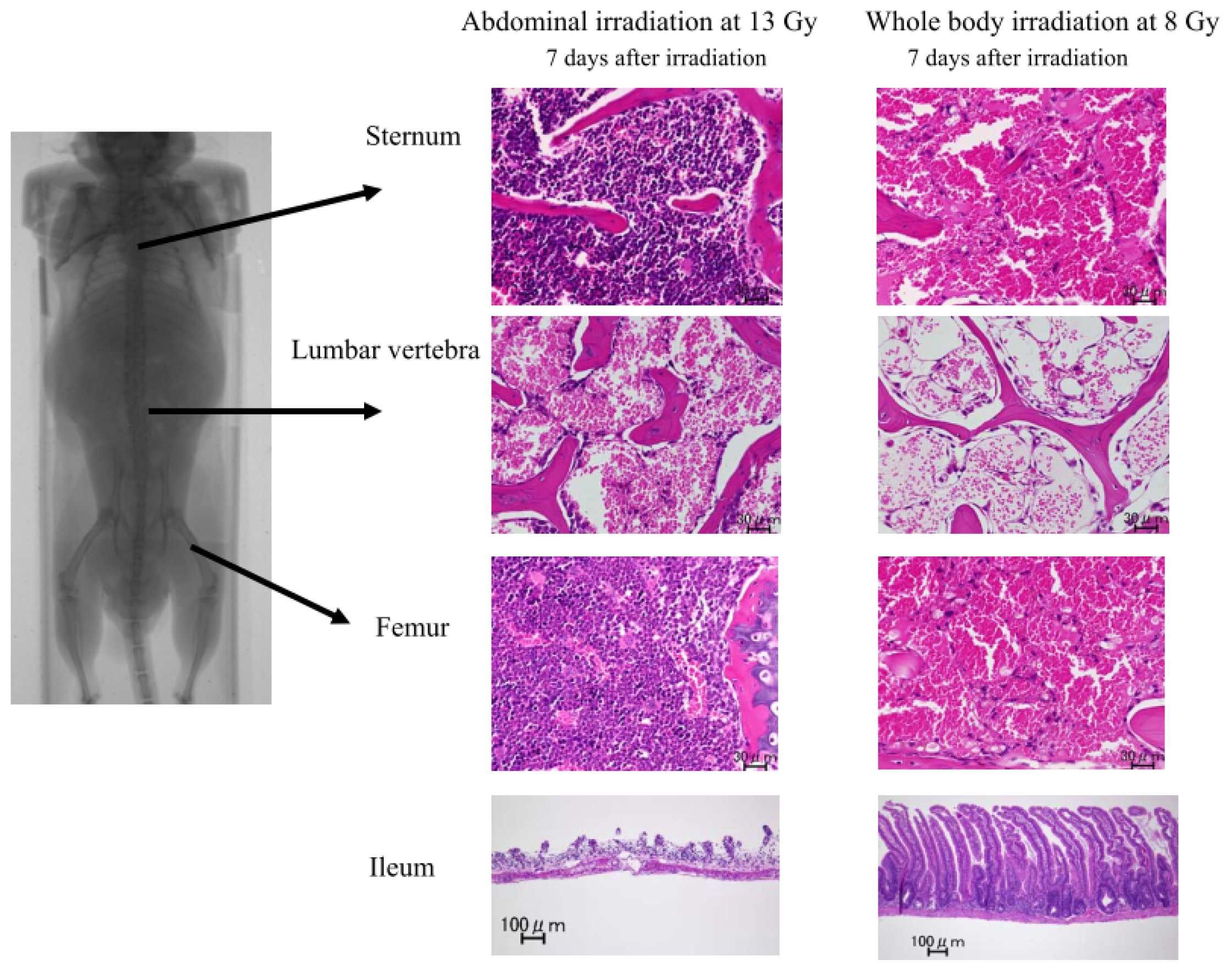 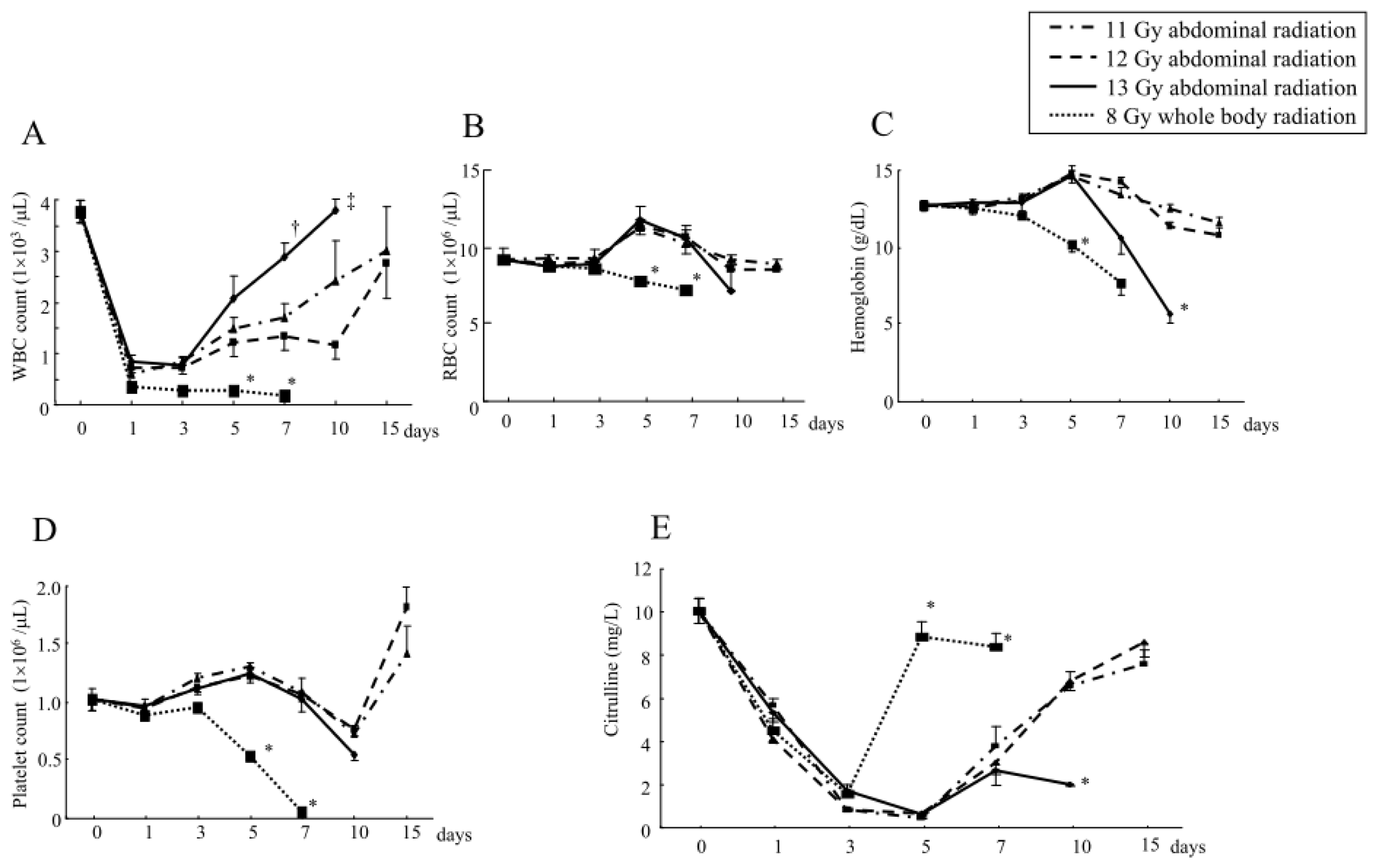 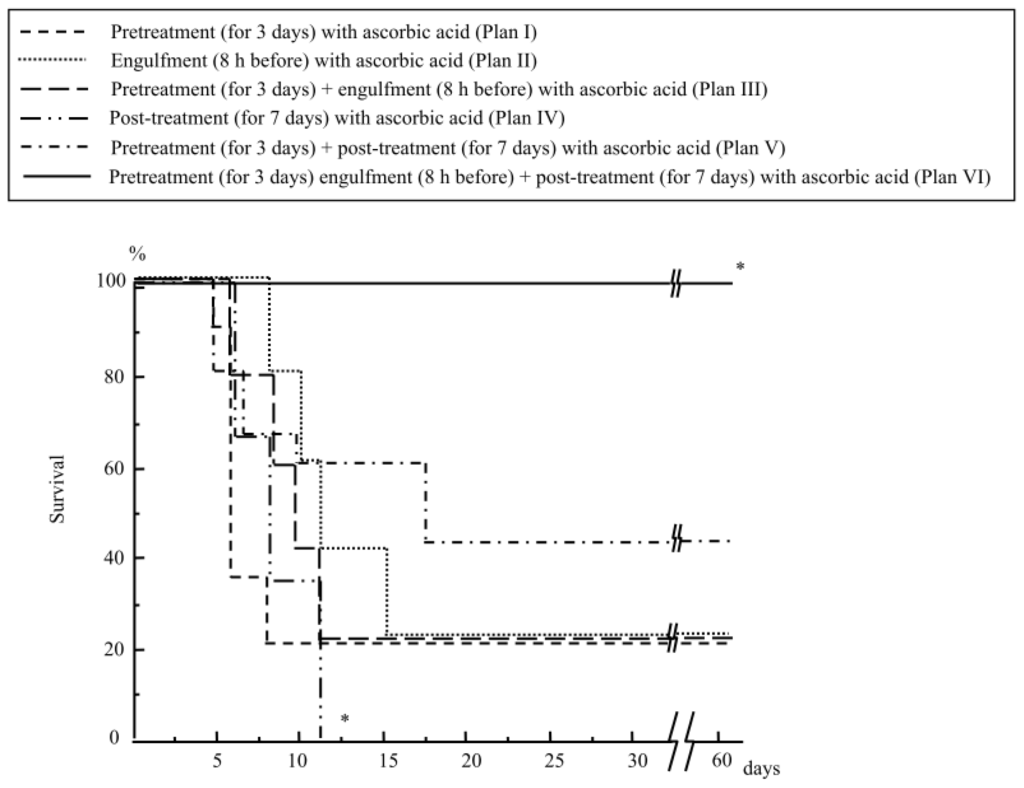 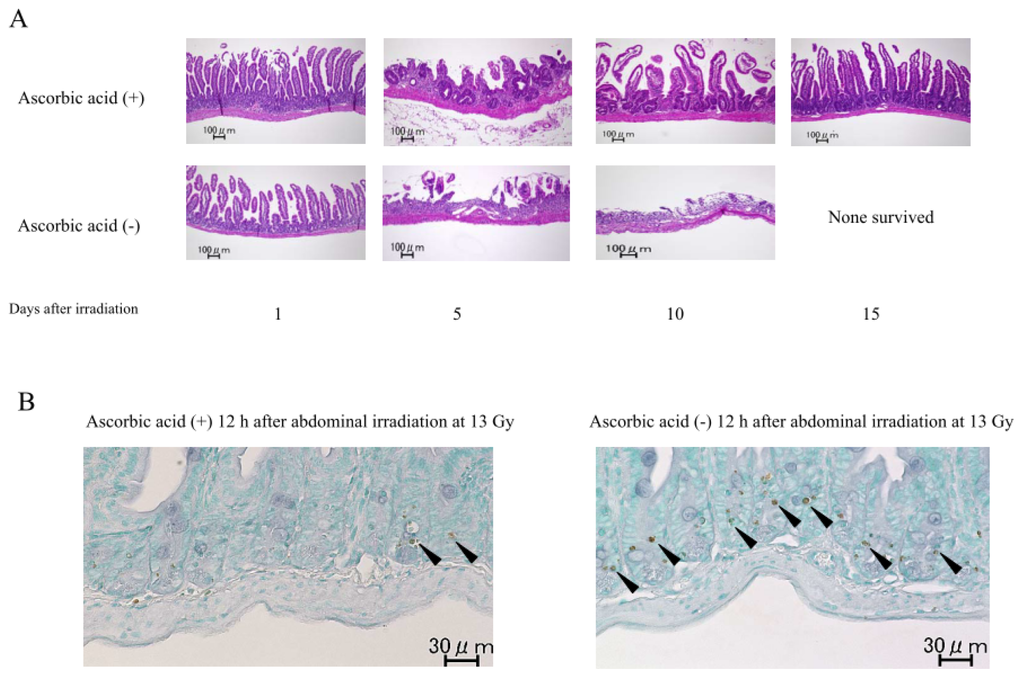 Table 1. Ascorbic acid levels in the small intestine and plasma after the treatments with ascorbic acid.
Mice received the indicated treatments with ascorbic acid. The small intestine and plasma were obtained from the mice just before radiation. Data are shown as means ± SE from n = 5 in each group.
*p < 0.01 vs. no treatment and engulfment (8 h) and p < 0.05 vs. pretreatment (3 days), and
†p < 0.01 vs. no treatment.

Table 2. The levels of free radical metabolites and cytokines in the intestine and plasma in mice seven days after radiation.
Mice were treated with or without ascorbic acid. Seven days after abdominal irradiation at 13 Gy, the small intestine (50 mg) and plasma were obtained from the mice to examine the levels of free radical metabolites, TNF, IL-1β and LI-6. Data are shown as means ± SE from n = 5 in each group.
*p < 0.01,
†p < 0.05 vs. no treatment.

This work was supported in part by a grant-in-aid for the Special Research Program (Host stress responses to internal and external factors) from the Ministry of Defense to M.K.