Electrochemically activated solutions (ECAS) are generated by electrolysis of NaCl solutions, and demonstrate broad spectrum antimicrobial activity and high environmental compatibility. The biocidal efficacy of ECAS at the point of production is widely reported in the literature, as are its credentials as a “green biocide.” Acidic ECAS are considered most effective as biocides at the point of production and ill suited for extended storage. Acidic ECAS samples were stored at 4 °C and 20 °C in glass and polystyrene containers for 398 days, and tested for free chlorine, pH, ORP and bactericidal activity throughout. ORP and free chlorine (mg/L) in stored ECAS declined over time, declining at the fastest rate when stored at 20 °C in polystyrene and at the slowest rate when stored at 4 °C in glass. Bactericidal efficacy was also affected by storage and ECAS failed to produce a 5 log10 reduction on five occasions when stored at 20 °C. pH remained stable throughout the storage period. This study represents the longest storage evaluation of the physiochemical parameters and bactericidal efficacy of acidic ECAS within the published literature and reveals that acidic ECAS retain useful bactericidal activity for in excess of 12 months, widening potential applications.
Keywords: ECAS; long term storage; physiochemical; bactericidal ECAS; long term storage; physiochemical; bactericidal

Figure 2 shows the pH of ECAS under long term storage with the inset graph displaying the same data on a limited pH scale of 1.2 to 2.0. Despite the decline in ORP over the same time period, the pH of ECAS remained stable over 398 days, irrespective of storage conditions.

ECAS was produced from a saturated sodium chloride solution and softened mains water in an electrochemical cell (Bridge Systems Ltd.: Fife, UK) at a rate of 200 mL/min from the anodic chamber and 400 mL/min from the cathodic chamber. ECAS was produced at an ORP of 1183.1 mV, a pH of 1.37 and a free chlorine concentration of 570 mg/L. ECAS was collected in two sets of containers; 30 mL thick-walled glass Universal bottles with rubber-sealed aluminium screw caps, and 30 mL polystyrene Universal bottles with high density polyethylene screw caps. The containers were filled sufficient to exclude air, sealed and stored under dark conditions at either 4 °C or 20 °C. At the every time point, three samples of ECAS stored under each of the four conditions were analysed for ORP, pH, free and total chlorine and tested for bactericidal activity.

At each time point, three ECAS samples stored in glass and plastic at 4 °C and 20 °C were subjected to a modified version of EN 1040:2005, Staphylococcus aureus ATCC 6538 was removed from the regimen as previous research had shown it to be more susceptible to the bactericidal activity of ECAS than P. aeruginosa ATCC 9027 (data not shown). A dilution-neutralization assay was undertaken in accordance with EN 1040:2005. A stock culture of P. aeruginosa ATCC 9027 was streaked onto Tryptone Soya Agar (TSA; Oxoid: Basingstoke, UK) and incubated at 37 °C for 18–24 h. A single, isolated colony was subcultured onto TSA for 18–24 h. Colonies were suspended in diluent (1 g/L Tryptone, 8.5 g/L NaCl) to a density of 1.5–5 × 108 cfu/mL (test suspension). 1 mL of test suspension and 1 mL water were added to a Universal bottle and incubated at 20 °C for 2 min ± 1 s. 8 mL of stored ECAS (equilibrated to 20 °C) was added for a contact time of 5 min ± 10 s followed by immediate removal to neutralizer (Letheen Broth, BD: Oxford, UK) for 5 min ± 10 s. Duplicate 1 mL volumes were transferred directly from the neutralizer and from 10-fold dilutions made into diluent, to a sterile petri dish. Twenty microliters melted TSA cooled to 45 °C was added to each petri dish. Plates were incubated at 37 °C and counted at 24 and 48 h with the higher number used for biocide evaluation.

An analysis of variance (ANOVA) was performed (GraphPad Prism 5.03, GraphPad Software Inc.: La Jolla, CA, USA), followed by Dunnett’s multiple comparison test against a chlorine level of 0.0 mg/L with a P value of <0.05 being regarded as significant in order to determine at what time point the free chlorine levels within the stored ECAS became not statistically different from zero.

This study represents the longest evaluation of the physiochemical parameters and bactericidal efficacy of ECAS within the published literature and reveals that acidic ECAS retains useful bactericidal activity for significantly longer than has been previously demonstrated and may have applications beyond those previously considered. The potent antimicrobial activity of ECAS at the point of production is widely reported in the literature, as are its credentials as a “green biocide”. Our study demonstrates that ECAS may be suited to situations where generation at the point of use is not possible due to cost or resource limitations. Furthermore, we have shown that ECAS is bactericidal in the absence of measurable chlorine. This furthers our understanding of the mechanism of action of these solutions, strongly suggesting that there are multiple biocidal components working in combination [43] rather than the antimicrobial activity being exclusively due to the presence of HOCl. Now that it has been demonstrated that ECAS can retain basic bactericidal activity for over 12 months in storage, it would be of benefit to further investigate how extended storage of this type affects the kill kinetics and antimicrobial spectrum compared to ECAS used at the point of production. 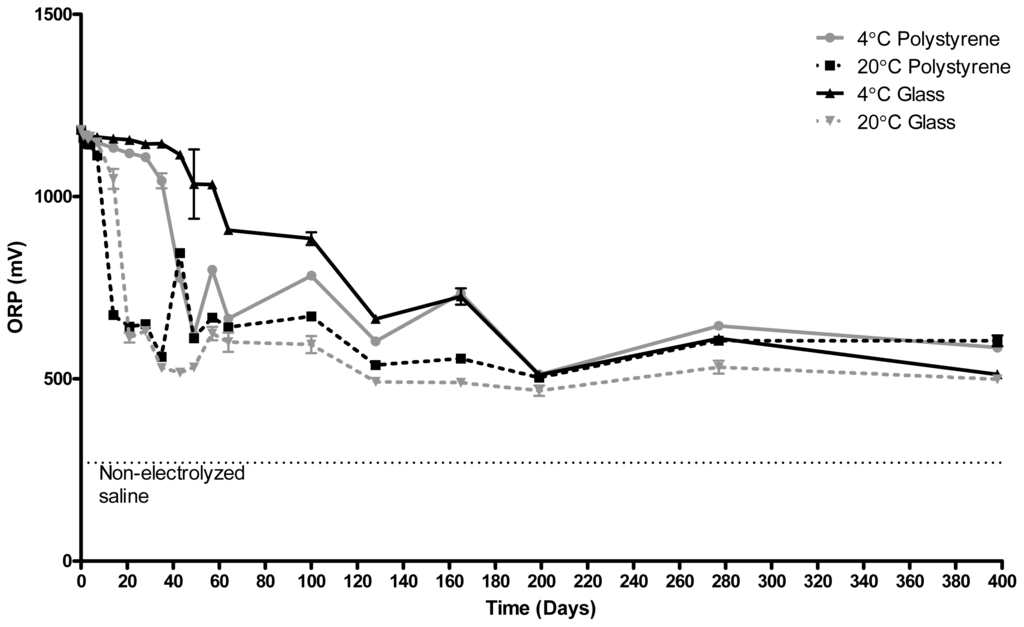 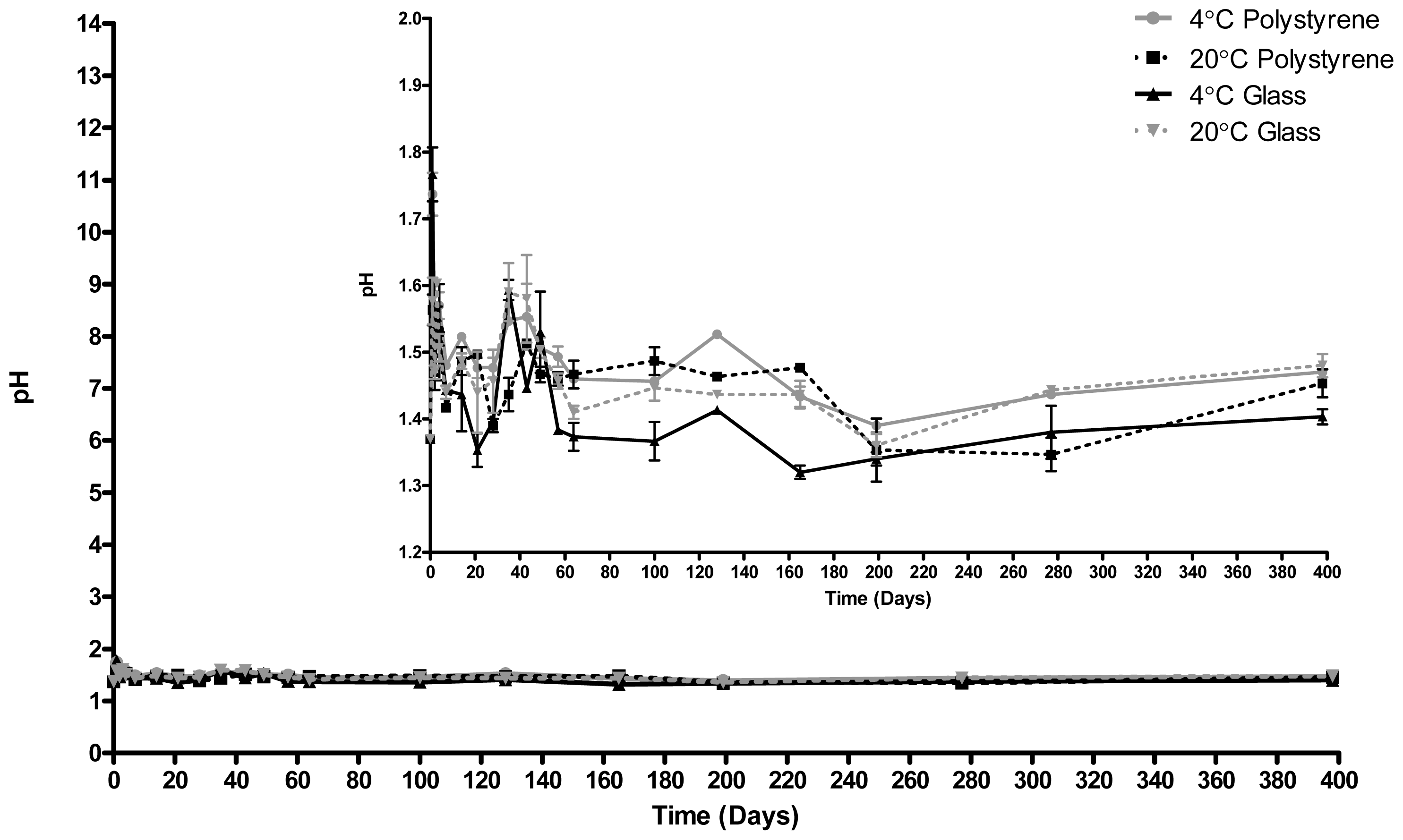 © 2013 by the authors; licensee Molecular Diversity Preservation International, Basel, Switzerland. This article is an open-access article distributed under the terms and conditions of the Creative Commons Attribution license (http://creativecommons.org/licenses/by/3.0/).