Detection of Differential Levels of Proteins in the Urine of Patients with Endometrial Cancer: Analysis Using Two-Dimensional Gel Electrophoresis and O-Glycan Binding Lectin

Thermal Studies of Zn(II), Cd(II) and Hg(II) Complexes of Some N-Alkyl-N-Phenyl-Dithiocarbamates

Dithiocarbamates are S, N containing ligands, which display a rich and varied coordination chemistry with a wide range of transition and main group metal complexes [1]. The chemistry of these compounds has aroused special interest because of the analytical purpose, as well as their industrial applicability [2,3]. Their metal complexes present striking structural features and have diversified applications, such as high pressure lubricants in industry, fungicides and pesticides, and also as accelerators in vulcanization [4]. Dithiocarbamate complexes constitute one of the most promising species to provide single-source materials for bulk metal sulfides [5,6]. Dithiocarbamates have also found important use in medicine as anti-alcoholic drug [7], anticancer [8], and recently as co-adjuvant in AIDS treatment [9]. This is related to their strong metal binding capacity, hence could act as inhibitors of enzymes [10]. Thermo analytical methods are of great interest due to their wide applicability in the industrial processes that involves the thermal decomposition reactions of solids [11,12]. Hence research in this area has gained increased attention [13].
The thermochemistry of metal dithiocarbamates has been widely studied in the past years but little is known about their thermal decomposition kinetics [14–16]. The TGA revealed that generally these complexes either volatilize leaving a negligible amount of residue or decompose to yield metal sulphide [17]. Most of the dithiocarbamates studied are prepared from aliphatic amines [18] and little is known about the thermal studies of the alkyl-aryl dithiocarbamates. The aim of this work is to study the thermal and kinetic behavior of N-alkyl-N-phenyl dithiocarbamate complexes of Zn(II), Cd(II) and Hg(II) (alkyl = ethyl and butyl) using the non-isothermal method.

Thermogravimetric (TG), differential thermogravimetric (DTG) and differential scanning calorimetric (DSC) analysis were carried out for the complexes under nitrogen flow. Figures 1–3 show the TG/DTG/DSC curves for all the complexes, while Table 1 contains the maximum temperature values for decomposition along with corresponding weight loss values.
The TGA curves indicate that the loss of weight starts around 220 °C for the zinc complexes, and at much higher temperature for the cadmium complexes. The two mercury complexes show a wide difference in their onset decomposition temperature. While bis(N-ethyl-N-phenyl dithiocarbamate) mercury (II) commenced decomposition around 180 °C, bis(N-butyl-N-phenyl dithiocarbamate) mercury (II) remained stable until about 211 °C. The decomposition continues to about 360 °C at which point most of the organic part of the compounds have been lost. This sharp decomposition period brings about 73%–76% weight loss in the zinc complexes, 66%–70% weight loss in the cadmium complexes and 57%–80% weight loss in the mercury complexes; and led to the complete formation of sulphide [19]. Zinc (II), cadmium (II), and mercury (II) diethyldithiocarbamates represent a class of volatile dithiocarbamates yielding the corresponding metal sulphide at about 623 °C [20,21]. We have noticed a shorter decomposition temperature for these complexes and this could be ascribed to the effect of the aryl group. The mercury complexes show three decomposition peaks in the thermogram. The first decomposition peak, which has the highest weight loss, corresponds to the formation of the HgS. In accordance with stoichiometric calculation, the product of the second decomposition step for the mercury complexes is possibly sulphur. The DTG indicate the high volatility of the first decomposition product (HgS), in this temperature region. The literature reports support the identification of the volatile decomposition product as Hg vapour and sulphur. Hardy, et al. [22] has reported that the product of HgS heated in the air is mercuric oxide, which decomposes to mercury vapour and oxygen at about 500 °C. Also, in a process sometimes referred to as reactive sublimation, the decomposition of HgS has been identified to proceed according to the chemical reaction:
The third peak around 550 °C could be ascribed to the oxidation of the sulphur to sulphur dioxide (SO2). By comparing the TG and DSC curves, it showed that the thermal decomposition began at temperatures higher than the melting point of the compounds, and so occurred in the liquid phase. This occurred in a single-step process as suggested by the DTG curves. Certain factors may be said to be responsible for the slight difference in the weight values of the end product (Table 1). The presence of oxygen and sulphur in the end product of the zinc and cadmium complexes at 800 °C, as shown by the EDX result, may indicate oxysulphate which probably have formed due to the oxidation of the sulphide.
The complexes showed similar behaviours in the DSC. There are two sharp endothermic peaks between 200 °C–320 °C and one broad exothermic peak between 400 °C–550 °C, except in the mercury complexes where small exothermic peaks are observed at 398 °C and 378 °C for HgL12 and HgL22 respectively. An additional broad peak is observed at 507 °C for HgL12. The first endothermic peaks correspond to the melting of the complexes while the second represent their decomposition to form the respective metal sulphides. A striking feature of the DSC peaks is the progressive decrease in temperature with increase in number of the carbon atoms of the alkyl substituent for a particular metal ion. This trend is also observed down the group (Zn < Cd < Hg) and could be ascribed to the increase in molecular weight and also, the increase in the size of the central metal ion respectively. A reduction trend is also observed in the broad exothermic peaks of the zinc and cadmium complexes. The broad exothermic peaks may presumably be due to the oxidation of the metal sulphides to metal oxide (ZnO, CdO, and HgO) [23]. It is apparent that two different steps of decomposition are associated with the degradation of the complex and the residue, the later being an oxidation reaction. The DSC curves show that before the volatilization of the mercury complex, oxidation did actually occur. From the results of the TGA and DSC, one can recognize the order of decreasing stability of the complexes as follows: Cd < Zn < Hg.
The probable decomposition pattern for the zinc and cadmium complexes could be schematically represented as shown in scheme 1.

The synthesis and characterization of the ligands, N-ethyl-N-phenyl dithiocarbamate [(C2H5)(C6H5)NCS2-] and N-butyl-N-phenyl dithiocarbamate [(C4H9)(C6H5)NCS2-]; and their respective metal complexes [((C2H5)(C6H5)NCS2)2M] and [((C4H9)(C6H5)NCS2)2M] (M = Zn, Cd and Hg) studied in this work are described in detail elsewhere [24]. The ligands were prepared under ice temperature while the metal-complexes reported were prepared by the reaction of their respective metal chlorides with the ligands in 1:2 molar ratios in aqueous solution at room temperature.

Perkin Elmer thermogravimetric analyzer (TGA 7) equipped with a thermal analysis controller (TAC 7/DX) was utilized. For each experiment, around 10–12.00 mg of the prepared complexes sample was used. The heating rate was 10 °C·min−1, the temperature ranging from 20 °C to 800 °C and the purge gas was nitrogen maintained at a flow rate of 20 mL·min−1. The differential-scanning calorimetry at high temperature was performed with a Thermo scientific DSC (i–series) instrument for temperatures ranging from 20 to 600 °C at a rate of 5 °C·min−1, in nitrogen atmosphere.

The SEM images were obtained in a Jeol, JSM-6390LV apparatus, using an accelerating voltage between 15–20 kV at different magnifications. Composition and energy dispersive spectra were processed using energy dispersive X-ray analysis (EDX) attached to the SEM with Noran System six software. For the EDX analysis, an accelerating voltage of 20.0 KV and magnification of 1000 were used. 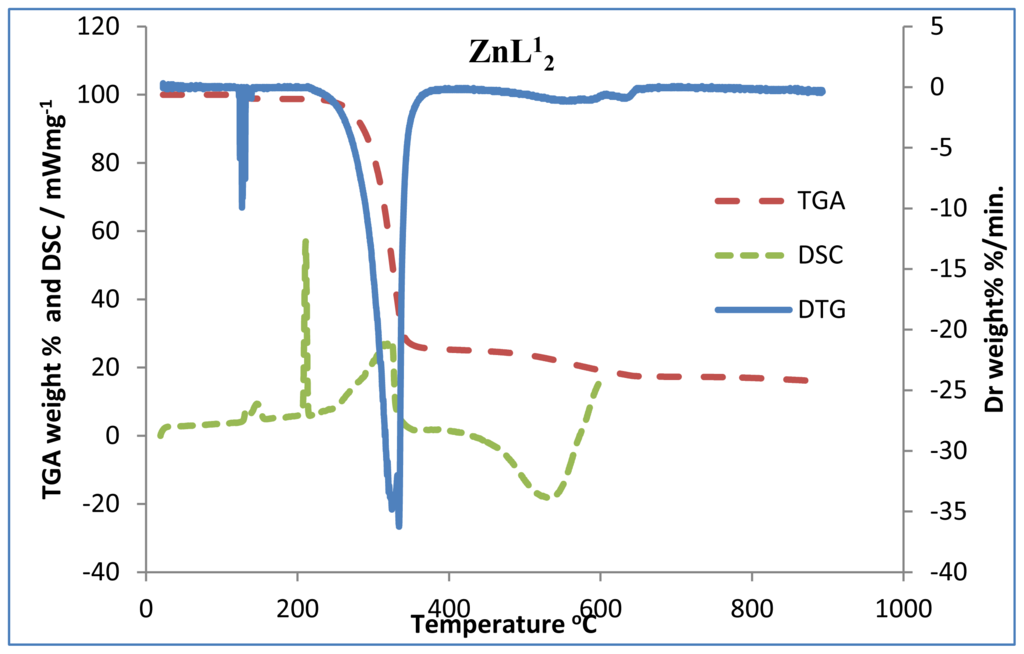 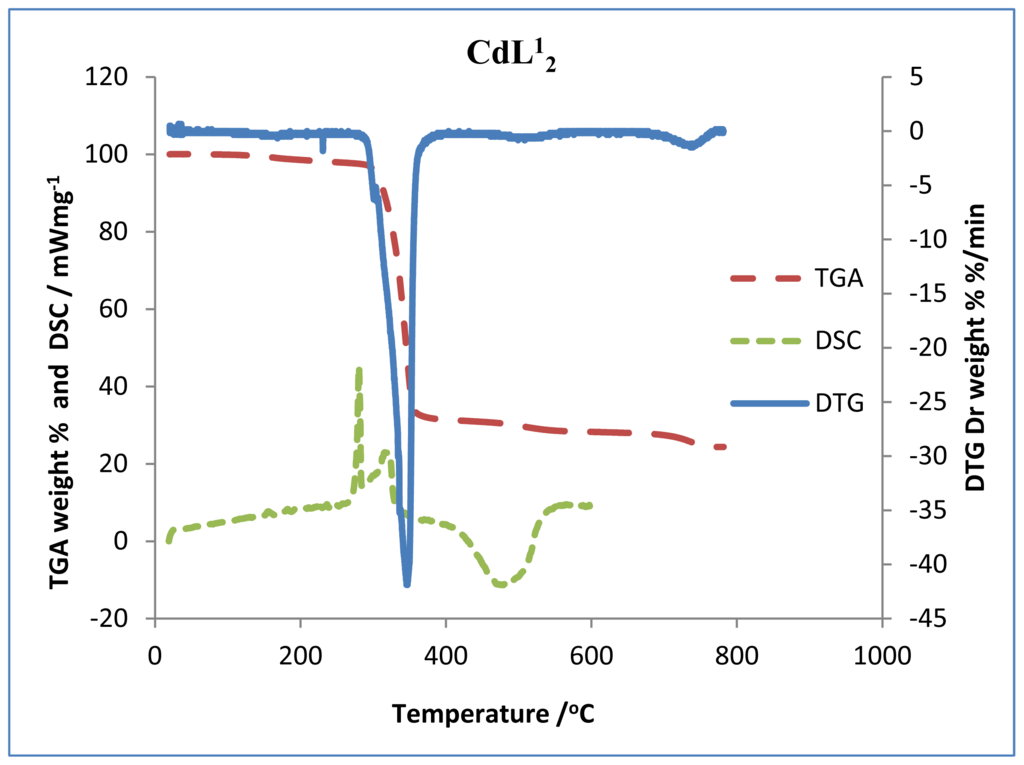 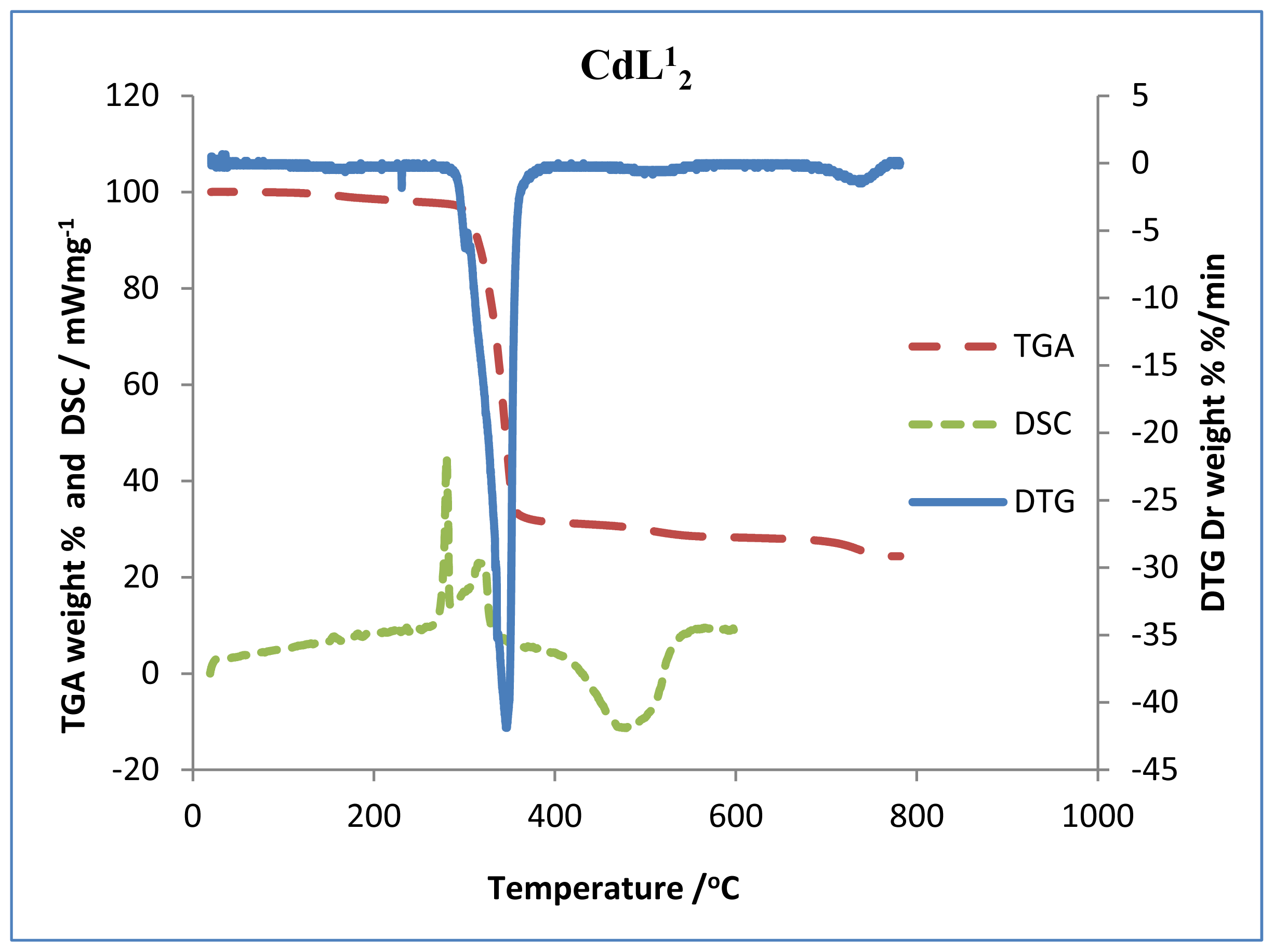 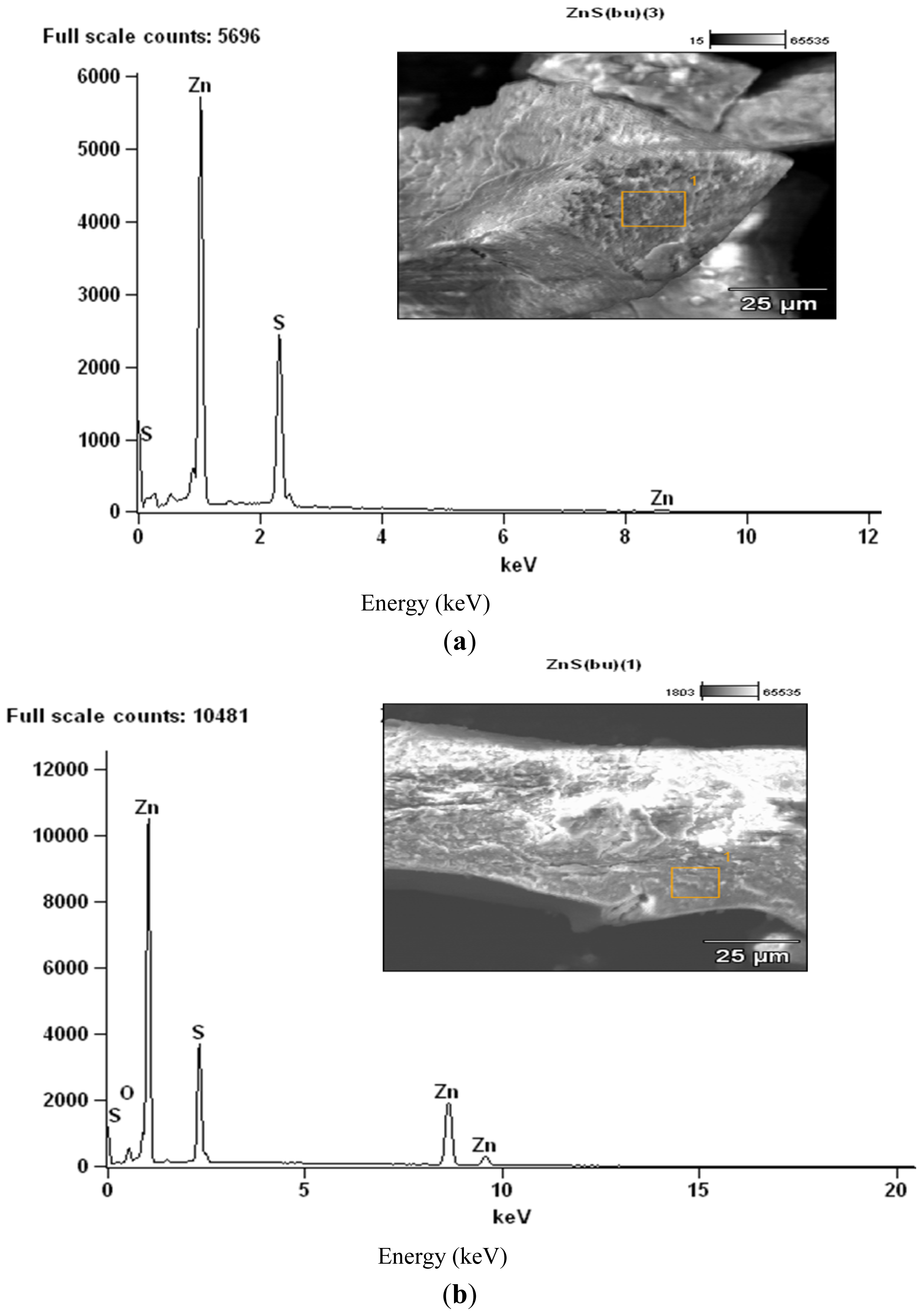 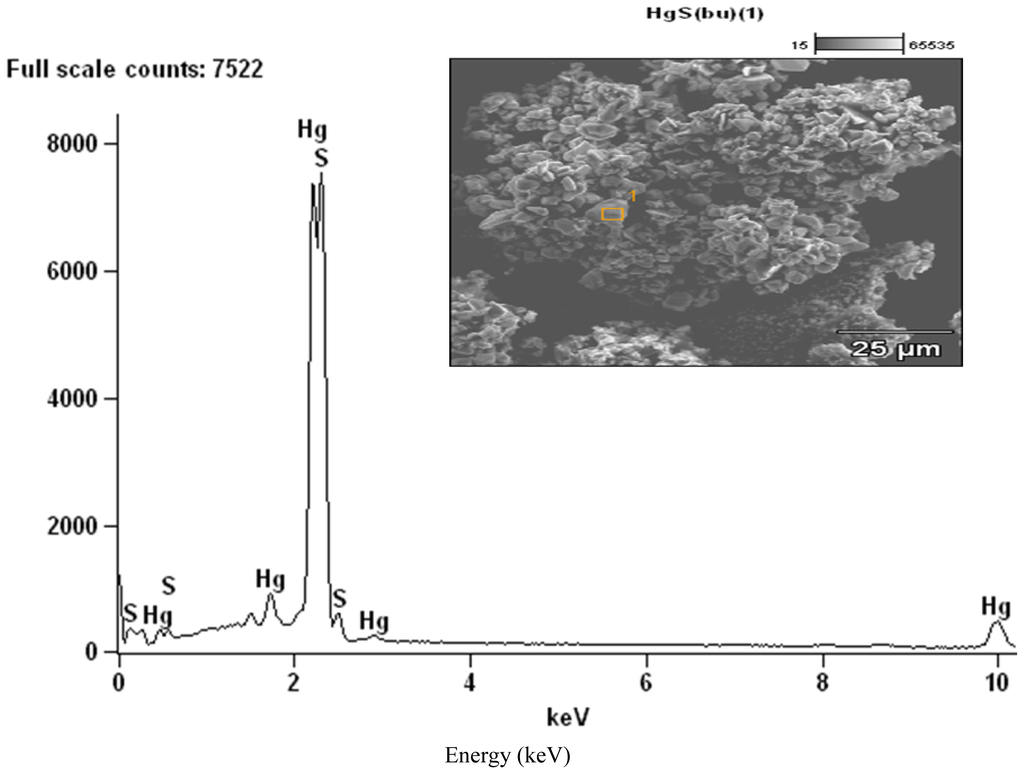