Eight substances that are main components of the essential oils from three Mediterranean aromatic plants (Verbena officinalis, Thymus vulgaris and Origanum vulgare), previously found active against some phytopathogenic Fungi and Stramenopila, have been tested in vitro against five etiological agents of post-harvest fruit decay, Botrytis cinerea, Penicillium italicum, P. expansum, Phytophthora citrophthora and Rhizopus stolonifer. The tested compounds were β-fellandrene, β-pinene, camphene, carvacrol, citral, o-cymene, γ-terpinene and thymol. Citral exhibited a fungicidal action against P. citrophthora; carvacrol and thymol showed a fungistatic activity against P. citrophthora and R. stolonifer. Citral and carvacrol at 250 ppm, and thymol at 150 and 250 ppm stopped the growth of B. cinerea. Moreover, thymol showed fungistatic and fungicidal action against P. italicum. Finally, the mycelium growth of P. expansum was inhibited in the presence of 250 ppm of thymol and carvacrol. These results represent an important step toward the goal to use some essential oils or their components as natural preservatives for fruits and foodstuffs, due to their safety for consumer healthy and positive effect on shelf life extension of agricultural fresh products.
Keywords: fungitoxic activity; monoterpenes; plant essential oils; post-harvest diseases fungitoxic activity; monoterpenes; plant essential oils; post-harvest diseases

The most important plant pathogens, i.e., fungi (s.l.), bacteria, phytoplasmas and viruses, can cause considerable economic damages to plant products. Among them, fungi (s.l.) constitute the more numerous group of plant pathogens and can often cause severe diseases in vegetable and fruit species [1]. Over several decades, various attempts have been accomplished to prevent, control, or eradicate plant diseases, and development of synthetic fungicides was particularly investigated [2]. These pesticides are known to be highly effective in controlling various postharvest diseases of vegetables and fruits. Although effective, their continued or repeated applications may disrupt equilibrium of ecosystems, leading to dramatic disease outbreaks, widespread development of pathogens resistant to one or more chemicals, toxicity to non-target organisms and environmental problems [2]. Sometimes, they accumulate in the food chain as residues above safe limits [3]. Furthermore, pesticide residues in food possess more carcinogenic risks than insecticides and herbicides [2]. A noticed decrease in pesticide efficacy, along with increased concern about the environmental effects of currently used fungicides as well as dramatic reduction of the marketable ones due to recent European laws, have highlighted the need to develop alternative control strategies or innovative crop protection and postharvest methods of fruit rot control with reduced use of conventional fungicides or without synthetic chemicals at all [4].
Research on plant-derived fungicides is now being intensified, as it became evident that these substances have enormous potential to improve the future agrochemical technology. In fact, there are good reasons to suppose that secondary plant metabolism has naturally evolved to actively protect vegetable and fruit species from microbial pathogen attacks [4]. Since secondary plant metabolites are often active against a small number of specific target microorganism species and are biodegradable to nontoxic products, they are potentially useful in integrated pest management programs: moreover, they could allow to develop a new class of possibly safer disease control substances. Therefore, efforts have been focused on secondary plant metabolites for their potential use as commercial fungicides or as lead compounds [5].
Among secondary plant metabolites, plant essential oils (PEOs) may provide potential alternatives to active substances currently used to control phytopathogenic fungi (s.l.), since they are not only a fragrance and flavour source for food and beverages but are also being discovered as bioactive substances tanks [6].
Several investigations have been carried out abroad in this field toward antimicrobial and fungicidal PEOs properties [3,7–11]. In particular, PEOs use to control postharvest fruit and vegetable diseases have been studied and are nowadays well documented [12–15]. In Italy, in addition to research carried out by Conte et al. [16] and Zambonelli et al. [17], more recently studies on the potential fungicidal activity of 12 PEOs from Mediterranean aromatic plants against five postharvest fungal (s.l.) pathogens of orange fruits, were accomplished by our research group [18]. Results of this research showed that PEOs from Verbena officinalis L., Thymus vulgaris L. and Origanum vulgare L. could be used as a possible source of ecofriendly botanical fungicides for controlling important postharvest fungal pathogens without phytotoxicity risk. Furthermore, it seemed believable that PEO volatile components could be employed to uniformly permeate storeroom air and protect, maybe better than fungicides commonly used for this goal, fruits that are in storage. Therefore, it seemed opportune to assay the in vitro fungicidal activity of the above mentioned PEO main components against five fungi (s.l.) well known as postharvest fruit decaying agents.

β-Fellandrene, β-pinene, camphene, carvacrol, citral, o-cymene, γ-terpinene and thymol were purchased from Sigma Aldrich, Co. (Milan, Italy). All the above compounds were kept at −20 °C.

The possible fungistatic or fungicidal activity of the single PEO components against (a) P. citrophthora, B. cinerea and R. stolonifer and (b) P. italicum and P. expansum was determined in two ways. (a) By putting single 3-mm-thick and 0.5-cm-diameter CMA or PDA plugs, axenically taken away from peripheral portion of basic colonies onto central part surface of 9 cm diameter Petri dishes containing PDA or CMA previously added, at 40 °C, of 0.2% Tween-20 and 50, 150 or 250 ppm of the single PEO components; (b) By dropping, under axenic conditions, 10 μL aliquots of single suspensions containing 1 × 104 conidia/mL of the single Penicillium species onto surface centre of Petri dishes containing PDA and prepared with the same percentage of Tween-20 and the single three PEO component concentration. Three replicates for each tested PEO active compound dose were provided in presence of opportune controls, i.e., PDA and CMA plugs from basic colonies of P. citrophthora, B. cinerea and R. stolonifer and of the two Penicillium species transferred or dropped, respectively, as above into Petri dishes containing either sole PDA or CMA or PDA or CMA added of 0.2% tween 20.
The inhibitory effects of PEO components against each tested microorganism belonging to Stramenopila or Fungi kingdoms was determined after a 3–10 days incubation period at room temperature, e.g., when control colonies margins reached plate edges. The shortest and longest colony diameters were measured for each fungal or stramenopilus culture and the average value obtained, considered as a growth index, was subjected to statistical analysis.

3.4. Evaluation of Fungicidal Effect of Some PEO Components

PDA plugs of B. cinerea and R. stolonifer and CMA plugs of P. citrophthora from Petri dishes, prepared with PEO compound concentrations which seemed to have completely inhibited growth of tested microorganism isolates, were axenically transferred into Petri dishes containing only PDA, in the case of the first two fungi or CMA for P. citrophthora. Similarly, plugs axenically excised from central portion of dishes in which growth of P. expansum and P. italicum seemed to have been stopped by some PEO component concentrations, were in the same way put on PDA. Inoculated plates were then transferred in a climatic chamber at 20 ± 1 °C, along with the opportune controls, i.e., Petri dishes containing PDA or CMA inoculated with agar plugs taken from basic colonies of the above phytopathogenic microorganisms. All plates were daily observed for 30 days to ascertain eventual mycelium growth.

Data were statistically processed and subjected to analysis of variance (ANOVA). Means significantly different were separated by the least significant difference (LDS) with p < 0.01.

The achieved results, along with fact that essential oil poisoning is documented for a few of these volatile compounds often inappropriately used [19], constitute an interesting knowledge acquirement on the perspective of using PEOs as natural preservatives for food-stuff and stimulate to undertake in vivo studies to verify the possible phytotoxic effects of the above PEO active compounds and to set up an application method able to maximize their effect against target post-harvest rot causal agents [15]. On the other hand, it is important to consider that the intense smell of the PEOs’ components can limit their use in foods; in fact their perception by the consumer will stimulate technological studies in order to solve this problem. 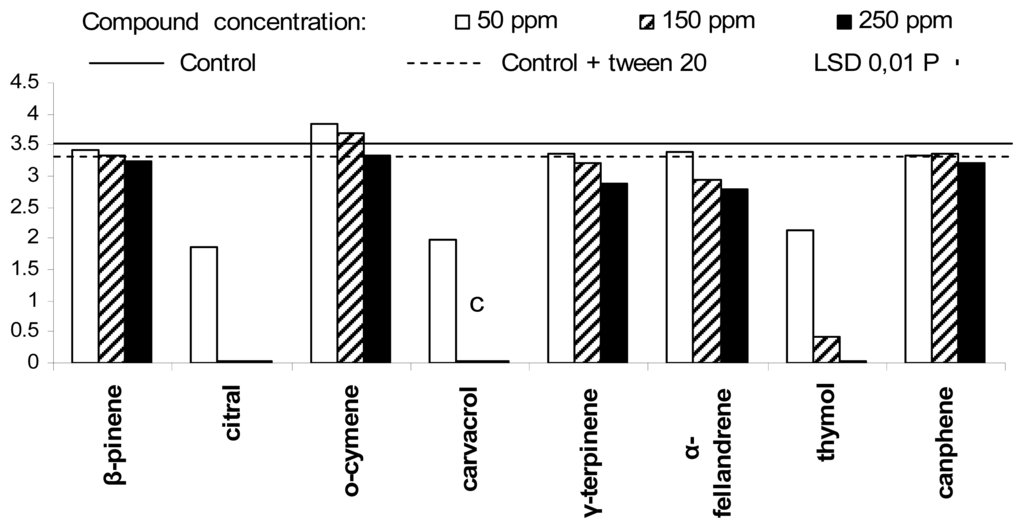 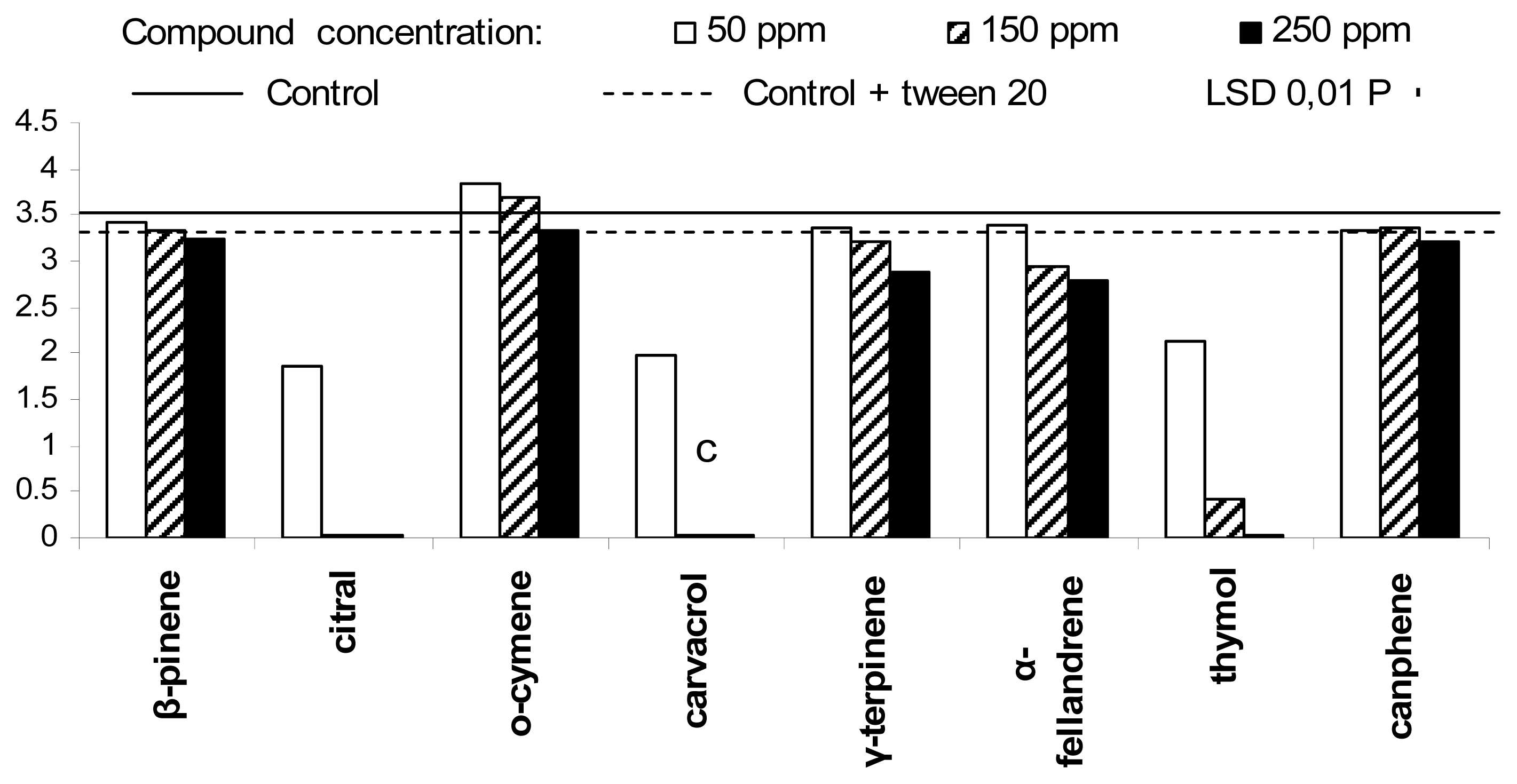 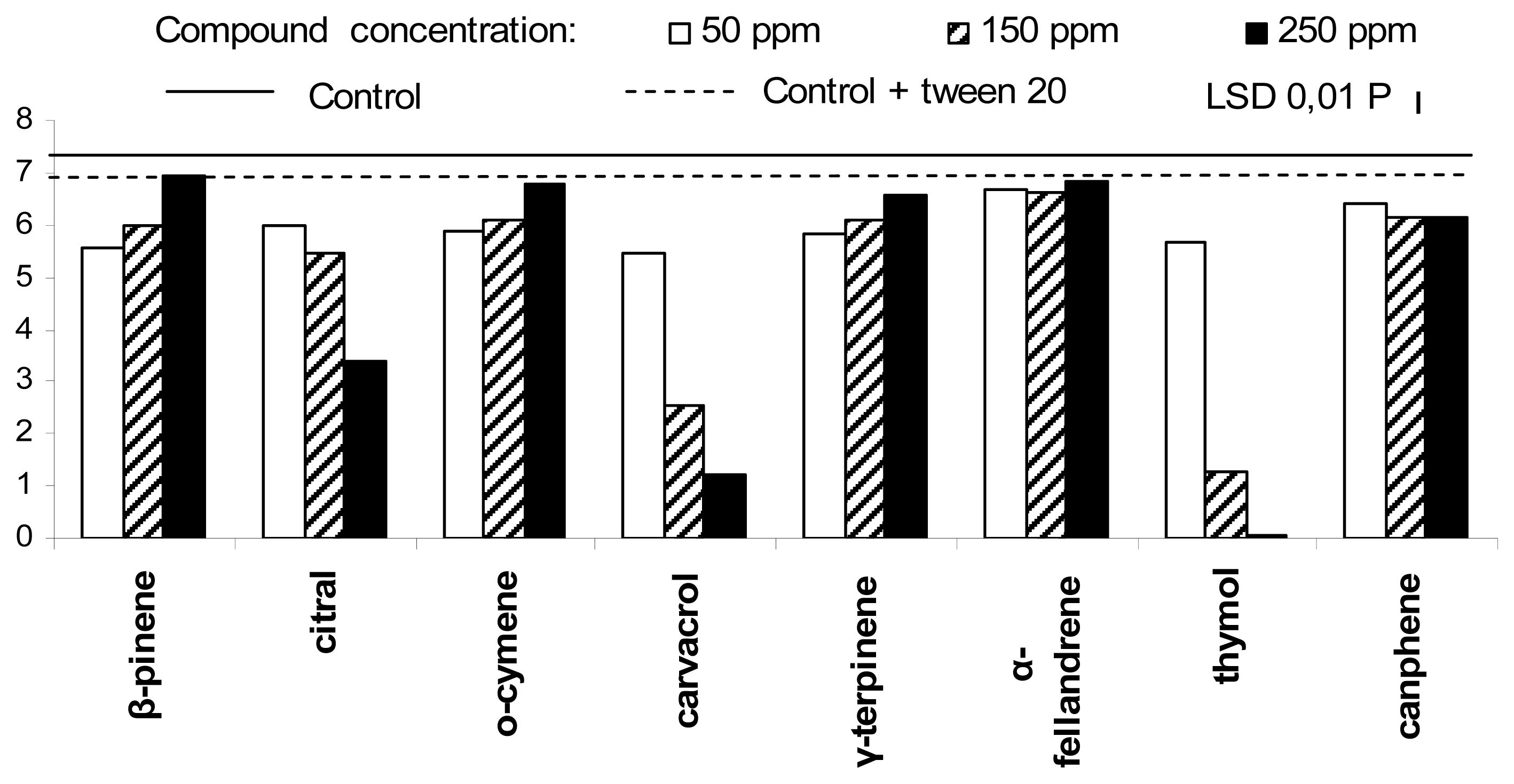 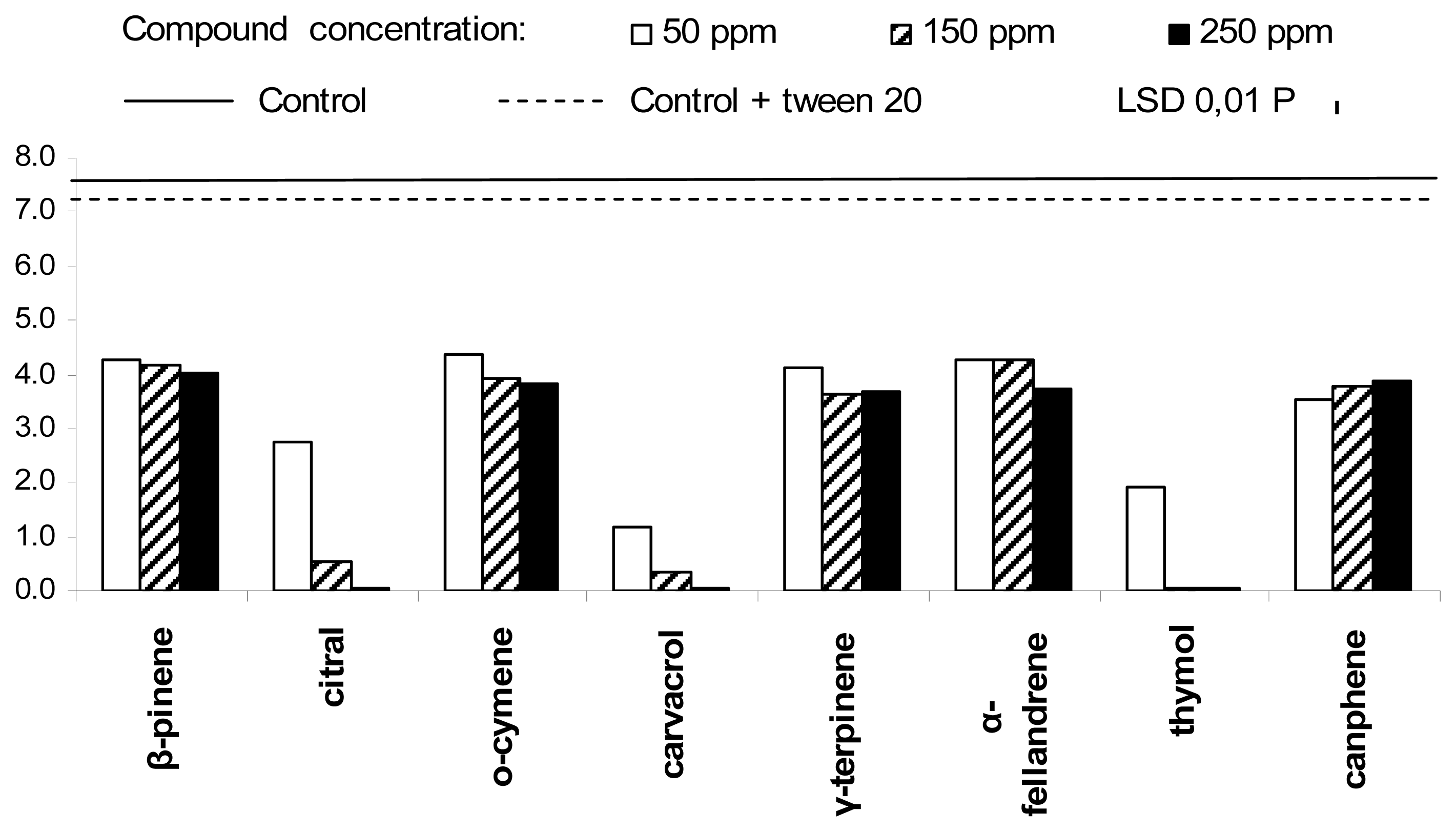 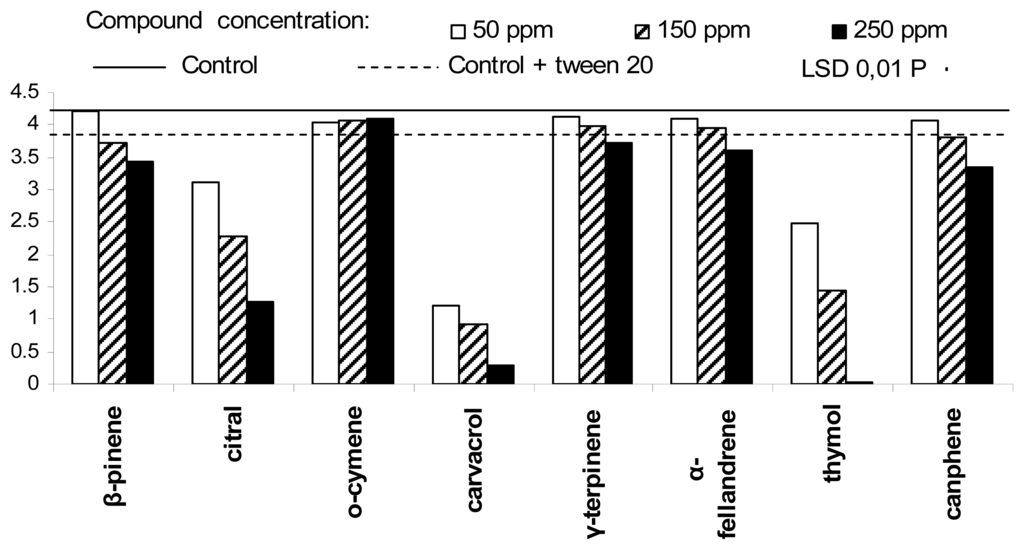