Effects of Curcumin on the Proliferation and Mineralization of Human Osteoblast-Like Cells: Implications of Nitric Oxide

Curcumin (diferuloylmethane) is found in the rhizomes of the turmeric plant (Curcuma longa L.) and has been used for centuries as a dietary spice and as a traditional Indian medicine used to treat different conditions. At the cellular level, curcumin modulates important molecular targets: transcription factors, enzymes, cell cycle proteins, cytokines, receptors and cell surface adhesion molecules. Because many of the curcumin targets mentioned above participate in the regulation of bone remodeling, curcumin may affect the skeletal system. Nitric oxide (NO) is a gaseous molecule generated from L-arginine during the catalization of nitric oxide synthase (NOS), and it plays crucial roles in catalization and in the nervous, cardiovascular and immune systems. Human osteoblasts have been shown to express NOS isoforms, and the exact mechanism(s) by which NO regulates bone formation remain unclear. Curcumin has been widely described to inhibit inducible nitric oxide synthase expression and nitric oxide production, at least in part via direct interference in NF-κB activation. In the present study, after exposure of human osteoblast-like cells (MG-63), we have observed that curcumin abrogated inducible NOS expression and decreased NO levels, inhibiting also cell prolifieration. This effect was prevented by the NO donor sodium nitroprusside. Under osteogenic conditions, curcumin also decreased the level of mineralization. Our results indicate that NO plays a role in the osteoblastic profile of MG-63 cells.
Keywords: osteoblast; nitric oxide synthase; nitric oxide osteoblast; nitric oxide synthase; nitric oxide

Curcumin ((1E,6E)-1,7-bis(4-hydroxy-3-methoxyphenyl)-1,6-heptadiene-3,5-dione or diferuloylmethane) is found in the rhizomes of the turmeric plant (Curcuma longa L.), a perennial herb belonging to the ginger family that is cultivated extensively in south and southeast tropical Asia [1]. Turmeric has been used for centuries as a dietary spice and as a traditional Indian medicine used to treat anorexia, rheumatism, sinusitis, hepatic disorders and inflammation [2]. It has also been recognized for its antiproliferative properties in cancer treatment [1]. In particular, curcumin has been shown to regulate the expression of genes implicated in cell proliferation, metastasis, chemotherapy resistance and angiogenesis [1,3]. The anti-neoplastic properties of curcumin have been exhibited in many types of malignancies, including breast cancer, colon cancer, kidney cancer, leukemia, prostate cancer, melanoma and osteosarcoma [1,4]. However, the potential of curcumin has not been systematically examined through multi-center, randomized, double-blind, placebo-controlled clinical trials [1].
At the cellular level, curcumin modulates important molecular targets: transcription factors (such as nuclear factor-κB, activating protein-1, β-catenin and peroxisome proliferator-activated receptor-γ), enzymes (cyclooxygenase-2,5-lipoxygenase and inducible nitric oxide synthase), cell cycle proteins (cyclin D1 and p21), cytokines (tumor necrosis factor-α, interleukin-1, interleukin-6 and chemokines), receptors (epidermal growth factor receptor, low-density lipoprotein receptor, estrogen receptor-α) and cell surface adhesion molecules [1,5–7]. Because many of the curcumin targets mentioned above participate in the regulation of bone remodeling, curcumin may affect the skeletal system. In fact, the effects of curcumin on osteoclasts (cells which resorb bone) and osteoblasts (cells responsible for bone formation) have previously been investigated in vitro[8–12] and in vivo[13–16].
Nitric oxide (NO) is a gaseous molecule generated from l-arginine during the catalization of nitric oxide synthase (NOS), and it plays crucial roles in catalization and in the nervous, cardiovascular and immune systems [17]. Three isoforms of NOS are recognized: neural NOS (nNOS or NOS-1), inducible NOS (iNOS or NOS-2) and endothelial NOS (eNOS or NOS-3) [18]. Human osteoblasts have been shown to express both iNOS and eNOS [19]. Several agonists, such as proinflammatory cytokines and bacterial lipopolysaccharides, increase iNOS expression, whereas eNOS activities are induced by stimulators, such as estradiol and estrogen, indicating that iNOS and eNOS may play a role in bone inflammation and physiology [19,20]. The exact mechanism(s) by which NO regulates bone formation remain unclear. It has been proposed that NO directly induces osteoblast proliferation [21], while others have demonstrated that NO stimulates osteoblast proliferation via the induction of prostaglandin E2 (PGE2) production [22]. Evidence from gene knock-out studies has shown that bone formation is, at least in part, mediated by nitric oxide (NO), because mice deficient in endothelial nitric oxide synthase (eNOS) and mice deficient in the eNOS downstream effector (cGMP)-dependent protein kinase (PKG) show bone abnormalities. Additionally, inducible NOS (iNOS)-null mice also show imbalances in bone osteogenesis and abnormalities in bone healing [23]. Curcumin has been widely described to inhibit iNOS expression and NO production, at least in part via direct interference in NF-κB activation [24,25]. Therefore, the aim of the present study was to test the hypothesis that the exposure of human osteoblast-like cells to curcumin may affect growth and mineralization by a mechanism partially regulated by NO.

2.1. Cell Proliferation and NO Levels

Cell proliferation was measured using the MTT assay (Figure 1a,b). Curcumin significantly decreased cell viability in a dose-dependent manner in MG-63 cells. A dose of 20 μM of curcumin decreased cell viability to below 80% after 24 h of culture and 30 μM of curcumin decreased viability to below 50% (p < 0.001). No significant differences were found after 10 μM curcumin exposure (p > 0.05) (Figure 1a). Thus, 10 μM curcumin was selected as the working concentration for the rest of the experiments. At the tested concentrations, L-NAME moderately affected cell viability (p < 0.05) (Figure 1b), while the combination of L-NAME and curcumin substantially decreased cell viability after 24 h of culture (p < 0.001 vs. control cells) (Figure 1b). Supplementation of MG-63 cultures with 0.2 mM SNP prevented the cell death observed after co-stimulation with L-NAME and curcumin (p > 0.05 vs. control cells) (Figure 1b).
As observed in Figure 2a, the nitrite concentration was measured in the supernatants of the cultured cells at 12 and 24 h post-stimulation. No significant difference vs. control cells was found at 12 h (p > 0.05 in all cases). After 24 h, cells cultured in the presence of either 1 mM L-NAME or 10 μM, curcumin had significantly decreased NO production (p < 0.001) (Figure 2a). Furthermore, the combination of both agonists abrogated NO production in MG-63 cells after 24 h of incubation (Figure 2a).

The results of the quantitative PCR assay of MG-63 cells cultured with either 10 μM curcumin or OM are shown in Figure 4. The rate of COLI mRNA expression remained constant and decreased from day 15 to day 21 of culture (p < 0.01). No significant differences were found in the rate of expression between control (OM) cells and curcumin-stimulated cells (p > 0.05) (Figure 4a). Similarly, the levels of OCN remained constant until day 15, when a significant (p < 0.01) increase was detected (Figure 4a). No significant differences were found between the rate of expression observed in control (OM) cells and curcumin-stimulated cells after 21 days of culture (Figure 4b).

Cell proliferation was determined by the MTT method. Osteoblasts were seeded at 1 × 104 cells/mL per well in a 96-well plate without FBS and cultured at 37 °C for 24 h. Subsequently, the medium was replaced with DMEM containing either curcumin (dissolved in ethanol) at the indicated doses (10, 20 or 30 μM), 1 mM L-NG-nitroarginine methyl ester (L-NAME) or 0.2 mM sodium nitroprusside (SNP) (both dissolved in DMEM) (all from Sigma, St. Louis, MO, USA). At the end of the treatments (24 h), the medium was replaced with DMEM containing 0.5 mg/mL MTT (Sigma) and incubated for 4 h. Cellular reduction of the MTT tetrazolium ring resulted in the formation of a dark-purple water-insoluble deposit of formazan crystals. After incubation, the medium was aspirated, and DMSO was added to dissolve the formazan crystals. Absorbance was measured at 570 nm with a spectrophotometer.

Nitrite production was measured using the Griess reaction. After a 10 min incubation at 37 °C in the dark, absorbance was measured at 540 nm. A blank was prepared in the absence of cells, and its absorbance was subtracted from the sample absorbance. Sodium nitrite was used as a standard to build a calibration curve. Nitrite concentration was expressed as a percentage of the unstimulated cell nitrite concentration.

RNA was purified from cells (5 × 106) used in various experiments. Total RNA was isolated using the TRI REAGENT kit according to the manufacturer’s instructions (Sigma, St. Louis, MO, USA). Briefly, 1 mL of TRI REAGENT was added directly to the culture dish. The cell lysates were transferred by pipetting to an Eppendorf tube and incubated for 5 min at room temperature, and 0.2 mL of chloroform per 1 mL of TRI REAGENT was added to the tubes. The tubes were vortexed for an additional 15 min and incubated for 15 min at room temperature (RT). The resulting mixture was centrifuged at 12,000g for 15 min. The aqueous phase was transferred to a fresh tube, and 0.5 mL of isopropanol was added. Samples were incubated for 10 min at RT and centrifuged at 12,000g for 15 min. Finally, the supernatant was removed, and the RNA pellet was washed twice with 1 mL 75% ethanol and once with 1 mL of 100% ethanol.

For the ALP activity assay, the cells were incubated with 4 mg/mL of a ρ-nitrophenyl phosphate solution (Sigma, St. Louis, MO, USA) at 37 °C for 30 min. ρ-Nitrophenol (PNP) production in the presence of ALP was measured by monitoring the solution absorbance at 405 nm using a spectrophotometer. The protein content of the extracts was measured using the Bio-Rad DC protein assay, and ALP activity was expressed as μmol/min/mg protein.

Alizarin red-S (AR-S) staining is a common histochemical technique used to detect calcium deposits in mineralized tissues and cultures, and positive AR-S staining for calcium has been shown to represent calcium phosphate and osteoblast culture mineralization. Control group cells were incubated in osteogenic medium (OM) containing 10% FBS, 50 g/mL ascorbic acid and 10 mM 2-glycerophosphate. The experimental groups were incubated with 10 μM curcumin, 1 mM L-NAME or both. After incubation for 21 days, cells were collected and stained with alizarin red. The cells were washed with PBS and fixed in 70% ethanol for 1 h at 4 °C. After additional washing in PBS, they were incubated in 0.4% alizarin red-S in water for 10 min at room temperature, followed by a final incubation in PBS for 15 min. The stained cells were photographed and then subjected to a quantitative destaining procedure using 10% (w/v) cetylpyridinium chloride in 10 mmol L−1 sodium phosphate (pH 7.0) for 30 min at room temperature. Absorbance was measured at 562 nm on a spectrophotometer, and the results were expressed as a percentage of the control (unstimulated) cell absorbance.

The results were expressed as the means ± SEM. Statistical analyses were performed with ANOVA and Fisher’s exact test, when appropriate. The P value cutoff for statistical significance was defined as p < 0.05. For the single agonist experiment, the differences between group means were evaluated by Student’s t test (SPSS statistical package, version 19.0, IBM-SPSS: Chicago, IL, USA, 2010). Differences were considered statistically significant when p < 0.05.

In conclusion, curcumin exposure of MG-63 cells modulates osteoblastic differentiation by a mechanism partially related to the inhibition of NO production.
The results described in this report can be summarized as follows. (1) The treatment of MG-63 cells with curcumin abrogated iNOS expression and decreased NO levels. (2) Treatment with both curcumin and L-NAME decreased NO levels, inhibiting cell proliferation. This effect was prevented by the NO donor SNP, thereby indicating a role for NO as a regulatory factor in MG-63 proliferation. (3) Under osteogenic conditions, the incubation of MG-63 cells with both curcumin and L-NAME decreased the level of mineralization, indicating that NO plays a role in the osteoblastic profile of MG-63 cells. 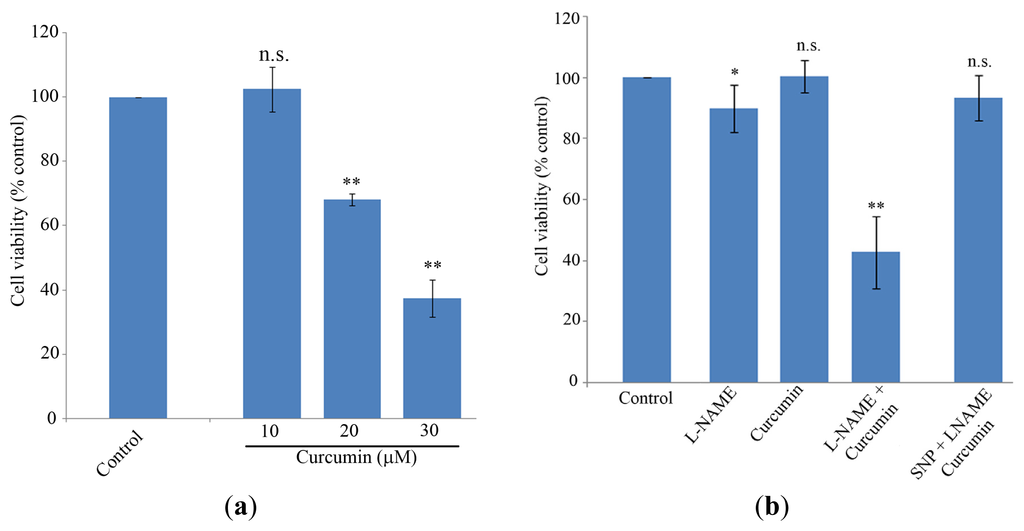 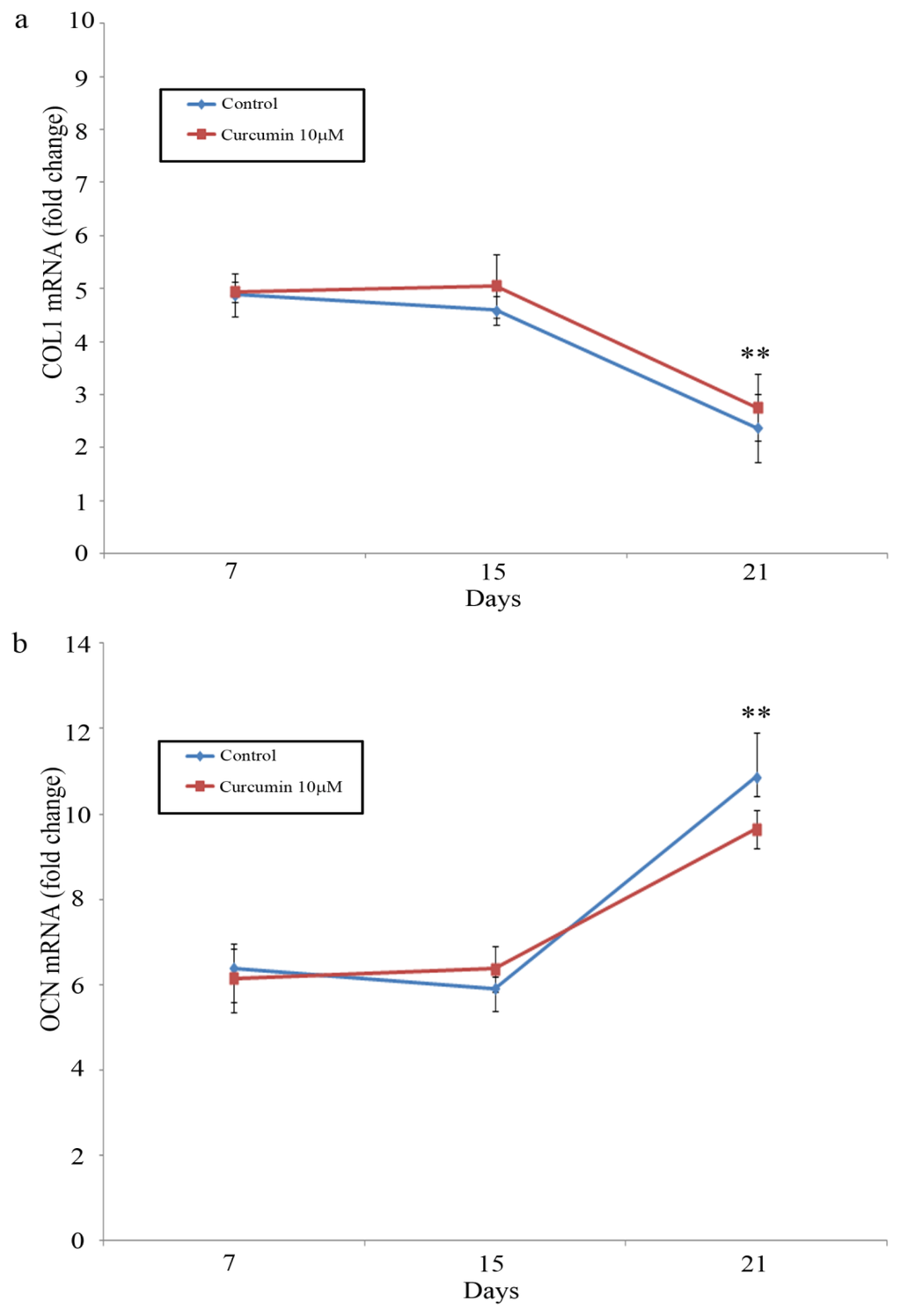