Nanotechnology describes the creation and utilization of materials, devices, and systems through the control of nanometer-sized materials and their application to physics, chemistry, biology, engineering, materials science, medicine, and other endeavors. In particular, intensive efforts are in progress to develop nanomaterials for medical use as agents that can be targeted to specific organs, tissues, and cells. For example, magnetic nanoparticles (MNPs) are being used clinically as contrast agents for magnetic resonance imaging (MRI) (Table 1). MRI is a noninvasive technique that can provide real-time high-resolution soft tissue information [1,2]. MRI image quality can be further improved by utilizing contrast agents that alter proton relaxation rates [3–8]. MNP-based drug delivery systems (DDS) [9–11], and treatments of hyperthermia [12–21], using MNPs have been studied for over a decade. Furthermore, researchers have reported that MNPs have been useful in hyperthermic treatment for various cancers in vivo [22–31]. Nanotechnology-based anti-cancer agent DDS have already been approved, such as pegylated liposomal doxorubicin (DOXIL) for ovarian cancer [32–37]. MNPs have been used effectively as transfection reagents for introducing nucleic acids (plasmids or siRNAs) [38–53], or viruses (retrovirus, or adenovirus) [44,54–56] into cells. Our own research is focused on MNP-mediated gene delivery systems (called as “Magnetofection”).

Gene delivery techniques efficiently introduce a gene of interest in order to express its encoded protein in a suitable host or host cell. Currently, there are three primary gene delivery systems that employ viral vectors (retroviruses and adenoviruses), nucleic acid electroporation, and nucleic acid transfection. These systems vary in efficacy (Table 2). Gene delivery by viral vectors can be highly efficient (80–90%) but may insert viral vector nucleic acid sequences into the host genome, potentially causing unwelcome effects, such as inappropriate expression of deleterious genes. Electroporation is also a highly efficient technique for introducing foreign genes into a host (50–70%); however, half of the recipient cells die due to the electrical stimulation. Transfection reagents do not efficiently deliver nucleic acids into cells (20–30%); however, cell viability is largely preserved and the method is safe enough for clinical use. Therefore, this method holds relatively more promise for medical applications, provided that its efficiency can be improved. MNPs are already in use by basic researchers to increase transfection efficiencies of cultured cells. Thus, MNP-nucleic acid complexes are added to cell culture media and then onto the cell surface by applying a magnetic force (Figure 1).
Oxide nanoparticles mixed with high magnetic moment compounds such as CoFe2O4, NiFe2O4, and MnFe2O4 exhibit superior performance compared to other magnetic materials [62,63]. However, these nanoparticles are highly toxic to cells, limiting their use for in vivo, and in vitro biomedical applications [64–67]. However, iron oxides such as magnetite (Fe3O4) and maghemite (γ-Fe2O3), in particular, possess high magnetic moments, are relatively safe, and currently in clinical use as MRI contrast agents [57–61]. These iron oxide based-magnetic materials are also suitable for biomedical applications. Fe3+ is widely dispersed in the human body so leaching of this metal ion from nanoparticles should not reach toxic concentrations [68,69]. As a result, maghemite is a popular choice for MNPs used biomedical applications. It is very important to modify the surface of MNPs so that they can be used for biomedical applications. Thus, MNPs are coated with compounds such as natural polymers (proteins and carbohydrates) [70–75], synthetic organic polymers (polyethylene glycol), polyvinyl alcohol, poly-l-lactic acid) [72,76–78], silica [79], and gold [80,81]. These surface coating agents prevent nanoparticle agglomeration, cytotoxicity, and add functionality. MNPs agglomerate readily in aqueous solutions around pH 7 [82], and it is difficult to control the properties and amounts of agglomerated MNPs. The greater toxicity of MNPs compared to those of microparticles can be attributed to their high surface to volume ratio [83]. Coating agents prevent the leaching of potentially toxic components from MNPs. In fact, the cytotoxicity of uncoated NiFeO4 MNPs is dramatically decreased by coating with cationic polymer, polyethylenimine (PEI) [84–86]. PEI, a cationic polymer, is widely used for nucleic acid transfection [87–89] and also serves as a nanoparticle dispersant [90]. PEI-coated MNPs enhance transfection efficiency [38,41,42,44–46,48,49,51,54,55].

The great promise of gene therapy for treating devastating, incurable diseases has yet to be realized. Less toxic and more efficient systems will be required, and robust research efforts in this regard are currently underway. Rapid advances have been made in adapting nanoparticle technology for basic biomedical and clinical research. Nanoparticles are already being used clinically to enhance MRI imaging, and drug delivery for cancer patients. Our own research has focused on gene delivery systems for autologous cell transplantation therapy, in which the patient’s own cells are transfected with the gene required to correct their condition. In particular, our laboratory and those of others have aimed to optimize magnetofection by developing better nanoparticle coating agents [38,40–51,53–55]. Nanoparticle size is another important parameter but there were few reports addressing this subject [111]. Since cells endocytose MNPs [51,100,101], MNP size has significant implications for transfection efficiency. PEI-MNPs forms magnetoplex, which increased its influence on the magnetic force. Furthermore, MNP size influences cytotoxicity [112], and more studies on this aspect of MNP technology will be crucial for enhancing transfection efficiencies.
The two research groups reported the important developments in the field of magnetofection. The first is the influence of the oscillating magnetic force on transfection [113,114]. The second is the use of MNP-heating, and -transfection [15,16]. The purpose of these studies have increased the efficiency of transfection, and/or induced a fever by oscillating MNPs for hyperthermia. The latter, a combination of MNP-heating and -transfection, was expected to research the efficacy of both hyperthermia and gene delivery. In the future, the studies of magnetofection using the oscillating MNPs could be developed as a novel methodology.
We found that PEI is an excellent cationic polymer for dispersing MNPs and that its water solubility, stability, and low toxicity contribute to enhancing transfection efficiency [95,115–119]. Derivation of iPSCs with the use of non-viral gene delivery using PEI max MNPs should provide a powerful tool for treating diseases such as Alzheimer’s, Huntington’s, and Parkinson’s by autologous cell transplantation. Reprogramming cells requires the action of multiple transcription factors. Our studies demonstrate that MNP-mediated transfection efficiently introduces at least three genes in a single cell. This indicates the feasibility of our system for one-step reprogramming. 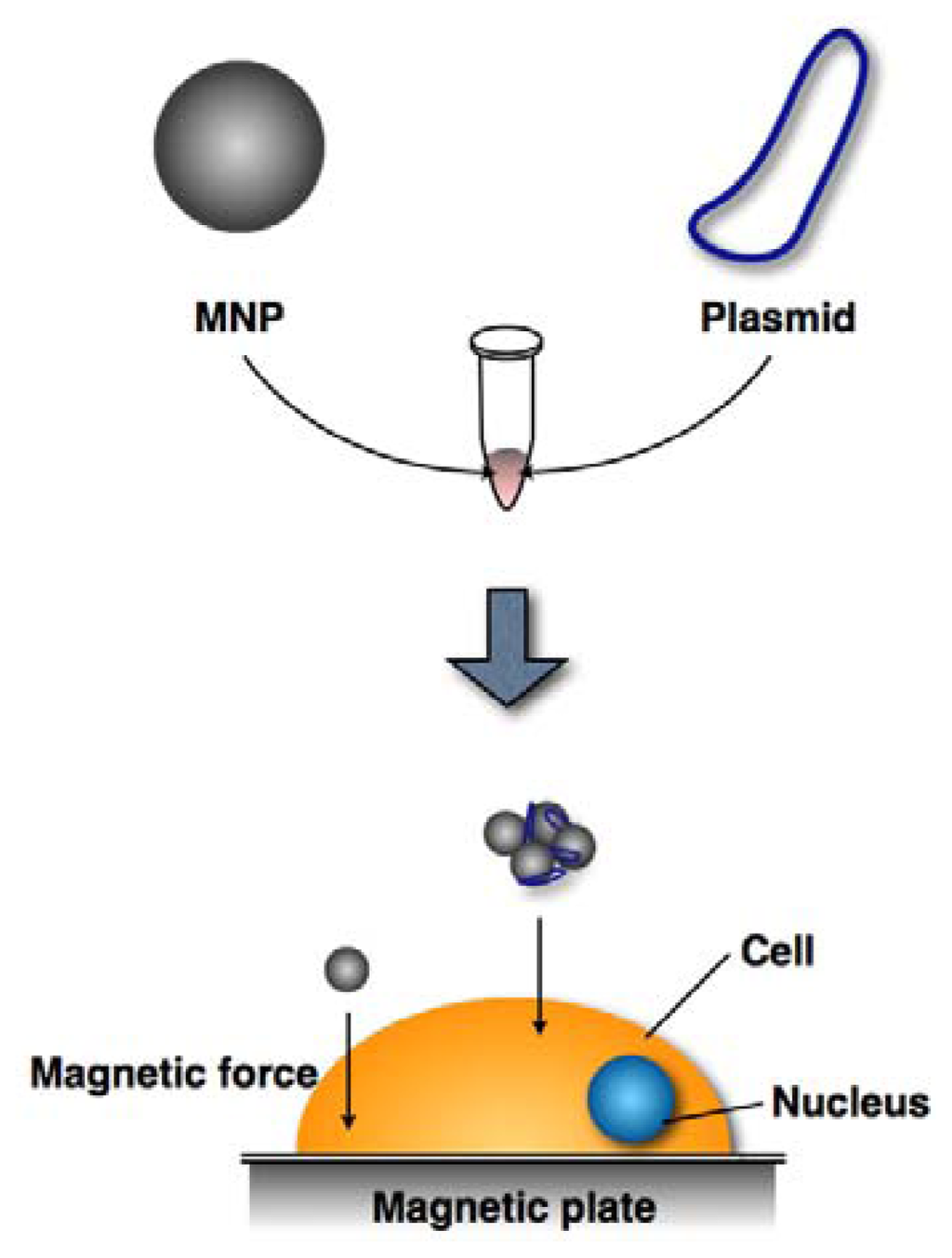 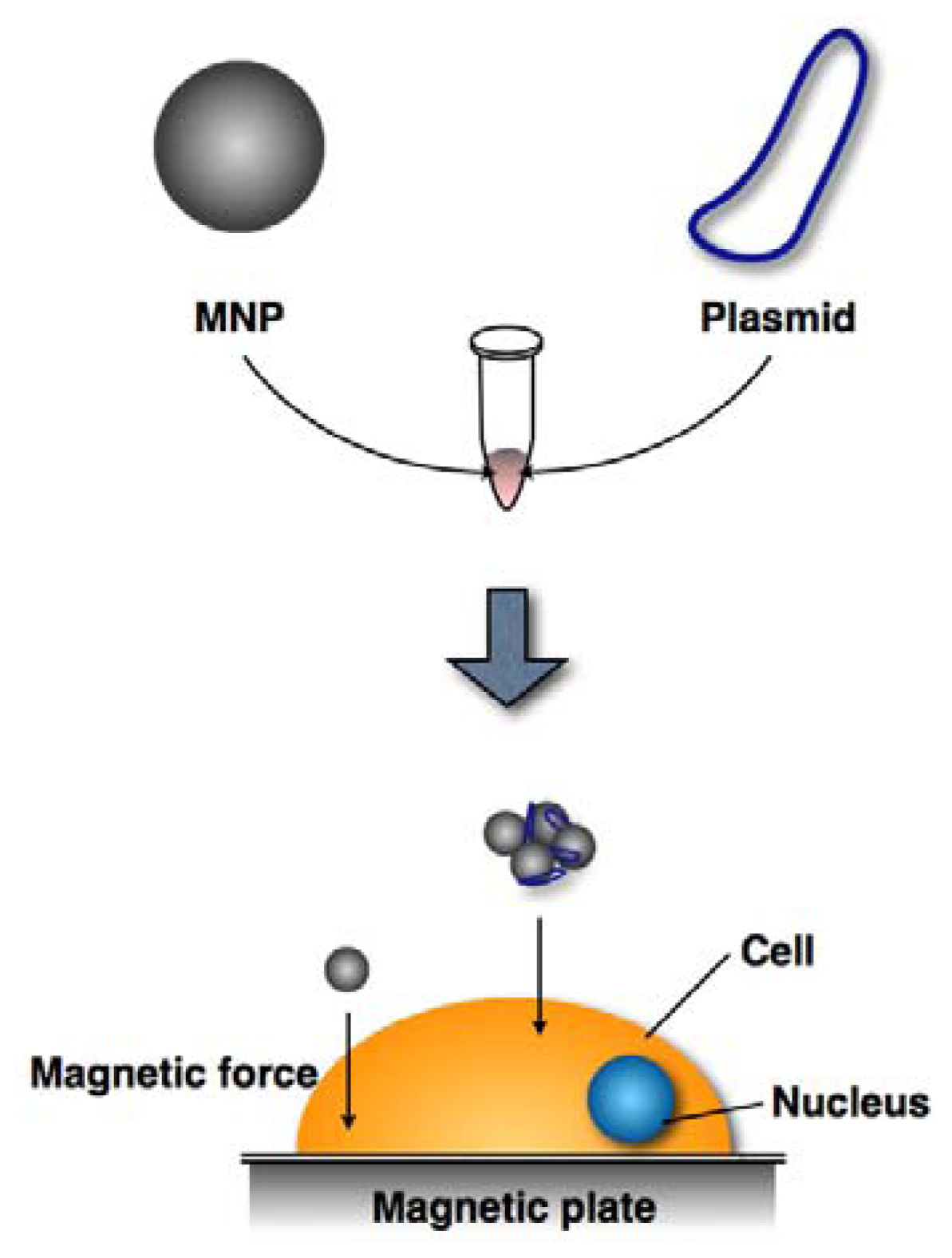 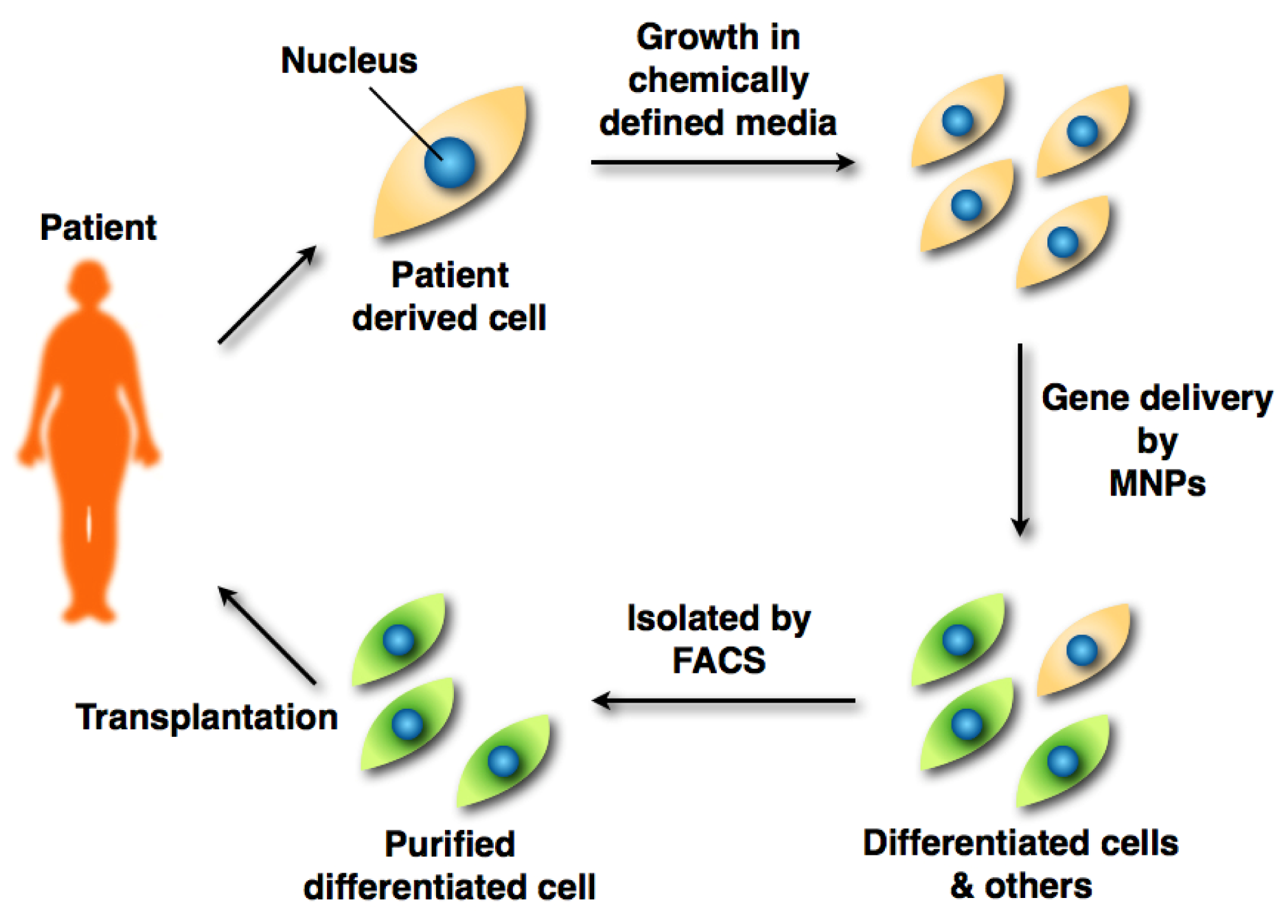 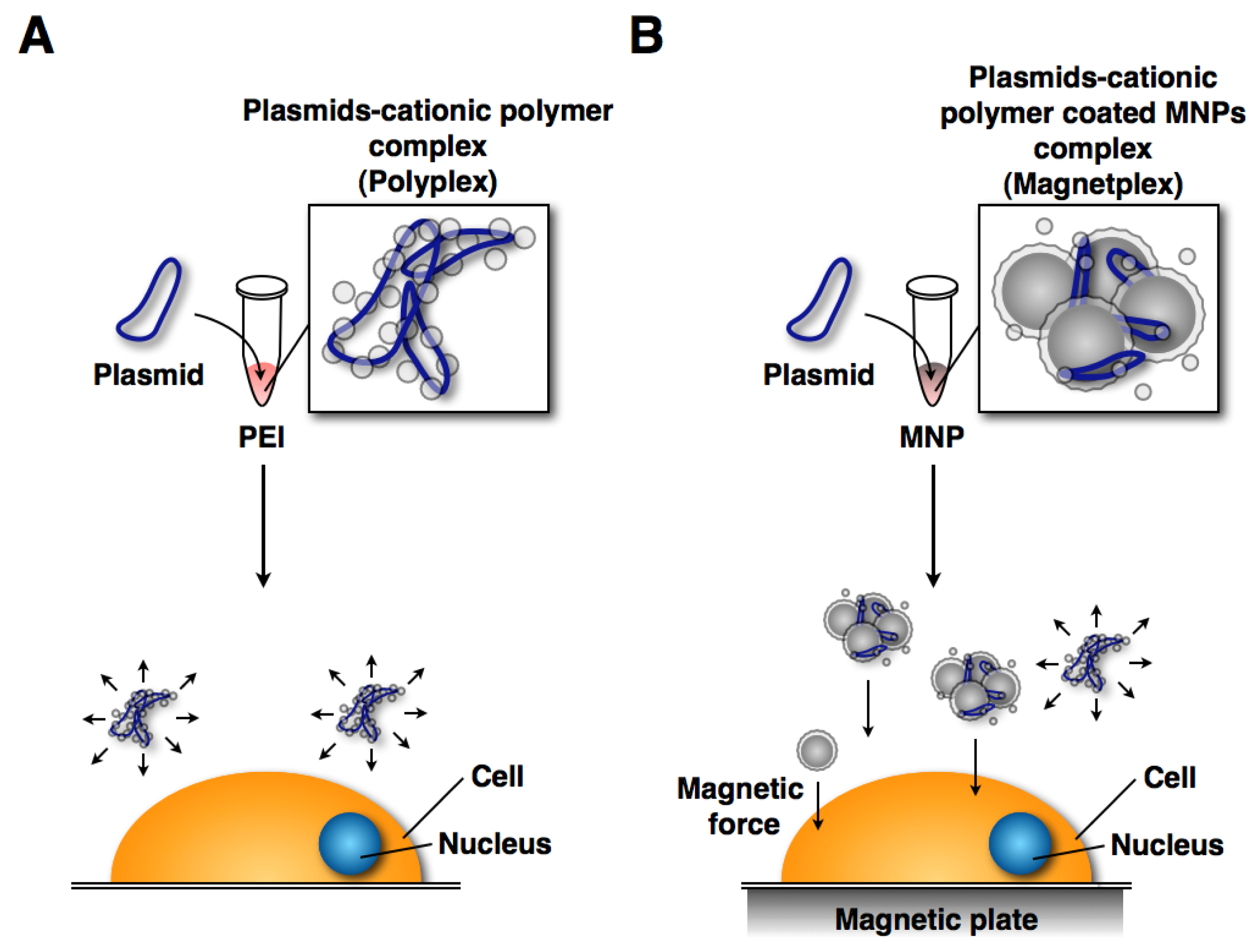 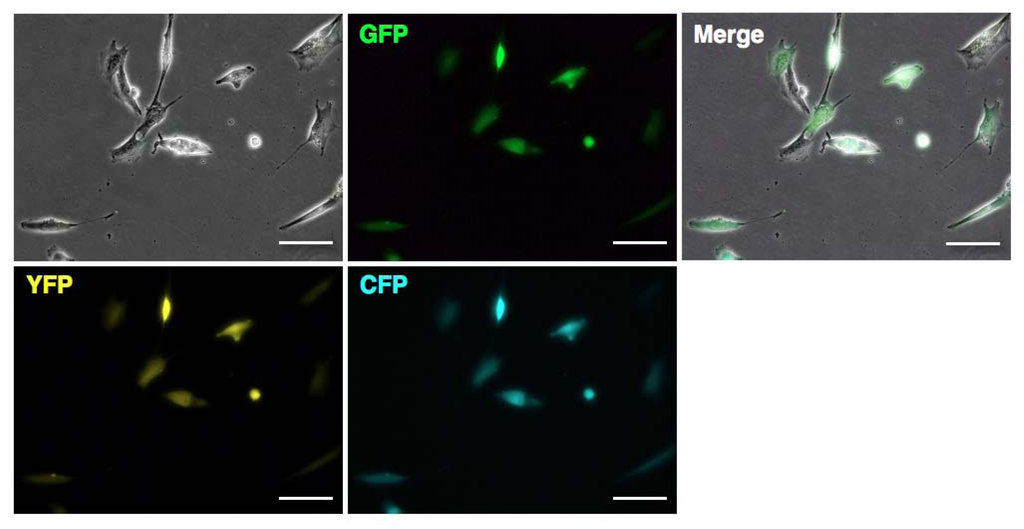