The temperature-dependent hydrolysis and solubility of chitosan in sulfuric acid solutions offer the possibility for chitosan extraction from zygomycetes mycelia and separation from other cellular ingredients with high purity and high recovery. In this study, Rhizomucor pusillus biomass was initially extracted with 0.5 M NaOH at 120 °C for 20 min, leaving an alkali insoluble material (AIM) rich in chitosan. Then, the AIM was subjected to two steps treatment with 72 mM sulfuric acid at (i) room temperature for 10 min followed by (ii) 120 °C for 45 min. During the first step, phosphate of the AIM was released into the acid solution and separated from the chitosan-rich residue by centrifugation. In the second step, the residual AIM was re-suspended in fresh 72 mM sulfuric acid, heated at 120 °C and hot filtered, whereby chitosan was extracted and separated from the hot alkali and acid insoluble material (HAAIM). The chitosan was recovered from the acid solution by precipitation at lowered temperature and raised pH to 8-10. The treatment resulted in 0.34 g chitosan and 0.16 g HAAIM from each gram AIM. At the start, the AIM contained at least 17% phosphate, whereas after the purification, the corresponding phosphate content of the obtained chitosan was just 1%. The purity of this chitosan was higher than 83%. The AIM subjected directly to the treatment with hot sulfuric acid (at 120 °C for 45 min) resulted in a chitosan with a phosphate impurity of 18.5%. View Full-Text
Keywords: fungal chitosan; phosphate release; Rhizomucor pusillus; sulfuric acid fungal chitosan; phosphate release; Rhizomucor pusillus; sulfuric acid
►▼ Show Figures 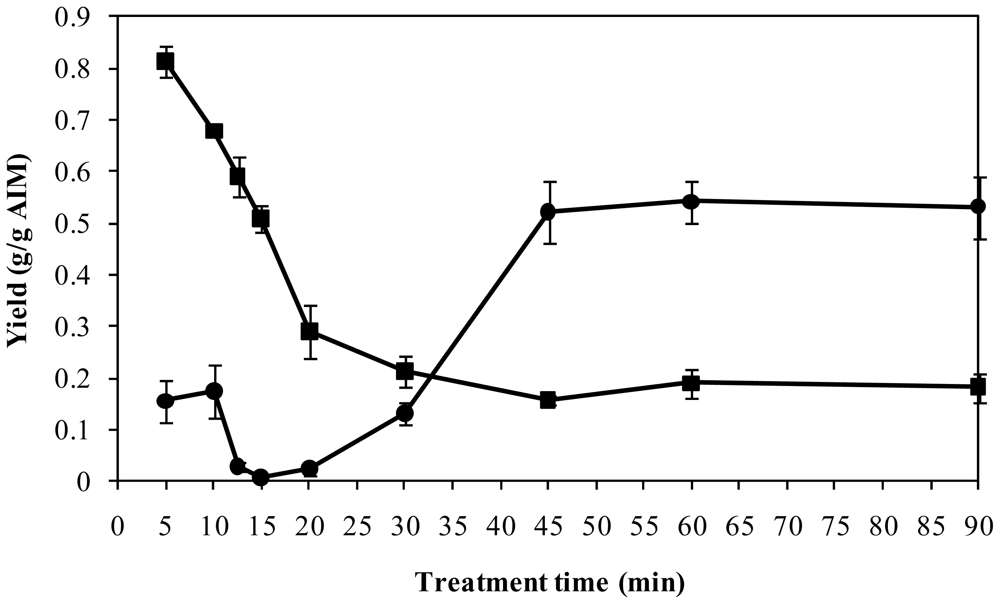