Triterpenoids are among the bioactive components of Chaga, the sterile conk of the medicinal fungus Inonotus obliquus. Supercritical fluid extraction of Chaga triterpenoids was carried out with supercritical CO2, while a modified Folch method was used as a comparison. Three temperature-pressure combinations were tested varying between 314–324 K (40–50 °C) and 281–350 bars, using time- and volume-limited extractions. Six triterpenoids were identified with GC-MS and quantified with GC-FID: ergosterol, lanosterol, β-sitosterol, stigmastanol, betulin, and inotodiol. The Folch extraction resulted in recovery of trametenolic acid, which was not extracted by supercritical CO2. Inotodiol was the major triterpenoid of all the extracts, with a yield of 87–101 mg/100 g and 139 mg/100 g, for SFEs and the Folch method, respectively. The contents of other major triterpenoids, lanosterol and ergosterol, varied in the ranges 59–63 mg/100 g and 17–18 mg/100 g by SFE, respectively. With the Folch method, the yields were 81 mg/100 g and 40 mg/100 g, respectively. The highest recovery of triterpenoids with SFE in relation to Folch was 56% and it was obtained at 324 K (50 °C) and 350 bar, regardless of extraction time or volume of CO2. The recoveries of lanosterol and stigmastanol were unaffected by SFE conditions. Despite the lower yield, SFE showed several advantages including shorter extraction time and less impact on the environment. This work could be a starting point for further studies on green extraction methods of bioactive triterpenoids from Chaga. View Full-Text
Keywords: Inonotus obliquus; SFE; supercritical fluids; triterpenoids; inotodiol Inonotus obliquus; SFE; supercritical fluids; triterpenoids; inotodiol
►▼ Show Figures 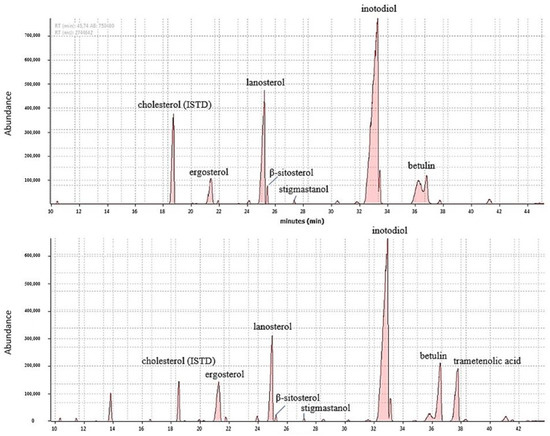